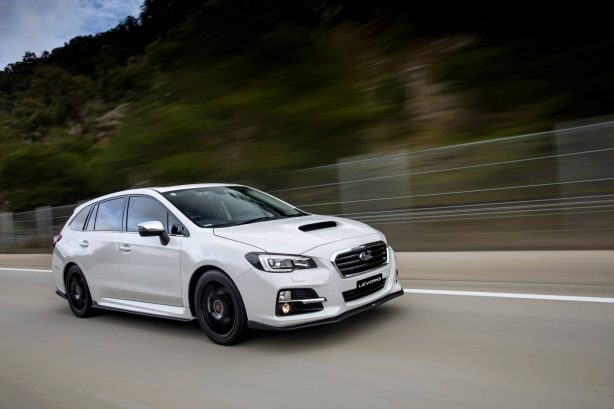 Billed as the spiritual successor to the much-missed Liberty GT wagon, the Levorg is powered by the same turbocharged 2.0-litre direct injected engine found under the WRX delivering 197kW at 5,600rpm and 350Nm of torque from 2,400-5,200rpm.

Customers of the 2.0GT-S can also order the $4,000 Spec B option pack, which adds multiple performance parts from the STI stable, including:

Inside, the dashboard is lifted straight from the WRX sedan and features soft-touch interior trim and a 6.2-inch touchscreen.

The Levorg 2.0GT-S and 2.0GT-S Spec B are available with a choice of Black or Bright Pearl interior leather trim colour, both with blue stitching. They are also equipped with an electric sunroof with tilt up function.

Outside, the front half of the car is pure WRX, with Subaru’s hexagonal grille (dark metal paint finish on the 2.0GT and black on the 2.0GT-S) and hawk eye LED headlights with daytime running lights. The front bumper edges and bottom section are designed for optimum aerodynamic performance, while the front indicators and fog lights feature chrome-style apertures.

The rear half has been completely redesigned, with a cargo door opening maximised for easy access and load carrying. There’s also a rear spoiler, matte-black rear diffuser and dual exhausts.

Like the Subaru WRX, the Levorg scores a maximum 5-start ANCAP rating.