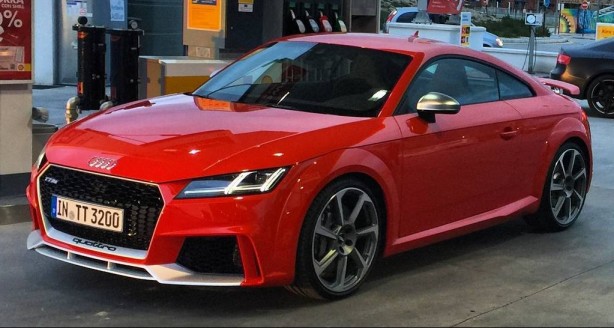 The 2017 Audi TT RS has been caught completely undisguised at a petrol station in Granada, Spain.

The model appears to be a production model out on a commercial shoot, judging from the number plate on the car.

As you can see from the spy shot, the TT range-topper sports a more aggressive front fascia, complete with a deeper, honeycomb front grille flanked by a pair of large air intake. An obligatory ‘TT RS’ badge is seen on the grille, along with ‘quattro’ branding at the bottom.

Along the side, the coupe’s side sills also look chunkier than the standard model, while the seven-spoke alloy wheels look brand new. There are no shots of the rear of the car, but we can expect a pair of oval tailpipes, which is a trademark of Audi’s RS models.