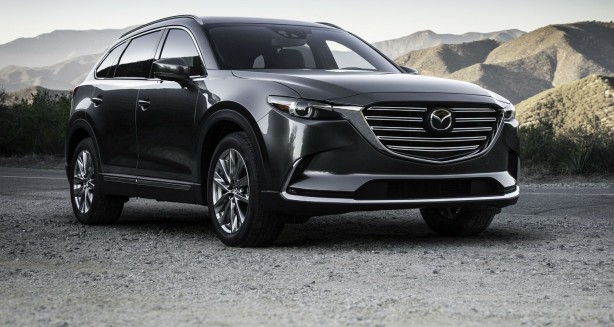 Mazda’s all-new seven-seater SUV will arrive later this year bringing with it an all-new range topper variant; the Azami.

For the first time, the new CX-9 will be available in four grades. Top down these include the flagship Azami, high-grade GT, mid-spec Touring and entry-level Sport. The four variants bring the CX-9 in line with the four grades offered on the Mazda CX-5 and CX-3. All four CX-9 variants will be offered in both Front-Wheel Drive (FWD) and All-Wheel Drive (AWD) drivetrains.

The CX-9 will be powered by a 2.5-litre turbocharged SkyActiv engine producing 170kW and 420Nm of torque. Mazda also claims the engine is flexible on fuels, it will happily sip away at either 91-octane unleaded or E10, on both fuels power output will be identical. Almost more impressive is the claimed fuel consumption of just 8.4 L/100km for the FWD and 8.8 L/100km for the AWD. This represents an improvement of almost 25% over the outgoing model. The low fuel consumption of the SUV is largely attributed to the vehicles i-stop and i-ELOOP technology.

i-stop aims to save fuel by switching off the engine when the vehicle comes to a stop, restarting when the driver takes their foot off the brake. Further improving fuel economy is the company’s i-ELOOP capacitor-based brake energy generation system. The energy recuperated by the system is stored and can be later used to power the vehicle’s electrical system.

The CX-9 also features a range of i-ACTIVSENSE advanced safety technologies, the i-ACTIV AWD system, and the ‘KODO – Soul of Motion’ design language.

“When the Brand-New Mazda CX-9 arrives, thanks to the strength of the range and the significantly improved fuel economy figures, there is certainly something for everyone,” said Mazda Australia marketing director Alastair Doak.

Pricing and specification of the all-new Mazda CX-9 will be released closer to local launch.