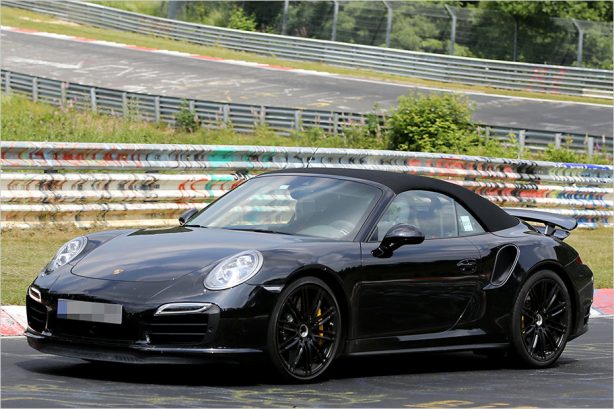 Only 2 months away from launch, the 2014 Porsche 911 Turbo Cabriolet has been caught doing final test runs at the infamous Nurburgring circuit in Germany. The new 911 Turbo drop-top is scheduled to be unwrapped at the 2013 Frankfurt Motor Show in September, alongside the new Porsche 911 Turbo and Turbo S.

Like its coupe sibling, two versions will be available – the 911 Turbo Cabriolet and the 911 Turbo S Cabriolet. Both variants will be powered by a turbocharged 3.8-litre flat-six engine with the unit in the Turbo developing 383kW (520hp) and 648Nm of torque, while the Turbo S develops 412kW (560hp) and 699Nm of torque. 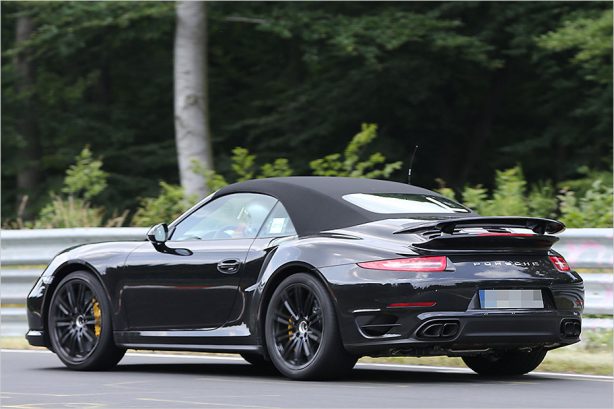 Both engine versions feature automatic stop/start function, slashing fuel consumption figure by up to 16 percent. Power is sent to all four wheels via a 7-speed dual-clutch PDK transmission and a sophisticated all-wheel-drive system with electronically controlled and activated multi-plate coupling.

All 911 Turbo variants come with adaptive spoiler that extends automatically at 120 km/h, which can also be manually activated.