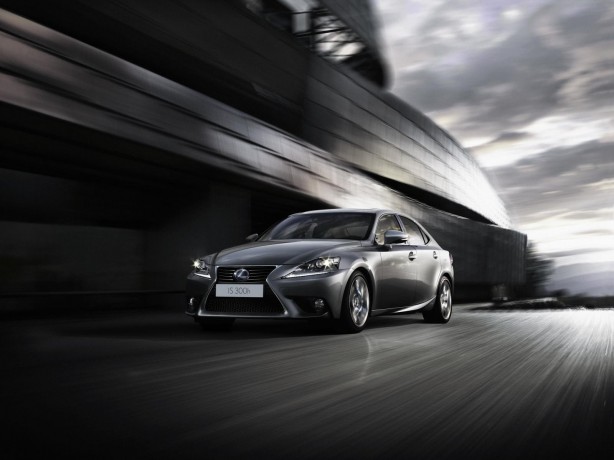 Following the release of the 2014 Lexus IS first official photos last week, the boldly styled compact executive from Lexus has been revealed in all its glory with the release of new photos of the whole IS range.

Making its global debut at the 2013 Detroit Auto Show (January 14-27), the all-new Lexus IS boasts a radical design characterised by sweeping lines and the company’s signature spindle grille flanked by distinctive headlamps with L-shaped Daytime Running Lights – now located independently below the headlamps.

For the first time, a new hybrid version called the IS300h will join the rest of the IS range – IS250, IS350 and IS350 F-Sport. The new IS is expected to arrive in Australia in the third quarter of this year, including the IS300h.

Check out the full gallery after the press release below.

DETROIT (Jan. 15, 2013) – Lexus today unveiled the all-new 2014 IS sedan at the North American International Auto Show. IS will be available in rear- and all-weather drive versions of the IS 250 and IS 350, a further evolution of F SPORT available across the entire model range, and for Europe, Japan, and select international markets, the IS 300h, the first IS to feature Lexus Hybrid Drive.

Driving performance isakey selling point in the sport sedan segment. In conjunction with a bold new design including the Lexus spindle grille, the all-new IS has been painstakingly engineered to have excellent dynamic capabilities to provide an exceptionaldriving experience. 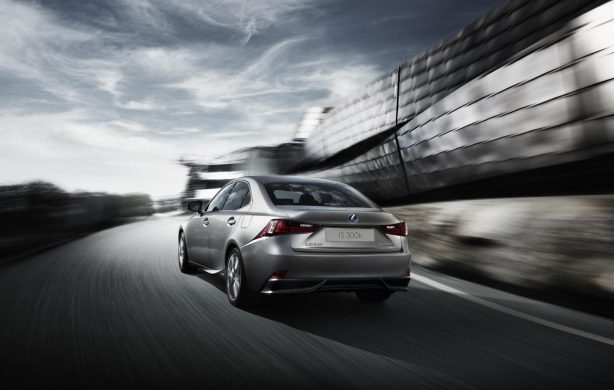 “I adopted an entirely different approach to the development of the all-new IS,” said Junichi Furuyama, IS chief engineer. “Specifically, it was to make an entertaining driving experience a major premise behind all aspects of performance.

“The conventional approach involves developing each individual aspect in the hope that they will combine to offer an engaging driving experience. By contrast, development of the new IS flipped this process on its head, first establishing the pleasurable driving experience owners desire, and then developing the individual performance elements to support it.”

Every aspect of the IS has been engineered with a renewed focus on engaging performance, agile handling, accurate response to driver input and highly communicative feedback.

“The IS has always been precise and fun to drive,” said Mark Templin, Lexus group vice president and general manager. “The all-new IS kicks it up a notch with true sport sedan driving dynamics, state of the art onboard technologies, and an all-new design that makes it look fast even when it’s standing still.”

Incorporating several Lexus-first features and technical innovations, the IS showcases an interior design with all the refinement and quality expected of a Lexus, plus a focused driver’s environment, a significant improvement in rear seat comfort and spaciousness, and a larger, more convenient trunk.

IS adopts the Drive Mode Select system which offers up to four switchable driving modes- ECO, NORMAL, SPORT and SPORT S+ (S+ available on IS 350 only) – to optimize vehicle systems to suit the driver’s preferred combination of fuel economy, comfort, performance and handling characteristics. 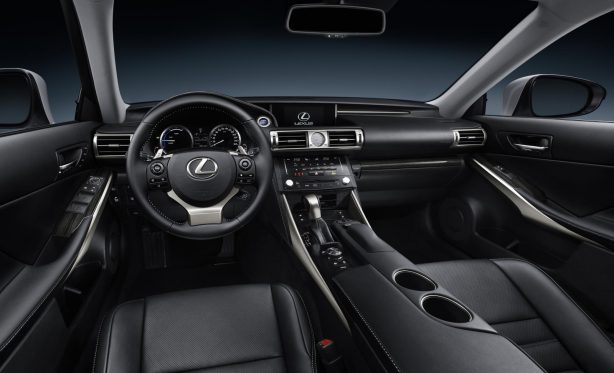 The IS 350 RWD features the eight-speed, Sport Direct Shift (SPDS) automatic transmission from the IS F high performance sedan with quicker shifts, full torque converter lockup and throttle blips in manual mode. The new IS is the first Lexus model to adopt G force Artificial Intelligence (G-AI) control in Sport mode. This system automatically selects the optimal gear and downshift pattern in response to G force, and maintains the selected gear through a corner.

Chassis/Body/Suspension/Brakes
Driving enjoyment was at the heart of the new IS development program, and every aspect of the new Lexus sedan’s driving dynamics has been carefully engineered to that end.

The double wishbone front suspension system has been revised, offering a twenty percent increase in sway rigidity. The rear adopts a new multi-link suspension system from the GS. Fine tuning has resulted in outstanding grip performance and excellent response to steering inputs. Separate mounting of the spring and shock absorber maximizes trunk space.

Steering feel and feedback is key to an enjoyable driving experience, and the new IS benefits from a steering gear box based on that of the GS sedan, incorporating a variety of tuning techniques. The structure and rigidity of each gear box component has been revised to create a smoother and more accurate steering feel with enhanced input response and greater driver feedback.

F SPORT
IS F SPORT models not only benefit from exclusive, exterior and interior design features, but also genuine dynamic enhancements. Both the front and rear suspension systems and the Electric Power Steering (EPS) are exclusively tuned for F SPORT, enhancing handling performance. An Adaptive Variable Suspension (AVS) system is tuned for F SPORT models, while Variable Gear Ratio Steering (VGRS) is also available on IS 350. 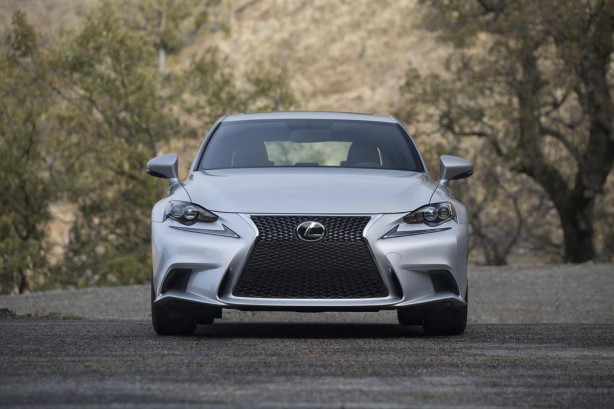 On board, drivers will receive vehicle information from an innovative driver’s meter cluster with a moving center ring, inspired by the LFA. Interior trim detailing includes an F SPORT steering wheel and shift knob, and aluminum pedals and scuff plates that include the Lexus logo.

Exterior Design
The overall dynamic shape of the body emphasizes the wide flare of the wheel arches to give the new IS a broad, powerful stance.

Interior Design
The clean, horizontal theme of the interior is bisected by the strong upward sweep of the center console, creating an ergonomically ideal environment. The newly designed driver’s seat offers greater comfort and better lateral support. Both the seat hip point and the angle of the new, LFA-inspired steering wheel have been lowered and steering reach adjustment has been increased, creating a driver focused seating position.

Refined materials throughout the cabin are complimented by a high quality analog clock with surface-emitting illumination. The climate control system incorporates Lexus-first electrostatic switches, which enable vehicle occupants to adjust temperature settings with the touch of a finger.

All IS models are equipped with the next generation, Lexus Display Audio or Remote Touch-controlled Navigation multimedia systems. Both multimedia systems provide industry-first complimentary real-time traffic and weather information delivered without a subscription through HD™ Radio Technology. The new steering wheel is the first on a Lexus to coordinate multimedia system control with both the meter cluster and center console displays.

The AHB headlamp system maximizes visibility at night by automatically switching to low beams when its camera detects the lights of either an oncoming or preceding vehicle.

An LDA system helps prevent unintended lane changes by alerting the driver when the vehicle deviates from its lane without the operation of the turn signal.

The BSM uses rear mounted radar to detect vehicles in adjacent lanes that are not visible in the outer door mirrors.

The RCTA system employs the BSM radar to alert the driver to approaching vehicles when backing out of a parking space.