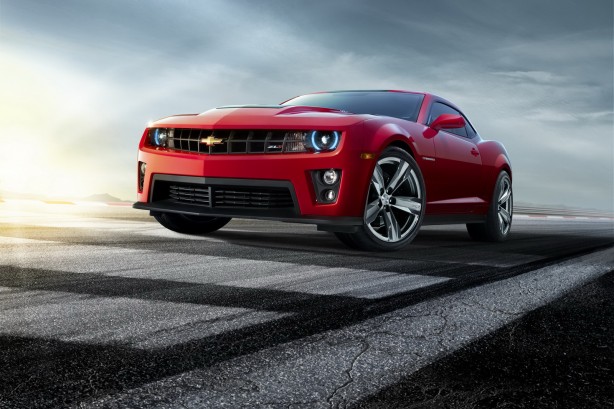 Meet the new red hot 2012 Chevrolet Camaro ZL1, the most technically advanced Camaro in its 45 year history. Named after Chevrolet’s all-aluminium racing engine from the late 1960s, the ZL1 is equipped with an LSA 6.2-litre supercharged V8 that outputs an estimated 410kW of power and a mind boggling 745Nm or torque!

The same basic engine is found under the bonnet of Holden Special Vehicles, which incidentally is a close cousin of the Camaro. That is because underneath those sexy metals, sits a Holden developed Zeta rear-wheel-drive architecture. In fact, Holden played a significant role in engineering the Camaro’s ride and handling. 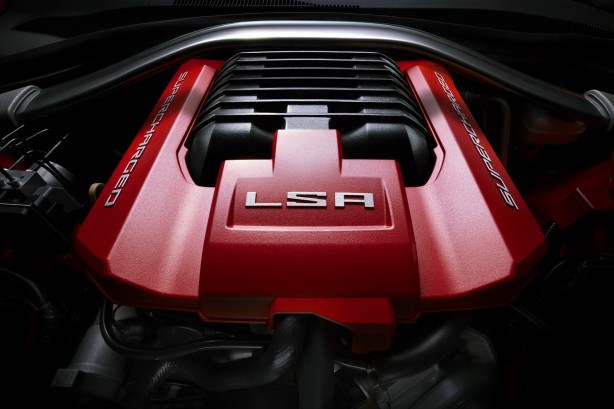 Drive is sent to the rear wheels via a 6-speed manual transmission with a dual-disc clutch system and a shorter-throw shifter. The range topping Camaro also sits on revised suspension with Magnetic Ride Control. Stopping power comes courtesy of high-performance Brembo brake system with six-piston callipers up front and four at the back. The electronic power steering system has also been uprated to provide a sportier drive.

On the exterior, the ZL1 is distinguished by a new front bumper and bonnet with a signature centre bulge made of carbon fibre and rendered in satin black finish. The bulge also incorporates functional air extractors. At the rear, there is a larger boot lid spoiler and quad exhaust tips. 20-inch lightweight alloy wheels shod in Goodyear Supercar F2 tires complete the exterior upgrade. 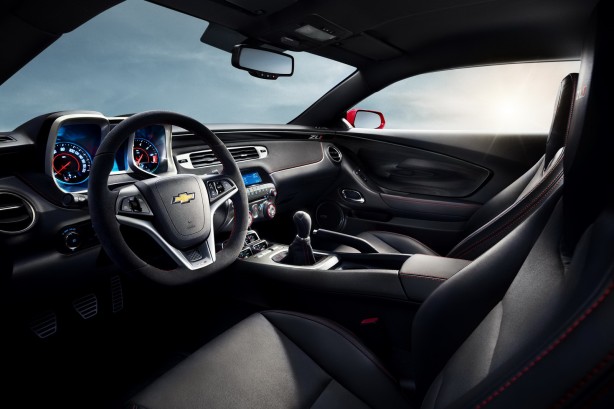 Interior upgrade though, is much less noticeable, with sport seats clad in microfiber suede inserts, new trims throughout and a flat-bottom steering wheel that’s almost identical to the one found on the Holden/Chevrolet Cruze.

When interviewed at the Chicago Motor Show, where the ZL1 Camaro made its public debut, Vice-President of Global Design, Ed Welburn said: “Everything about the ZL1’s design is directly related to its technology and serious performance, especially aerodynamics. Our designers’ goal was to execute that function-oriented design with beautifully sculpted forms, creating an imposing, powerful persona. Function becomes the aesthetic. The intent is a car that delivers on the attitude it projects.”

The new Camaro ZL1 is set for launch at the beginning of next year and GM is keeping a tight lid on the performance numbers until then. For the full specifications, scroll down to the official press release.

Transmission – The high-performance Tremec TR-6060 six-speed manual is matched with the LSA engine. It is the “MG9” version of the transmission, with a higher torque capacity. It is used with a dual-mass flywheel and twin-disc clutch for easy operation and shift smoothness. A new, shorter-throw shifter actuates the gear changes.

Exhaust – ZL1 is equipped with a dual-mode exhaust system, which alters the sound level and character in response to engine rpm. First used on the legendary Corvette, and specifically tuned for Camaro ZL1, the dual-mode exhaust will give the car a signature sound.

Drivetrain – It is revised with a stronger driveshaft and rear axle system, featuring a larger and stronger cast iron differential housing, stronger axles and heavy-duty limited-slip differential. This patent-pending system is designed to ensure that ZL1’s tremendous power is delivered smoothly to the ground.

Suspension – The suspension features completely revised tuning and the inclusion of segment-exclusive Magnetic Ride Control. ZL1’s Magnetic Ride system will include driver selectable modes (Tour and Sport) tailored for the preferred style of driving. It uses advanced magneto-rheological science to produce shock damping with the highest level of precision, enabling body control optimized for excellent performance in everyday driving as well as track situations. This technology appears on only a small roster of some of the world’s finest performance cars. Other chassis elements are redesigned to support the car’s high-performance limits. Rear stabilizer bars have drop links repositioned outboard of the control arms. This makes the bars more effective in controlling body roll in turns, with crisp response to driver commands.

Brakes and Steering – Camaro ZL1 features an advanced track-capable braking system, developed in conjunction with experts from Brembo. The large 14.6-inch (370 mm) two-piece front rotors have six-piston calipers; the 14.4-inch (365 mm) rear rotors have four-piston calipers. ZL1 marks the entry of a new electric power steering system to Camaro. It is being developed to ensure precise control and feedback to the driver, with greater variability of effort for high-performance driving.

Exterior – ZL1’s signature from the front is the redesigned fascia and aluminum hood with a raised, carbon fiber insert. The fascia includes a front splitter and new vertical fog lamps. The fog lamp area includes air intakes designed for brake cooling. The hood features front-mounted air extractors that direct air precisely over the car. Visually, this center section, in satin black carbon fiber, communicates the car’s high-performance intent as a visual contrast to the car’s exterior color. Functionally, the air extractor is a key in connecting airflow closely to the bodywork, creating aerodynamic downforce. The carbon fiber center section reduces the mass of the hood. High-intensity discharge (HID) headlamps and fog lamps are standard. The rear of the car includes a diffuser and spoiler, also functional elements that enhance the car’s aerodynamics.

Production details
All of the Camaro exterior colors will be offered with the ZL1, but black is the only interior color. The unique exterior features are complemented with a black center section on the hood. Inside, the Camaro ZL1 has heated leather seats with microfiber inserts and ZL1 logos embroidered on the front headrests. Microfiber suede is repeated as an accent on the instrument panel, adding a richer look to the interior. The ZL1 will include the same content as the current 2SS package and include the following new or unique features:

Engineers have already driven Camaro ZL1 prototypes extensively at demanding road courses in the U.S. and Germany, with final testing being completed through the balance of 2011.