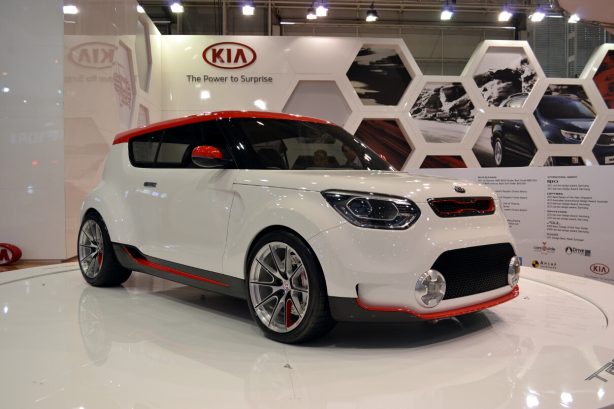 First unveiled at the 2012 Chicago Auto Show earlier this year, the new Kia Track’ster Concept is now down under making its appearance at the 2012 Australian International Motor Show. Designed at Kia’s California design center, the Track’ster is the product of Kia’s second attempt at making a funky urban runabout after the Kia Soul was introduced in 2008.

Unlike the Kia Soul however, which is anything but a sports car, the three-door Track’ster is an all-wheel-drive, 186 kW performance machine. Its turbocharged 2.0-litre four-cylinder engine is mated to a six-speed short throw manual transmission with power sent to all-four-wheels. 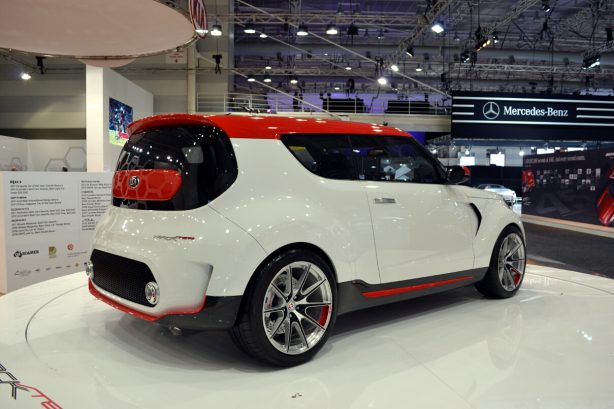 The Track’ster also loses a pair of rear doors and back seats in favor of what Kia describes as a “fully integrated equipment tray and spare-tire well”. This tray is designed to strap up all your essentials for a day at the track – helmets, race suits, gloves, tools, lubricants and all the gear that goes with a serious track car.

The bulging wheel arches mean the Track’ster is almost five inches wider than the Soul. Tucked underneath those aggressive wheel fenders are a set of 19-inch wheels wrapped in Michelin Pilot Sport PS2 measuring a massive 245/40-19 at the front and 285/35-19 at the rear. Stopping power comes from 14-inch Brembos clamped by six-piston calipers for the front axle and 13.6-inch discs with four-piston calipers in the back.

Previous 2012 AIMS: Aston Martin One-77 Comes Out of Hiding
Next 2012 AIMS: All-New Mazda6 Made Local Debut