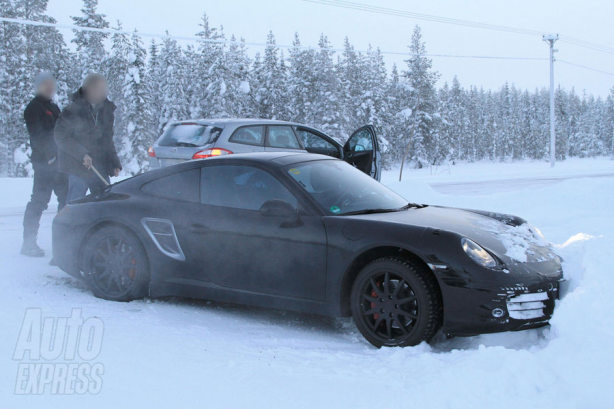 Porsche’s next 911 has big shoes to fill and is only eight months away from making its global debut at the Frankfurt Motor Show. The car is currently undergoing vigorous winter testing in the Scandinavia.

Auto Express’ carparazzi caught a prototype stuck in a snow bank as the test driver misjudged a corner and skidded!

With barely any camouflage on, we are able to reveal more of the car’s detail design. As is Porsche’s tradition, the car won’t be a huge departure from the current 911 design wise. Codenamed 991, the new car has larger, composite front wing pontoons which house all-LED headlights. The side sills are also slightly deeper and the wing mirrors have been moved from the door frame to the door.

More importantly, the rear end of the new car borrows design cues from the 918 Spyder Concept. In order to reign in development and production costs, the new 911 shares its front suspension and steering with the next Boxster. However, it will get unique rear suspension as well as calibrations for the adjustable dampers. The new car will also get the option of dynamic engine mounts and ceramic brakes from improved agility and reduced weight respectively. 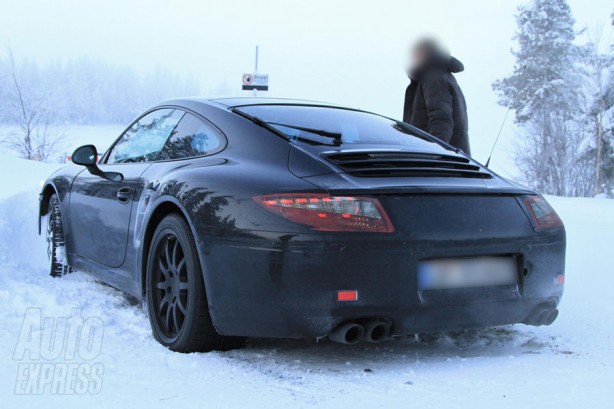 No change though to the engine line-up, with the 3.6-litre flat-six Carrera model’s power and torque tweaked to produce an extra 15kW and 20Nm respectively, giving a total of 272kW and 400Nm. The 3.8-litre unit in the Carrera S gains similar hike in power to 310kW and 440Nm.

Despite producing more power, the engines will be more frugal than those serving the current models. Porsche has tweaked the direction injection system and added brake regeneration and engine stop-start technology to reduce fuel consumption by 12 percent.

The engines will be mated to a standard 6-speed manual gearbox, and the 7-speed PDK will be an option. Porsche expects most buyers to tick the PDK option box though, as around 80 percent of current 911’s feature the PDK dual clutch gearbox.

The 991 is expected to be launched in Europe around October this year, with the more powerful 911 Turbo, GT2 and GT3 models to follow in 2012.