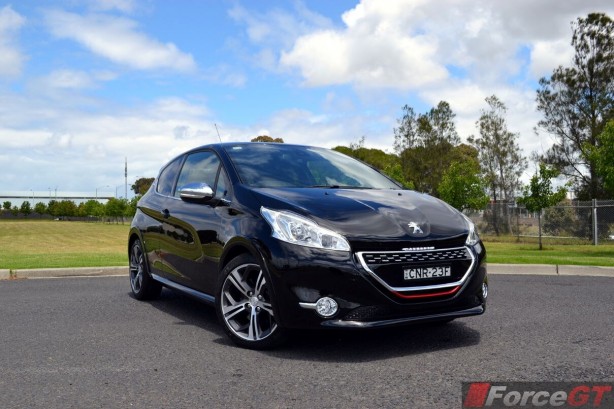 The Peugeot 208 GTi has a lot on its shoulders. Not only does it have to face stiff competition from the Ford Fiesta ST and Renault Clio RS, it is also charged with reenacting the brilliance of the iconic 205 GTI in the 80s, which was tarnished by the 206 and 207 GTis that followed it.

It isn’t an easy task. Cars these days, even the hot versions, have to appeal to the masses to get the corporate stamp of approval. This means Peugeot has to build a 208 GTi that is close to enthusiasts’ hearts, while at the same time remain drivable and comfortable in the real world. So, even before getting behind the wheel of the 208 GTi, I understand it would be a miracle if it possesses the raw freneticism of the 205. But let’s see…

Under the bonnet of the 208 GTi is a 1.6-litre turbocharged four-cylinder petrol engine jointly developed by BMW and PSA Peugeot Citroën, which can also be found in the Mini and Peugeot RCZ. The 147 kW of power and 275 Nm of torque that it develops are distributed to the front wheels through a six-speed manual gearbox, which is the only transmission available. 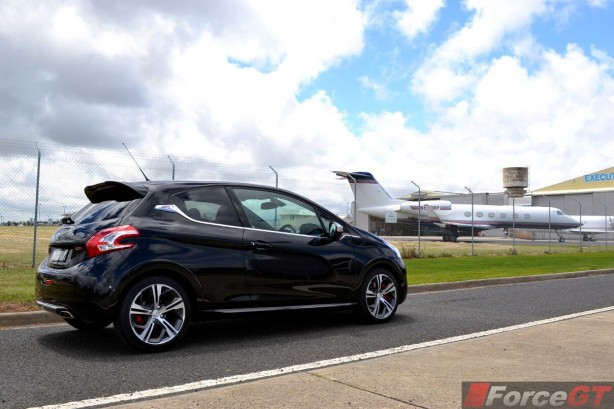 The chassis has been tighten and suspension settings have been tweaked over those of the standard 208 with 20% stiffer spring rates, firmer dampers, thicker anti-roll bar, stiffer front sub frame and rear cross member and reinforced shock absorbers. Sitting 8mm closer to the ground, the 208 GTi features sporty 17-inch alloy wheels with 205/45 tyres, housing 302mm ventilated discs at the front and 249mm at the rear. There is also a discrete set of wheel arches, red painted brake calipers, side skirts and a rear spoiler to further justify its entry to the hot hatch club.

Styling wise, the 208 GTi is a huge success. In black and with those chrome-effect body trim, this little hatch does turn quite a few heads wherever you go. Inside, the dash layout is a bit of a mess like the standard car but there is some really cool black and red gradient effect trim pieces on the door and dash. The leather wrapped steering wheel with red stitching is just the right size and feels good to hold. The body hugging leather sport seats not only pump up the interior further but also provide excellent support during sporty driving. 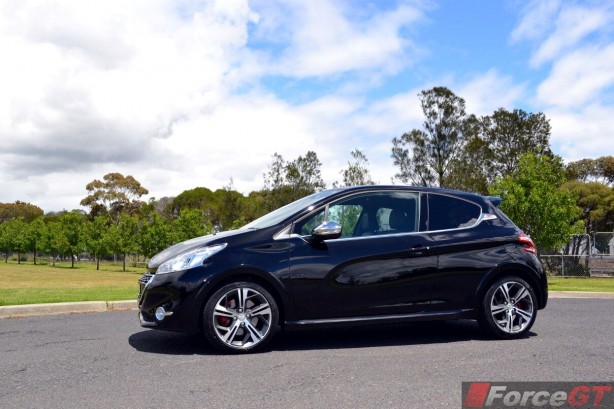 So, what’s it like to drive? In true GTi spirit, the 208 is one of those cars that can back its sharp looks with real performance. The turbo four-pot is potent and dependable. Flatten the throttle in first and a surge of turbocharged power sends the rev needle quickly across the arch. Grab second keeping the right foot planted and the flat torque curve keeps the engine right in the powerband. Delivery remains strong and it’s time for third as the revs dance on the red line. Torque steer is surprisingly minimal and 100 km/h arrives in a swift 6.8 seconds from a standstill (7.0 seconds on test).

While revving out the GTi is fun, almost addictive at times, the accompanying soundtrack doesn’t quite fit the same bill. Sharing the same engine as the RCZ, it’s a pity the 208 didn’t get its cousin’s sportier sounding exhaust.

Serve the 208 with some corners and it becomes evident there is no shortage of effort in tweaking the car’s handling. The 208 feels light, agile and composed. Unleashed, it traces an intended line of travel with excellent grip, only showing signs of giving up at the slowest corners. The strong and progressive brakes further add to the remarkable dynamics. 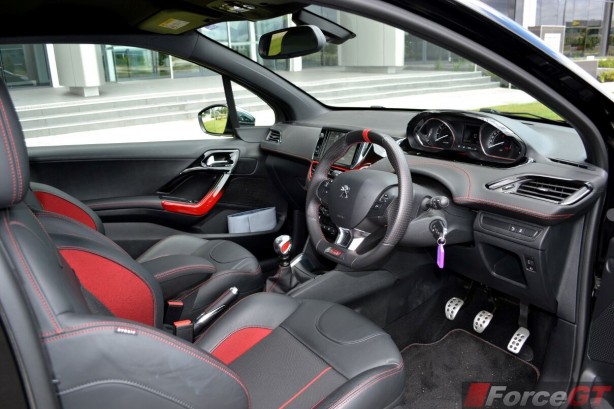 While there’s no doubt the chassis’ emphasis is on handling, the ride quality is far from harsh. It actually rides rather well on our dimpled roads. There are a few issues however. The six-speed manual feels a bit clunky when things get busy and the steering, although obeys your every command, isn’t capable of conveying much information from the road.

Peugeot claims the 208 GTi’s combined fuel economy is 5.9L/100km. On test, it averaged 7.9L/100km with an equal split of urban, freeway and sporty driving. That’s a substantial 2 litres off the figures on paper, despite Peugeot’s effort to make it 165 kg lighter than the 207 GTi it replaces, at 1,133 kg.

Peugeot is finally back in the game with the 208 GTi. While it is not as focused as the 205 GTi, this little hot hatch has grown to offer a different appeal. The 208 sits right in the sweet spot where potent performance and zippy handling meet attractive styling and everyday usability. And we are happy to welcome another worthy challenger to this category.