They don’t come closer matched than these two, they’re both top spec turbocharged petrol hatchbacks separated by a mere $900. The 20 minute around the block test drive the dealers provide isn’t going to be enough to split the hairs and make a solid decision, which is why we have taken both the Civic VTi-LX and the i30 SR Premium for a week long test to figure out which is worthy of your hard earned money. 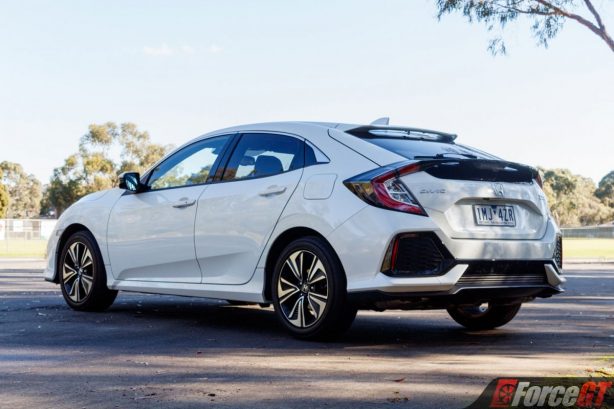 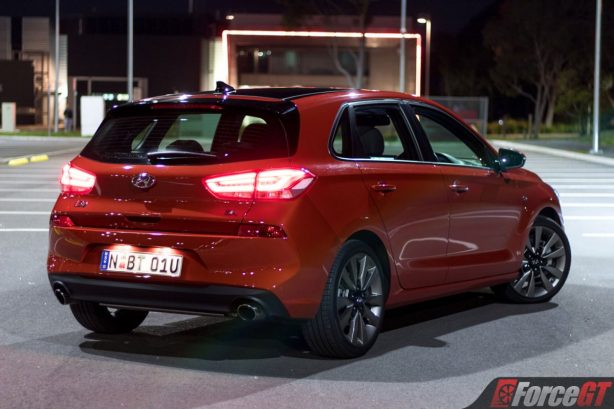 There’s no doubt the current Honda design language falls into the love it or leave it camp. The bloke who oversaw the body styling must have been in a very agreeable mood when signing off on the visuals as he’s included the whole lot. The end result is as modern as Tokyo itself and just as chaotic which places me squarely in the love it category.

Hyundai has opted to play things safe with the i30’s looks by taking a few pages, or rather a few chapters out of the European styling manual. Clean simple lines grace the i30 from front to rear in a conservative approach that broadens its appeal globally. They’ve played it safe in an attempt appease to everyone’s tastes and surprisingly its paid off as the i30 is a handsome looking hatchback, particularly in SR trim.

It’s a draw in looks for both cars. 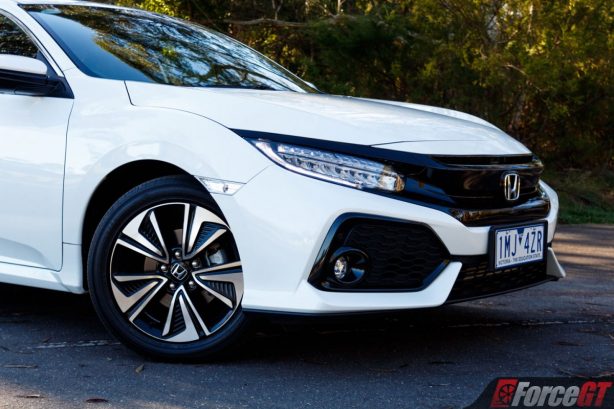 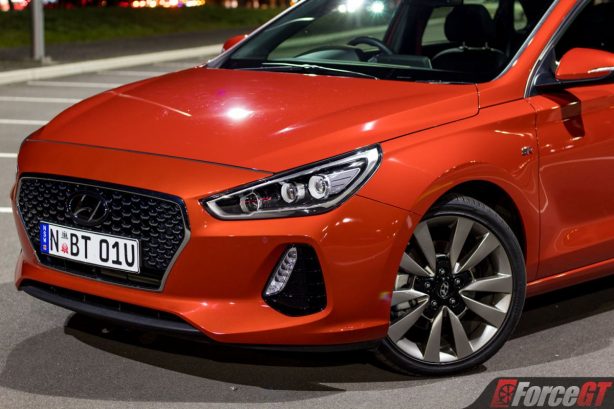 When it comes to interior design there’s real benefits provided from over seventy years in the auto industry and it’s here that Honda flexes their strengths with the Civic. There’s a wider variety of materials used throughout in the Civic which adds visual complexity and sophistication against the more predictable interior found in the i30.

It’s also a more well thought out interior with the centre console featuring cable management for smart phones and the double decker design adding additional storage space, while the adjustable armrest assists with comfort. Hyundai has put in a good effort but could learn a lot from their neighbours across the sea.

An overwhelming win for the Civic here. 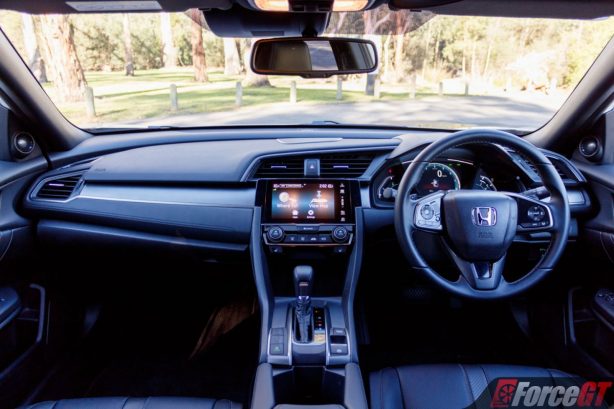 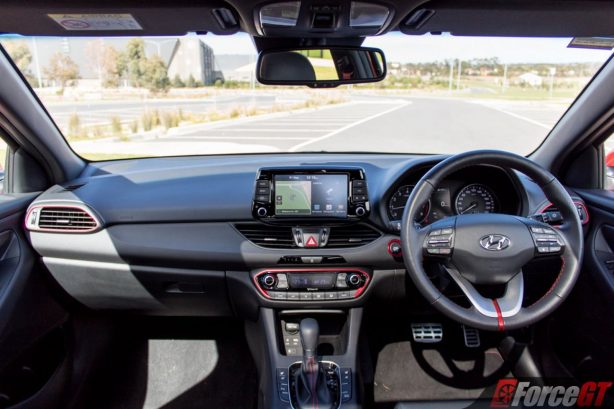 In a dash from the lights, the i30 SR will destroy the Civic each and every time without fail because it has more of everything where it counts under the bonnet. There’s an extra 93cc of engine capacity giving the i30 SR 1.6 litres of turbo power to play with over the Civic’s 1.5 litres. The end result is 150kW at 6,000rpm compared to the Civic’s 127kW at 5,500rpm.

The Civic is the lighter of the two but it’s not enough to tip the scales in its favour in terms of raw acceleration. Honda’s 1.5 litre engine is still a great unit with lots of drivable torque making it a joy to rev out and of the two, it’s the more frugal on fuel using 7.4L/100km rather than the thirstier 8.3L/100km tested in the i30 SR.

Cog swapping falls to a CVT in the Civic while the i30 SR provides a far more advanced and rapid dual clutch gearbox which combined with the paddle shifters works a treat as you work your way up to speed. At the end of the day power talks and the i30 SR scores its first win to tie things up. 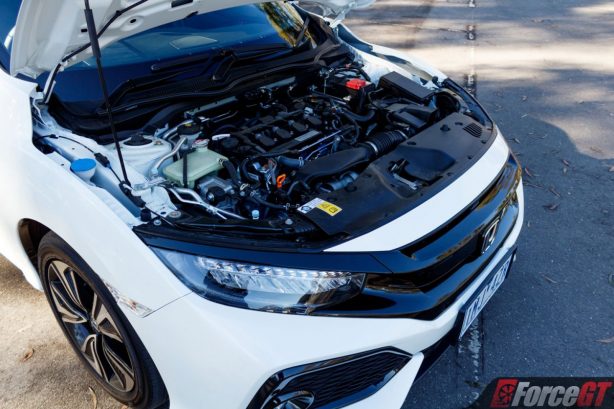 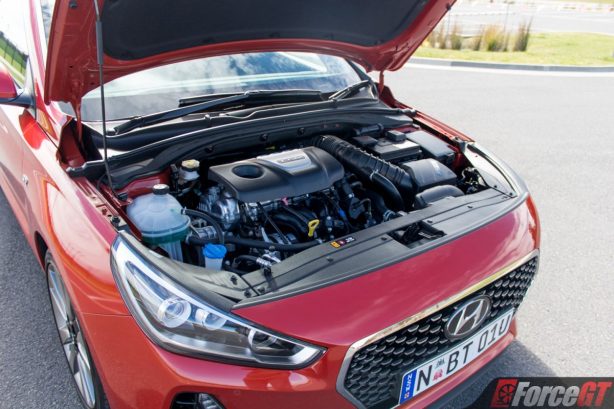 For day to day driving you’d be hard pressed to notice any significant differences between either of the two as they’re both well sorted for Australian roads, while retaining the composure required for sporting drives.

Hyundai has given the i30 SR larger 18-inch rims with wider lower profile tyres which in theory, should give it the edge in the corners but I found myself enjoying the Civic more through the B roads. With the Civic you can confidently push it into the corners and focus on getting the most speed from start to finish whereas the i30 SR fights you on the initial turn-in due to a chassis that isn’t as stiff as it should be – an issue Hyundai rectified with the i30N by adding chassis bracing.

Chalk up another point to the Civic thanks to its lighter weight and more advanced chassis design. 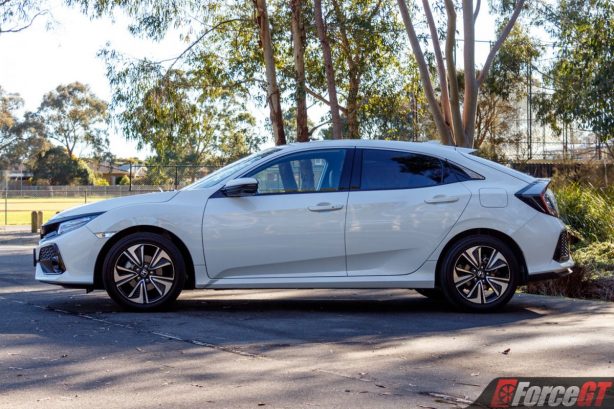 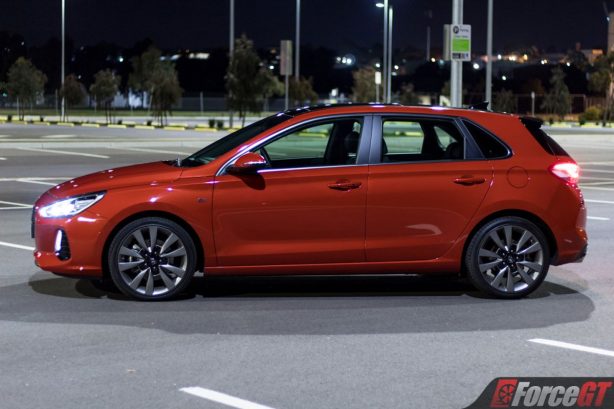 Since both models are top spec in their range they’re going to come fully loaded with more gadgets than James Bond. On closer inspection, there are a handful of advantages given to each. The Civic scores speed limited cruise control to compliment the active cruise found on both cars.

And while both cars have dusk sensing LED headlights, only the Civic’s come with electronic level adjustment. The i30 punches back with the inclusion of rear cross traffic alert, its larger 18″ alloy wheels and blind spot monitoring.

Beyond those minor differences, you’d be hard pressed to find any features lacking across either model. They both score lane keep assist, premium stereo, heated seats, sunroofs and the usual assortment of creature comforts. Once again we have a tie with neither model scoring significantly over the other. 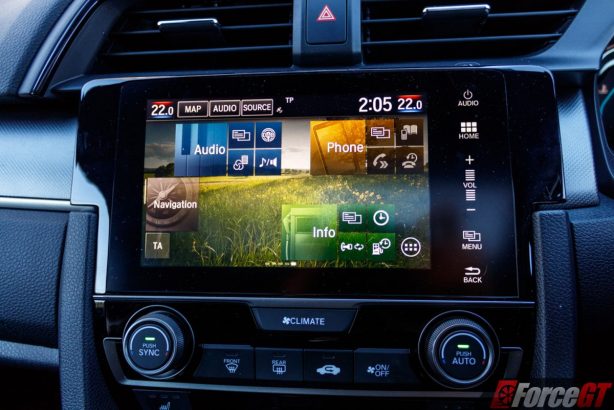 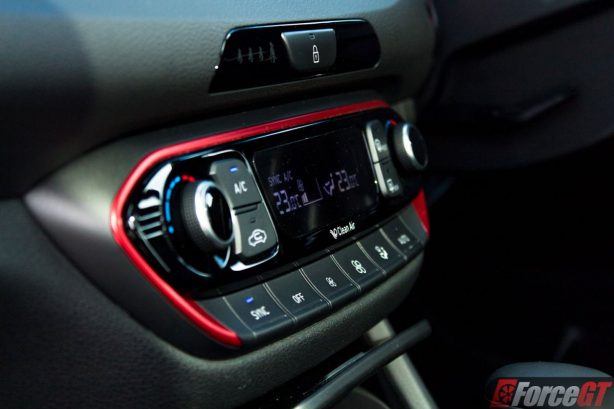 Even though on paper the Civic VTi-LX marginally grabs the lead, your choice will depend on what you value more in a car.

Those that are happy to chew more fuel for extra grunt will be completely satisfied with the i30 SR Premium. The Civic may have the better interior but the i30’s offering isn’t far behind in terms of practicality and appearance.

On the other hand, those that enjoy a more confidence inspiring experience through the corners backed up by a practical and spacious interior will find the Civic equally as tempting.

For me, I’d be jumping into the Civic’s superior interior as the excitement of engine power fades over time, yet well sorted handling will never fail to deliver enjoyment.