If you’re looking to purchase a large 7-seat family SUV, chances are your short list would have already included these two rivals: the Mazda CX-9 and Hyundai Santa Fe. Along with the Toyota Kluger, the CX-9 and Santa Fe represent the top three selling models in the full-size SUV segment. The new generation Santa Fe managed to impress us in a recent road test with an appealing design, a comfortable ride and a strong list of standard equipment, but how does it stack up against the formidable and highly regarded CX-9?

To answer that, we have gathered the range-topping grade of each model and put them through their paces. 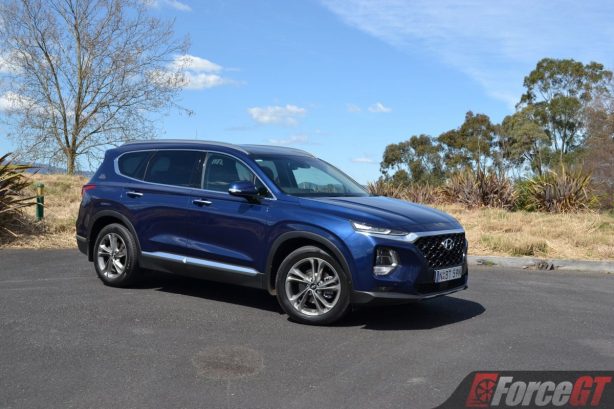 Priced at $60,500, the Santa Fe Highlander comes packed with all the bells and whistles that would satisfy even the most demanding of families. The long list of standard features includes an 8-inch infotainment system with satellite navigation, Apple CarPlay and Android Auto, 7-inch instrumentation cluster, wireless phone charger and head up display.

And of course, essential safety features are all there to keep everyone safe and they include 6 airbags, forward collision avoidance with automatic emergency braking, adaptive cruise control, blind-spot monitoring, rear cross traffic alert, lane keep assist and surround view monitor.

The Santa Fe goes a step further with a unique feature called Safety Exist Assist that is designed to prevent accidents by automatically and temporarily locking the doors when vehicles are approaching from behind. The doors are unlocked when it’s deemed safe so that passengers can exit the car safely. We tested the feature and it worked brilliantly. 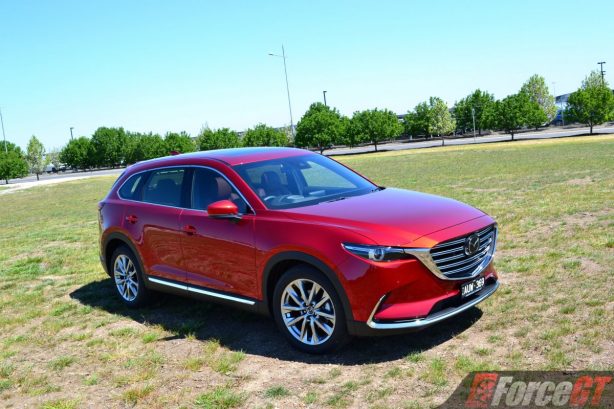 The 2019 Mazda CX-9 pushes upmarket further with the introduction the new range-topping CX-9 Azami LE. Coming in at $64,990, the Mazda asks for quite a fair chunk more than the Hyundai in this price sensitive market segment, though it does come with some really nice details which we will cover in more detail in the next few sections. Having said that, you could save about $1,500 by buying the Azami grade that is basically spec’ed the same as the Azami LE, only missing on some interior wood trim.

Feature wise, the CX-9 is neck and neck with the Santa Fe, matching it in everything from occupant comfort and entertainment to safety and driving aids, with notable differences being the presence of rear climate temperate control in the Mazda that is missing in the Hyundai, and the inclusion of third-row air-con vents in the Korean car which are nowhere to be seen in the Japanese car. The importance of each feature really depends on the needs of families, but since these cars proud themselves in carrying a third row of passengers in comfort, we feel the third-row vents are more important of a feature to have.

Hyundai’s innovative safe exit feature is also not found in the Mazda, so is the panoramic sunroof (regular sunroof only in the CX-9) and one-touch second-row seat slide and tilt.

The CX-9 does pick up some points back in the quality of its equipment however, with the digital instrumentation cluster in it clearer and crisper – the same also applies to the MZD connect infotainment touchscreen and head up display.

The Santa Fe is a good looking car from every angle, with elegant lines and classy touches accentuating its nearly perfect proportions, though some find may the oddball front lighting layout – daytime running lights at the top cluster, main and high beam at the bottom – a little hard to digest.

While it’s apparent the Santa Fe is an offering from a mainstream brand, the CX-9 on the other hand looks more like a product from a premium marque. With a sculpted body serving as a backdrop for smooth lines and fine details such as that imposing yet beautifully crafted grille, there just isn’t a single bad angle about the car. In the upper spec variants such our Azami LE, the CX-9 can easily flirt with luxury cars costing twice as much. 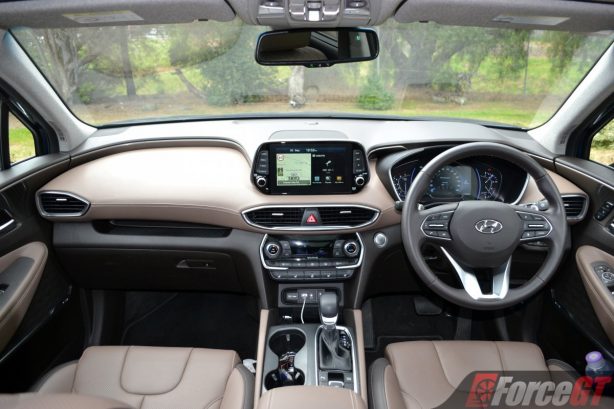 Unlike the exterior, things are definitely a lot more conventional on the inside of the Santa Fe, with the sweeping layered dashboard giving a sense of space and the grooves on the speaker cover and upper seat cushion adding a touch of style.

Some of our testers – myself included – are not huge fan of the optional ($295) dark beige two-tone leather interior, feeling it looks too chocolatey and earthy, though there’s no denying the trimming is incredibly detailed and thorough. And the rest of the cabin echoes this high quality build and finish, with all contact points trimmed in soft touch surfaces and the interior as a whole largely devoid of harsher, scratchier plastics.

If the Mazda’s exterior has managed to impress us, then the interior has simply blown us away. The entire look and feel of the cabin speak of top-class luxury, with soft surfaces adorning the upper dashboard and door trim, lifted by premium glossy trim in the lower centre console and lavish leather upholstery. There’s also a sweeping single piece of aluminum across the dashboard, emphasizing width.

The cabin is impeccably well put together, with faultless fit and finish and a tactile feel to all switches, buttons and knobs. In fact, it would come as a surprise to many that this cabin belongs to a car costing just sixty odd grand. It’s in a different class to that of the Hyundai. 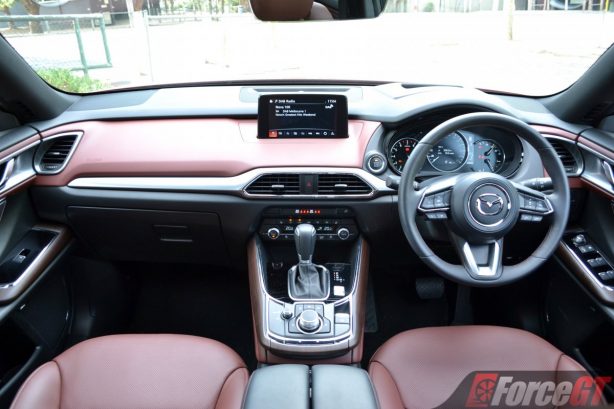 Both cars offer comfortable seating for occupants in the first and second row, but only the CX-9 has an adult-friendly third row, with acceptable leg and head room to keep occupants back there happy for longer than just trips to the local shopping mall. The Mazda’s second row seats also slide forward more, making third row ingress and egress easier than in the Hyundai.

Space in the Santa Fe’s last row is considerable tighter in comparison, with adults likely to brush the tip of their heads against the roof lining. It’s best reserved for kids out the back here in the Hyundai.

The Santa Fe does, however, compensate the less practical third row with larger and more usable storage compartments around the cabin, with a more voluminous center storage (the CX-9’s is painfully tiny) and extra storage above the glove box and under the rear air vents.

The pendulum is swung once again in Mazda’s direction when it comes to cargo space. With the third row up, the CX-9 has 230 litres of boot space, expanding to 810 litres with them tumbled. Folding down the second row of seats further enlarges the space to 1,641 litres.

The Santa Fe’s boot space is smaller in all configurations, with the figures coming in respectively at 130, 547 and 1625 litres.

The Santa Fe Highlander tested here sports a 2.2-litre four-cylinder turbo diesel under the bonnet producing 147kW and 440Nm, with drive channeled to all four wheels through an eight-speed automatic transmission. It’s not the most refined diesel powerplant out there, with a distinct clatter to it on idle and when accelerating at lower speeds. It does settle down considerably once on the move and in the higher gears. On the freeway, there’s nearly no signs of a diesel tickling up front, and not only that, the whole cabin is quiet too with minimal road and wind noise intrusion.

With peak torque holding from a low 1,750 to 2,750rpm, the engine gets you moving and up to speed surprisingly briskly, with torrents of pull in the mid range for swift overtaking. It’s got everything needed to handle the near 2 tons of weight and more. 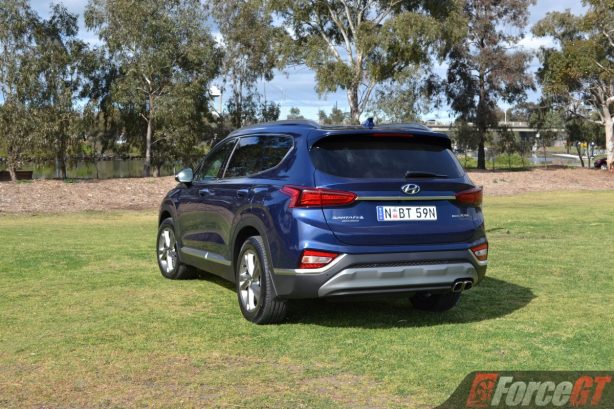 The CX-9’s 2.5-litre direct-injection turbo petrol engine outputs 170kW and 420Nm, eclipsing the Santa Fe in power but falling shy of it in peak torque, which also arrives 250rpm higher at 2,000rpm. Being petrol fueled, the CX-9’s turbo four is inherently a quieter and more refined engine than the Santa Fe’s oiler. But that itself is an understatement because this mill is one of the best turbo engines we have come across, delivering responsive power and diesel-like grunt without a slightest hint of turbo lag.

Despite the torque deficit compare to the Hyundai, the Mazda actually feels like the stronger of the pair, as the mid range pull shows no signs of fading until around 5,000rpm where peak power is produced. It’s got everything on the Hyundai, only better. 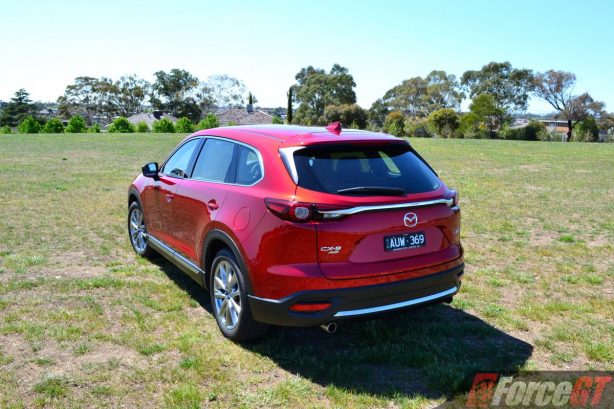 With 2 fewer ratios than the Hyundai’s 8-speed auto, do not think the Mazda’s 6-speeder is an inferior ‘box as it’s a perfect match to the torquey turbo four, delivering smooth shifts with near twin-clutch level of speed and efficiency. Left to its own devices, its evenly spaced ratios are shuffled intelligently, no matter what the terrain is.

The Santa Fe’s transmission is just as faultless, albeit not as quick. It’s geared well enough to extract the maximum from the diesel’s low-down torque and superbly smooth in its operation.

When it comes to fuel economy, the CX-9’s tested real world average of 10.3L/100km is up against the Santa Fe’s 8.8L/100km. And it’s not a surprising outcome as a diesel is fundamentally more efficient on open roads. On paper, the CX-9 and Santa Fe are respectively rated at 8.8L/100km and 7.5L/100km on the combined average.

In terms of ride comfort, both crossovers perform remarkably well, soaking up bumps and ruts with aplomb to deliver the kind of plush ride expected of a family SUV. As mentioned earlier, these cars are also impressively quiet on the freeway, with wind and road noise very well insulated.

There’s no denying the sheer size of both vehicles on the road as both weigh in near two tonnes. However, it’s not as noticeable as you’d expect. Both crossovers feel connected and composed in the bends, with body roll constantly kept in check. That said, the Mazda does offer a better drive with more feel and cohesiveness through the steering, along with tighter body control.

Without doubt, the Hyundai Santa Fe and Mazda CX-9 are currently two of the most accomplished 7-seat SUVs on the market. There is really not much that separates these two. Perhaps it’s a question of whether you prefer a petrol or diesel powerplant, or if having spacious rear seats is important.

The more fuel efficient Santa Fe will save you some dollars for each country drive, while the CX-9 will accommodate 7 adults in much better comfort.

But to us, one thing is clear. The Santa Fe is a very impressive mainstream SUV, while the CX-9 is a cut price luxury crossover.