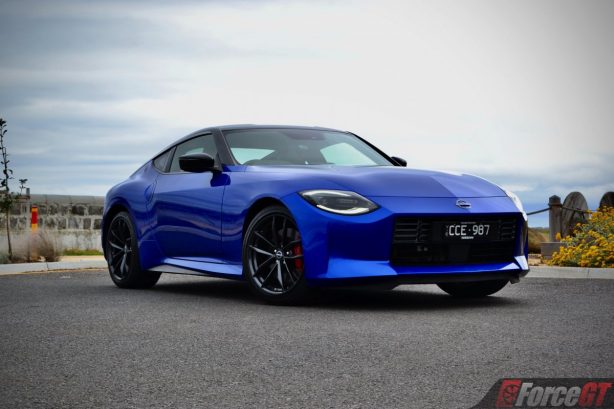 We are at a turning point of the automotive industry. The push for electrification means car makers have to rethink where they direct their money and resources. Electric and more environmentally friendly cars are left, right and centre of almost every major car maker’s strategic planning today. Something has to give for those plans to succeed and what’s more appropriate than culling the fun models which only cater to a niche market?

For Nissan, we all thought the 370Z was the last straw in the Z badge’s illustrious history that dates back to the 60s. Since its launch in 2009, the 370Z has had all sorts of updates and special edition models but no proper replacement, until now.

Yep, the Z nameplate got its first all-new model in 13 years! And the name is no longer prefixed with digits that represent engine displacement. The new car is now simply called the Nissan Z. Whatever Nissan fancies calling it, we can’t be more grateful that a new one – complete with a sizzling engine and manual gearbox – is brought out in this new era of responsible mobility. Clean cars are necessary but fun cars need to survive. 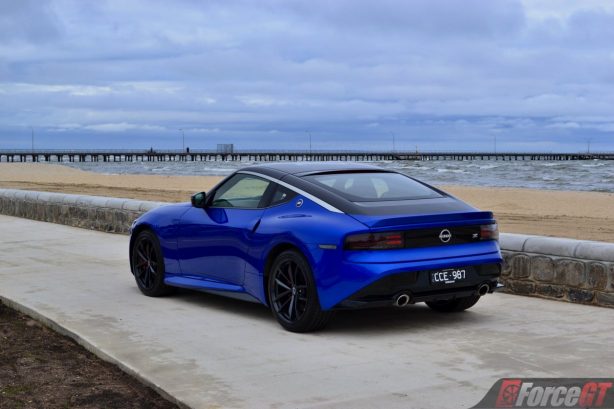 Australia’s appetite for high performance cars remains sky high, as evident by the initial limited edition Z Proto selling out in record time even before the arrival of the first shipment of Z cars in the country. The Z Proto, with its exclusive Ikazuchi Yellow paint work and matching yellow brake callipers, costs $80,700 plus on-road costs. The regular Z comes in a single specification level equipped with either a 6-speed manual or a 9-speed automatic transmission. Both variants are identically priced at $73,300 plus ORCs.

The pricing strategy places the Z right in the middle of its two closest arch rivals, undercutting the $86,494 Toyota GR Supra GT but costing more than the $65,290 Ford Mustang GT Manual. All prices exclude ORCs. 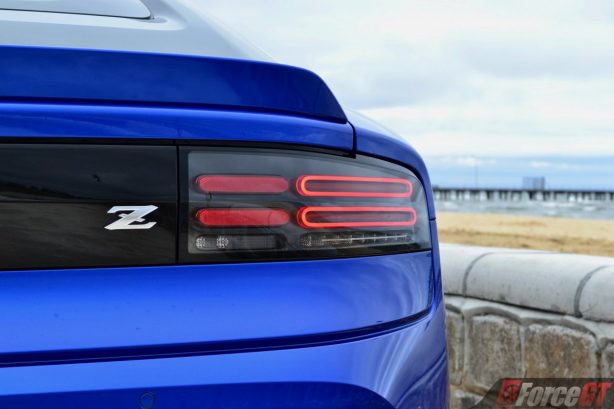 With the intro out of the way, let’s dive into it. The design is perhaps the biggest talking point of the new Z. It fuses modern styling with classic elements from the original Z model, the 240Z, also known as the Fairlady Z in its home country of Japan, as well as the 300ZX.

The bonnet design, the canted, teardrop-shaped LED headlights and the rectangular grille all hark back to the 240Z. Hues of the original classic continue on the sides where, in contrast to the 350Z and 370Z, the rear haunches adopt a squarer design and the roofline flows to a lower rear deck. The Z badge on the C pillar also pays homage to the original.

The taillights take inspiration from the 300ZX, where a black section runs the width of the rear and wraps around the outer edges, punctuated by sharp glowing LED lighting.

We have seen this kind of retro styling exercises end up in quite a bad way elsewhere (Chrysler PT Cruiser is one) but on this occasion it works. Yes, the rectangular grille is probably the hardest to digest, but overall the new Z looks sporty without being over the top, modern yet respectful of its past, mature while intriguing. 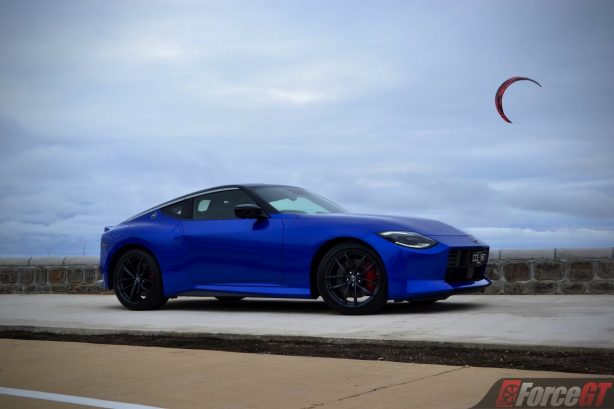 The two-seater cabin has been revamped, with the biggest highlight being the new 12.3-inch fully digital instrument cluster providing Z specific driving gauges. An 8.0-inch infotainment touchscreen at the centre of the dash is also new and supports DAB+ as well as Apple CarPlay and Android Auto integration, with sound played through a punchy 8-speaker Bose premium sound system. There’s no built-in satellite navigation though, which seems questionable at this price point.

As with every generation of Z, bar the 300ZX, a trio of analogue gauges sit atop the dash and angled toward the driver for that racy feel. They certainly look the part, if not a little mismatch with the digital instrumentation. 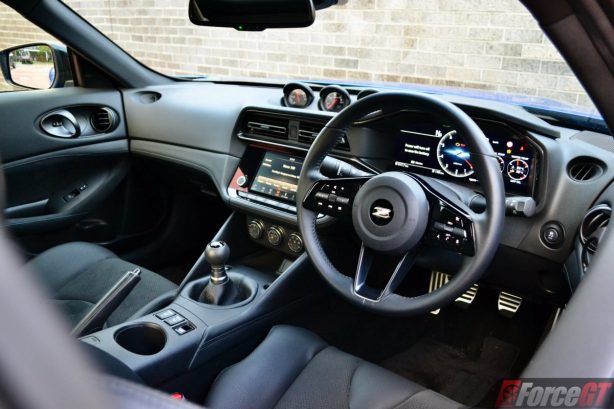 Past Z owners will be able to instantly distinguish some of the interior parts that came straight from the old 370Z and even the 350Z, namely the door release latch, door-mounted air vent, power window buttons and handbrake lever. It’s certainly a result of cost-saving, which is just fine as those old parts are still good.

That all said, in a sports car everything in the cabin is secondary to the driving position and the feel behind the wheel. And we’re glad to say that it is a good one. You sit low and tight, the sports bucket seats with electric adjustment is supportive yet comfortable, the leather-trimmed steering wheel falls nicely to hand and the short-throw manual gear stick feels slick to operate. 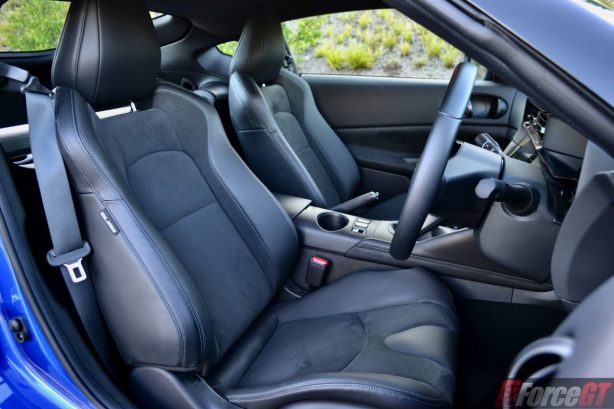 The only complaint we have is that the aluminium pedals, while nicely weighted and look brilliant, are spaced a little too far apart for effective heel and toe. That’s only if you want to DIY, as the Z manual comes standard with an auto rev-match function that automatically blips the throttle on downshift for perfectly synchronised gear changes.

Not that owners would care but the Z is not a practical car, though there is space behind the seats for the odds and sods in case the 241-litre boot isn’t enough. For perspective, the new boot is actually smaller than the old 275-litre one.

Safety is taken care of with five airbags and a suite of active safety features including Automatic Emergency Braking with pedestrian detection, forward collision warning, lane departure warning, rear cross-traffic alert, blind spot monitoring and high beam assist. With limited visibility out the rear, front and rear parking sensors and a rear camera are included to help with parking. 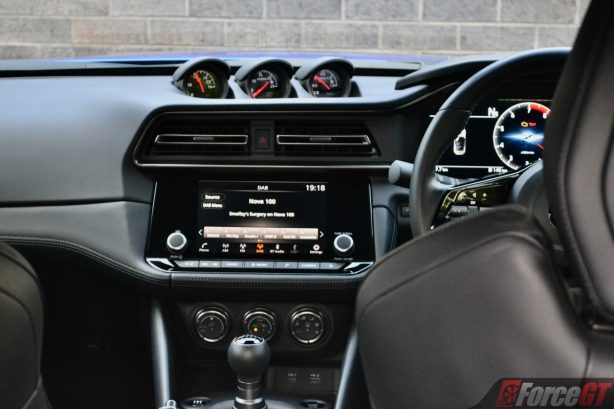 Moving on to the bits that matter, the new Z finally sees the return of turbos (yay!). Driving the rear wheels is now a twin-turbo 3.0-litre V6 petrol developing a potent 298kW / 475Nm. This engine has been on Australian roads before, nestled within the Infiniti Q50 and Q60 Red Sport that were sold here up until six years ago, when Nissan’s luxury arm pulled the plug and left Australia due to slow sales.

Yup, the engine is new to the Z but itself is not exactly new. Not that it matters because it’s 53kW and 112Nm stronger than the naturally aspirated 3.7-litre V6 in the 370Z. However, power output is one thing, experience is another. 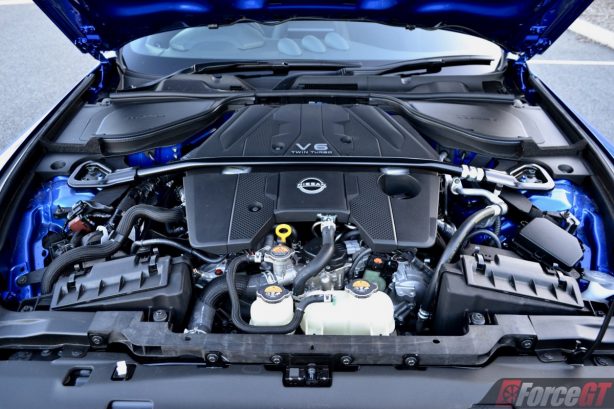 Immediately noticeable upon accelerating away in the Z is the progressive build up of power right across the rev range. Peak power arrives at a high 6400rpm but torque is at your full disposal from just 1600rpm and hangs around until 5600rpm. Finesse the clutch and throttle at launch and the Z will take off with just a chirp of a wheel spin in the back before hurling toward the horizon at savage speed. The V6 is eager to rev and that prodigious torque pins you to the back of your seat with every upshift, with no signs of fading until you’re well over the legal speed limit. This is the fastest Z to date.

Nissan has no interest in stating the official 0-100km/h sprint time, but our best attempt out of three saw the Z stopping the watch at 4.6 seconds. And that’s without using launch control. A time of low 4s is completely plausible if launch control was used in ideal condition. 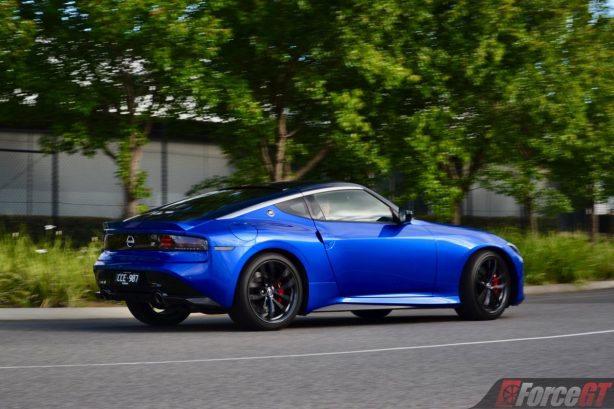 It’s worth noting that despite rolling on fat 275/35R19 Bridgestone Potenza S007 rear tyres, the Z is quite tail-happy if you’re not careful with your throttle. Drifters will love how easy it is to go sideways in the Z, but for the weekend blast around the hills it’s best to keep the electronic guards on and go easy with your throttle application in the lower gears.

Drive the Z with respect and you’ll be rewarded a beautifully locked down front end, flat cornering stance and quick direction changes. Dynamically, the Z is right up there with the best in the game – Supra, Cayman and M2 to name a few.

Where the old 370Z felt a bit gruff in places like the gearbox and steering, the new car is a lot more precise and finely tuned in those areas. There’s ample stopping power, too, provided by those 355mm front and 350mm rear vented brake discs clamped by 4-piston front brakes and 2-piston rear brakes. 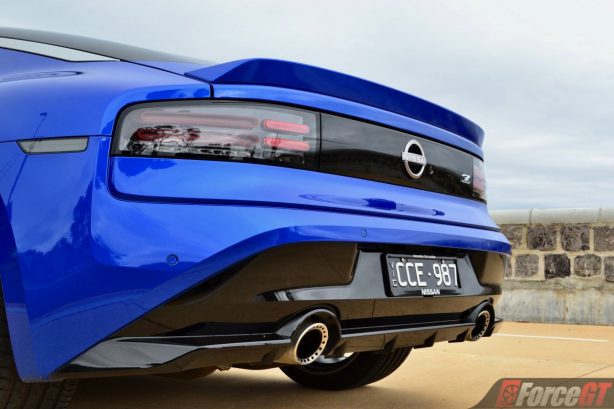 Perhaps, the driving experience is most let down by the lack of noise and drama. While the engine sounds quite enthusiastic when prodded, there’s just nothing at all from the exhaust. It’s almost as quiet as a Nissan Pulsar. The old 370Z certainly has more attitude in its soundtrack. But there’s nothing the aftermarket world can’t fix, especially for a Z.

Around town the Z is truly one of the most comfortable sports cars we have driven. The fixed damper set-up is a fine example of a well engineered and tuned suspension, one that delivers the goods in both handling and ride comfort. The Z is a very liveable daily driver.

The Z is covered by a five year, unlimited kilometre warranty, complimented by free roadside assistance for the duration. Its service interval is 12 months or 10,000km, with capped price servicing available for the first six years.

The fact that a new Z exists today is enough to make us very happy. But the new Z is much more than just another marketing exercise to inject interest into the Nissan brand, for its got genuine performance wrapped in a stylish package that is backed by pedigree and heritage. We just wish it had a bit more theatrics. Perhaps Nissan is saving that for the Nismo version? Watch this space.