As the push to electrification intensifies, Hyundai and Kia are taking the front foot in beating their mainstream rivals to the fore with the Hyundai Ioniq 5 and Kia EV6.

Developed as electrical vehicles (EV) from the outset, the duo are the first to get serious about making EVs the ‘new normal’.

Sporting the same underpinnings but with completely different outlook, we lined them up for our first ever EV comparison to help you decide which showroom you should be making a beeline for – that’s if you are lucky enough to snare yourself one, as both models are in limited supply.

Kia and Hyundai have supplied their respective range-topper for this test. That means over 200kW of power from the electric motors and all-wheel drive as standard.

Sitting on the Hyundai/Kia dedicated E-GMP electric architecture, the rear-wheel-drive Ioniq 5 is propelled by a 160kW/350Nm electric motor on the rear axle and offers 400- and 800-volt charging capacity, the latter capable of a 17-minute 10-80 per cent charge when connected to a 350kW DC fast charger.

The Ioniq 5 AWD, as tested here, gains an extra electric motor and churns out 225kW/605Nm and all-wheel drive traction. The dual permanent magnet synchronous motors – 70kW/255Nm up front and 155kW/350Nm at the rear – embarrasses the EV’s 2,100kg tare mass for an impressive 5.2 seconds acceleration, and it feels as much from behind the wheel, too.

The motors draw from a 72.6kWh liquid-cooled lithium-ion battery with a claimed energy consumption of 19kWh/100km to deliver a 430km range (WLTP). Our tested average hoovers around the 18.5kWh/100km, which included some EV mileage killing freeway driving.

Meanwhile, the three-tier EV6 begins at a more affordable $67,990 but extends further, ending up at $87,590 – all before on-road costs. Our range-topping dual-motor AWD EV6 GT-Line shares an identical powertrain to the Ioniq 5 but with an extra 14kW of power.

However, thanks to a bigger 77.4kWh lithium-ion battery, the EV6 gets a claimed 484km range (WLTP) along with a slightly lower energy consumption of 18.0kWh/100km. We averaged 19.0kWh/100km with a few standing start launches thrown in.

It’s worth noting however the Ioniq 5 is sold through a fixed-price, agency-style strategy, much like Tesla. And due to the outrageously limited supply, you’ll be hard pressed in getting any discounts for the EV6 either. 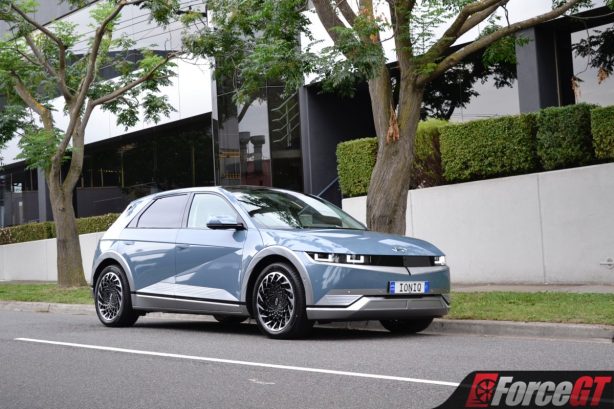 The Ioniq 5 might look deceivingly like a hatchback at first but get closer and this retro-style, low-slung five-door is more akin to a mid-size SUV than a Volkswagen Golf!

Indeed, at 4.6 metres long and nearly 1.6 metres tall, the Ioniq 5 is in fact bigger than the Hyundai Tucson.

Its novel pixelated driving lights and taillights are also unlike what we have seen before and cements Hyundai as a forward thinking and progressive company. 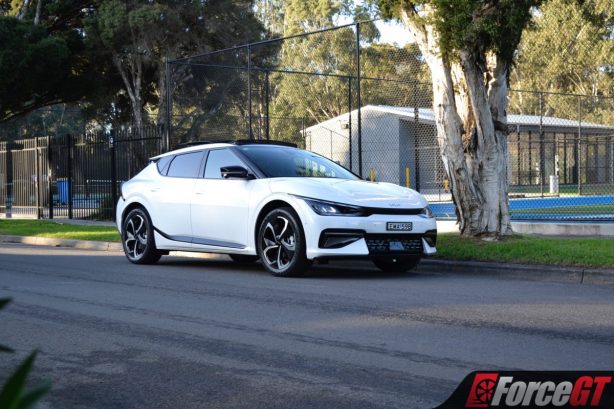 The Kia EV6 on the other hand takes on the sportier vibe with a coupe-like profile and plenty of curves. It is just as large as its counterpart, measuring 4,695mm in length (60mm longer than the Ioniq 5), and sharing the same width and height at 1,890mm and 1,550mm, respectively.

Both score retractable door handles and giant clamshell bonnets which open into the electric powertrain and a small storage area.

And while both vehicles are attractive in their own way, the Kia does look the more expensive of the two.

Step inside and you can’t help but be in awe of the sheer amount of space in the Ioniq 5. It’s more lounge room than car cabin with almost armchair like front seats. To top it off, the cabin is highly configurable too. The centre console slides back and forth while both row of seats slide electrically.

The front seats come complete with extendable leg rests so that you can sit back and relax while the car is being charged. Did I mention they are very comfortable and supportive too?

The cabin feels light and airy thanks to the light-coloured materials used and the large panoramic sunroof which supplies an abundance of light even on a cloudy day. There’s an electric sun-blind that helps filter out the heat relatively effectively on hot days.

Fit and finish and materials are top notch as expected from Hyundai these days. The plastics are soft where it counts and even the hard-wearing plastics lower down feel nice enough to the touch.

There are plenty of storage dotted around the cabin including a curious slide-out tray for a glovebox, large centre console, twin cupholders and water bottle holders in the doors.

Around the back, the Ioniq 5’s boot yields 527L, while the trunk up front adds a further 57L.

In comparison, the EV6 GT-Line only manages 480L for its boot and 20L up front.

However, it claws back points for having a more premium feel inside, with its twin-screen set up that curves gently towards the driver, as seen in other new Kia models. Even the starter button is angled towards the driver. Like the Ioniq 5, the digital instrument display can be configured to your liking. Cabin materials and fit and finish are similarly excellent.

Second-row accommodation is excellent with plenty of room in all directions. It’s nice and airy in here, too with no issues with visibility

There are plenty of storage with a large central bin and bottle holders in the door cards.

Both the Ioniq 5 AWD and EV6 GT-Line are comprehensively equipped.

On the safety front, they come with:

For the full specification, head here for the EV6 and here for Ioniq 5. 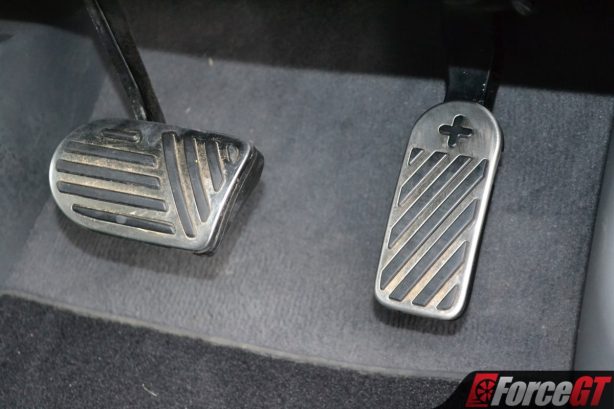 Being platform mates, it comes as no surprise that some elements of the Ioniq 5 and EV6’s driving experience are rather similar.

Both models adjust the levels of regenerative braking identically via steering wheel paddles and include a one pedal driving mode called i-Pedal. There’s also a Sport mode selected via a steering wheel button that engage both motors for maximum thrust and traction.

Steering gearing is also identical at 2.7 turns lock-to-lock, and both default to the rear electric motor in regular driving to maximise efficiency; only troubling the front motor when extra traction is required.

However, there are subtle differences, too, chiefly in the way they handle. While both models have undergone local suspension tuning, Kia’s efforts appear more fruitful than Hyundai’s, perhaps because it takes on a slightly sportier stance.

The EV6 is said to be the first vehicle from a mainstream manufacturer to be fitted with ZF Sachs’ sophisticated variable-force dampers. And while it brings a firmer low-speed ride compared to the Ioniq 5, it’s never crashy or uncomfortable and generally feels more settled and controlled at higher speeds.

On bumpier country roads, the Ioniq 5 can be slightly more jittery and less successful in absorbing larger bumps. While both models bring an abundance of grip and tackle corners confidently, the EV6 does it with greater composure in fast directional changes and over mid-corner bumps.

Drivers will also find the EV6 marginally more involving due to the fact you actually sit in the driver’s seat as opposed to on it, as with the Ioniq 5.

Here, the EV6 again trumps the Ioniq 5 with a superior 7-year warranty against 5-years. However, it’s worth noting the EV6 comes with a 7-year battery warranty, while the Ioniq 5 has a 8-year/160,000 cover.

Its servicing cost is also lower, averaging $226 per year on a seven-year prepaid plan compared to Hyundai’s $337.

The EV6 and Ioniq 5 are both exceedingly impressive vehicles, bringing head-turning styling and industry-leading fast-charging capability.

However, the Kia edges ahead thanks to its longer range, more sophisticated suspension, additional technology, and a more involving driving experience.