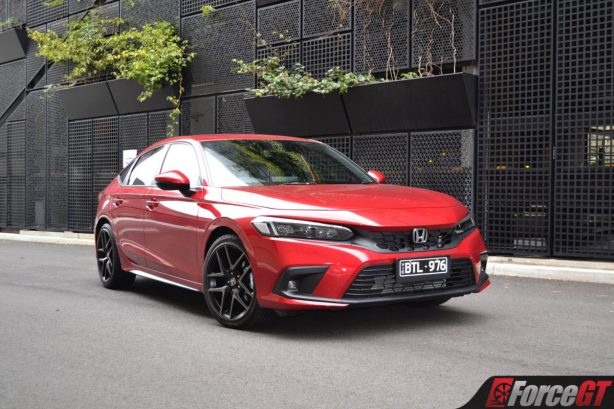 The 2023 Honda Civic VTi LX Automatic is a fresh new take on a classic model, offering an elegant new exterior design and a clean retro-inspired interior.

Now in its 11th-generation, the new Honda Civic has so much going for it, taking us back to a time when Honda produced some truly likeable cars like the Integra and Accord Euro, except it comes with such an outrageously uncompetitive cost!

That’s partly because Australia only gets the top-of-the-line VTi LX variant priced from $47,200 plus on-road costs, making it $7,600 more than the superseded Civic RS model – a tough pill for some buyers to swallow.

Another coffin in the nail for the once adored model is Honda’s switch to a fixed-price sales strategy, meaning you can say goodbye to your haggling skills. Everyone pays the same price here.

Nevertheless, let’s look past the pricing and focus on the new Civic’s good bits, of which there are many. 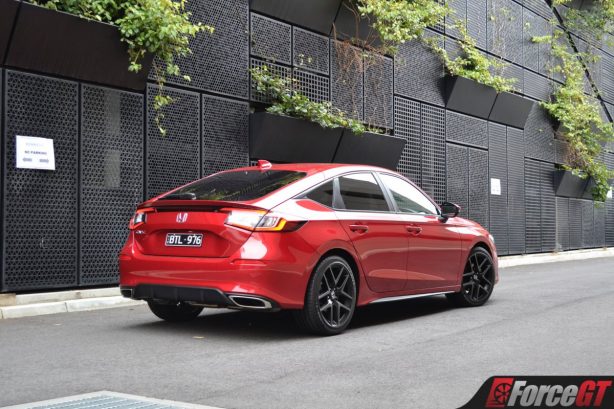 One of the standout features of the 2022 Honda Civic is its sleek new exterior design. Gone is the overdone styling with oversized faux air intakes, replaced by a more aerodynamic shape with a lower and wider stance for an elegant yet athletic look.

The front end is characterised by a wide grille and sleek headlights, while the rear end features a set of slender taillights and integrated dual exhaust pipes. It looks sharp and turn heads wherever it goes.

Inside, the transformation is even more striking, with a clean, retro-inspired design that harks back to the original Civic models of the 1970s. I know because I had one as my first car. The dashboard is simple, uncluttered and comes with a cool honeycomb design that seamlessly and cleverly hides the aircon vents. 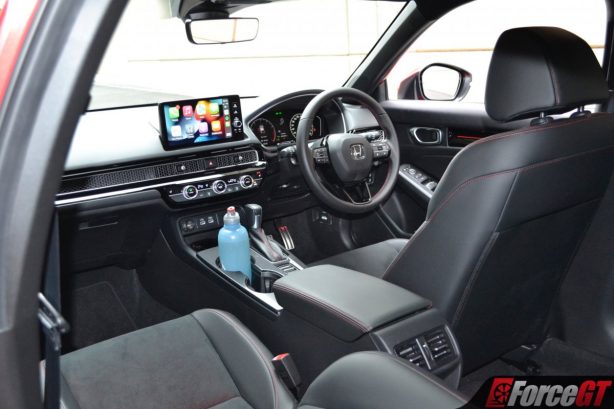 As expected from a Honda, the choice of materials feels premium with the level of elegance boosted by white back lighting, tactile chrome dial surrounds and red mood lighting.

The central 9.0-inch touchscreen sits on top of the dash at eye-level and comes with a row of large, easy to read shortcut buttons and volume knob – a welcome achievement from Honda for resisting the buttonless interiors of some rivals.

The seats are comfortable and supportive, with plenty of room for both front and rear passengers. The Civic VTi LX also offers plenty of storage space, with cup holders large enough for bottles, a dedicated wireless phone charging pad up front and handy cubbies and compartments throughout the cabin.

The driver’s seat has eight-way power adjustment, plenty of leg, shoulder, and hip room, while the front passenger also scores a four-way power adjustable seat. Rear seat passengers haven’t been neglected, either, with rear air vents and a pleasing amount of legroom.

However, those at the back will have to supply their own power banks if they are prolific with their phones as there are no charging options at the back.

One thing that strikes us is how unimpeded the Civic’s cabin is. The view out is uncluttered with hidden wipers, a low bonnet and door mounted mirrors, giving it a sense of openness. 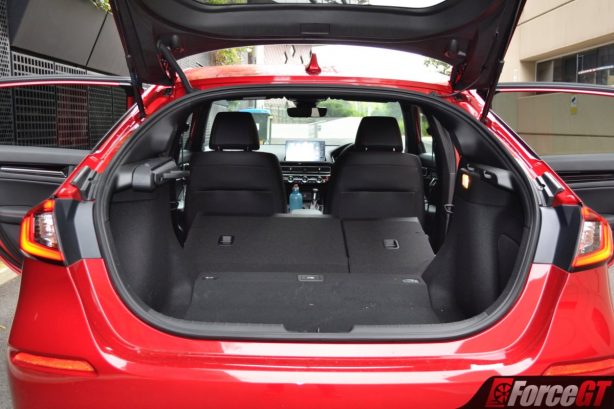 Despite shrinking from more than 500L, the Civic VTI-LX’s boot is still a generous 450L, making it bigger than the Corolla hatch’s 333L, the Mazda3 hatch’s 295L, the Hyundai i30 hatch’s 395L and the Kia Cerato hatch’s 428L. Its cargo blind is also one of the easiest to use, sliding away effortlessly into its own little compartment when not in use.

The only caveat is, the Civic achieves this by eschewing any form of spare wheel. Instead, you are supplied with a tyre inflator and repair kit, not ideal if you travel long distance regularly. 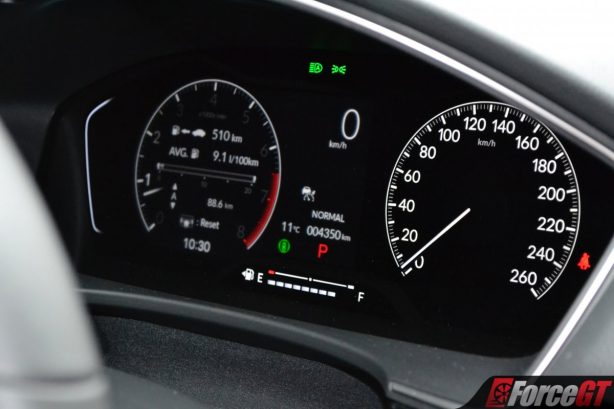 Unlike some fully digital instrument clusters of its rivals, the Civic’s instruments is semi digital with a 7.0-inch LCD consisting of a tacho and driver information display, along with an analogue speedo. Despite the unconventional pairing, Honda has integrated both seamlessly.

Its new infotainment system is also a great step forward compared to the previous generation in terms of presentation and usability but the omission of a sunroof, speed sign recognition and head-up display is disappointing.

Safety wise, you get:

We are glad to report most of the Civic’s driver assist system works well, including its adaptive cruise control which doesn’t jam on the brakes when the vehicle ahead turns off the road.

Under the low-slung bonnet is an evolution of the 1.5-litre turbocharged four-cylinder petrol which has been revised to liberate a token 4kW of power, although a more substantial 20Nm of torque. With 131kW and 240Nm, the Civic VTi-LX feels eager and lively but is no hot hatch. That, we will have to wait for the Type R. 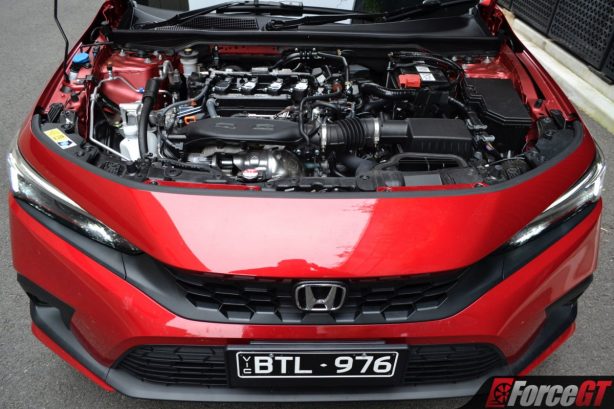 The extra fire power is directed to the front wheels via a revised CVT automatic which is more responsive and ‘conventional’ feeling than before. While not a big fan of CVTs, it does a great job in giving the Civic a light and peppy feel, and only feels strained and tinny when you’re heavy on the accelerator.

Happily, all is forgiven when it gets going.

That’s because Honda has thoroughly revised the Civic’s chassis to eliminate NVH (noise, vibration and harshness) and it’s evident the moment you hop into the car.

Its ride is smooth and compliant for comfortable cruising and when the road turns twisty, the Civic feels as sporty as it looks. Its encouragingly light and agile on its feet and has an unsullied ability to tackle bumps, especially the dreaded mid-corner ones. 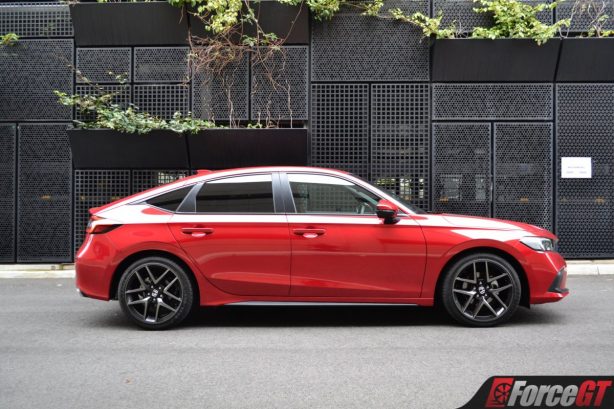 The adaptive electric power steering is brilliantly weighted, direct and accurate, and it turns in with wonderful eagerness along with tonnes of grip.

It also offers a number of driving modes, allowing you to tailor the car’s performance to your driving style and road conditions.

In short, the Civic’s chassis feels beautifully balanced and has the hallmark of Honda’s of old. It blends sporty performance with a new level of refinement and craftsmanship that pushes it into the ‘affordable’ premium territory. And it certainly has the price tag to match!

In terms of ownership cost, Honda offers a five-year, unlimited kilometre warranty and five years complimentary roadside assistance. It needs a service every 10,000km (which is 5,000km shorter than most of its rivals) or 12 months, with the first five scheduled services coming under $200.

On test, we averaged 8.3L/100km, well above the official 6.3L/100km on the combined cycle. The good news however is, the Civic will happily accept 91 RON, which will save a few dollars every time.

One of the biggest downsides to the Civic VTi-LX is its price. In Australia, it is priced at $47,200 drive-away. This is $7,600 more than the outgoing Civic RS model, which may be a tough pill for some buyers to swallow. However, considering the car’s impressive performance and features, it may still be worth it for those who are looking for a high-quality compact car.

Overall, the 2023 Honda Civic VTi-LX Automatic is a well-rounded car that offers a winning combination of style, performance, and comfort. While its price may be a sticking point for some buyers, the Civic VTi-LX is still a great choice for those who are looking for a compact car with a touch of class.