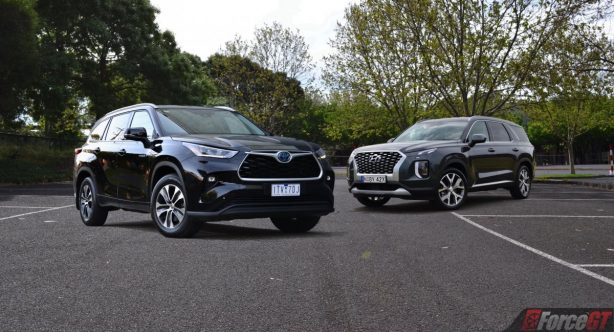 Let’s admit it, other than a limo the most stylish way to carry many people is still by using a seven-seater SUV. It’s become an essential part of life for many Australian families. From school runs and drive-throughs to road trips and bush trekking, the large SUV cannot be done without for growing, active families.

And here we compare the segment dominating Toyota Kluger against the up and rising Hyundai Palisade.

A household name for decades, the Kluger needs no introduction. It’s been the go-to model for no nonsense family transportation, thanks to its maker’s impeccable reputation for reliability, decent performance and strong resale value.

The Palisade is new to the segment, but thanks to Hyundai’s rising dominance, has no dramas penetrating the market. It’s the company’s largest SUV and from the outset it looks ready to take on the mighty Kluger.

On test were the mid-tier models from either camp. The Kluger is represented by the GXL Hybrid variant, while the Palisade is fronted by the Elite Diesel. Both vehicles have all-wheel drive and are more fuel-efficient alternatives to their thirsty V6 petrol-powered counterparts.

The Kluger GXL Hybrid eFour is priced from $63,650 while the Palisade Elite Diesel AWD asks for $66,200 (MY22 pricing). Both stickers exclude on-road costs. 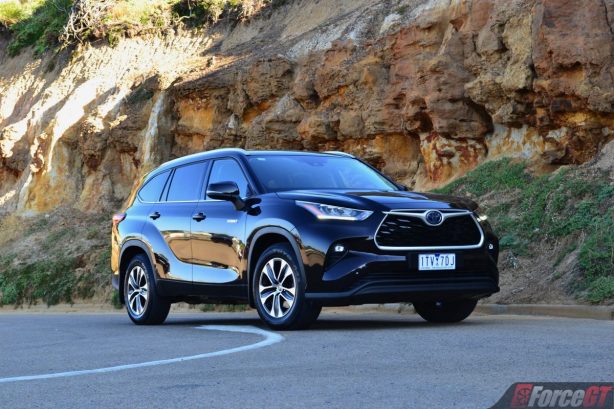 The Kluger gets its design inspiration from the least expected source within Toyota’s portfolio – the GR Supra. Yes, design cues from the sports car are everywhere on the Kluger. There are blacked out A pillars, pronounced rear haunches and stretched taillights. The lines and creases hide its girth pretty well. While you still wouldn’t describe the Kluger as sleek, it’s certainly one of the more stylish large SUVs out there. 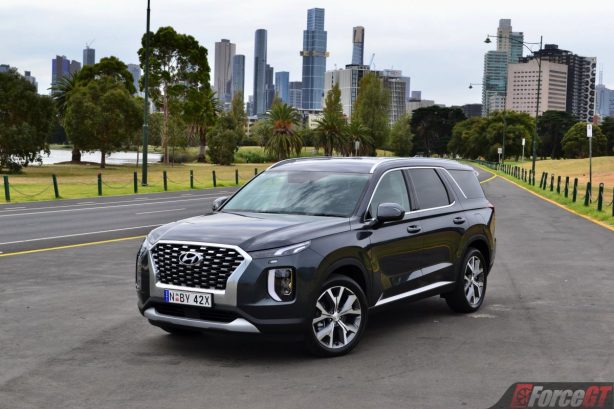 In contrast to the Kluger, the Palisade design is more formal and conventional. The side profile has an apparent two-box design that looks bulkier than the Kluger. The blocky theme is adopted in the front with that large squared off grille and in the rear with those vertical taillights. Road presence is undoubtedly stronger in the Palisade.

The Kluger GXL rolls on 18-inch wheels, while the Palisade Elite has larger 20-inch items. The latter is also the larger vehicle, by some 14mm in length and 45mm in width.

It’s not easy to match style with practicality but Toyota has managed just that in the Kluger interior. While it’s not exactly special inside, it’s clear that considerable effort has been made to ensure a pleasant and balanced design throughout, with heavy focus on functionality and usability. For instance, the large bottle holders in the doors have no obstructions around them so your bottle drops into place easily. Elsewhere, the trays in the dashboard not only serve to break up the chunkiness of the dashboard but also provide extra storage. The cup holders are of decent size and the storage compartment under the front centre armrest is just massive. 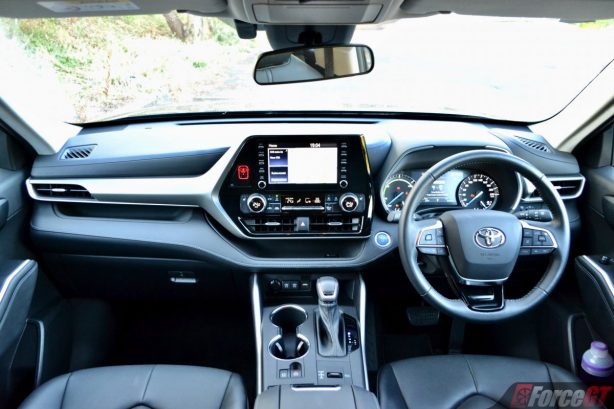 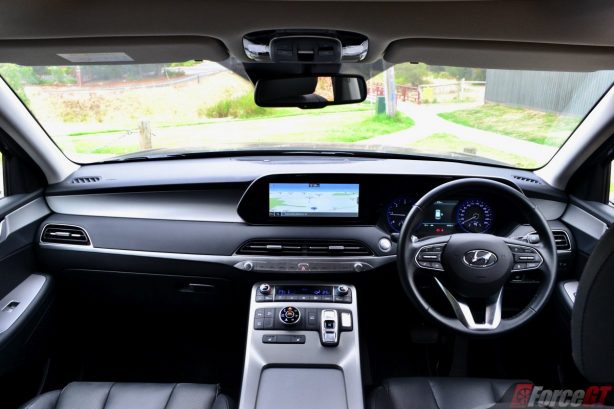 Like the exterior, the Palisade’s cabin carries a more serious, business-like vibe. It’s the more classy interior, but with that also comes a less effective use of space. The upper dashboard looks chunky with no real purpose, and while there’s a huge open storage space under the centre console, not everyone wants to leave things out in the open when the vehicle is parked and left unattended. Sure, there’s the enclosed centre storage but it isn’t as big as the Kluger’s. The front door bottle holders are okay but it’s a bit of a squeeze to get larger bottles through. However, the rear doors offer not just one but two cup holders each.

When it comes to cargo capacity, the Palisade completely triumphs the Kluger. With all seats up, there are 311 litres of boot space, and with them tumbled the space expands to 1,297 litres. In comparison, the Kluger measures 241 and 1,150 litres respectively.

The Palisade has a slightly larger interior space due to its longer dimension and more boxy design. While space in the first and second row seats is equally generous in both SUVs, the third row is less tight in the Palisade.

Being SUVs, the third row in both vehicles is, of course, not comparable to the space offered by people movers. However, adults will be able to stretch out just a little more in the back of the Palisade. There’s more headroom and legroom back there. 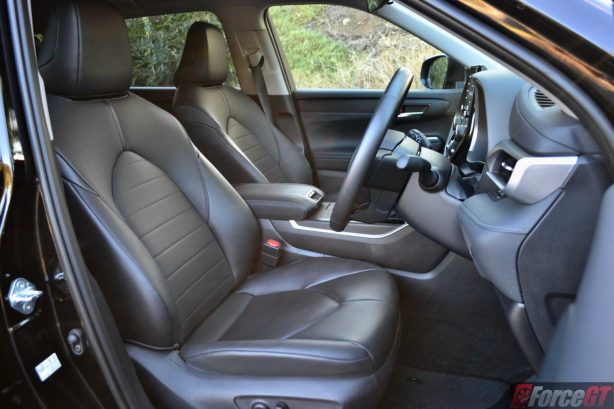 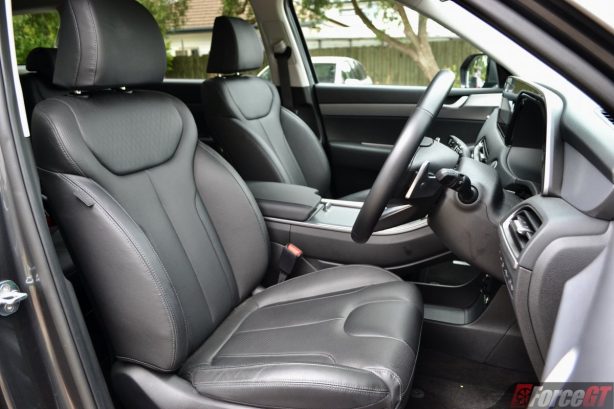 The Kluger does score better when it comes to seat comfort though. The seats are better contoured to the body and a little more breathable as well. While the Kluger has the conventional 2-3-2 seating arrangement, the Palisade’s seats are arranged in a 2-2-3 format, with the second row made up of the so called “captain seats”. They are essentially individual seat with armrests.

The Palisade does offer a conventional bench seat for the second row, creating a seating arrangement of 2-3-3 for a total of eight seats. 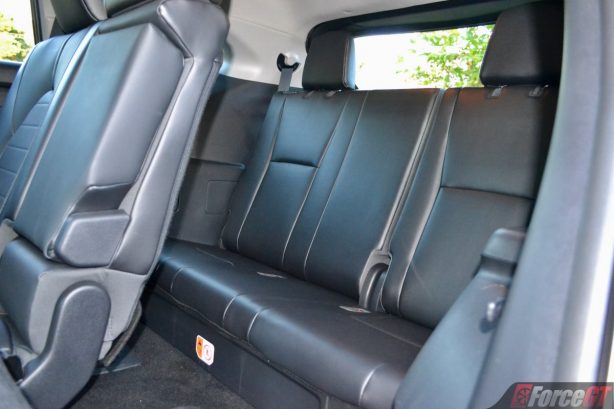 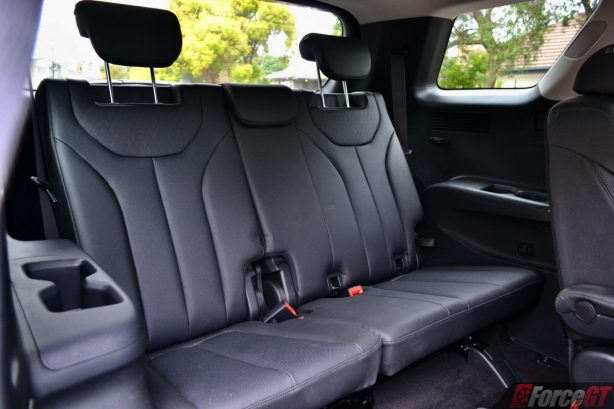 Third row access is equally good in both SUVs. In the Palisade, a press of a button at the second row seat base is all that’s needed to slide and fold the second row forward. In the Kluger, a pull of a lever does the same trick. The liberated passageway to the third row is fairly generous in both vehicles.

Technology is a close match between these two. Essential connectivity such as Bluetooth, Apple CarPlay and Android Auto phone mirroring, and USB ports front and rear are all featured in both vehicles. There are also DAB+ digital radio and built-in satellite navigation in both cars. 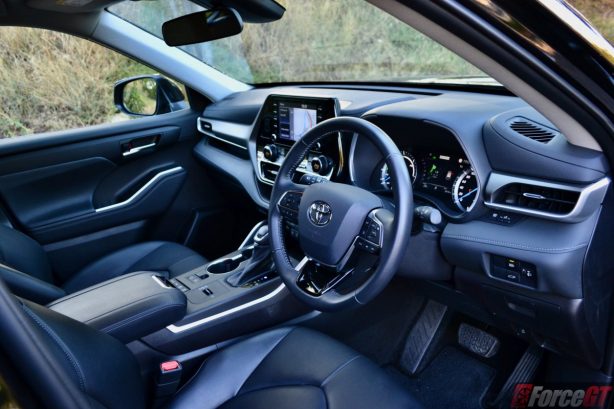 Where the Kluger trails the Palisade – massively – is in the infotainment touchscreen. Despite being a newer model, the Kluger still makes do with a relatively small 8-inch touchscreen. The dated looks of the graphical user interface aren’t helping either. The rows of physical buttons on either side of the screen are foolproof though. 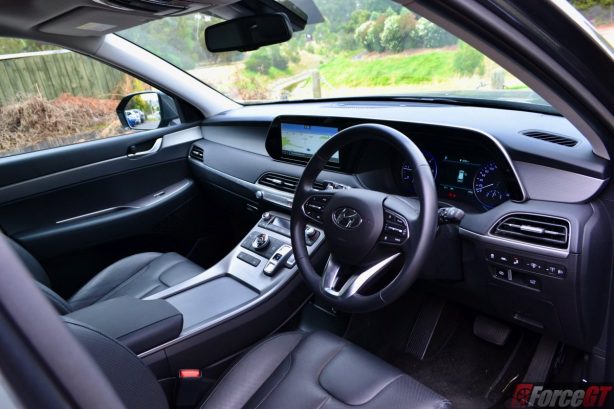 The Palisade’s 10.25-inch touchscreen is larger, has better clarity and is more responsive to the touch. Its menu structure is also more intuitive. That said, some of the onscreen buttons are too small and, on the move, nowhere near as handy as the Kluger’s physical buttons.

Both vehicles take safety seriously. Essential safety features included on both vehicles are:

The Kluger’s inclusion of a driver side knee airbag brings the total number of airbags to 7, one more than the Palisade. Real-time speed sign recognition is also only fitted on the Kluger.

Buyers have long wanted a more fuel economical Kluger variant to compliment the aging 3.5-litre V6 petrol model. So, for the first time ever, the Kluger hybrid answers that call. It’s powered by a 2.5-litre four-cylinder petrol engine driving solely the front wheels via a CVT automatic, backed by two electric motors – one at the front axle and another at the rear axle.

Toyota calls this all-wheel drive system the eFour, an on-demand system where the rear axle is powered only by the rear electric motor, eliminating a drive shaft. The electric motor engages during acceleration or when there is low traction. 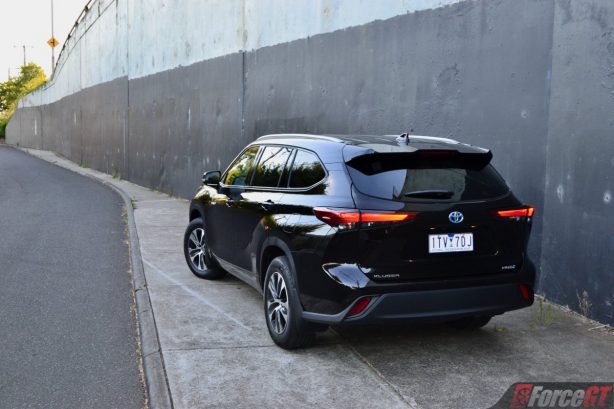 The total combined output is rated at 184kW of power, with 242Nm of torque peaking at 4400rpm. While the figures may seem like a significant deficit over the V6, they only tell part of the story. The trick is that near instantaneous torque from those electric motors, giving the large SUV a good push rolling off before the engine kicks in to provide additional power.

With decades of hybrid experience, Toyota seems to have perfected the hybrid drivetrain. It remains the best hybrid system on the market. Driven normally, it feels almost like a full EV. The transition from electric to engine power is so discrete it’s hardly noticeable, and on braking or coasting the battery is effectively charged up.

The catch is that it demands premium unleaded fuel (95 RON). Still, with a rated combined fuel economy of just 5.6L/100km, there will be plenty of savings at the bowser in the long run compared to the thirsty V6. 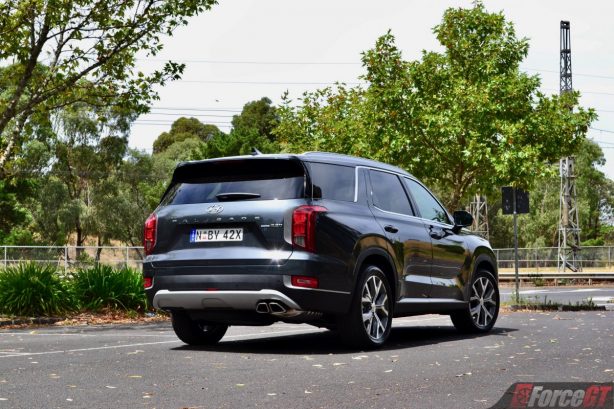 The Palisade’s 2.2-litre four-cylinder turbo diesel engine has some good grunt down low, with it serving up a potent 440Nm of torque from 1750-2750 rpm. Peak power is rated at 147kW at 3800 rpm. The engine is paired with a mechanical all-wheel drive system with a drive shaft, clutch packs and stuff, and drives through an eight-speed automatic transmission.

Against the Kluger, the Palisade is more of a workhorse. Always keen to dig deep, it’s better at cresting hills or ploughing through a rough patch while hauling a full load.

The oil burner does make itself known when you pile on the revs, but for the most part it’s quiet. Of course, the Kluger hybrid is still the quieter SUV of the pair.

Combine fuel economy for the Palisade is rated at 7.3L/100km.

Despite being a large SUV, both the Kluger and Palisade are hardly a handful in the urban jungle. Their car-like demeanor makes them excellent daily driven family SUVs. That said, you will be constantly aware of their sheer size, especially around tight shopping mall car parks. 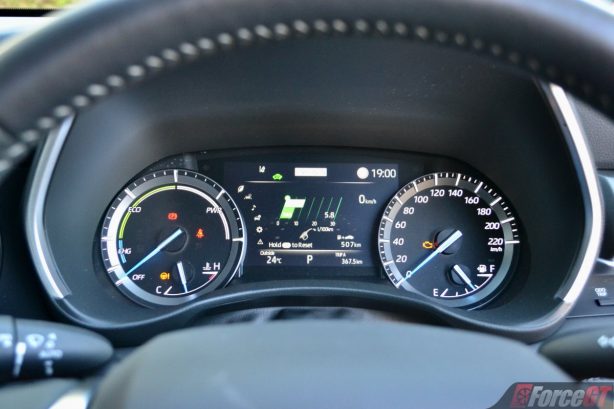 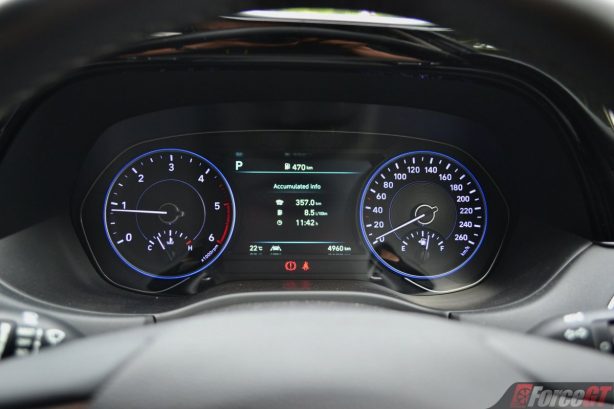 The Kluger does edge the Palisade a little when it comes to handling, with it having slightly better composure, better steering feel and smoother response to driver inputs. Make no mistake, the Palisade is also competent, but that numb steering and larger footprint dampen things a little around corners.

In the real world, the Palisade stays faithfully close to its rated fuel economy, recording 7.5L/100km on the combined average. At the other camp, the Kluger returns 6.6L/100km, making it the more fuel economical of the pair.

With so many criteria to consider, choosing the right family SUV can involve quite a bit of thinking, and in the case of the Kluger and Palisade, it’s never straightforward to put one ahead of the other.

If you’re after more cargo space, a better infotainment system and larger towing capacity, the Palisade diesel might be the one to go for. But from design and refinement to handling and fuel economy, the Kluger managed to stay just that much more ahead. 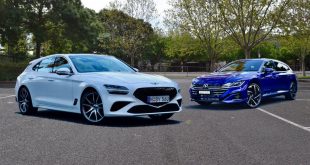