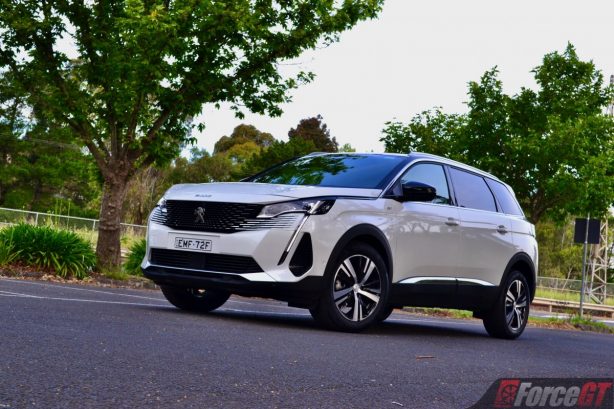 You need seven seats but don’t want to drive a bulky people mover. You want the looks of an SUV but don’t need all-wheel drive. Does something like this exist? Yes it does, and it’s called the Peugeot 5008.

Of course, the 5008 isn’t the only player in this space, as the Mazda CX-8, Nissan X-Trail, Mitsubishi Outlander and Volkswagen Tiguan Allspace are all also two-wheel drive, seven-seater SUVs. The Peugeot is priced at the higher end of the segment though, costing dearer than all the Japanese entries, undercut only by the German car. 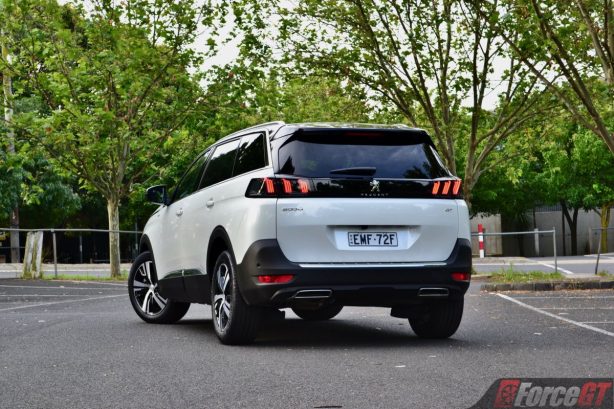 As with the recent offerings from Peugeot, the 5008 looks sharp and premium. The shape of the current second-generation model has been around since 2017, and it’s such a drastic change in the right direction from the quirky first-generation model. Already a stylish design, the exterior has been updated last year as part of a mid-life refresh, bringing even more appeal. The new 5008 boasts contemporary styling that would stand out on our increasingly SUV saturated roads. 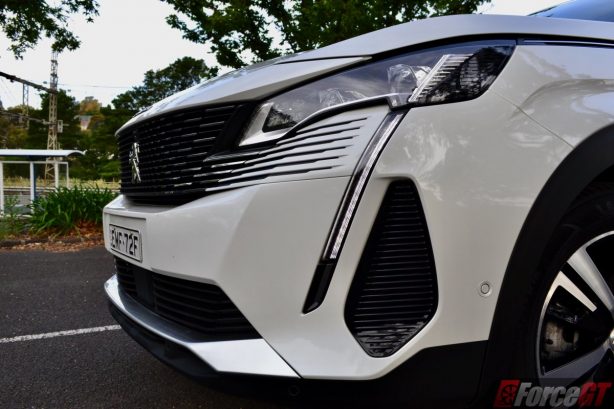 We absolutely dig the new front fascia which features a distinctive grille that blends into the headlamps. Combined with the daytime running lights that extend deep into the bumper, the 5008’s road presence is unmistakable.

The fender creases emphasis motion, while the black wheel arch mouldings convey athleticism. The quintessentially French look is finished off with a layer of sophistication brought upon by the black roof, black side mirror caps and polished chrome window highlight. 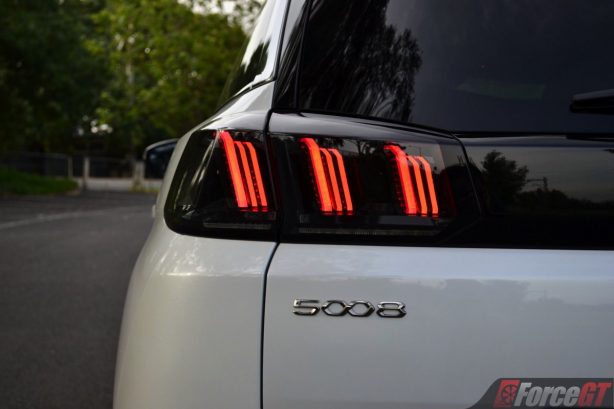 The interior of the 5008 radiates a premium and contemporary vibe that rivals those found in more expensive luxury cars. The ultra modern design is characterised by a layered dashboard with a functional and ergonomic layout – something often compromised in trendy designs. 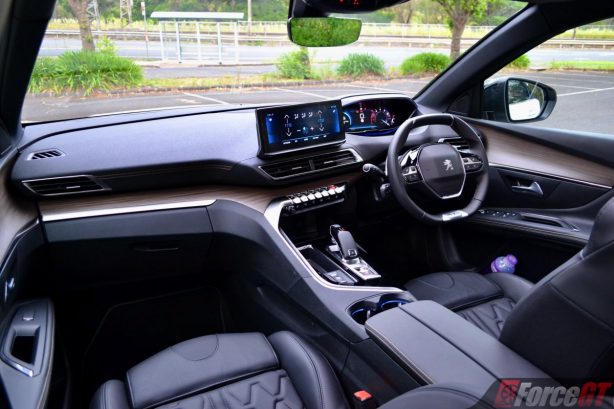 Central to the dashboard is what’s called the Peugeot i-Cockpit. The driver orientated space age-like cockpit boasts a 12.3-inch fully digital instrument cluster that sits above a compact steering wheel. Peugeot calls it the heads-up digital display and it’s meant to be viewed from above the steering wheel, not through it. It might take a bit of getting used to for the first time user, but we have started to like it after just a few hours behind the wheel. 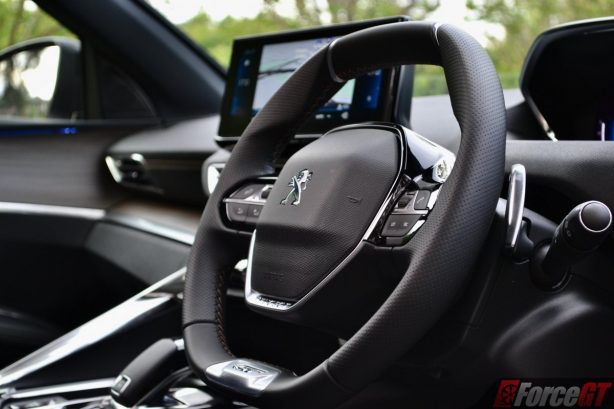 The digital display is fully customisable, from the colour of the animated gauges to the option of having the navigation map displayed. The odd inverted tachometer aside, it’s a very cool display.

Perched in the centre of the dashboard is a second 10-inch touch screen wide display (up from 8-inch previously) from which various functions such as climate control, media and navigation are operated. The display serves up high clarity graphics and the interface is intuitive and very responsive to the touch. The built-in satellite navigation also works well, so do Bluetooth pairing, Apple CarPlay and Android Auto connectivity. 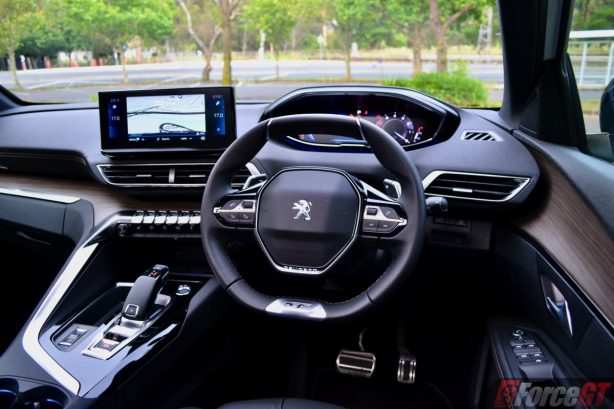 What doesn’t work that well is the 360-degree surround view camera, which fails to properly load the vision almost every time. For such an important feature, you’d expect it to be fault-free.

Another annoyance is the embedded climate control function. On the move you’ll need to takes your eyes off the road to adjust the settings on the screen. Nothing beats the good old rotary knob for function like this. Thankfully though, a knob is fitted below the touchscreen to operate the radio/volume. 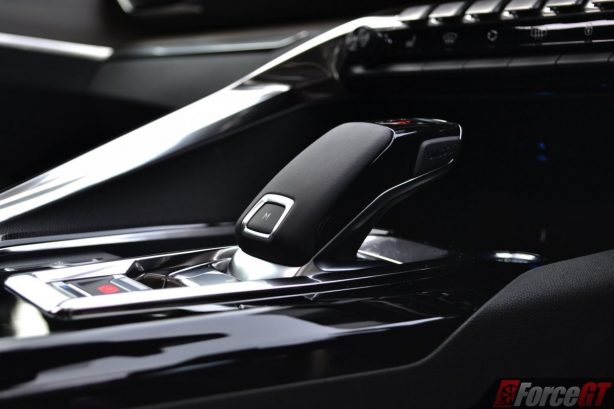 The cabin feels exceptionally high quality thanks to top shelve materials used throughout. Soft touch surfaces adorn not just the upper part of the dashboard but also the lower trims, and boy do those the piano key shaped buttons in the centre console look good. Elsewhere, aluminium and gloss black trim inserts combine with interior mood lighting to lift cabin ambience.

Our test car came fitted with the optional Nappa leather upholstery with grey top stitch and they too feel exquisite. Opting for the Nappa leather option also sees the dashboard and door card cloth pieces replaced with genuine Lime Wood, adding to the luxurious feel. 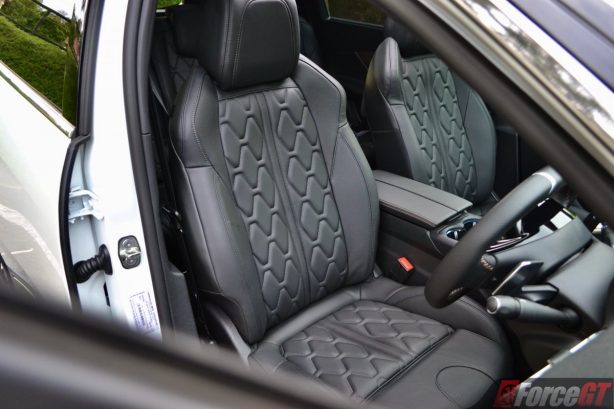 In terms of seating, front occupants are the most pampered. They enjoy the luxury of heated seats and adjustable cushion nose. The driver seat has 8-way electric adjustment and a multi-point massaging function with selectable massaging modes. The latter is brilliant for freshening up during a long drive, as the inflatable massaging air pockets do press hard on your back and shoulders in their highest setting. In fact, the massaging seat is almost as good as those found in high end luxury cars.

The second row seats are just as comfortable, with them far from being just a flat bench seat like in many cars. They’re equally sized and there’s good support across all three seats, even the middle seat. Headroom and legroom is generous, and the floor is perfectly flat thanks to the absence of a driveshaft hump. Those seated in the outboard seats have access to a picnic table which drops down from the front seat back. It can be used for meals, or for placing a tablet or laptop computer. 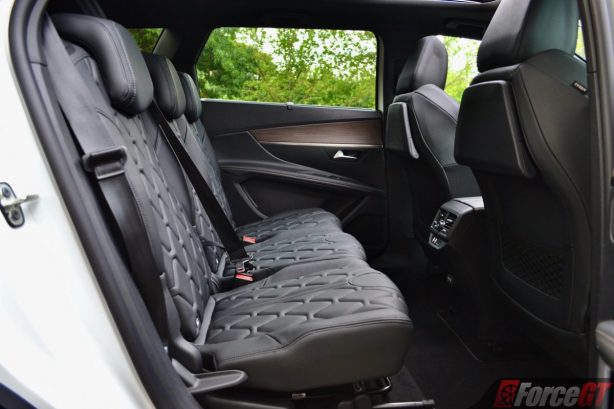 Other comfort features available to the second row passengers include retractable sun blinds in the rear doors and rear air vents with its own fan speed control. The latter feels a bit weak on hot days as even with the fan cranked to maximum there isn’t much air discharged.

Access to the third row is a not-so-convenient two-step process. You operate a lever to fold and another level to slide the second row forward, clearing a small passage to the back seats. It’s obvious who those seats are for the moment you attempt to climb into the back (as an adult). It’s a tight squeeze to get in there. While headroom may be just fine if you’re not too lofty, the lack of legroom means your legs will be bent.

For short trips around town, the average adult may use those back seats as a last resort, but really they are meant for small children. 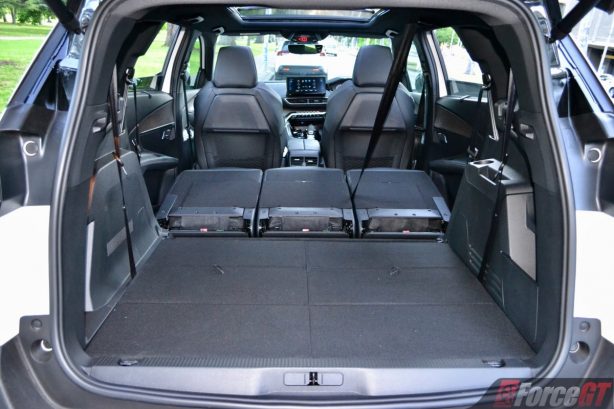 The 5008 has one of the most versatile seat arrangements in the segment. The front passenger seat can be folded flat, the second row seats can be independently folded and the third row seats can be stowed or removed completely without tools.

In seven-seat mode, there’s 236 litres of boot space – not a lot but still enough to fit two small suitcases. In five-seat mode, the space expands to a decent 591 litres, and with just the front seats up there’s a massive 2,042 litres of capacity. Remove the third row seats and you gain another 106 litres for a total of 2,150 litres. This makes the 5008 one of the biggest cargo haulers in class, despite its medium dimensions.

It’s not just the boot space that is impressive, as the 5008 also has decent storage littered around the cabin. The door pockets are usefully thick and deep (which also come nicely padded) and the centre console storage compartment is so massive it can swallow a couple of mineral water bottles. The glove box is painfully tiny though.

On test was the Peugeot 5008 GT petrol which is powered by a 1.6-litre turbocharged four-cylinder petrol engine. The mid-life update sees a bump in power and torque figures to 133kW (plus 12kW) and 250Nm (plus 10Nm), the latter arriving at just 1650rpm.

The automatic transmission has also been upgraded from 6-speed to 8-speed, better harvesting power from the uprated engine and improving fuel economy. 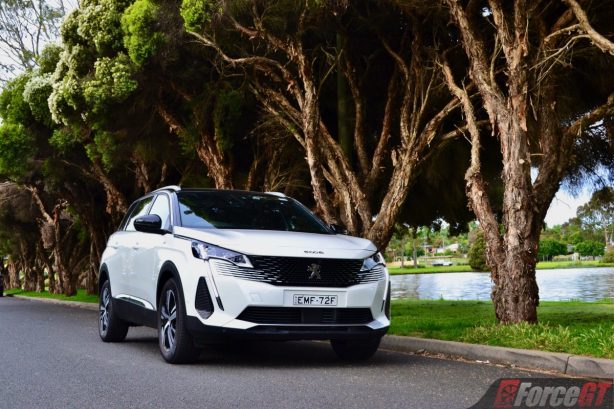 The drivetrain is smooth for the most part, with one of the best refinement levels in the mainstream segment.

Lightly loaded with three to four people on board, the 5008 takes on the daily grind with ease, with the engine staying relatively relaxed and effortless. Packed to the rafters though and you’ll need to pile on the revs to get going.

A combination of light weight (1521kg), a well tuned suspension and quick steering endows the 5008 with sprightly handling that is very car-like. Where some other heftier, bulkier SUVs or people mover feel clumsy at the turn of the wheel, the Peugeot stays diligently faithful to driver inputs. Its relatively flat posture around corners further instil confidence.

Ultimately though, a family car like the 5008 needs to be comfortable around town and on that front the Peugeot doesn’t disappoint either. The ride is compliant, with only the nastiest potholes or undulation able to unsettle the car. And when that happens, there’s a fair bit of crashing and jittering within the cabin. 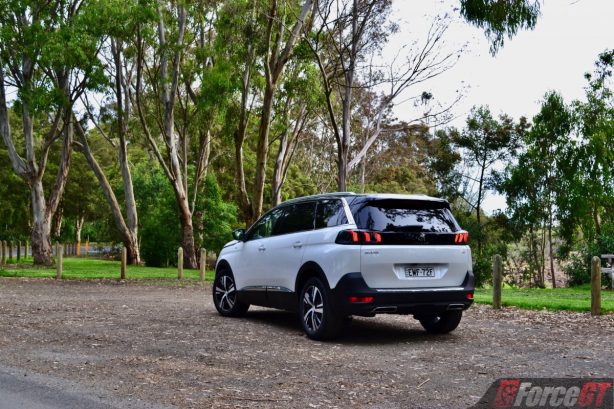 When the roads aren’t dramatic, the cabin is a calm and quiet place for the family to enjoy their trips. Noise, vibration and harshness (NVH) levels are low and the engine is mostly muted.

Fuel economy on the combined average is rated at 5.6L/100km for the 5008 petrol, but that’s a little optimistic. Expect the figure to hover around 8.0L/100km in the real world, like how we managed 7.8L/100km after 800km of mixed driving. It’s still a reasonable figure for a medium size seven-seater SUV. Just be mindful that it chews on RON95 premium unleaded fuel.

The Peugeot 5008 is no doubt a looker inside and out. The styling is contemporary and the vibe is premium throughout. There’s good practicality, too, backed by decent driving performance. You just have to put up with a bit of quirkiness and a few minor electronic gremlins.