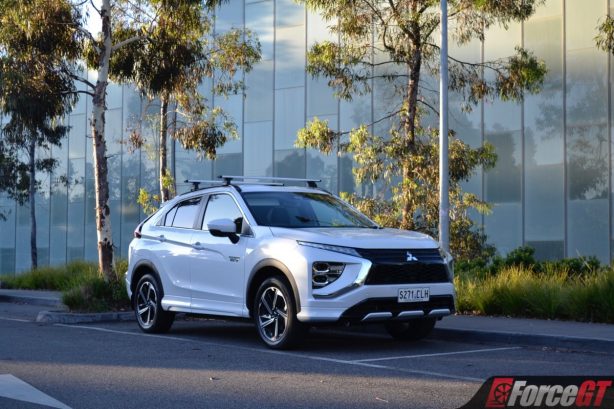 The Mitsubishi Eclipse Cross seems to be a trailblazer model for the brand. It was the first to sport the fashionable coupe SUV styling when it first landed in 2018 and now in 2022, it is the first model in its class to introduce a new high-tech plug-in hybrid (PHEV) electrified variant.

Along with the new powertrain, the Eclipse Cross has also received an edgy facelift for 2022 though it still retains the swoopy roofline from before. Throw in a trick two-motor all-wheel drive and the electrified Eclipse Cross seems like an interesting proposition.

Sitting below the evergreen Mitsubishi ASX, the updated model has undergone a growth spurt and, is ironically, longer than the ASX at 4,545mm vs 4,365mm. In fact, it’s only 5mm shorter than the benchmark Mazda CX-5. Prices have headed north, too.

So, is the Eclipse Cross a worthy contender in the electrified arena? Let’s find out.

How much is the Mitsubishi Eclipse Cross Plug-in Hybrid?

For reference, a petrol-only Exceed AWD comes with a $40,790 before on-road cost sticker, which is roughly $16,000 cheaper. Yes, a closer comparison would be the Eclipse Cross ES or Aspire, but neither comes with AWD.

Despite supply shortage, it’s worth keeping an eye out on the official Mitsubishi offers page for deals.

Who are its competitors? 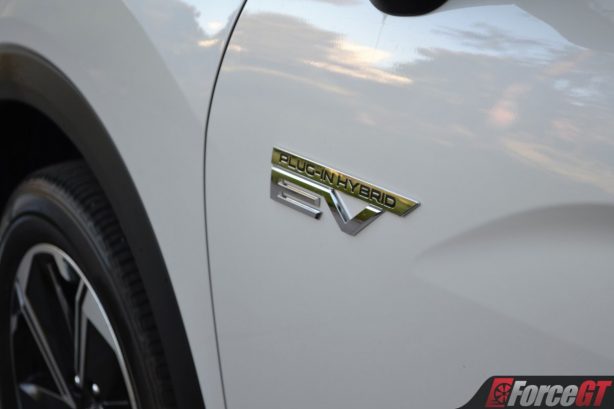 If you can forgo the SUV body and AWD, there’s also the highly delightful Hyundai IONIQ Plug-in Hybrid at $47,950.

What features do you get?

As you would expect, the entire line-up is reasonably well equipped. Starting with the ES, you get:

Stepping up to the Aspire brings the following on top of the ES:

The range-topping Exceed gains the following over the Aspire:

You can also download a smartphone app for all variants that enable you to remotely check the car’s status, location, charge schedule, or pre-cool/heat the cabin. 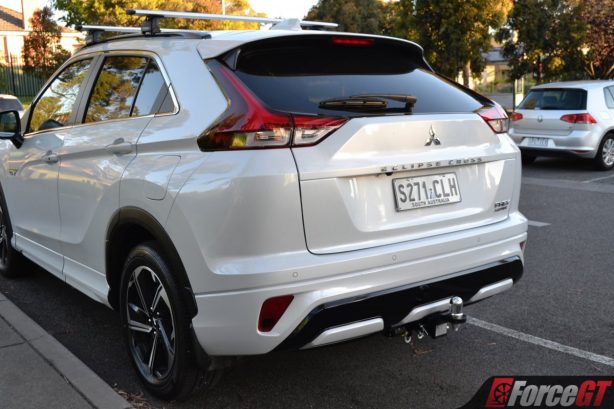 You might notice our tester is equipped with a number of genuine Mitsubishi accessories, including roof rack cross bars with roof rails ($602) and a tow bar kit ($1,202). For a full list of accessories, you can check out Mitsubishi’s accessories page.

How safe is the Mitsubishi Eclipse Cross Plug-in Hybrid?

The entire Mitsubishi Eclipse Cross range, including the Plug-in Hybrid is a five-star ANCAP crasher.

All variants come with: 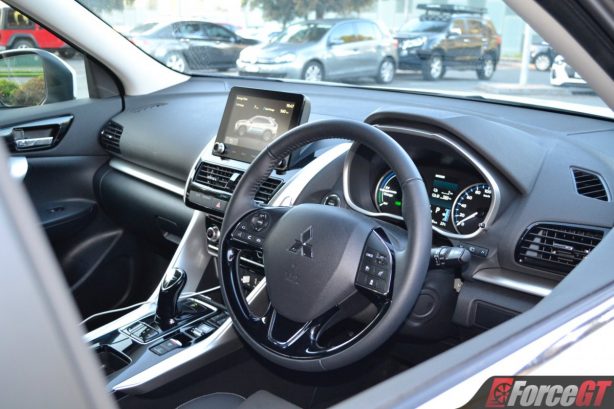 Like the exterior, only the eagle-eyed can pick the Plug-in Hybrid from its conventionally powered siblings as the interior isn’t all that different safe for the EV meter which replaces the tachometer, an electric park brake and a model-specific electric gear lever.

Unlike the thoroughly modern interior of the new Outlander, the Eclipse Cross’ interior is stuck somewhat in the last decade with acres of piano black and silver plastic trim. They aren’t in anyway offensive but do look dated compared to some modern interiors.

It’s a similar story with the infotainment screen with its outdated and basic tiles, although Apple CarPlay tends to fix this. There is also no digital speed display in the Aspire as that is only available on the range-topping Exceed with heads-up display. 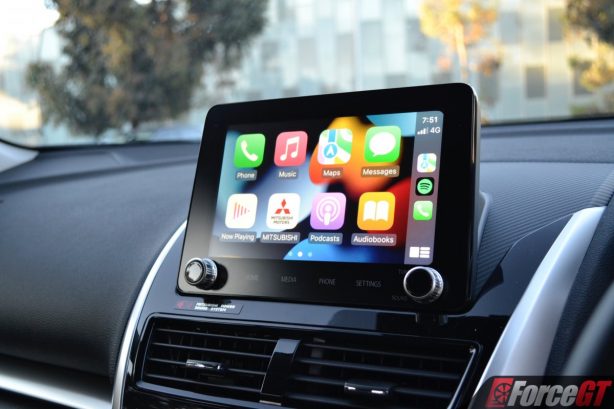 On to some better news. The physical buttons on the steering wheel are clear and simple to use, while the traditional knobs on the infotainment system and climate control are refreshingly user friendly compared to some buttonless rivals.

There are plenty of storage on offer within the cabin, too, with bottle holders and trenches in the doors, a good-sized centre console bin, a pair of cupholders between the front seats (in the flip-down armrest for the back seats) and a decent-sized glove box. There are two USB ports up front.

The front seats are comfortable while the back seats feature reclining back rests. Rear seat legroom and toe room are good, though headroom is slightly hindered by the roof design.

Overall, while the interior is hardly special, it’s functional, well-built and ergonomically sound.

How big is the Eclipse Cross’ Plug-in Hybrid boot?

Due to the extra batteries, the Plug-in Hybrid’s boot space is 46L smaller than petrol version at 359 litres. There is also no spare wheel available, not even a space saver. You’re provided with a repair kit.

The 40/60 split rear seats fold down and provide up to 1,541mm in length for longer items. With all five seats in use, boot length drops to 677mm. 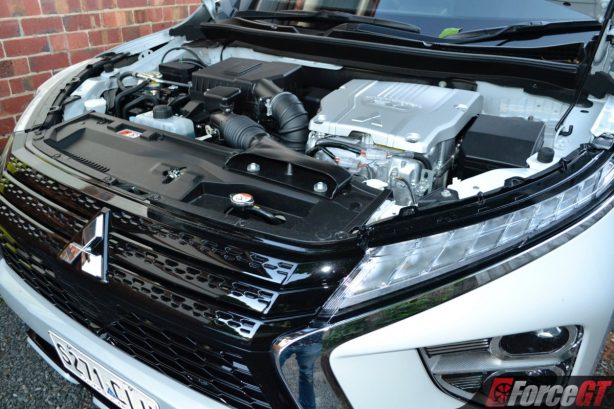 The petrol engine produces 94kW and 199Nm, the front motor puts out 60kW/137Nm, while the rear motor produces 70kW/195Nm. Mitsubishi doesn’t offer a combined output figure, so your guess is as good as ours.

Mitsubishi claims an electric only range of 55km on the NEDC cycle but our test average is around 40-45km with fully charged batteries each day. Still, this is sufficient to cover most people’s daily commute. There’s also brake-energy recuperation, which could prolong the driving range by a smidgen and is adjusted through the paddle shifters. 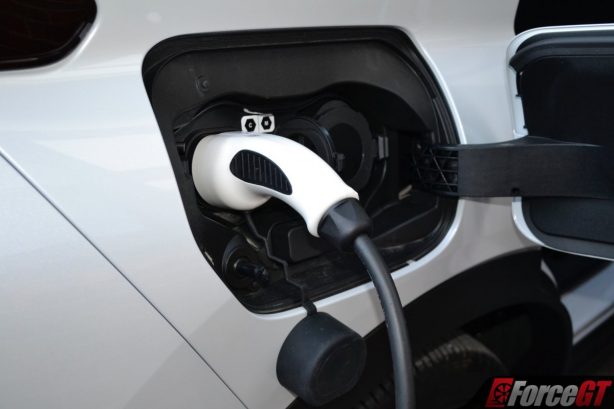 The batteries take around 6.5 hours to recharge from a household power point, 3.5 hours from a wallbox and 25 minutes on a DC fast charger. The car defaults to full EV mode as long as the battery has sufficient charge and you’re not going crazy with the accelerator.

Once depleted, the car will switch to Series Hybrid mode and enlists the engine to charge the batteries which then feed the motors.

Finally, when in a hurry, there’s the Parallel Hybrid mode where the combustion engine drives the front wheels directly via a clutch, while simultaneously generating battery charge for each motor. 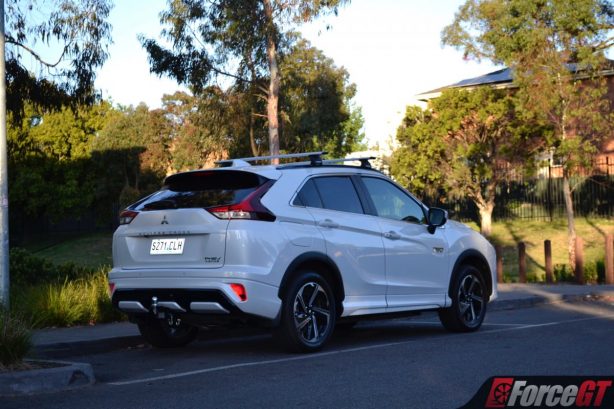 The entire hybrid system operates seamlessly, and you get a taste of electric driving without ever having to worry about running out of charge.

You take off quietly in stealth and when required, say for overtaking, the engine kicks in to assist with extra propulsion, much like a normal Toyota RAV4 Hybrid. It’s not overly quick but it feels effortless.

And because it’s AWD, you never struggle for traction. Unlike the Super All-Wheel Control we remember from the famed EVO though, the Eclipse Cross’ is executed by two electric motors that aren’t connected mechanically but instead by wires. As such, it’s actually more responsive than the traditional system.

There are useful tarmac, snow and gravel modes which adjust the torque and ESP accordingly to the different situation.

The ride quality is generally good around town, as well as around corners, thanks to the lower centre of gravity afforded by the batteries. The steering is well weighted and accurate enough, though don’t expect EVO level of precision and responsiveness. 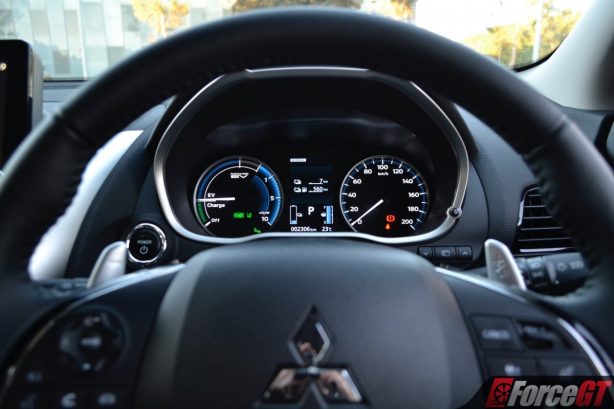 The Eclipse Cross Plug-in Hybrid is officially rated at 1.9L/100km on the combined cycle but our real world figure is closer to 5.6L/100km on a short 300km return trip out of town and with around 42km of pure electric driving at the start.

However, on daily inner-city commute, it’s possible to not trouble the combustion engine at all.

It requires a service every 12 months or 15,000km, with servicing costs ranging from $299 to $799 depending on how major the service is. For full details, you can visit Mitsubishi’s capped price service site.

While the Eclipse Cross Plug-in Hybrid certainly commands a handsome premium over its conventionally powered sibling, in isolation and in amongst its electrified peers, it’s arguably ‘decently’ priced, considering the additional hardware and batteries. It’s also unique in having all-wheel drive, and the reassurance of Mitsubishi’s built-quality and reliability should make it at the top of your list should you be in the market for a small plug-in hybrid SUV.