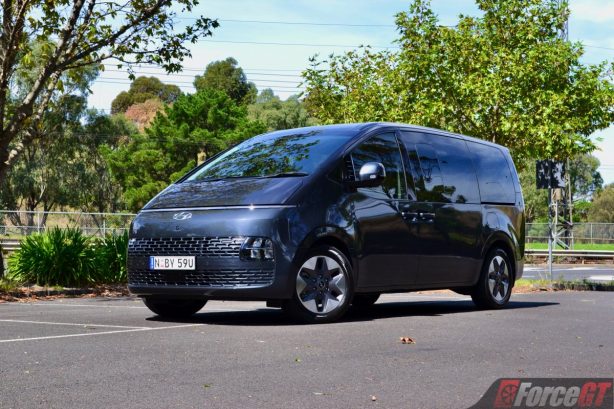 The Staria is Hyundai’s new people mover, replacing the previous iMax. The new name is not just a marketing exercise, it is coined to signal a new era for the mini van – one that does not have to be boring. I mean, just look at the thing. The clean, one-curve silhouette is devoid of clutter, the LED light bar at the front is space-age, and the huge glasshouse is larger than many home windows.

It is a refreshing take on the people mover concept. Drive it around town and it will even turn a few heads. Have you seen a people mover doing that? 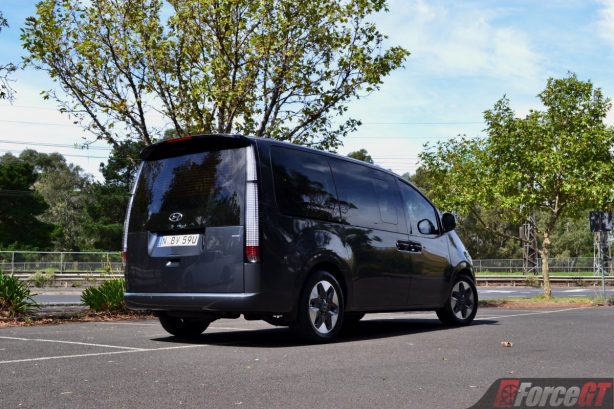 The three-tier line-up starts with the base Staria at $48,500, progressing to the mid-spec Staria Elite at $56,500. The range-topping Staria Highlander has two versions: the rear-wheel drive model lands at $63,500, while the all-wheel drive variant adds $3,000 to the price bringing the final sticker to $66,500. All prices exclude on-road costs.

A look around the competition cues the Toyota Granvia which costs between $65k and $75k, the Kia Carnival asking between $51k and $72k, and the Volkswagen Multivan priced from $63k to $92k.

This means the Staria is the most affordable vehicle in the mainstream people mover segment. Not only that, it is also the only model in class that offers all-wheel drive, perfect for getting to those tricky camping spots.

If you are a commercial operator, the Staria-Load clears the passenger cell for a sizeable cargo bay. But for this review, the focus is on the Staria RWD and Highlander AWD, with which I spent a week each. 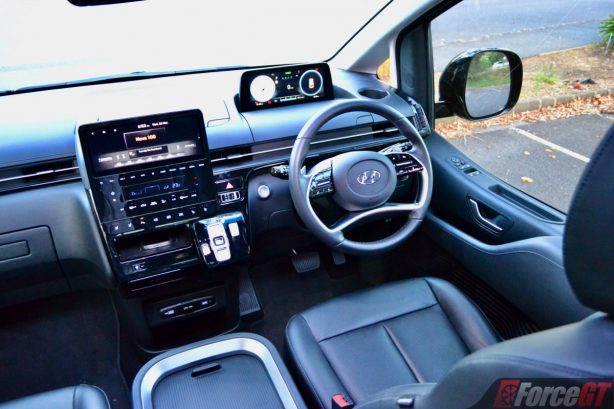 Is there any substance behind those bold looks? Hop on and the answer is apparent. The Staria’s cabin is huge. Not only is it capable of accommodating eight people across three rows of seats, but there is still space left for their luggage, water bottles, backpacks, tablets, smart phones and other odd items afforded by the myriad of storage compartments littered around the cabin.

This is a true eight-seater, which means every seat onboard is large enough for an adult and the headroom and legroom around each seat is spacious enough for its occupant to stretch and move about. All three row of seats get ample of natural lighting through those large windows. It’s no sweat on hot days, too, as the retractable window sunshades for the second and third row seats cover the entire window to keep the heat out. And if that’s not enough, the ceiling-mounted air-con vents do a pretty good job in keeping the cabin cool. The rear has its own dedicated climate controls which can be operated independently from the front row climate controls so peace is guaranteed. 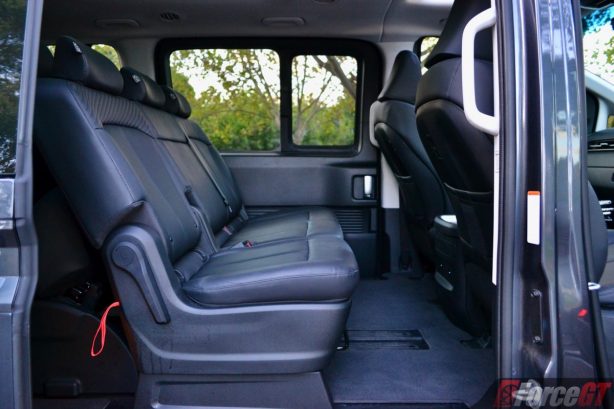 Cabin comfort is stepped up a notch in the Highlander range-topper with heated and cooled front seats and heated steering wheel. Other niceties in the Highlander include a dual panel sunroof with powered rear sunblind, rear passenger view monitor through the centre touchscreen and a 10.25-inch digital instrumentation cluster.

If you have no need for those, the mid-spec Elite is already very well equipped. Leather seats, leather wrapped steering wheel, power adjustable driver’s seat and powered sliding rear doors are all fitted from Elite spec and up. So are a host of multimedia functions including DAB+ digital radio, Bluetooth connectivity, and a 10.25-inch infotainment touchscreen with built-in satellite navigation and support for wired Apple CarPlay and Android Auto (wireless connectivity is strangely only supported in the base model). 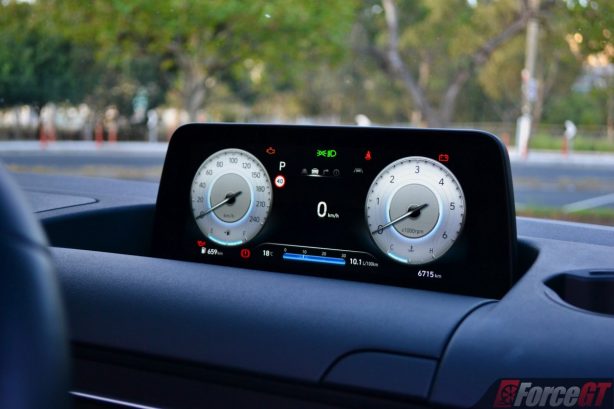 For such a large vehicle though, you’d expect Blind-Spot Monitor to be fitted too, but to have that you’d need to step up to the top-spec Highlander. All variants do get 7 airbags and the maximum 5-star ANCAP rating. 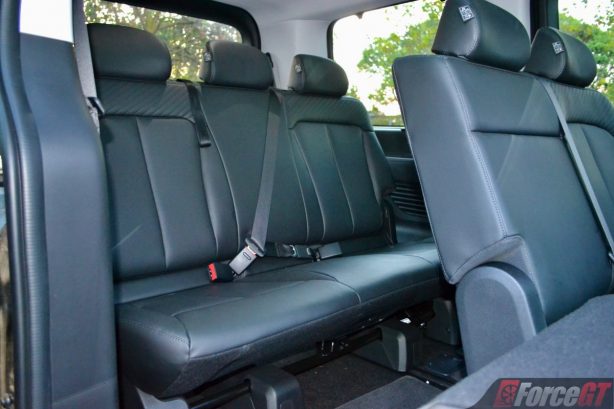 With large sliding doors, getting in and out of the Staria is easy. Access to the third row is a two-step process, first by tumbling the second row seat back, followed by sliding the seat forward. The liberated passage way to the third row seats is one of the widest in class. Seven-seater SUVs can only dream of having such a fuss-free third row access.

Cargo space behind the third row is a cavernous 831 litres. Row three cushions can be flipped up vertically and the seats pushed forward for extra load space. However, they don’t fold away and neither are they designed to be easily removed. With the second and third rows tucked away the space expands to 1303 litres. 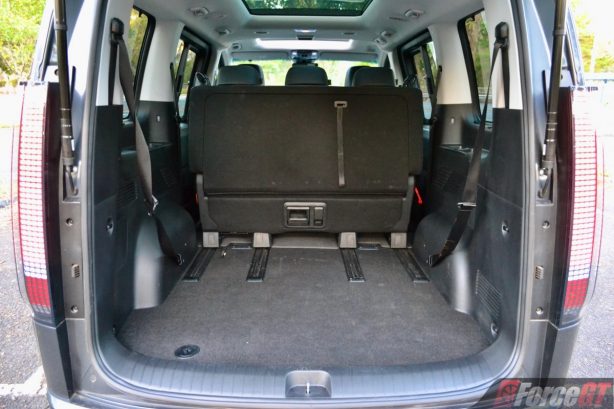 Two engine options are on offer – a petrol 3.5-litre normally aspirated V6 or a 2.2-litre turbodiesel four-cylinder. Both engines deliver good power at your disposal, with the petrol V6 churning out 200kW and 331Nm, and the turbodiesel producing 130kW and 430Nm. As expected, the V6 is the smoother, quieter and more responsive power plant, while the oil burner is inherently louder and lazier.

Both engines are up to the tasks of hauling a full load, however, the torquer diesel feels more effortless doing so thanks to peak torque arriving low in the rev range. If towing is on the agenda, the diesel is definitely the pick over the petrol. Stronger torque aside, the diesel mill can be paired with all-wheel drive, which makes all the difference when it comes to towing a hefty load.

As mentioned earlier, the variable, on-demand AWD will also come in handy when doing some light off-roading. Rear-wheel or front-wheel drive rivals offer nowhere near as good traction as the Staria AWD on loose or slippery surfaces.

Both engines are matched with an 8-speed automatic transmission, which, for the most part, operates discretely in the background without bringing attention to itself. 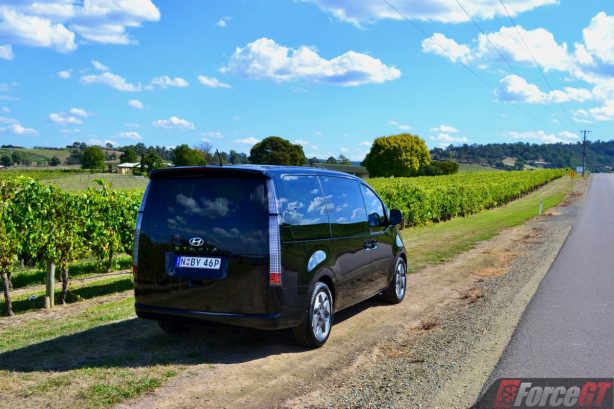 Being a large van, handling is unsurprisingly a bit of a handful, if you have gotten used to driving a car that is. For what it is, the drive is as car-like as it can get. The chassis is rigid and the suspension does a good job in maintaining composure, keeping everything fairly neat and tidy.

Ride comfort is generally good and on broken roads it fairs better than firmer-riding SUVs. The cabin is well insulated from road and engine noise, though wind noise can become apparent at highway speeds.

Every Staria comes with the standard warranty of 5 years with unlimited kilometres. Routine servicing schedule is at 15,000km or 12 months, whichever comes first.

If you need a vehicle that can carry eight people in comfort and safety without burning a large hole in your wallet, the Staria is definitely worth checking out. Its simplistic and modern design stands out from the predictable and bland styling of the competition, while the availability of all-wheel drive adds a never before seen layer of versatility to the people mover.

Sure, the SUV is still cooler and dynamically more competent, but the Staria is better in almost every sense when it comes to practicality and people hauling.