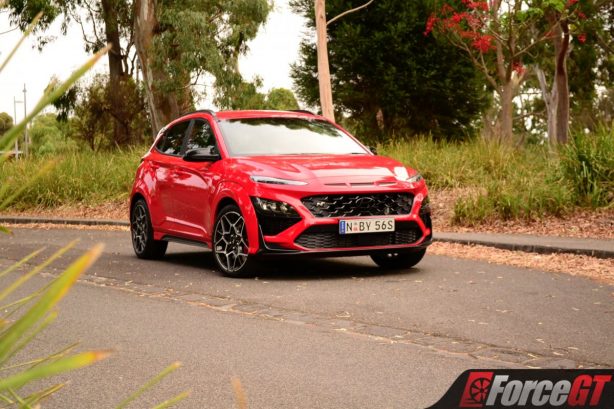 It’s hard not to be impressed with Hyundai. From a humble beginning, its products have continued to improve so much so it’s now one of the biggest and well respected car makers in the world.

And with the establishment of its high-performance N division, the company is now producing some rather desirable vehicles, too. You can say it’s truly come of age. Like the i30 N, the Kona N has undergone intensive rework in its transformation into the N division’s first hot-SUV.

If there’s anything the i30 N has taught us, it’s that the N division can make something truly special out of a regular vehicle.

Employing essentially the same recipe as the company’s first hot hatch, let’s see if the Kona N deserves to be called a Hot SUV.

How much is the Hyundai Kona N? 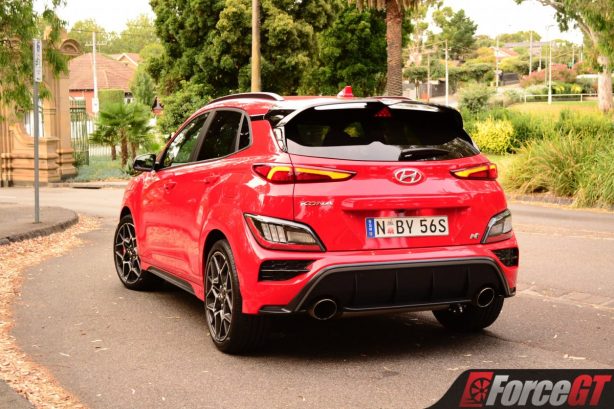 The Hyundai Kona N is priced from $49,200 plus on-road costs, which interestingly, is identical to the i30 N hatch with the same eight-speed dual-clutch transmission.

However, unlike the i30 N which could be ordered with a six-speed manual from $46,200, the Kona N is an auto only proposition.

There’s also a Kona N Premium which brings extra goodies like a sunroof, rain sensing wipers, suede covered heated and ventilated front seats and heated steering wheel, amongst others for an extra $3,000.

Colour options include Atlas White, Ignite Flame (shown here) or Performance Blue all of which are solid finishes and comes as standard; or you can pay $595 for the Cyber Grey metallic or Dark Knight or Phantom Black mica finishes. A matte paint called Gravity Gold is also available for an extra $1,000.

The Kona N plays in a niche field with not many rivals except for the imminent Volkswagen T-Roc R which arrives soon from $59,300 plus on-road costs.

What features does the Kona N have? 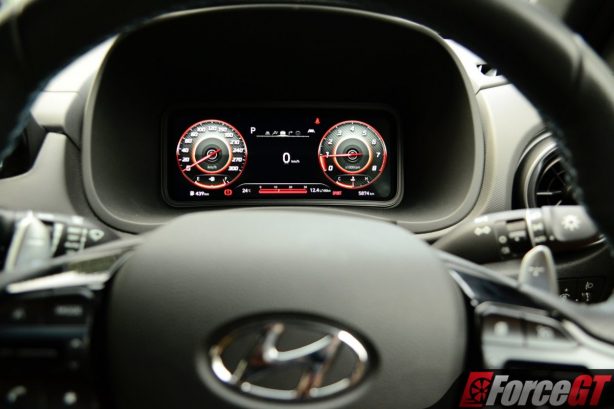 To justify the higher price tag compared to a regular Kona, the Kona N is stuffed full of fruits. While you still only get single- instead of dual-zone climate control, it comes with

How safe is the Hyundai Kona N? 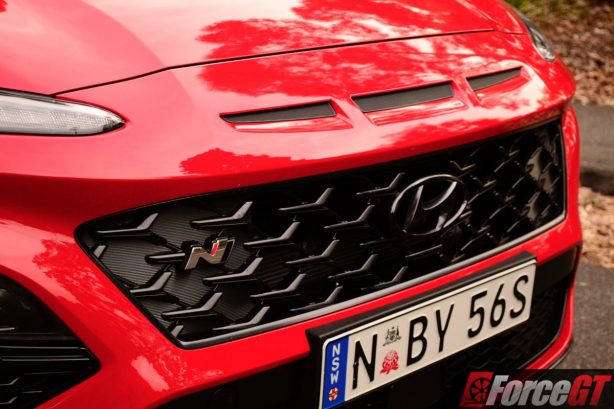 You could be forgiven for mistaking the Kona N for the Kona N Line as they both look rather similar at first glance.

Get close and you’ll notice the sinister blacked-out badge on the front grille, along with a 10mm longer front lip.

Moving to the sides, you get body colour wheel arches and 19-inch forged alloy wheels behind which hide a beefy set of stoppers measuring 360mm up front and 314 at the rear. There’s also N branded front callipers to remind you of the performance potential lurking underneath.

At the back, you get a pair of canon-sized exhaust pipes that pops and crackles, an aggressive roof-mounted spoiler and a massive rear diffuser all of which dials up the visual excitement from the get-go. 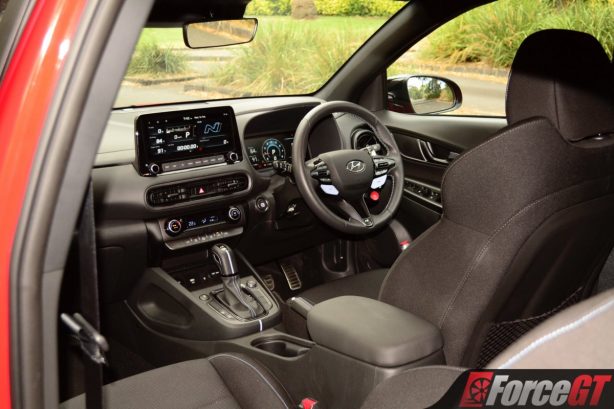 While you get N specific gear like the grippy sports bucket seats, pale blue ‘N’ buttons and the attention grabbing red ‘NGS’ (for N ‘Grin’ Shift) button, the interior is largely carried over from the regular Kona.

That means hard plastics and a slightly dated dashboard. The digital instrument clusters are also familiar from up-spec Kona variants, albeit with a unique N Performance view when one of the Performance Blue N buttons is depressed.

There’s the addition of a ‘N’ Performance app on the infotainment screen which adds everything from a boost gauge, G-force meter, lap-timer and track maps for some of the countries well-known circuits. 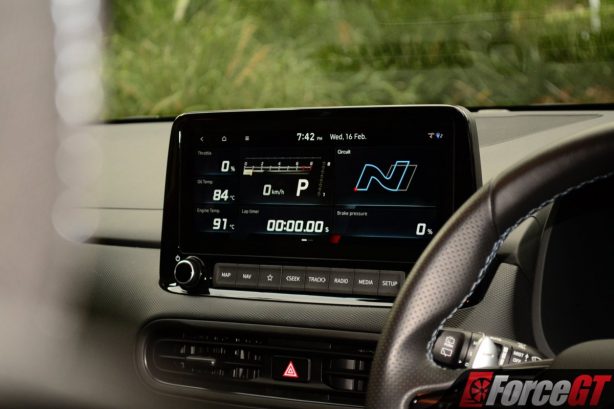 Blue is the N division’s signature colour and you’ll find highlights of it throughout the cabin, including on the steering wheel, shifter, and seats.

While it doesn’t feel cramp, the Kona N isn’t a big SUV, either. There’s enough room for most to feel comfortable, both front and rear, as long as they are not overly lengthy. However, compared to the i30 N on which it is based, there’s slightly less head and shoulder room.

Lift the manually operated tailgate and you’ll find 361-litres of boot space, or 1,143-litres with the rear seats folded, making it suitable for weekend runs to the hardware shop or supermarket. 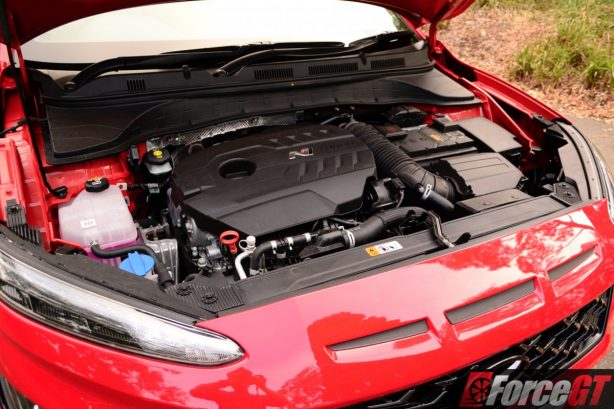 The Kona N is powered by the same 2.0-litre four-cylinder turbocharged petrol engine from the 2022 i30 N. That means it also benefits from the stronger block and bigger turbo, producing a solid 206kW and 392Nm.

Pressing the little red NSG button on the steering wheel unleashes an additional 7kW of power, albeit for only 20 seconds with a dashboard timer counting down after its activation.

Disappointingly, despite wearing an SUV sheet metal the Kona is front driven only, although an electronically-controlled mechanical limited-slip differential helps put power down rather effectively in most situations.

Eschewing all-wheel drive has enabled the Kona N to keep weight at bay, with the small SUV tipping the scale at 1,569kg, or just 28kg heavier than the i30N.

In terms of fuel consumption, our test average of 9.1L/100km was impressively close to the official claim of 9.0L/100, comprising of a mix of inner-city and freeway driving. 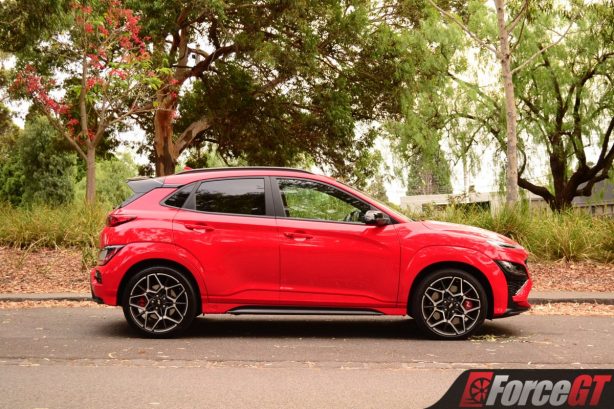 The initial disappointment with its front-wheel drive layout is quickly dismissed by the effectiveness of its electronically-controlled limited-slip differential and alert steering. Axle tramp is minimal in the dry and only really becomes an annoyance occasionally in the wet.

Changes of direction are quick and Hyundai has gone to great lengths to reinforce the chassis, countering the higher body roll inherent in SUVs for a more planted feel. The result is handling that is delightfully poised.

Thanks to the lighter front-wheel drive layout and shorter wheelbase, you would be forgiven for thinking you’re in a hot hatch until you realise you sit slightly higher than the car next to you at the lights.

We already know the 2.0-litre turbo four is a hoot from the i30 N and it’s similarly boisterous in the Kona N, especially when you hit the little red ‘NGS’ button which unleashes all sorts of theatrics from the tailpipe along with the above mentioned 7kW of extra oomph. 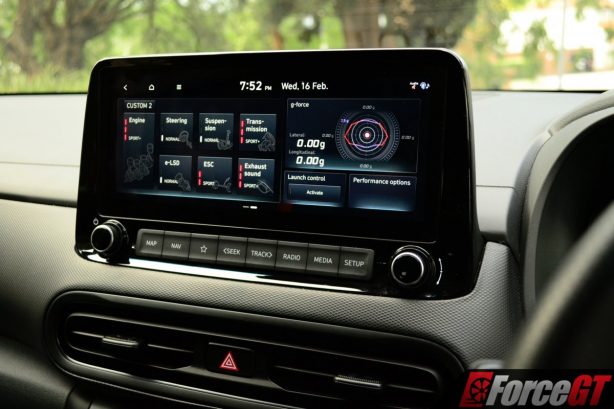 Like any self-respecting high-performance machines these days, you can tinker with the car’s engine, steering, suspension, transmission, electronic limited-slip differential and stability control settings to suit your style via the ‘N’ menu on the touchscreen, but the Kona N’s basics are all very good.

There isn’t a great difference in ride comfort between the settings and regardless of which suspension settings you choose, the Kona N’s ride is firm but never crashy, even on rippled tarmac.

However, most will gravitate towards the Sport+ mode for exhaust sound which gives a bassier note, along with pops and crackles on downshifts.

There’s good steering feel its weighting also increases with the sportier settings though it doesn’t necessarily get more communicative.

Like the regular Kona, wind and tyre noise are on the high side, especially over coarse-chip bitumen.

The Kona N comes with a five-year, unlimited kilometre warranty.

It requires a visit to the servicing department every 12 months or 10,000km, whichever comes first, with the first five services capped at $335 each – identical to the i30 N.

The Hyundai Kona N might be taller and heavier than the i30 N, but it delivers a very similar driving experience thanks to the shared drivetrain. It’s just as fun and engaging, although it’s slightly smaller inside and has less cargo space compared to the i30 N.

For those who can’t go without an SUV but still hankers for performance, the Kona N ticks the box.