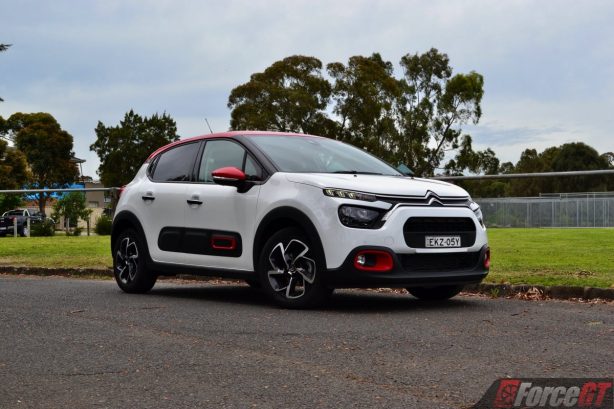 If you’re reading this review, chances are you’re keen to standout from the crowd and go a little left field. The city hatchback segment is getting a little too predictable these days. The main players are safe and easy options like the Toyota Yaris, Mazda 2 and Volkswagen Polo. The Citroen C3, however, is a much different proposition.

The current generation model has been around since 2017, but a mid-life refresh in 2021 gave the city runabout a new front fascia, a new set of running shoes and some rather eye-catching two-tone exterior colour themes. The interior has also been tweaked.

Along with the update, there’s been a $2,000 price hike, as well, bringing the single spec C3 Shine sticker to $28,990 before on-road costs. It’s dearer than equivalent Japanese competitors, but still undercutting its German rival. 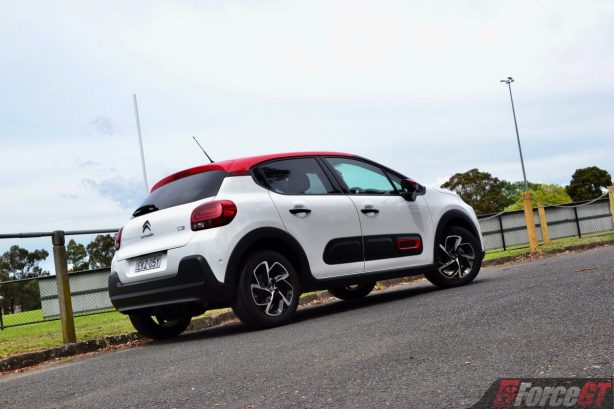 No review of a French car is complete without some words about the styling. Like sister company Peugeot, quirkiness is the order of the day for any car that wears the Citroen badge. The C3’s design has evolved much – in the right direction – since the oddball early 20s models. It’s now much easier on the eyes and ‘odd’ has been replaced with ‘fun’.

The C3 looks quintessentially French, meaning despite its pint size it will not go unnoticed on the road – this time around in a good way. 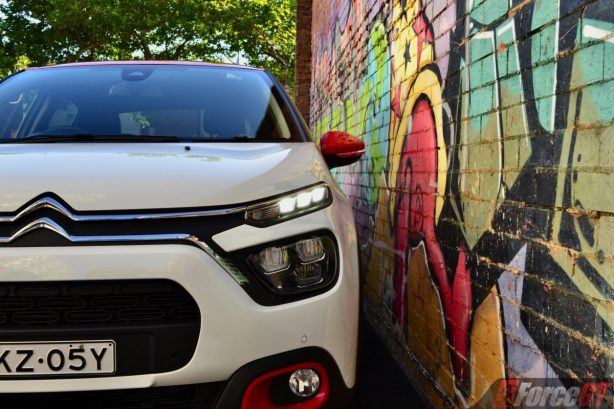 The interior of the C3 shows how a small cabin can still be made to look interesting. Generic or derivative design isn’t what you see here, instead the C3 plays around with rounded rectangle shapes which have been applied to objects like the air-con vents, steering wheel columns, instrumentation binnacles and door grab handles. Speaking of door grab handles, they are stylish items inspired by designer luggage handle.

Like the exterior, a contrasting colour accent strikes through the dashboard and also on the seats, lifting cabin ambiance. However, the colour is fixed to bluish teal regardless of the exterior colour, which looks a bit mismatched. It’d be nice if it was the same colour as the exterior accent. 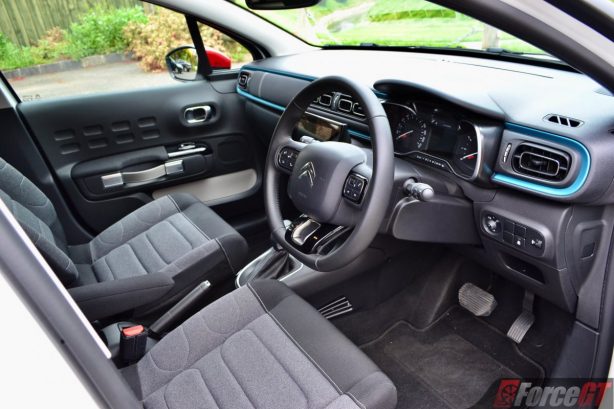 For a city car, cabin space isn’t as tight as we’d thought. The front row of seats have generous headroom and legroom, while the rear is spacious enough to comfortably accommodate two average-sized adults. All seats are flat and wide, with bolsters on the sides for support. They offer good comfort levels akin to those in bigger cars.

The lack of a lidded centre storage compartment aside, usable storage spaces are plenty around the cabin. The door pockets are thick, the glovebox is large and a total of four cup holders (two in front and two in the back) can be found, though the front ones are quite small.

The boot space measures 300 litres with the rear seats up, and with them folded the space expands to 922 litres. Both capacities are larger than those in the Toyota Yaris and Mazda2, dwarfed only by the Volkswagen Polo. 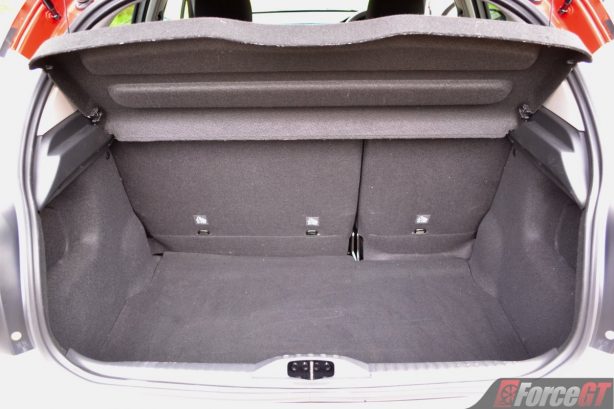 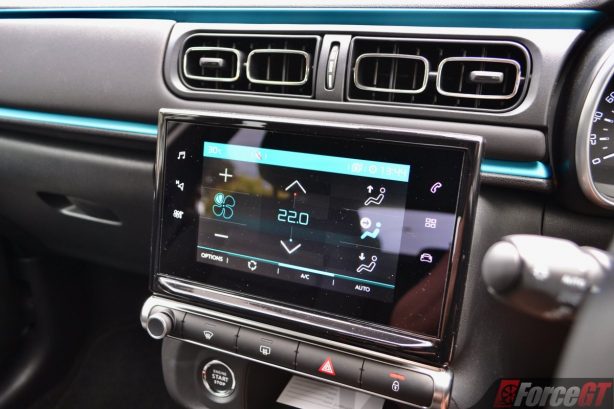 The 7-inch infotainment touchscreen dispenses high clarity graphics and the interface is intuitive and very responsive to the touch. The built-in satellite navigation also works well, so does Bluetooth pairing.

However, the climate control functions are embedded into the touchscreen. Though there’s a shortcut button next to the screen that navigates directly to the climate control page, you’ll still need to takes your eyes off the road to adjust the settings on the screen. The good old rotary knob is always preferred. Thankfully though, a knob is fitted below the touchscreen to operate the radio/volume. 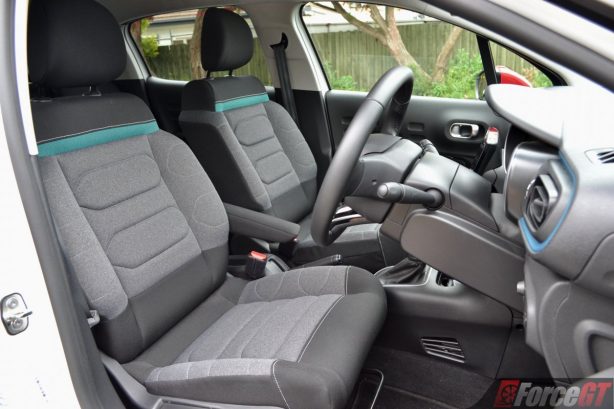 Cruise control is also fitted, but the control stalk is located in the most impractical location you could find – behind the steering wheel and completely out of sight. 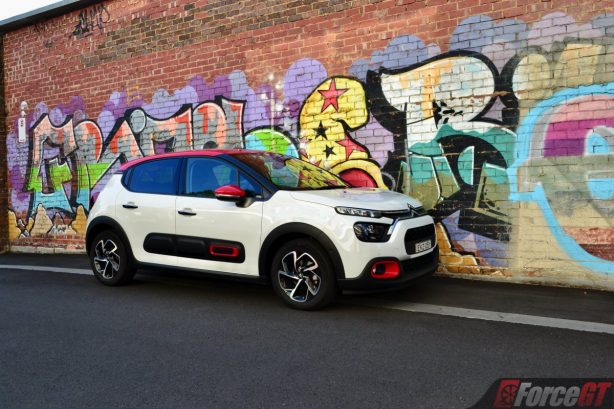 The C3 is exclusively powered by a 1.2-litre three-cylinder turbocharged petrol engine developing 81kW @ 5500rpm and 205Nm @ 1500rpm. Three potters are never the most refined of engines and the trait is evident also in the C3. There’s that layer of gruffness that you’d need to be accustomed to. But once that’s behind you, the little 1.2L turbo will be appreciated for its responsiveness and poke.

Be it ploughing through the daily grind or blasting through some city back roads, the engine is always willing, thanks in most part to peak torque arriving low in the rev range. The 6-speed auto is also quick shifting, adding to drivetrain efficiency. As a daily city car, the C3 has more than enough punch to get around. The 0-100km/h sprint is rated at 10.9 seconds, while claimed top speed is 188km/h. 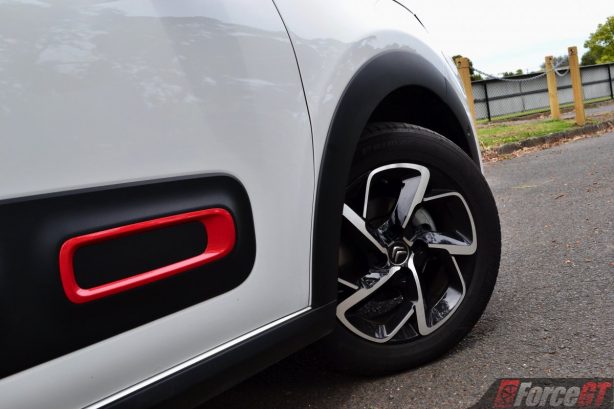 Usually, small cars don’t ride as smoothly as bigger cars. Not the case of the C3. The ride is easily the most compliant in the segment, thanks to a soft suspension set up that soaks up bumps and ruts with aplomb. This is the most comfortable city car we’ve rode in for quite a while. And if you’re not already aware, Citroen has long been known for their cushy ride.

The softer set up does mean that the C3 roll around corners a little more than sportier rivals, but nothing too unmanageable. The steering is light and easy, making the C3 quite a joy to chuck around town. 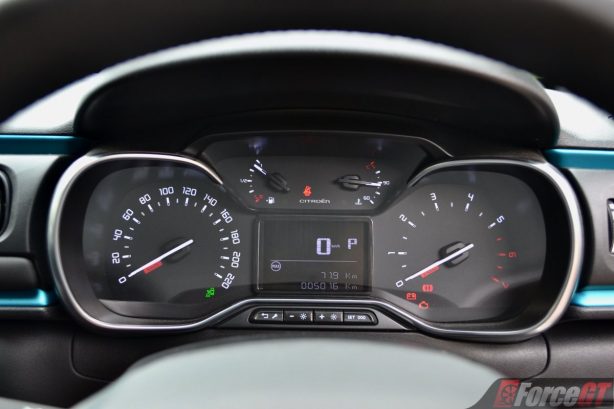 Small capacity turbo engines are incredibly fuel efficient, and the C3 is no exception. With mostly city driving and the occasional heavy footed spurt, the little hatchback averaged 7.7L/100km at the end of our week-long test. This is against the rated combined average of 5.2L/100km. It runs on the more expensive premium unleaded fuel though.

The C3 is covered by a 5-year factory warranty with no cap on kilometres. A 5-year complimentary roadside assist is included as well. It requires a service every 12 months or 15,000km, whichever comes first.

The Citroen C3’s unique character and chic design make it one of the more interesting city cars in the segment. Combined with good space, a solid powertrain and comfortable ride, there’s quite a lot to like. The only real sticking point is perhaps its high price.