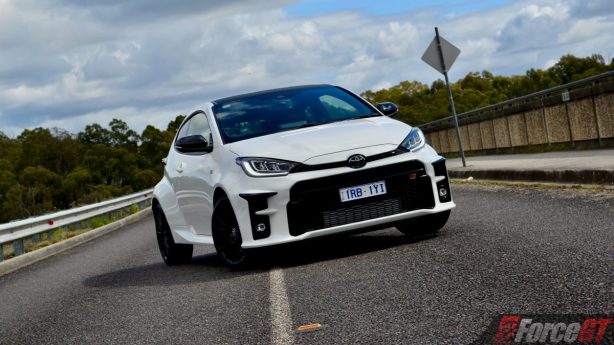 The current Toyota GR Supra is essentially a BMW Z4 underneath, while the first-generation and the current second-generation Toyota 86 models were developed in partnership with Subaru. This means the last time Toyota built a sports car from scratch was in the late 90s with the Celica GT-FOUR.

For more than a decade since the turn of the millennium, the Japanese auto giant had mostly been building vanilla transportation for the masses. The GR Supra and 86 have helped shed that librarian image a bit, but Toyota knows it needs something far more original. In its most aggressive brand shake up since the 90s, Toyota goes full fat with the GR Yaris.

Yep, who would have thought the humble Yaris would be slapped with the Gazoo Racing badge? Make no mistake though, this is not your ordinary, shopping trolley, car-next-door Yaris. The GR badge means business. 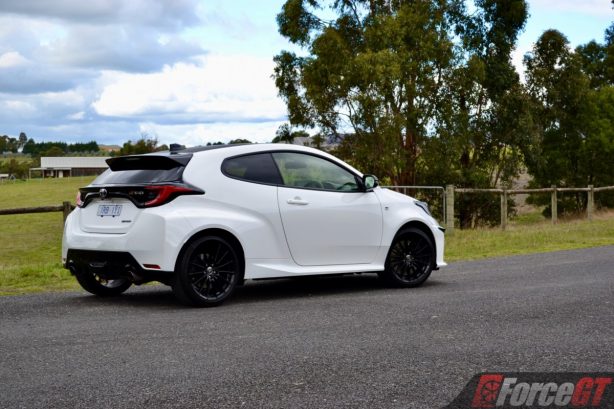 Those were the words from Akio Toyoda, the boss of Toyota Motor Corp. at the unveiling of the GR Yaris last year, and it shows how serious Toyota was with the GR Yaris.

Essentially, the GR Yaris is a WRC (World Rally Championship) machine adapted for road use. With three consecutive WRC titles under its belt, the Toyota Yaris WRC is an absolute powerhouse in its game. How much of that has been transferred to its road-going version? Let’s dissect the GR Yaris. 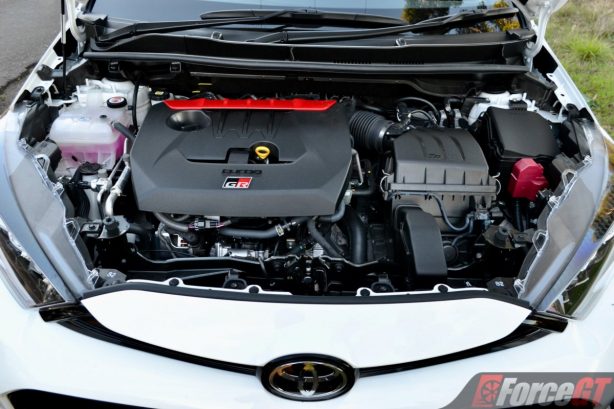 The beating heart of the hot hatch is a turbocharged 1.6-litre three-cylinder engine that churns out an incredible 200kW of power and 370Nm of torque. It’s the world’s most powerful three-cylinder, as well as 1.6-litre engine.

It’s mated exclusively to a six-speed manual transmission, which shuffles power to all four wheels via a Toyota GR-Four permanent all-wheel-drive system. With an impressive power-to-weight ratio of 156kW per tonne, the sprint from 0 to 100 km/h takes just 5.2 seconds.

The makes the GR Yaris the most powerful and fastest car in the small performance hatch segment. It comes at a price though. At $49,500 plus on-road costs, the supermini hot hatch is playing in a segment one size up pricewise, competing with the likes of Hyundai i30 N, Volkswagen Golf GTI and Ford Focus ST.

But Toyota will be quick to justify that the GR Yaris is a different proposition altogether. The lightweight, compact turbo engine adopts motorsport technologies including multi oil-jet piston cooling, resin coating for the piston skirt, machined intake ports and a combination of direct and port fuel-injection.

The single scroll turbocharger employs ball bearings to reduce friction, while a large crossflow intercooler, an aluminium oil cooler and a large-capacity water pump ensure the engine stays cool even after a full day of hot laps at the track. 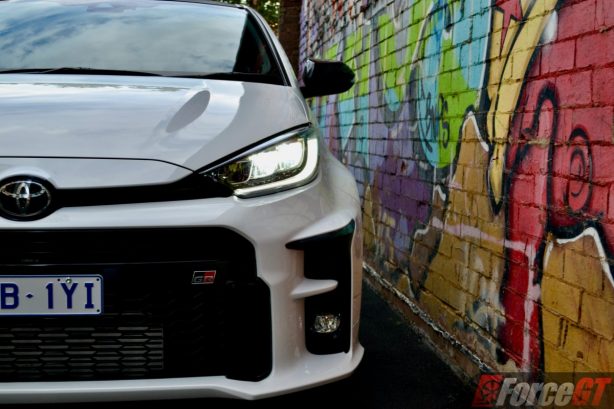 The boffins at Toyota have even gone to such great lengths as moving the battery from the engine bay to under the rear boot floor to make space for a large 10.8-litre air intake cleaner with a compound filter, contributing to low pressure losses.

They have also used aluminium tape on the intake system upstream of the airflow meter, producing the perfect air stream for a more linear throttle response regardless of longitudinal G-forces.

Even the 50-litre fuel tank has been designed with motorsport intent. It features a 2.1-litre sub-tank to ensure consistent fuel delivery, even with the fuel-warning light illuminated and under high lateral forces during hard cornering.

All these are packaged in a GR Yaris specific wide body kit with aggressive front and rear bumpers, broad sculpted fenders, a large roof-mounted rear spoiler and a pair of dual exhaust pipes.

Lightweight carbon fibre polymer is used on the roof, with further weight trimming from the aluminium bonnet, doors, tailgate and multi-link rear suspension. All in all, it weighs just 1280kg at the kerb despite its all-wheel drive underpinnings. 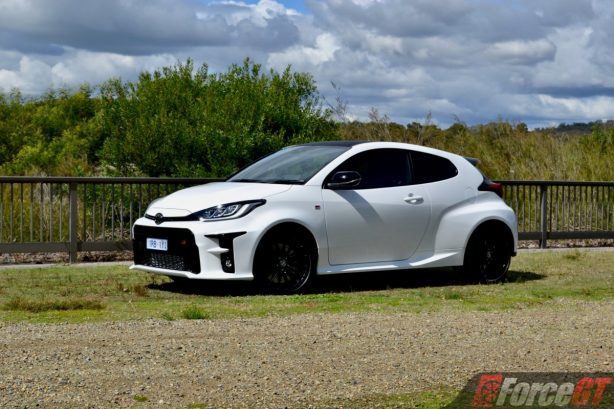 Unlike the exuberant exterior though, the 2+2 interior has not much to shout about. The mostly dark and solemn interior is highlighted by a heated leather-wrapped three-spoke steering wheel with GR badging, a short-throw gear stick and blistered aluminium pedals that are positioned well to support heel and toe driving.

Being a hatch, the driving position is not as low and engaging as what you’d find in a low-slung sports coupe. Still, those heated sports front seats with large bolters provide amble support during hard driving, yet comfortable enough for long drives. A myriad of seat and steering adjustments mean finding the right driving position is no fuss.

The rear seats don’t afford a lot of headroom, and so are best left to young children. There’re also no handles back there so those unlucky rear passengers must prepare to be thrown around during sporty driving! 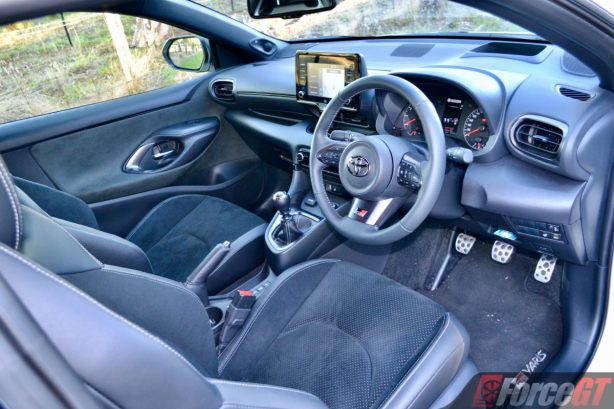 For its price, Toyota did throw in a lot of kit, including keyless entry, climate control air-conditioning, Apple CarPlay and Android Auto, head-up display (HUD) and a punchy eight-speaker JBL sound system.

But enough of the nitty gritty. How does it drive? There’s only one way to put it. This is the best Toyota sports car since the A80 Supra.

Let’s first start off with the engine. The blown three-pot is an absolute cracker, with minimal lag and sharp response for a turbo engine. There’s seemingly endless wave of midrange torque, with all 370Nm of it available at your disposal from 3,000rpm through to 4,600rpm. The torque may peak at a higher rpm than other performance turbo engines, but the build up towards that peak is strong and so it pulls hard right from the get-go.

There’s quite a soundtrack to it, too. The solid, bassy and slightly metallic tone sounds enthusiastic without being overdone. 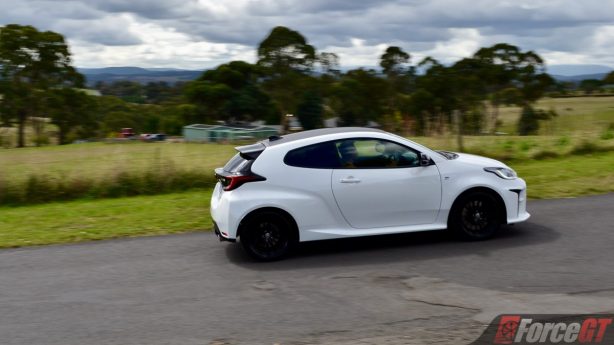 All-wheel drive means traction is no issue, even during hard launches. Speaking of AWD, the GR-Four system is able to split torque up to 100 per cent to either axle. Managed by an electronically controlled multiplate clutch, the AWD system features three drive modes. In Normal mode, 40 per cent of available torque is channeled to the rear wheels, in Track 50 per cent, and in Sport 70 per cent.

That said, the torque split is continuously adjusted based on driver inputs and road conditions. And this is how the GR Yaris is able to maintain astounding grip level in all settings. Tuck its nose into a hairpin and the hot hatch obeys with no complains. A chicane wouldn’t even ruffle its feathers. Heck, high speed corners are a walk in the park in this thing. 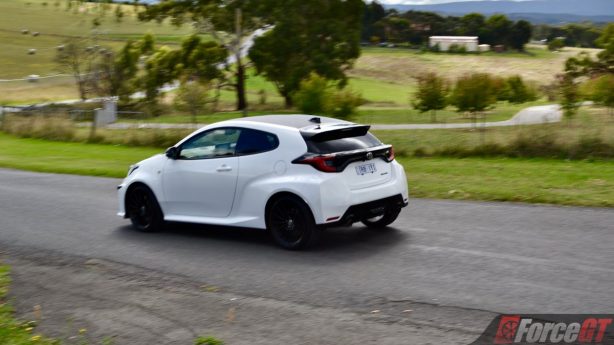 The gutsy engine and sophisticated AWD combo are what makes the GR Yaris an absolute blast to belt around both on track and road. There’s never a dull moment behind the wheel, even when you’re not prodding it, thanks in large part to the driving finesse built into the GR Yaris. We’re talking the sharp, precise and communicative steering wheel, the powerful and progressive brakes, and the slick and snappy manual gearbox.

The way how all these individual parts work and fuse so harmoniously and brilliantly together is a testament to Toyota’s performance and motorsport expertise. And it proves one point – Toyota can still make a world-beating performance car, if it wants to. 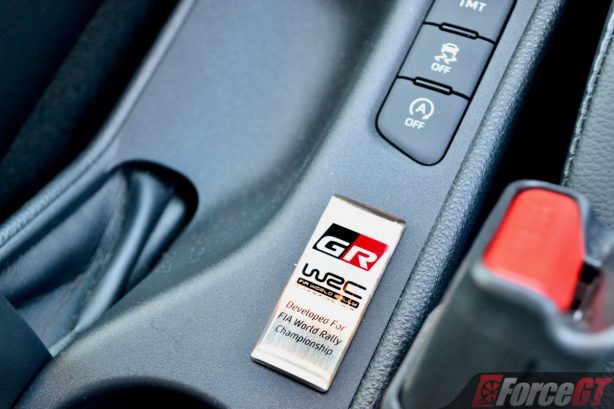 As hardcore of a sports car as it is, the GR Yaris is surprisingly comfortable around town. The fixed, non-variable suspension is firm yet compliant enough to soak up road imperfections with aplomb. This is a car that you can use daily, no doubt about that.

With a rated average fuel economy of 7.6L/100km (tested real-world average of 8.6L/100km), the GR Yaris is also one of the most economical sports car you can buy. Longer term, it’s covered by a five-year factory warranty and capped-price servicing for the first six services within a 6-month/10,000km interval at $260 each.

Once in a while, Toyota releases something truly special, truly phenomenal. The 2000GT of the late 60s was one such example, followed more recently by the LFA supercar through Toyota’s luxury arm Lexus.

Would we place the GR Yaris in the same league as those much more expensive, limited run models? Absolutely.

The GR Yaris embodies everything that Toyota has learnt and gained in world rally racing. When the WRC machine has enjoyed such great success on the gravel, you can only expect good things from its road legal version. And true enough, that’s exactly what Toyota has given us – a well-engineered, lightweight and gutsy hot hatch with motorsport at its core that begs to be driven.

This is one sports car that is going to be hard to topped, for sure.

Previous Toyota LandCruiser 300 Series pricing and specification
Next Is this the next-generation Honda Integra?