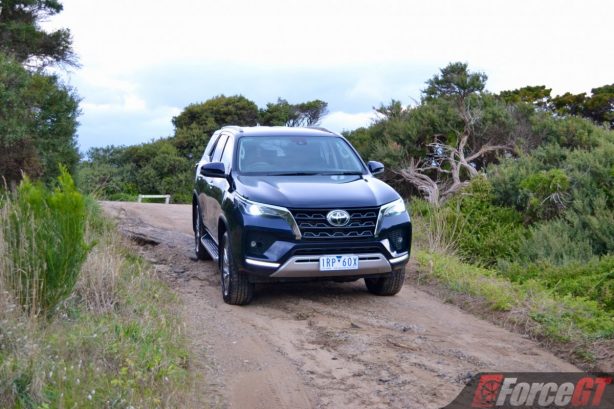 With the popularity of utes as lifestyle vehicles, the ute-based SUV segment serves to build on that appeal with greater comfort and practicality. While Toyota’s HiLux ute has long been the undisputed best-seller in Australia, its SUV cousin, the Toyota Fortuner, hasn’t been as quite a hit.

Returning to Australian shore in 2016 as a bridging model between the larger, heavier duty Toyota Land Cruiser Prado and the softer Toyota Kluger, the Fortuner brought with it the HiLux’s rugged four-wheel drive underpinnings and off-road gears wrapped in a seven-seat SUV body with improved comfort levels.

As an off-road capable SUV, there wasn’t much to complain about the Fortuner, but it’s somehow shadowed by the more popular HiLux and Prado in Toyota’s SUV line-up, as well as strong competition from rivals Mitsubishi Pajero Sport and Isuzu MU-X. So, to improve the Fortuner’s fortune, Toyota has given it a mid-life refresh. 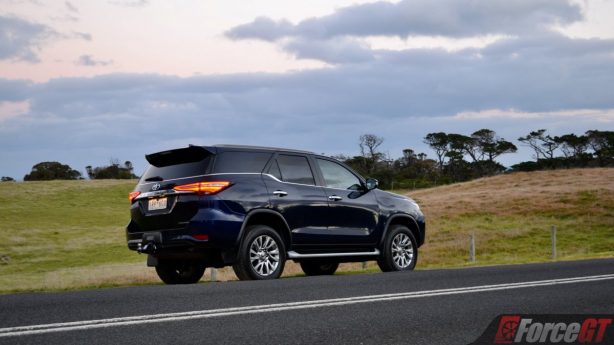 Essentially, the 2021 Fortuner’s latest advances benefit from similar updates that have also been applied to the updated 2021 HiLux.

Headlining the update is the upgraded 2.8-litre turbo diesel engine that produces 150kW and 500Nm, an increase of 20kW and 50Nm from before thanks to a larger ball-bearing turbocharger and improved engine cooling. The higher output is channelled to the road through a six-speed automatic transmission and selectable four-wheel drive system with low range gearing – all unchanged from before.

Despite the hike in power and torque, rated fuel economy has improved to 7.6L/100km on the combined average, a significant drop from the previous 8.6L/100km, mainly from efficiency gains on the urban cycle at 9.1L/100km compared to 11.0L/100km from before.

The beefier engine is good news for towers, with maximum braked towing capacity expanded by 300kg to 3100kg, on par with the Mitsubishi Pajero Sport and Ford Everest, though still lacking the muscly Isuzu MU-X (3500kg). 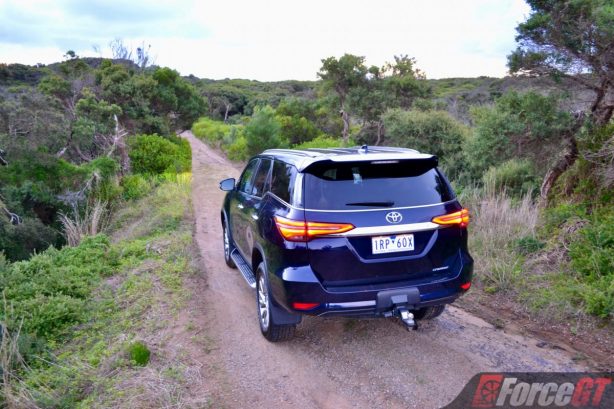 Improving on-road manners is the variably assisted power steering that is designed to be lighter at parking speeds and heftier and more direct at highway speeds.

Elsewhere, the addition of front parking sensors on top of the existing rear sensors is sure to make parking this large SUV a whole lot easier.

The Fortuner may share a similar chassis as the HiLux, but its utilitarian underpinnings are well hidden with the rugged yet suitably sculpted SUV body shell. Off-roading is still the design focus though, with it offering excellent approach and departure angles (29 and 25 degrees respectively) thanks to short front and rear overhangs. The short wheelbase is also designed to give a good breakover angle of 23.5 degrees. Other notable off-roading specs include a wading depth of 700mm and ground clearance of 213mm. 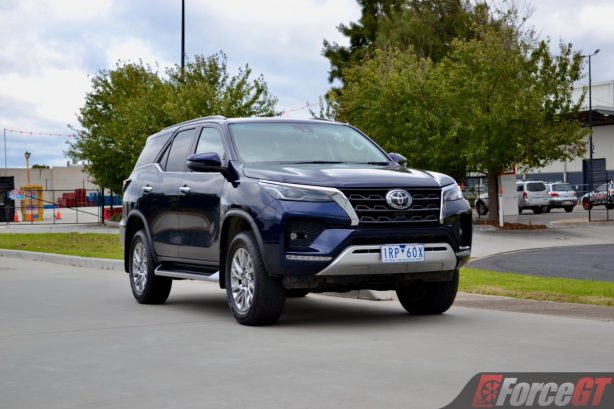 The already resolved SUV appearance has been mildly enhanced for 2021. The revised front fascia features a larger black grille and a restyled front bumper that now incorporates a skid plate for a tougher look and improved off-road underbody protection.

Across the grades, the headlights and taillights have been redesigned, while the 18-inch wheels on the Crusade model gained a new style flanged-spoke design. The GX and GXL variants retain their existing 17-inch alloy wheels.

Like the exterior, changes to the interior are minimal. The chunky dashboard is slightly less utilitarian than that in the HiLux, with soft, synthetic leather material used on the instrumentation cluster binnacle, centre stack and top glove box cover. In the top spec Crusade grade tested here, the premium-look material spills over to the steering wheel and door cards, while piano black trim pieces are applied generously on the centre console and door switch surround.

Despite the plusher additions, the cabin is still very much built with durability in mind and everything – from the knobs and buttons to the levers and stalks – feels like they’ll last a very long time. All panels and trim pieces are tightly put together, too, with nothing squeaking or moving around. 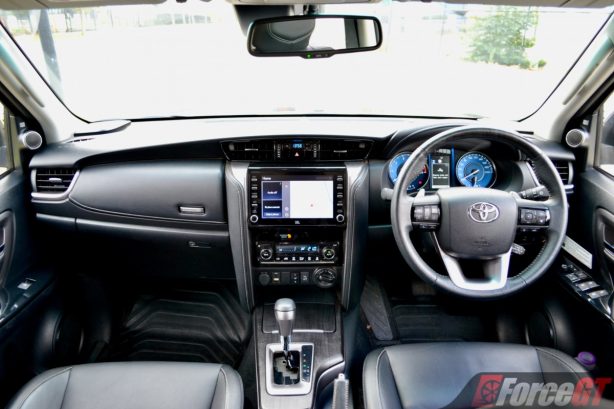 Disappointingly, Blind Spot Monitoring and Alert still isn’t available on the range-topping Crusade model with this update, while many rivals already come fitted with the essential safety feature in their upper spec variants. Another notable omission for the Crusade is a sunroof. 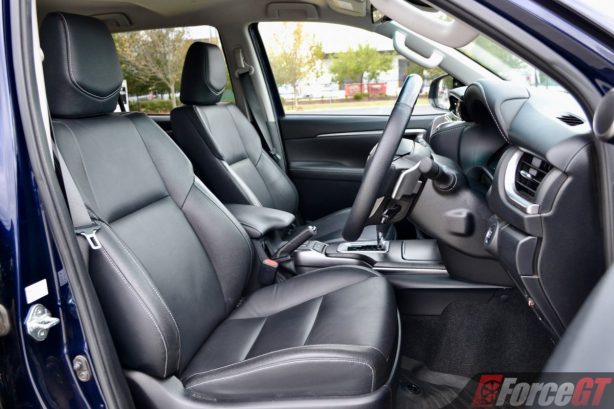 All Fortuner variants have seating for seven over three rows. The two front rows offer generous amount of headroom, while legroom is decent for the average height adult. The second row seating is split 60/40 and can slide forward and aft to make more room for the third row, which at best, is still a bit of a squeeze for adults.

Both second and third row seats can be stowed to provide extra luggage space. The second row seats tilt and tumble forward individually while the two halves of the third row are stowed to the sidewalls of the cargo area. The third row seats, even when folded, are still bulky, but otherwise the space liberated is flat and square. 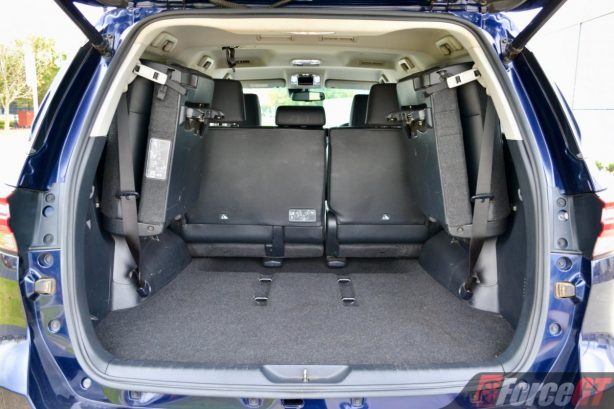 Storage compartments are deep and many around the cabin, with the one below the centre armrest large enough for a medium water bottle. An air-conditioned cool box above the glovebox can be used to cool or warm items with the capacity for two 600ml bottles.

The updated 2.8-litre turbo diesel engine not only makes more power, it’s also more refined. While there’s no hiding the oil burner’s clatter in the cabin, it’s now much more muted, and on cruise there’s hardly any noise from it.

The added power yields improvement in all aspects. The throttle is livelier and the pull from standstill is gutsier. Around town, the extra torque spread across a wider rev range of 1600-2800rpm makes for a more effortless drive. 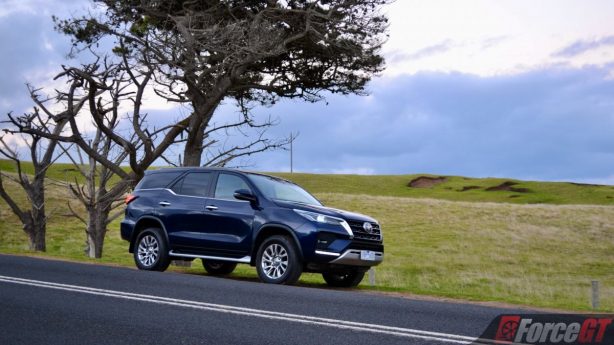 The six-speed auto pairs well with the updated engine, where it operates discretely in the background picking out the right gear most of the time. Those who prefer the manual transmission can take advantage of the iMT (intelligent manual transmission) feature, where it automatically blips the throttle to match engine speeds to the gearbox on downshifts.

The hydraulically assisted steering, despite the improvement in this round of update, is still hefty at low speeds, even in 4×4 standard.

The all-coil suspension – double-wishbone at the front and five-link coil-spring at the rear – is unchanged for 2021 and continues to perform well both on and off road. The ride on road is smooth, while off road isn’t too bad either.

Speaking of off road, the Fortuner’s HiLux derived four-wheel drive system will go deep into the bush. With good wheel articulation, all wheels remain grounded for optimum traction even in the trickiest situation. There’s also a rear differential lock to help with proceedings.

The Fortuner is covered by a factory warranty of 5 years and unlimited kilometre, which is fairly standard these days.

It has a short servicing interval however, requiring a visit to the dealer every 10,000km or no longer than 6 months, whichever comes first. Servicing is now covered by Toyota Service Advantage capped price servicing at $240 per service for the first 6 services or 60,000km, whichever occurs first.

If you’re after an SUV with space for seven people and their luggage, that rides decently on road yet tough enough to tackle the roughest of terrain, the Toyota Fortuner would fit the brief well.

But look around the market and you’ll find that the plusher and more capable Toyota LandCruiser Prado doesn’t cost a great deal more than the Fortuner, while the just as likeable Mitsubishi Pajero Sport is a good chunk less expensive.