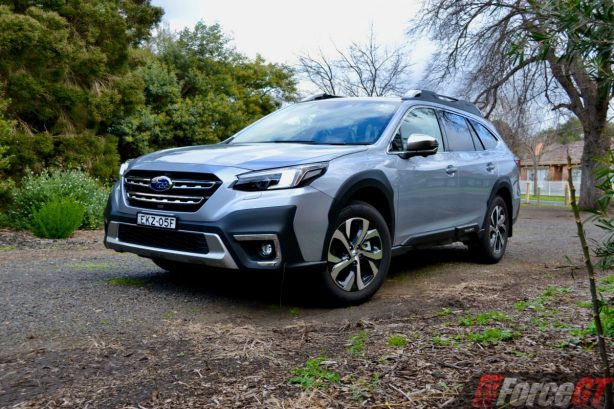 The Subaru Outback has some of the most loyal owners in Australia, with over one-third of its owners returning to buy an Outback when a new model comes out. Subaru’s strong brand reputation Down Under plays a role, but surely there’s something about the Outback that’s keeping owners hooked, generation after generation.

And what’s a better time to explore the Outback formula than at the release of the all-new sixth generation model?

The Outback may be marketed as an SUV, but it’s really a cross between a station wagon and a conventional SUV. The station wagon body is derived from the Liberty mid-size sedan, which has just been recently dropped from Subaru’s Australian line-up. The wagon body is then raised and beefed up with all the SUV bits. 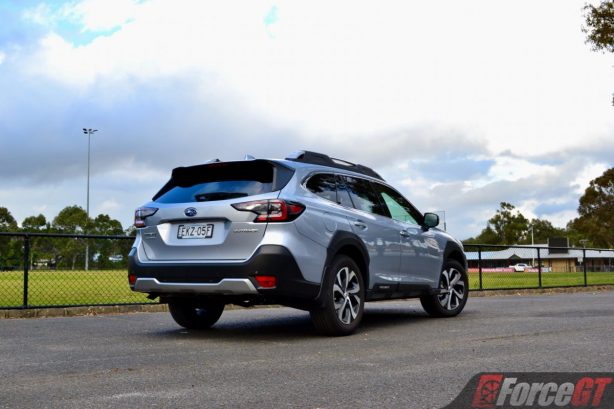 The end product is one that combines the handling characteristics of a sedan, the generous space of a wagon, and the versatility of an SUV. Sounds like a great combo for us who live, work and play in a country as vast and diverse as Australia.

Its only true rival is the Volkswagen Passat Alltrack, which in its least expensive form, still commands $7,000 more than the Outback. From a wider perspective, the Outback does somewhat rival the likes of Hyundai Santa Fe, Kia Sorento and Toyota Kluger, all of which priced higher at around the mid-$40k mark (excluding on-roads), though they do offer seven seats while the Outback is a five-seater only.

This makes the Outback quite an attractive proposition, price wise, if five seats are all you need.

The new styling hasn’t changed drastically from the old and it’s still instantly recognisable as an Outback. The wagon body now gets more defined lines, edgier headlight and taillamp designs and even greater emphasis on its off-road prowess with increased lower bumper and wheel arch cladding. 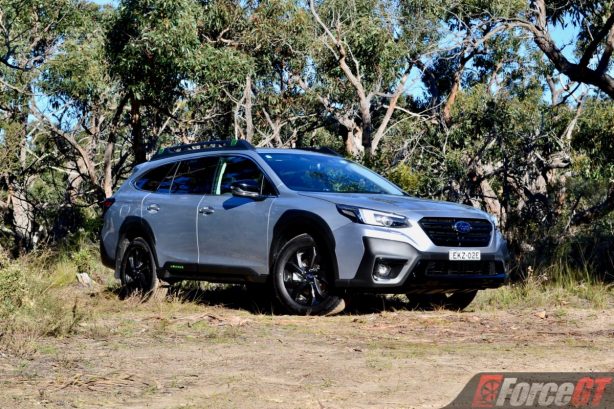 The range gets full LED lighting and 18-inch wheels as standard. The athletically themed Outback Sport receives dark accenting all around including wheels, grille and side mirrors finished in dark metallic. It’s contrasted by green side badge lettering and roof rail accents.

Overall, the new Outback looks sharper and more adventurous than before, though those who are not fans of jacked up wagon may find the design a bit of an acquired taste.

Most of the advancement on the new model is centred in the interior. Not that the previous interior is bad, but this new one is a major step up from before, both in terms of design and function.

If you’ve just stepped out of the old car and into this new one, you’ll notice just how much more premium the new cabin is. Subaru has certainly elevated the Outback’s standing in the mainstream market with this new cabin. 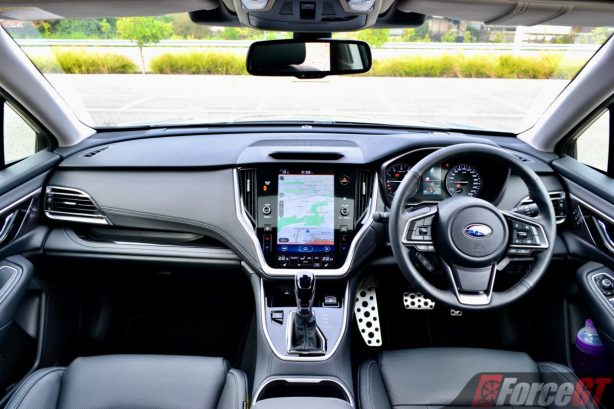 Immediately obvious is the new 11.6-inch infotainment touchscreen, which is one of the largest in the segment. It’s portrait orientation allows it to sit perfectly within the confines of the centre console, sandwiched neatly on either side by columns of buttons and knobs for important functions such as volume control and ambient temperature adjustment. It’s a very well thought-out design, with excellent ergonomics.

The touchscreen itself is just as equally user-friendly, with an intuitive menu structure and large on-screen buttons that are still easy to operate while on the move. The screen layout is great, with scrollable driving info at the top, main menu, media or map view in the centre, and detailed climate controls at the bottom. Screen resolution and clarity is high, too.

Yet, there’s room for improvement. The screen supports smartphone-like swipe and pinch gesture, but it isn’t as responsive and smooth as some rival systems. 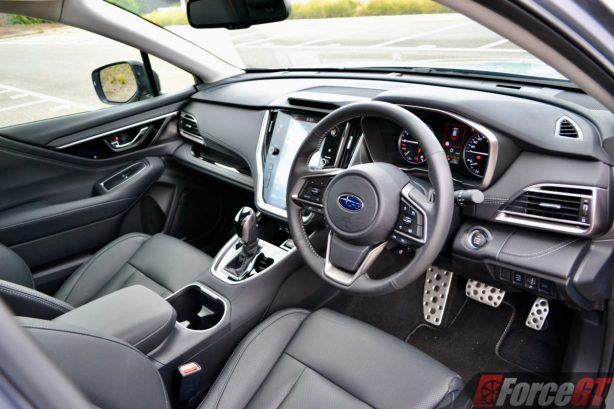 The infotainment features DAB+ digital radio, Bluetooth hands-free mobile phone pairing and streaming and supports Apple CarPlay and Android Auto connectivity. Built-in satellite navigation is included in all but the base model, while the top-spec Touring variant even gets a CD player – a rarity these days.

The audio quality through the standard 6-speaker sound system in the base and Sport models is already pretty good, but the 9-speaker Harman Kardon surround sound with subwoofer and amplifier in the Touring is simply superb, with super high clarity and powerful bass. 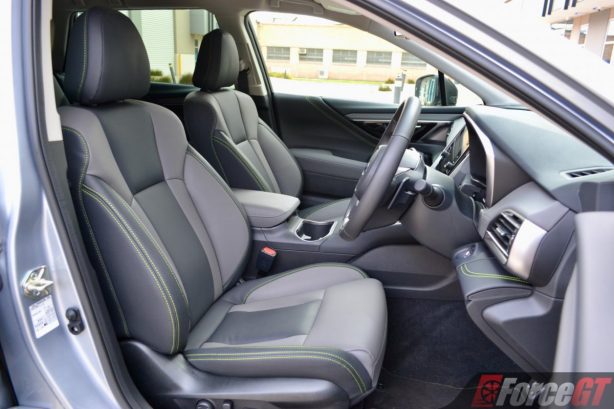 The Outback has always scored highly in practicality, and the new model is no exception. Storage compartments – in varying sizes but all usable – are littered around the cabin. Ahead of the gear shifter is a small storage tray for your mobile phone, while below the front centre armrest is a decently sized storage bin. Below the dashboard on the passenger side is long, flat tray for storing all the odds and bobs, with more storage available in the glovebox underneath.

Cup holders can be found in the front centre console and behind the rear seat drop-down armrest, while all doors have good size bottle holders.

The Outback may not look as big and bulky as its conventional SUV rivals, but it’s certainly not short on interior space. In fact, the Outback is even more spacious in certain areas, thanks to clever packaging. Occupants seated in the front and at the back all enjoy generous head and legroom, with the space in the rear so vast that it rivals even some of the largest SUVs out there. Despite being all-wheel drive, the drive shaft hump at the base of the centre rear seat is low and doesn’t really impede on legroom. 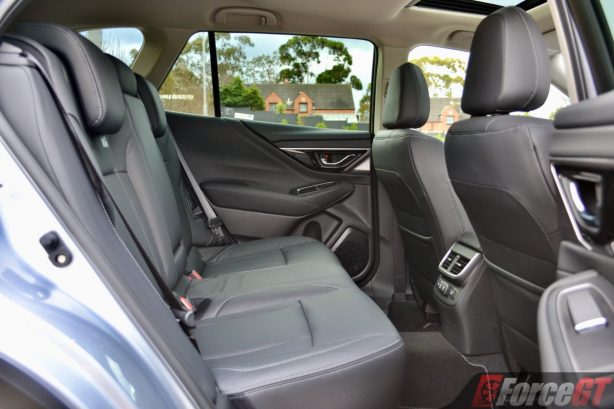 The seats are large yet so supportive. They’re also some of the most comfortable in the business, with the rear seats slightly reclinable, making them great for long trips.

The outboard rear seats are equipped with ISOFIX child-seat anchor, along with three top-tether anchors on the seat backs.

The base mode gets full cloth seats, while those in the Sport are wrapped in a water repellent material that actually works and clean easily. Top-spec Touring gets full Nappa leather seats.

With 522 litres of space, the Outback’s flat and square boot again rivals SUVs much larger in size. Tumble the 40:60 split folding rear seats and the space expands to 1,267 litres. A 12V power outlet is fitted to the boot (to the joy of campers) and a full-size spare tyre is tucked underneath the boot floor.

Power is sent to all corners via a CVT automatic with 8 ‘virtual’ ratios and Subaru’s renowned symmetrical all-wheel drive that is permanent and constantly variable.

On (and off) the road

The new 2.5L engine is a quiet operator, operating discretely in the background without bringing much attention to itself.

The same can be said for the CVT, which, quite unlike other CVTs, rarely flares the revs and is smooth and non-intrusive. Subaru should be commended for making the CVT’s virtual ratios work like a conventional torque converter auto with quick response to kickdown, but most of the time and especially on cruise the CVT hustles along with minimal fuss while keeping the engine barely idling to safe fuel. 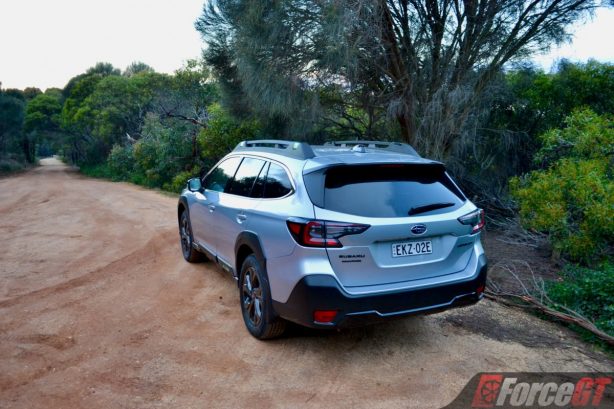 There’s certainly enough grunt to cope with the daily grind. It gets up to speed swiftly, too, partly thanks to the CVT keeping the engine spinning at its optimum power band. There’s good urgency in overtaking as well, while highway cruising is effortless for the most part.

Having a lower centre of gravity than high-riding SUVs does help in handling, with the Outback taking corners with excellent composure and grip. Ride comfort is right up there, as well, with bumps and ruts soaked up nicely for a very compliant ride. 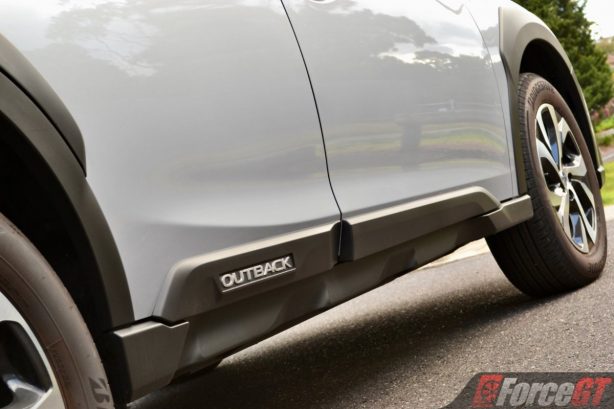 Out of town, the Outback is not afraid to kick up some dirt, with Subaru’s X-Mode traction tune offering selectable off-road modes for mud, sand and snow. With a ground clearance of 213mm and a very dependable all-wheel drive system, this thing is better at light off-roading than many conventional SUVs, faltering only on very slippery surfaces or overly rugged terrain.

A 5-star ANCAP safety rating and comprehensive list of safety feature drive home that this is a family-oriented package. 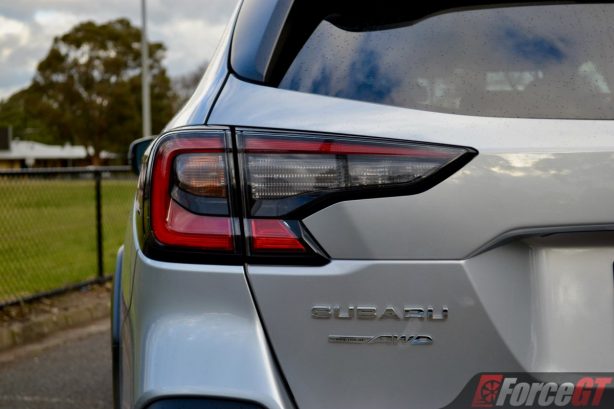 The Touring model features Driver Monitoring System, which can detect drowsiness and distraction through facial recognition and sound an alert. While it proves to be an important safety feature capable of preventing accidents, some may find it too sensitive in the sense that it doesn’t tolerate behaviours like looking in the rear-view mirror multiple times in quick succession. If anything though, it surely focuses the driver’s attention to the road ahead.

The lack of head-up display (HUD) in the top-spec Touring model is a surprise, given it’s now included in many equivalent rivals.

The Outback is fairly economical on fuel use considering the task at hand involves moving 1,661kg of car around. Our real-world fuel economy figure averaged out to 8.5L/100km which isn’t far off from the rated 7.3L/100km factory figure, and is thriftier than many petrol-powered SUVs.

Helping fuel economy is the idle stop start system, which has been refined to minimise jerkiness at restart.

The Outback is covered by Subaru’s standard five-year warranty with no limit on kilometre, while servicing intervals are scheduled for 12 months or 12,500km, whichever comes first.

The Subaru Outback remains one of the most sensible choices for a safe, well-engineered and practical family hauler. With admirable on-road performance backed by genuine light off-road ability, the new Outback brings versatility and an all-rounded appeal that are hard to match in the segment. It’s no wonder owners continue to be loyal to it.