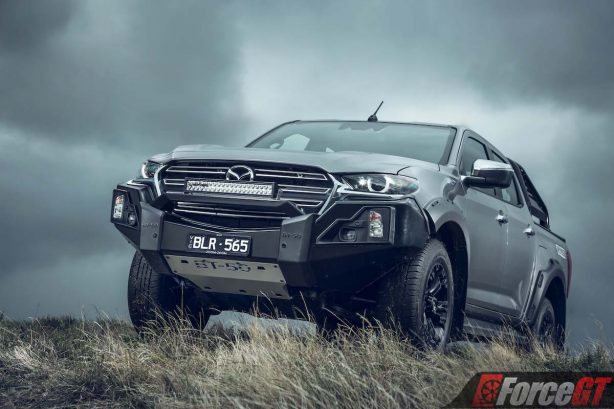 The last-generation Mazda BT-50 was often overlooked compared to its peers, especially the ever-popular Ford Ranger on which it is based. While Ford made continuous improvements to its star, Mazda sadly hasn’t been as diligent. The result is a dual-cab ute that feels its age and lacks behind the competition.

Happily, that is set to change with the 2021 BT-50. Based on the highly rated (read our review here) Isuzu D-Max but with Mazda’s unique design, the BT-50 takes a giant leap forward into modernity with an all new design and up-to-date technology.

Not surprisingly, top-end utes are big business these days and sell in high numbers due to their versatility as a work horse and family hauler, and as such, buyers look for added equipment and luxury that makes them a little nicer to live with.

It’s also the first time Mazda has offered a more rugged variant of the BT-50 to take on the Toyota Hilux Rugged X, Ford Ranger Wildtrak and the closely related Isuzu D-Max X-Terrain.

Created exclusively by Mazda Australia for the local market, the Thunder is based on the GT dual cab 4×4 but adds a bold front end that includes an aggressive single hoop steel bull bar and Lightforce dual-row LED lightbar for extra toughness and night time illumination. 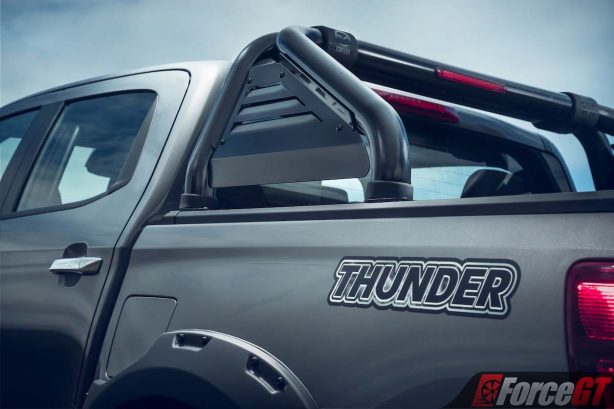 Along the sides, there are black wheelarch extensions filled by sinister 18-inch black alloy wheels (which can also be optioned on the BT-50), side steps to protect the side sills and make it easier to get in and out of the high-riding ute, as well as bold ‘THUNDER’ decals.

Moving to the rear, you’ll find a sports bar and an electric roller tonneau cover to round off the visual upgrades.

There are seven colours to choose from, including the Rock Grey Mica of our tester, all of which are no extra costs. Mazda Australia says all-up, the additional equipment adds over $13,000 in total value to the BT-50, too.

And while the BT-50 Thunder’s off-road credentials are strong, with a dual-range 4×4 system, switchable locking rear differential and 3,500 towing capacity (braked), this review focuses on the lifestyle perspective of the ute.

The BT-50’s interior is very much in keeping with the tougher outlook of the ute, and visibly more rugged than your typical Mazda SUV. The dashboard’s basic architecture is shared with the Isuzu D-Max but there are differences, notably to the upper half of the dash although we can’t say we prefer one to the other. 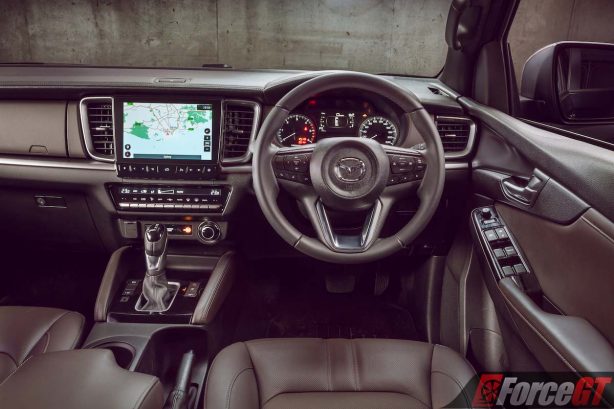 The contrasting brown leather trim certainly adds a touch of class to the Mazda’s interior and we prefer the looks of its steering wheel compared to the Isuzu’s.

Like the D-Max, and most other utes for that matter, there are no soft plastics on the upper dash although they don’t look cheap and nasty, either.

Keyless entry is standard on the Thunder, meaning no fumbling around for the key to unlock the doors as long as it is physically with you.

The seats are comfortable and come with seat warmers up front along with 8-way electric adjustment on the driver’s seat. Thanks to the reach and rake steering adjustment and dual-zone climate control air-conditioning, it’s easy to get comfortable, too.

Does it have enough room for my child seats? 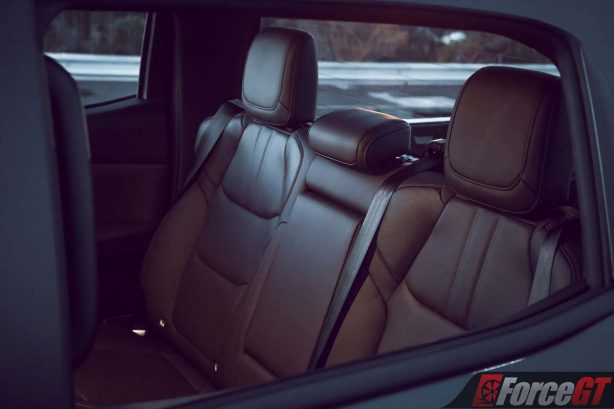 Head and legroom are in abundance both at the front and in the second row of seats. The rear seats also come with ISOFIX points and two top tethers for easy installation of child seats.

There is a pair of central air vents at the rear to keep them comfortable, and those with teenagers will be pleased to know rear seat occupants are supplied with USB/5V charger for their personal devices.

Does it have smartphone connectivity and sat-nav?

The large 9-inch infotainment screen comes equipped with wireless Apple CarPlay and USB Android Auto, but the wireless connection was a little iffy on test, dropping its connection annoyingly on a number of occasions.

The simple solution is to simply plug the phone into the USB port which also charges your phone since the Thunder does not come with inductive charging. 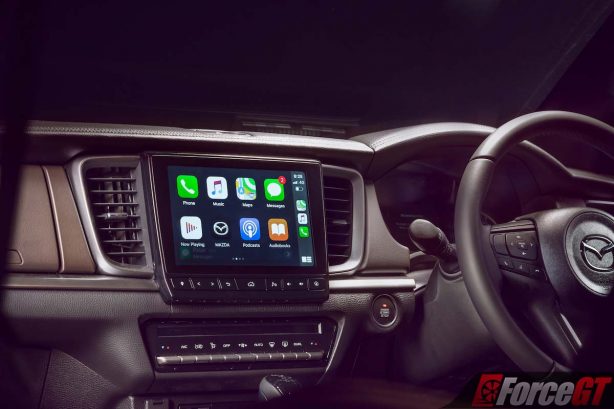 We also noticed the row of buttons underneath the infotainment screen failed to light up at night on our test car unless you touch them. It’s a glitch we did not encounter in the D-Max despite both sharing essentially the same system. Strange, as they both come out of the same factory in Thailand.

Glitches aside, the screen is relatively responsive and crisp. The embedded sat-nav works well, too, with easy inputs and quick route recalculations. Sadly, despite the generous real estate afforded, there is no split screen functionality to allow the display of more than one app.

How user friendly is the rear tray?

You get a step in the rear bumper to help with retrieving things from the tray, while payload for the Thunder is 1,065kg.

The tailgate itself is quite heavy and does not come with gas struts to help. The electric tonneau cover is a neat touch but again, we ran into some quality issues here, as it got jammed after opening only a few centimetres and refused to open or close for the rest of the test. 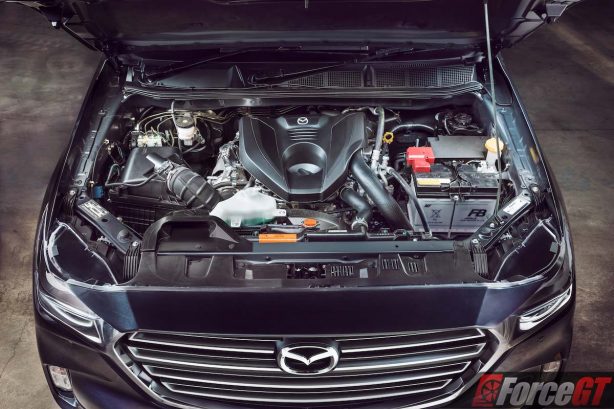 The Thunder, like the wider BT-50 range, is equipped with a 3.0-litre four-cylinder turbo-diesel engine making 140kW and 450Nm. It is connected to a six-speed automatic as tested here.

While peak power and torque are slightly behind segment leaders, the BT-50 Thunder feels effortless nevertheless, with peak torque arriving between 1,600rpm and 2,600rpm, right in the sweet spot.

There’s hardly any need to strain your foot with the throttle in daily driving as the ute just motors on lazily. The result is a fairly quiet cabin. The six-speed auto is smooth, responsive and matches well with the engine. Drivers can take manual control via the shifter, but there are no flappy paddles or drive modes to choose from. 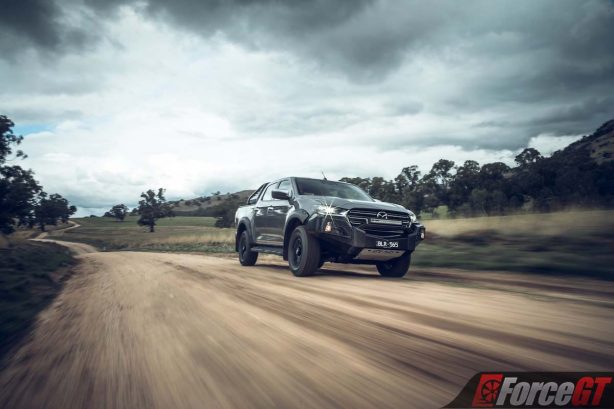 Like its donor car, the BT-50 features independent front wishbone suspension and live rear axle with leaf springs. It handles relatively well for such a large and lumbering vehicle, with good balance and composure even on questionable road surfaces.

Its ride, while still firm and can be skittish over poor surfaces unladen, isn’t brittle or jumpy. It strikes a good balance between ride comfort and work ability. Add some weight to the tray and ride will settle down further.

Its electrically-assisted steering is light and give the illusion you’re driving a much small vehicle, while turn-in is decent, too.

Is it easy to park?

It will always be a struggle to find a park for a 5.47m long vehicle, especially in tight supermarket car parks.

The front and rear parking sensors, along with reversing camera the power folding exterior mirrors do help alleviate the problem a smidgeon but be prepared to park further away and walk.

You also won’t look forward to doing any three-point turns in due to the BT-50’s large turning circle.

What about the running costs?

The Thunder Automatic is rated at 8.0L/100km in combined fuel use, with real world testing, predominantly in city traffic and some freeway run, returning around 10.0L/100km after a week.

In terms of servicing, the ute requires a visit to the dealership every 12 months or 15,000km, whichever occurs first at an average cost of around $461 per visit.

The BT-50 Thunder certainly appeal with its tougher looks and like the D-Max on which it is based, is one of the most advanced utes on the market today. It ticks all the boxes as a lifestyle vehicle. However, it does not bring any additional off-road equipment or extra grunt over the GT, which we feel is a missed opportunity by Mazda.

And then, there are the quality issues on our tester that is out of step for a Mazda.

As it stands, the BT-50 Thunder feels like an accessory pack special.