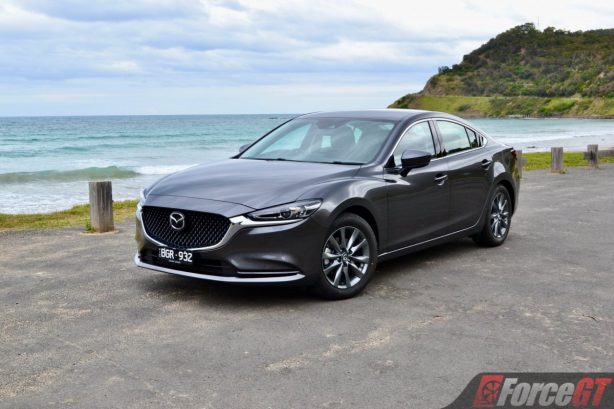 There was a time when the humble sedan was the quintessential family hauler. It was a common sight on most driveways, as well as shopping mall car parks. In the last two decades though, the sedan has been gradually replaced by the Sport Utility Vehicle, or SUV as it is most commonly called. But despite the SUV offensive, the sedan managed to persist and defend its place in the ever-changing automotive landscape.

Is there still appeal in the sedan? To answer that we took a sedan out on a weekend getaway, stuffing it with things and driving it on less frequented trails like how we would normally use our SUV for, in a bid to find out if we really need to be buying SUVs instead of sedans.

And this week, we were given the keys to just the right car for it – a 2021 Mazda 6 sedan. It is hard to believe the 6 has been around for nearly a decade, but continuous improvements have kept it fresh. It is still one of the best-looking medium sedans on the market, and Mazda’s increasingly upscale approach to design has now made the 6 a semi-premium offering, but without the premium price-tag. 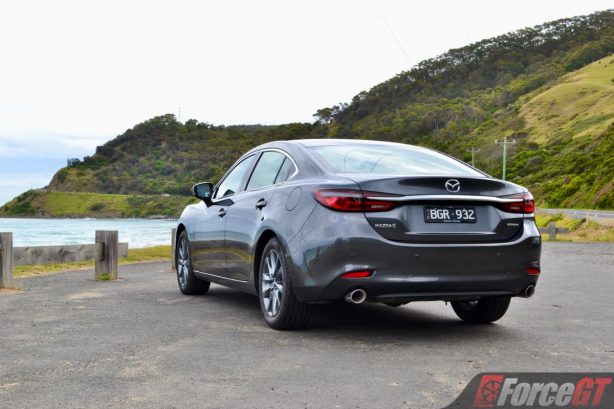 To make the comparison against the SUV more interesting (and fair), we were going to be driving the range-opening Mazda 6 Sport, which retails at a very family-friendly $34,490 plus on-road costs. This is a medium sedan that costs $3,000 to $4,000 less than an equivalent medium SUV. The sedan has the upper hand from the outset.

With the Australian summer in full swing, we decided to head down to the coast and the region that presents the best mix of open country roads, winding coastal routes and unsealed adventure trails is none other than the Otway Ranges in Victoria’s South West. From our base in Melbourne, the 250km drive would take us westwards toward Geelong and onto the famous Great Ocean Road, passing through the coastal townships of Anglesea, Lorne and Apollo Bay, before ending in picturesque Glenaire where we would be putting up for the weekend. 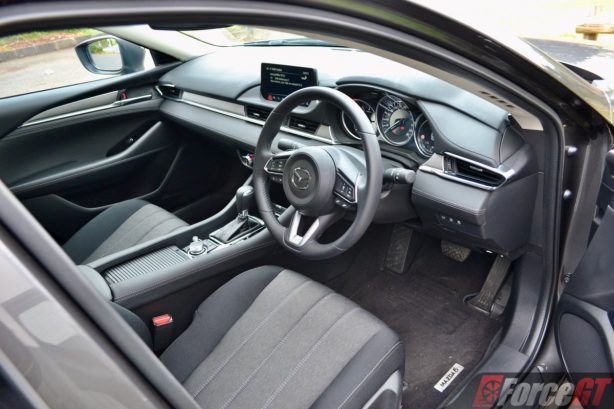 A common perception amongst car buyers is that the boot of an SUV is larger than that of a sedan. Well, the Mazda 6 has a 474-litre boot, some 32 litres larger than that of the Mazda CX-5, which shares the same platform as its sedan sibling. The boot in the Mazda 6 is deep but it may not have as big an aperture as the CX-5. For big and bulky items, an SUV may still be the better option, but for pure carrying capacity, most sedans actually fair better.

With a medium and a small suitcase stored in the boot, there was still room for our beach gear which included two beach chairs, a beach umbrella, and a camping tent. If the space is not enough, there is always the option to drop the rear seats down for added space. 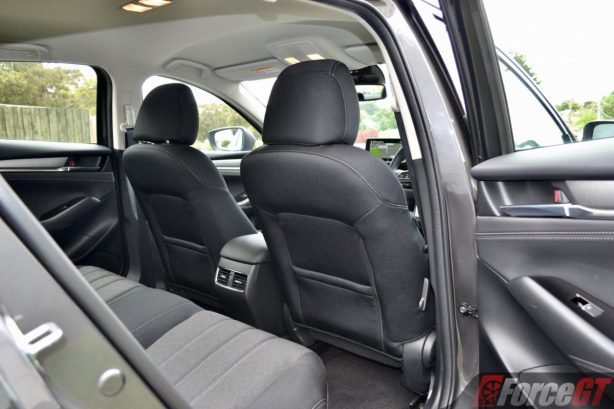 With takeaway coffees filling the cup holders, it is time to embark on the drive. But first, we had to get out of Melbourne’s notorious urban traffic, which is a good way to test out the Mazda 6’s city manners and daily driveability.

The 2.5-litre normally aspirated four-cylinder engine may lack a turbo (reserved for the upper-spec GT and Atenza models) but it runs Mazda’s SkyActiv technology, which is a fancy name for high compression. At 13:1, the higher than usual compression ratio helps deliver greater torque, which at 252Nm, is pretty impressive for an atmospheric four-pot. But the fact that it only peaks at 4000rpm means the engine needs a fair bit of work before it starts to produce any reasonable pull, not that its 140kW of power is much to shout about either. On the road this translates to quite a bit more revving than a turbo engine would require to get going, which is just fine because the SkyActiv engine loves to rev and is not trashy by any means. And once above 3000rpm the power delivery is strong and linear all the way to the 6500rpm cut off.

The six-speed auto has ratios that are well spaced out to make the most of the engine’s torque, but at times it felt like it could do with one or two more gears to keep operating in the engine’s powerband. 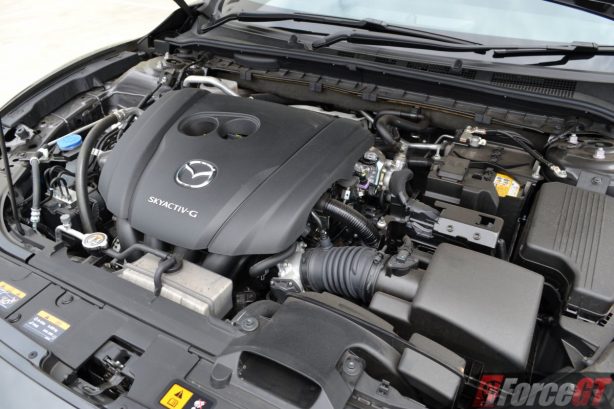 At 4865mm long, the 6 is longer than most mid-size SUVs, which makes squeezing into the city’s tight parallel parking spot a bit of a challenge. But the myriad of parking aids helps, this includes a rear-view camera, rear parking sensors and rear cross traffic alert.

On the go, there are also driving aids to make life on the road much easier. As a base model, we were not expecting much but the fact that the Sport came with all the bells and whistles was a surprise. Fitted as standard are Adaptive Cruise Control, Lane Keep Assist, Lane Departure Warning, Blind Spot Monitoring and Automatic Emergency Braking (forward and reverse). Also equipped are Head-Up Display and Automatic High Beam. The 8-inch infotainment display is about 2 inches smaller than today’s norm, but it does come with Apple CarPlay and Android Auto as well as satellite navigation, and the Mazda MZD system is still one of the most user-friendly in the segment. The screen can be operated by touch while stationary, or via the rotary knob in the centre console. 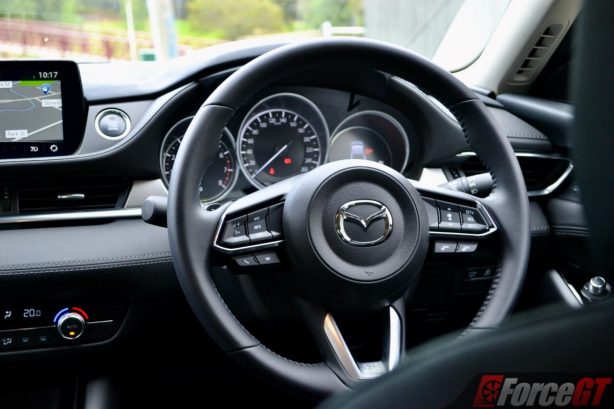 This is a sub-$35k medium sedan and the exhaustive list of safety features and driving tech makes it exceptionally good value. Its value proposition is further boosted by an interior that does not look and feel anything remotely base trim. There is leather on the dash and door, which, despite being synthetic, feels appropriately high quality. Those gloss black trims in the centre console and around the door controls are deep and rich, and the aluminium-look trim inserts around the cabin look fine and delicate. Elsewhere, all knobs and controls have a finely tuned haptic feedback to them. Even the standard 6-speaker stereo is more than up to the task of bringing your favourite tunes to live.

Granted, the seats are fabric and not leather (as you would expect for a base model) but they, too, have neat contrast stitching and hardly look ‘poverty pack’ at all. Good support from the seats, couple with generous legroom make the Mazda 6 a supremely comfortable cruiser, though the slopping roof line does impede on headroom in the back. 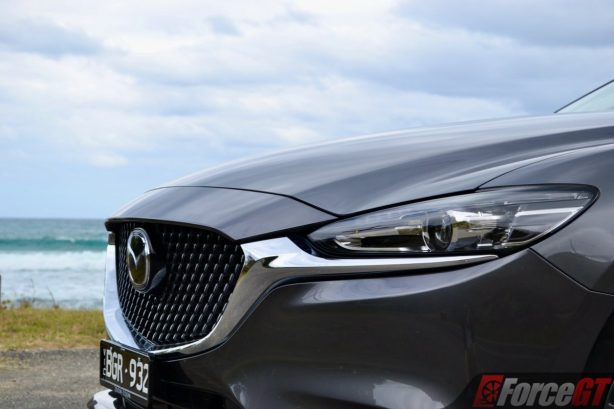 With the city traffic behind us, we were finally making good progress down the Princes Freeway towards Geelong. Quickly became apparent was how much thriftier the car was in fuel use on the freeway. With a boot full of luggage and the air-con constantly at work to keep out the summer heat, the Mazda 6’s trip computer hovered around just 6.0L/100km, down from the already efficient 9.0L/100km average we saw earlier in congested city driving.

The freeway fuel economy is better than what we have seen in many SUVs, simply because the low slung, sleeker silhouette of a sedan inherently has less drag than an SUV at high speeds, which can help save fuel. 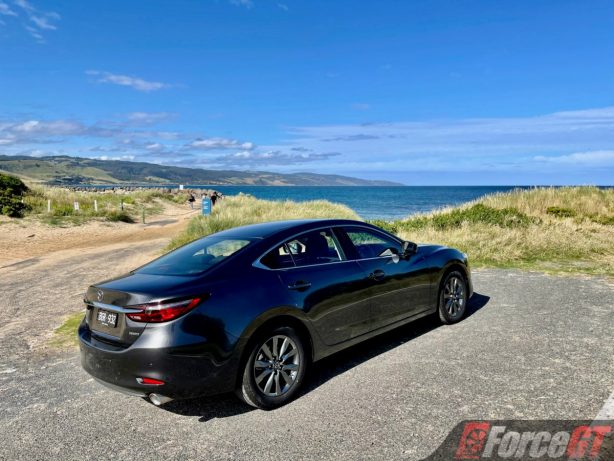 A swift exit from the Princes Freeway just after Geelong signalled the end of our freeway run, and after a similarly leisurely 20 kilometres along Anglesea Road, a right turn at a roundabout brought us to the start of the famous Great Ocean Road. Stretching from Anglesea to Port Campbell, it is a 170km scenic route that hugs tightly to the coastline, presenting plenty of opportunities for us to assess the Mazda 6’s dynamic abilities.

The 6 remains one of the best handling cars in the mid-size sedan segment, with lively response to steering inputs from the chassis, excellent composure, and plenty of grip. It is no sport sedan, but the 6 can still be quite an entertainer on winding roads. Precise and perfectly weighted, the steering, especially, is such a joy to operate.

You would think ride comfort would be compromise for handling, but no, the Mazda 6’s suspension is pretty well sorted, firm enough to keep it planted through the bends, yet still nicely compliant to smooth out bumps and ruts on broken roads. 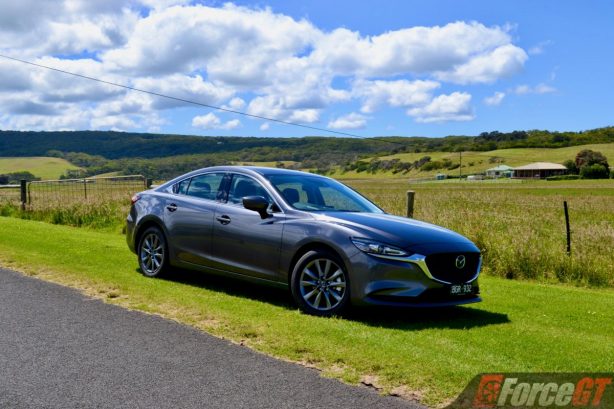 With the car’s Driver Attention Alert prompting for a break, we might as well. After a quick bite in the popular summer coastal holiday hotspot of Apollo Bay, we were on our way again. Heading further west toward the Great Otway National Park, we decided to make a quick diversion to visit the Beauchamp Falls near the sleepy town of Beech Forest. With an unsealed track leading to the falls, the SUV would be the most natural fit for such terrain, but it is far from daunting in a sedan like the Mazda 6. The lack of all-wheel drive may not afford as much traction on overly loose surfaces, but it was still very manageable overall.

Back on the black top, we pressed on toward Glenaire, our final destination. The Great Ocean Road now breaks out of the lush rainforest of the Otways and onto the vast plains of Hordern Vale, where the picturesque landscape would make for a great postcard photo.

As the road winds around farmlands, the Mazda 6 once again show its edge over an SUV, with it delivering a more fluidic and connected drive.

The road snakes uphill at the end of the plains, with a right turn at the crest bringing us to the Glenaire Cottages, our accommodation for the weekend. Time to disconnect from the world and indulge in nature.

The Mazda 6 proves that a sedan is just capable as an SUV when it comes to family duties, including the odd weekend getaway. And with a sedan like the Mazda 6, the usually long and boring drive to the country can even turn enjoyable.

At $34,490, the base-spec Mazda 6 Sport is hardly base spec at all. With generous equipment in an upscale package, it represents exceptional value and is a strong alternative to an SUV.