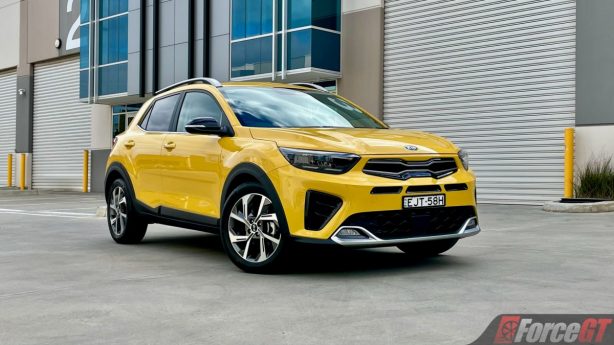 The already saturated city crossover segment has welcomed yet another player. Arriving fashionably late, literally, the new Kia Stonic is set to shake up the segment with its striking and tasteful looks.

“European styling with youthful character”, reads the Kia Stonic’s media release. And it’s not a false claim. If it wasn’t for the Kia badge, the Stonic wouldn’t look out of place on the showroom floor of a European marque.

But it’s not as if the Koreans have just taken a page out of Volkswagen’s or Peugeot’s book and created a mesh up of continental accent. The silver rear bumper garnish with integrated non-functional exhaust tips aside – which resembles those from Mercedes-Benz SUVs – the Stonic’s styling is largely original. And in range-topping GT-Line with its gloss black accent and black roof, it looks appropriately premium, too. 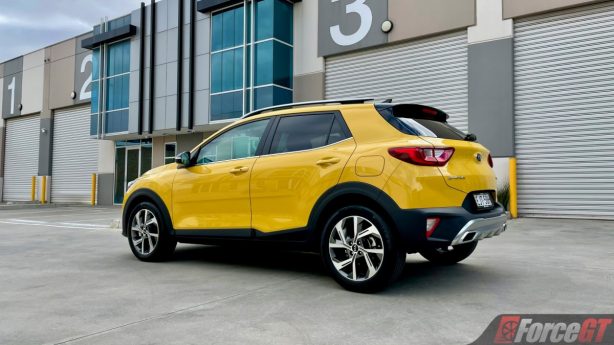 While the Stonic’s connection to the Kia Rio (sharing the same underpinnings) may not be apparent in the exterior, it’s all revealed on the inside. Carried over almost unchanged from the Rio, the interior is well laid out and functional with minimal clutter, but its generic design is not quite a match for that confident exterior, save for the seats which have a European design flair (GT-Line).

The mostly monotoned cabin does score highly in practicality, however. There’re large bottle holders on all doors, along with cup holders in the centre console. Storage compartments are plenty as well, including a decent size glove box, phone compartment under the centre stack and storage under the centre armrest. 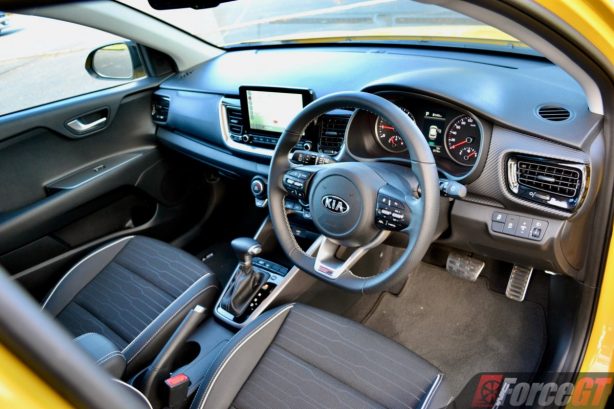 The boot measures 352 litres in capacity, which is about average for its class. Fold the 40/60 split rear seats and the space expands to a generous 1155 litres. The boot lip is rather high, however, making loading large, heavy objects into the boot a little more challenging.

Cabin comfort and space is one of the best in class. The seats are comfortable, with the front ones also offering good support. There’s plenty of room for the front occupants to get comfortable with, while those seated in the rear also enjoy decent leg and headroom. The large windows let into the cabin a good amount of natural light, adding to the sense of space. 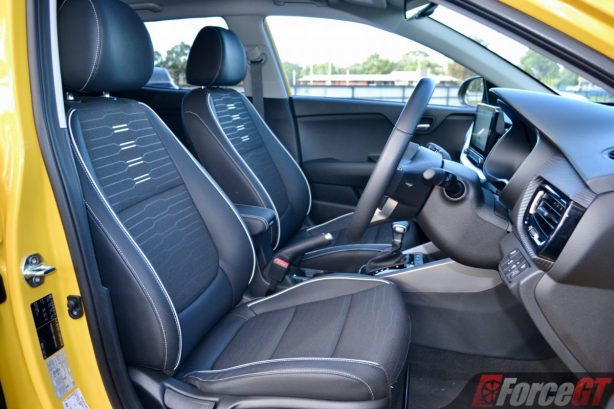 In terms of technology and connectivity, all Stonic models come standard with an 8-inch infotainment touchscreen which is both easy to use and responsive to the touch. Apple CarPlay and Android Auto connectivity is standard feature, though strangely, it’s wireless only in the base S trim, with upper spec Sport and GT-Line variants still requiring a cabled connection. The upper spec models get built-in satellite navigation as standard.

Safety is taken care of by essentials such as Automatic Emergency Braking (AEB), Lane Keep Assist (LKA) and six airbags, but the lack of Blind Spot Monitoring and Adaptive Cruise Control in the top-spec GT-Line model is questionable. 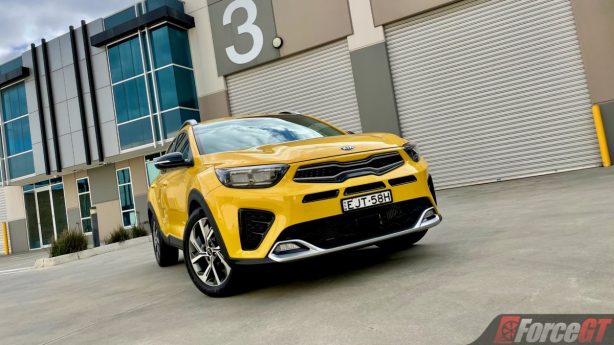 If budget permits, the 1.0L forced fed three-pot is the pick, which means digging deeper for the GT-Line spec. While it makes the same amount of power as the atmospheric 1.3L, it’s spread out across a wider rev range – 4,500 to 6,000rpm. The stronger torque also arrives much earlier at 1,500rpm and hangs around until 4,000rpm.

The result is an engine that pulls stronger right from the get-go, delivering a much better driving experience, especially around city. The engine is paired with a 7-speed dual clutch gearbox, which aids in efficiency and power delivery. It’s quick to downshift when more power is called for, though up shift can be quicker in Sport mode. There’s also a slight hesitancy in take off at times but it’s not very noticeable. 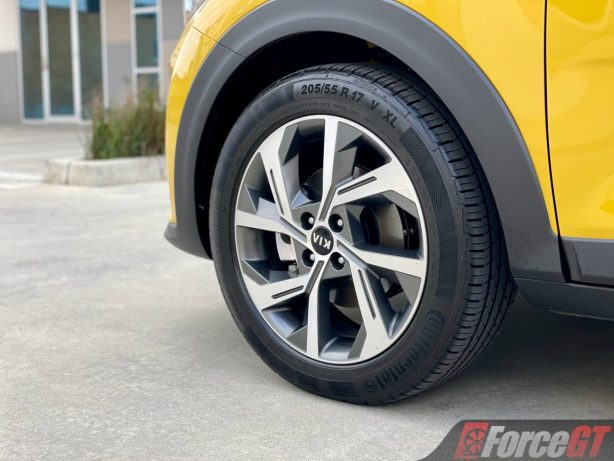 A three-cylinder engine is not always the most refined engine naturally, but the Kia unit is mostly smooth on cruise and low load. Under normal driving condition it’s hard to tell that it’s a three-pot. In fact, it’s even more refined than some of the four-cylinder engines out there.

The combination of the pint-size turbo engine and twin-clutch gearbox really does yield good fuel economy, with a tested real-world average of just 6.9L/100km after about 300km of mixed urban and freeway driving.

While the styling and powertrain may have European flavour, the handling is tuned for Australia, according to Kia anyway. What this means is that the Stonic feels dynamic around the bends yet compliant on average roads, delivering a fine balance between ride and handling. Grip level on tarmac is good, too, considering its front-wheel drive nature (there’s no all-wheel drive option). 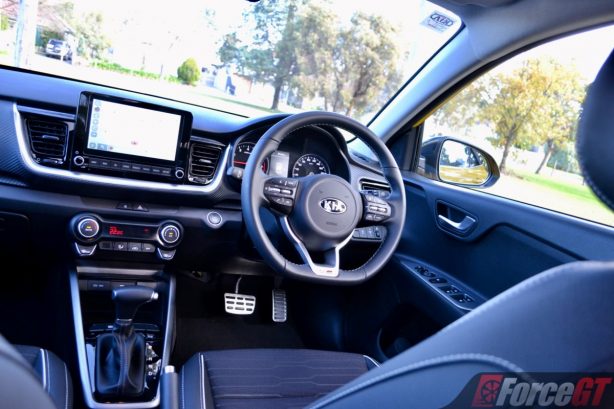 In a Kia review, it’s hard not to talk about warranty. With a standard factory warranty of 7 years uncapped by kilometres, Kia has one of the longest warranty period in the market. It’s backed by 1 year of complementary roadside assist.

The Kia Stonic’s suitably restraint European design flair has produced a smart yet stylish looking city crossover that will no doubt resonate well with trendy young buyers. Top that with all rounder performance, the Stonic is definitely one compact crossover worth checking out.

What do you do when you have mastered the art of making mainstream cars? You …