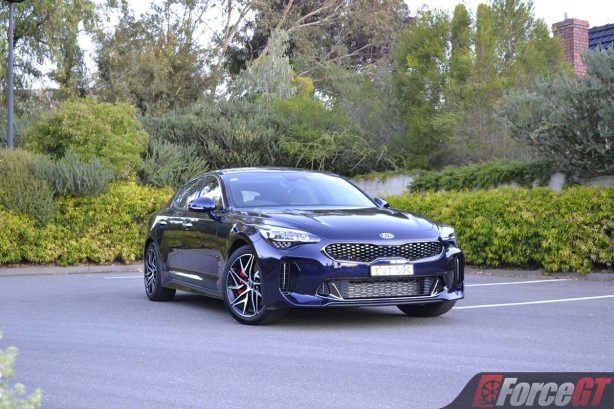 Four years ago, Kia wowed us with its low slung, 4 Series Gran Coupe-sized five-door ‘liftback’ Stinger flagship. It did amazing wonders in giving the brand much kudos beyond what its hatchbacks and SUVs were capable of.

It was the first rear-wheel drive car the Korean brand has ever produced. Developed under the watchful eyes of ex-BMW M Division chief, Albert Biermann, the Kia Stinger was a handsome, attention-grabbing driver’s car that showcased the brand’s capabilities. Best of all, you don’t need to take out a mortgage for it.

It arrived just when the local heroes (we’re looking at you, Holden Commodore and Ford Falcon) decided it was all too hard, packed up, and left.

And while the segment was never what it used to be, there was still life left and the Stinger took full advantage of it, impressing punters and selling in decent enough numbers to keep local bosses happy. 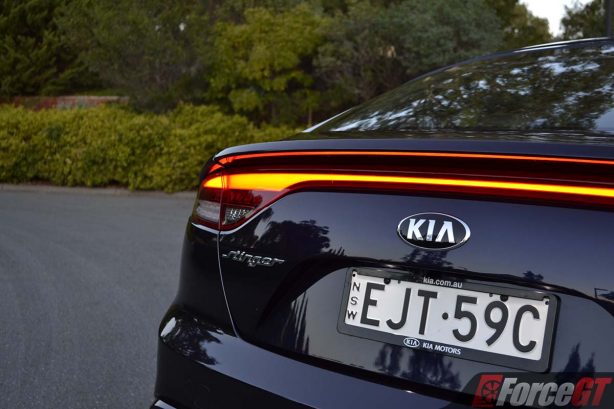 Some might exclaim in horror at those prices but to get a comparable rear-wheel drive sports sedan from the premium marques will set you back by $15k to $20k.

Of course, what it lacks in badge kudos is made up with spades of equipment and Kia’s unbeatable seven-year warranty.

Building on the Stinger’s previously awarded 5-Star ANCAP safety rating, new and upgraded safety technology for the 2021 model includes improved AEB with Cyclist Detection and Junction Assist, the latter utilises the front camera and radar to apply the brakes if danger is detected while turning across oncoming traffic. 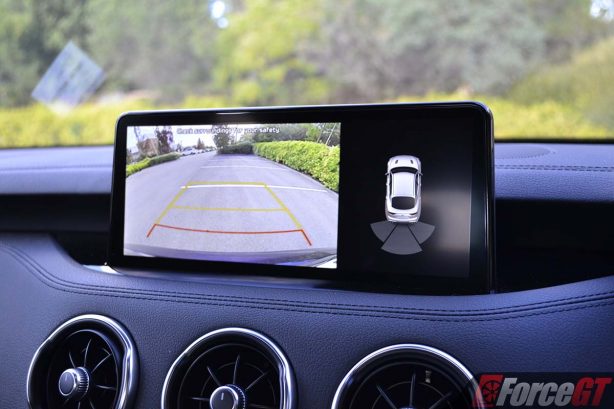 Kia has also upgraded the Stinger’s Lane Keeping Assistance with Road Edge Detection that steers the large sedan back to its lane if it wonders off towards the road edge.

All these are on top of standard fare such as ABS, ESC, Vehicle Stability Management, rear-view camera, rear parking sensors, driver attention alert and seven airbags.

What’s missing on the 330S however, are Blind-Spot Collision-Avoidance Assist and Rear Cross-Traffic Collision-Avoidance Assist, both of which are standard on the more expensive GT-Line and GT. Similarly, the novel Safe Exit Warning, which warns passengers visually and audibly if they attempt to open the doors with traffic approaching from the rear is only available on the GT’s. 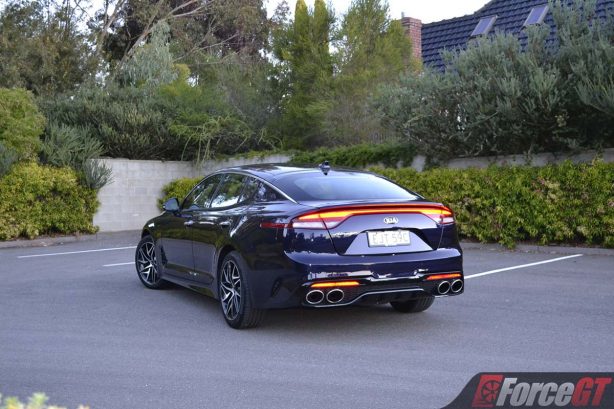 On the styling front, we have always been big fan of the Stinger’s design. The subtle facelift only enhances what is already a handsome design; in particular the new rear LED taillights that now come with a distinctive and classy light signature that extends the full width of the vehicle.

Meanwhile, the new turn signals feature 10 individual LED units on each side, arranged in a grid pattern that Kia say represent the chequered flag.

Up front, the 330S now gets new reflector-type LED ‘combination’ headlights with Porsche-esque daytime running lights that look more premium than before. Its front bumper has also received a slight revision with vertical air intakes that all up, give the car an even more upmarket look.

The 330S rides on 18-inch wheels instead of the 19s fitted to the GT-Line and GT. The fresh design is also an improvement over the old wheels, behind which hide a set of 350mm clamped by 4-piston caliper Brembo brakes. 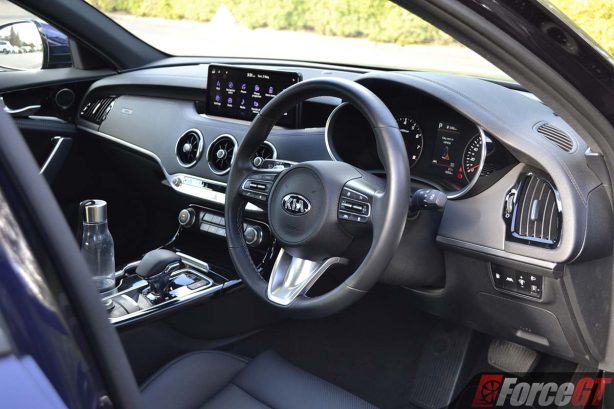 Stepping inside, the Stinger’s already pleasant and aerospace inspired cabin is largely carried over (which isn’t such a bad thing), with the most notable upgrade to the interior being the larger 10.25-inch touchscreen (up from 7.0-inches) with embedded sat-nav, Apple CarPlay and Android Auto connectivity and frameless auto-dimming rear view mirror.

However, unlike newer generations of Kia/Hyundai’s infotainment system, both Apple CarPlay and Android Auto are of the wired variety instead of wireless.

The larger screen also brings Kia/Hyundai’s latest software with pleasingly modern and crisp graphics. The screen itself is almost as responsive as a smartphone and the widescreen format means you can display multiple apps all at once, navigation and music.

The car’s Bluetooth can also now be connected to multiple smartphones at the same time; conveniently handy if you have a personal as well as work phone. 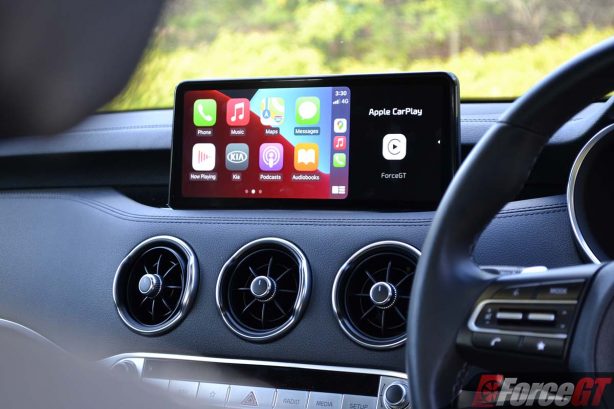 While you won’t find the snazzy digital instrument cluster that’s standard on the new Sorento in the Stinger, the 330S’ previous 3.5-inch mono-TFT driver’s information display has been replaced with a larger and more advanced 4.2-inch colour-TFT cluster with improved clarify and a wider range of information displayed, including a G meter.

The Stinger’s detonator-style Smart Key also adds a remote start function that lets you fire up the engine to get the climate control running before you hop in.

Interior built quality continues to impress, too, with soft touch surfaces on most of the dashboard surface with the exception of some hard plastic low down on the centre console. 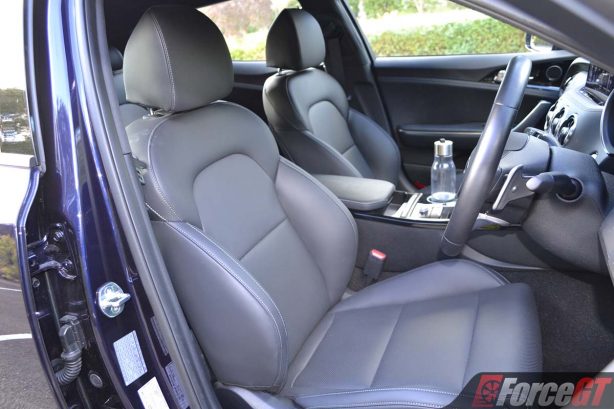 At the back, there’s decent legroom and more headroom that you’d expect from the plunging roofline. There’s a pair of air vents but no separate rear climate control. Those with little ones will also be pleased with the 3 child restraint anchorage points, along with 2 ISOFIX positions.

There are two 12V power outlets – one in the front console and one behind the centre console, along with a couple of USB ports.

Storage is well catered for, too, with 2 cup holders up front and 2 at the back, along with a similar number of bottle holders on the doors.

Lifting up the manual tailgate reveals a 406L boot space, which can be expanded to 1,114L by flipping the rear backrests. However, they don’t fold completely flat, not uncommon in a vehicle of its ilk. 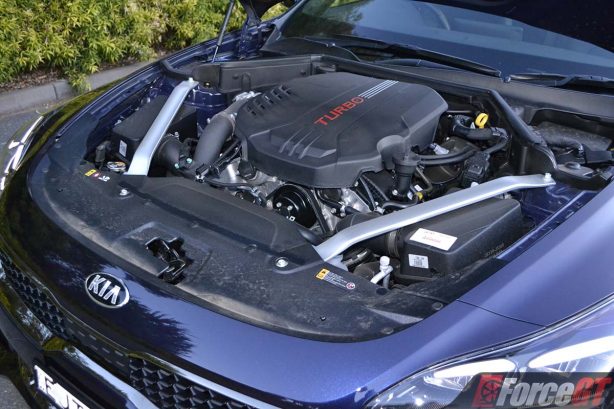 At the heart of the Stinger is Kia’s familiar and awesome 3.3-litre twin-turbo V6 that sees a slight climb in power to 274kW (from 272kW), thanks to the new variable sports exhaust with larger exhaust tips that replaces the Australian-developed bi-modal unit of the superseded model. Torque remains unchanged at 510Nm.

It continues to drive the rear wheels via a shift-by-wire type eight-speed torque-converter automatic transmission and a limited-slip differential. Kia claims the 330S is capable of sprinting to 100km/h from a standstill with launch control in 4.9 seconds – it’s fast.

It’s a muscular and relaxed unit that matches well with the Stinger’s grand tourer disposition.

While it doesn’t have the classic V8 growl Commodore and Falcon fans are used to, it does put a big wide grin on your face the moment to hit the start button. The car awakens with a throaty exhaust note that hints at what’s under the bonnet.

Floor the accelerator and the Stinger deliver its kilowatts in fluid urgency with hardly a moment of hesitation, the eight-speed automatic snapping into gear rapidly. 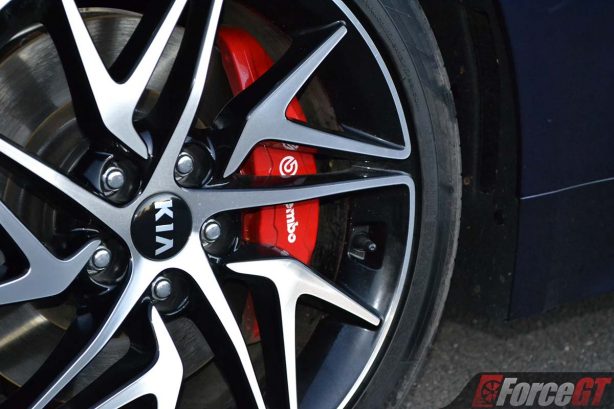 The 225/45 R18 Continental ContiSport Contact 5 tyres deliver good grip and it feels planted on the road, though if you’re impatient by asking too much too soon, its rear will get a little playful. However, the well-calibrated stability control does step in to keep things from getting unruly.

There are five drive modes to choose from – Comfort, Eco, Smart, Sport and Custom. While they are pretty self-explanatory, in reality, there isn’t a great deal of distance between them.

You start in Comfort which does what it says. We didn’t spend much time in ‘Eco’, as it stifles all responses in an effort to save fuel. ‘Smart’ is supposed to learn your driving style and adapt to it, but we didn’t notice much difference. ‘Sport’ firms up the steering and hang on to revs a little longer.

‘Custom’ allows you to pick and choose from the menu. Our favourite is steering in Comfort, while engine in Sport.

No matter which mode you choose, the Stinger 330S’ steering is well-weighted and responsive, while its well-judged, fixed rate suspension soaks up most ruts and bumps far more effectively than we’d expect from a sports sedan. The Brembo brakes have good pedal feel and do a good job is washing away speeds.

The Stinger is covered under Kia’s capped price servicing regime which cost $4,243 over seven years. It requires an annual visit to the dealership or every 10,000km, whichever comes first with servicing costs ranging from $350 to $952 for a major service.

Kia has done a great job in enhancing what is already a wonderful and fun car. It will put a smile on your face every time you get behind the wheel. And while the Stinger remains relatively popular in Australia, overseas reception aren’t as promising. This could be the last one we’ll ever get and it’s a big shame.