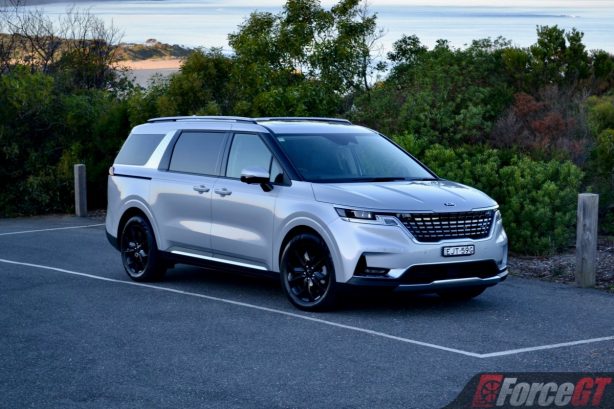 The Kia Carnival has grown from its humble beginning as a cheap and cheerful way of carrying many people to a household name for the segment. Now in its fourth generation, the Carnival continues to make big strides with a bold new design, revamped cabin and improved tech.

Like before, the 2021 Kia Carnival line-up consists of four grades, with pricing starting from $46,880 for the entry-level S petrol model and stretching to $66,680 for the range-topping Platinum Diesel.

Making a vehicle as large as the Carnival look interesting is no easy task, but Kia has done an incredible job here. The new Carnival is one of the boldest and smartest looking people mover around, thanks to its contemporary approach to styling and harmonious blend of sculpted surfaces and strong lines. 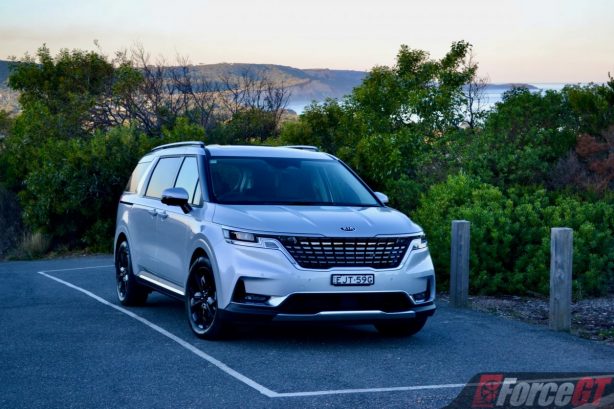 The front fascia makes strong visual statement with a large grille that extends into the headlights, while the rear catches the eye with a full width taillight.

The A and D pillars are blacked out to reduce visual bulk, while the C pillar features subtle crystal-like texture on its surface for added appeal. 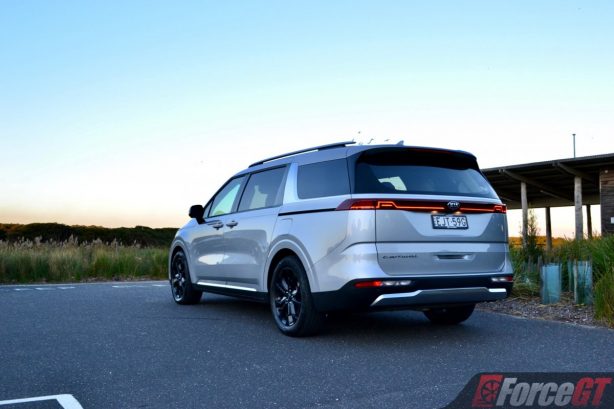 Neat detailing sees the rear door rail concealed within the shoulder crease and the rear wiper cleverly integrated into the roof spoiler and hidden out of view when not in use.

SUV-inspired elements are evident as well, such as the metallic lower skid place and roof rails.

Depending on grade levels, wheel sizes range from 16 to 19 inches, with the latter finished in black and fitted exclusively to the range-topping Platinum trim tested here.

Like the bulky exterior, the vast cabin serves as a blank canvas for creativity to flourish. And Kia has again delivered. Inheriting design elements from the Sorento SUV, the Carnival’s interior still manages to look interesting with a good but restraint mix of trimming. 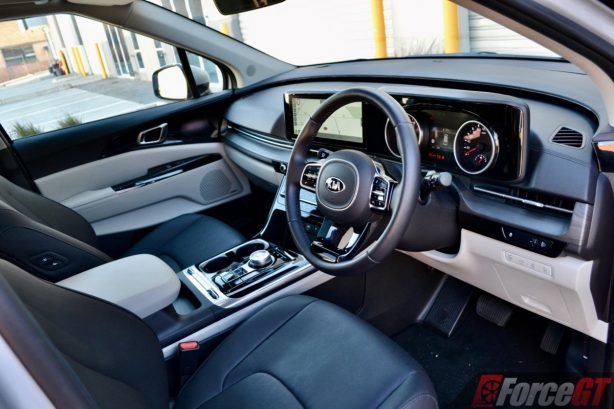 The mostly grey dashboard is lifted with deep gloss black trimming on the centre console and steering wheel spokes, as well as aluminium-look inserts on the air vents, buttons and knobs.

In range-topping Platinum guise, the well-presented interior combines with full leather upholstery (synthetic) to radiate a property premium, VIP vibe that is quite a major step up from the previous interior.

When you think the previous Carnival could not get any bigger, this new model has grown in almost every dimension. It’s now 40mm longer at 5155mm and 10mm wider at 1995mm. The added length has allowed the wheelbase to be stretched by some 30mm, liberating even more interior space.

In terms of cabin space, the new Carnival plays at the top end of the segment, with unrivalled space for up to eight adults, including those seated in the third row. The second-row seats can be slid forward to free up more space for the third row if needed, and with a simple pull of a lever the second-row seat back tilts forward to free up a generous passage to the rear seats. 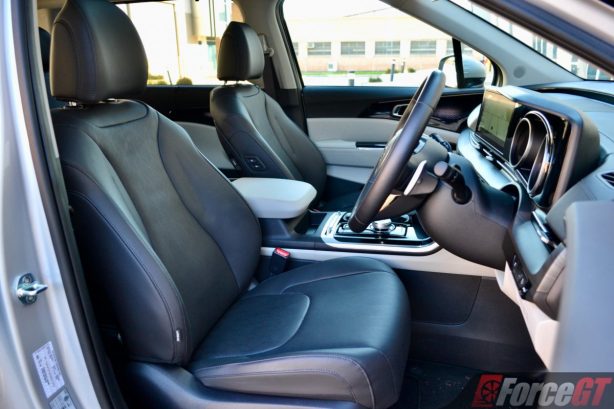 As a people mover, few cars come close to the Carnival in terms of spaciousness and comfort. 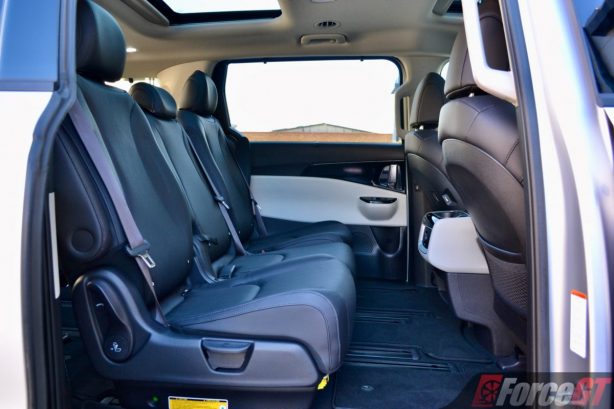 Where things can be improved though, are in cabin storage. Make no mistake, the Carnival has all the usual storage bins and compartments that you’d have come to expect in a modern family car, including sizable cup and bottle holders, centre storage bin and glove box, but a large people mover should offer more.

For instance, the rear doors lack door pockets, and perhaps the front seat backs could do with a drop-down tray for the second-row passengers. The elevated centre stack at the front could also do with additional storage underneath, or some side pockets.

It’s understandable why these were omitted though, and it’s because of the notion of style being disrupted by having too many practical elements. The designers’ quest for style prevailed over practicality in this instance. 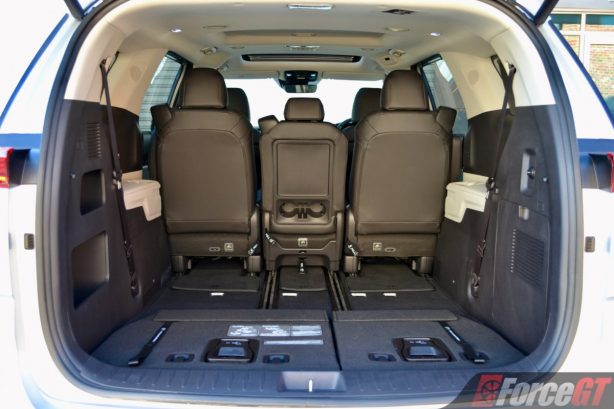 When it comes to cargo space, the Carnival shines once again, offering best-in-class boot space of 2,785 litres with the third-row seats folded. Even with the third-row in use, there’s still a voluminous 627 litres of available space.

The boot lip is now 26mm lower than before, making loading easier.

The touchscreen dispenses high clarity graphics and its intuitive menu structure can be operated with smartphone-like swipe and pinch gestures, though in map view some on screen buttons are too small to be operated safely while on the move.

Strangely, only the lower-spec 8-inch screen in the base S model supports wireless Apple CarPlay and Android Auto. 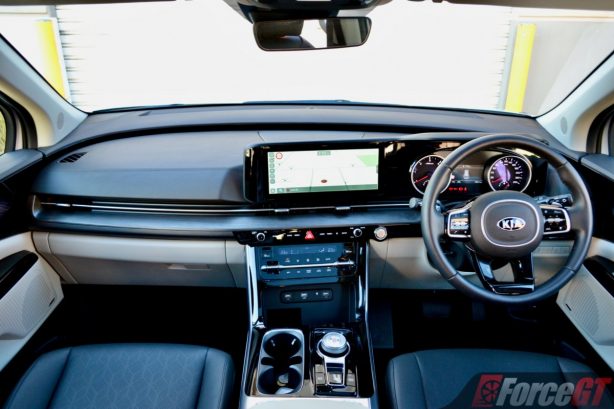 The base S model gets 6 speakers as standard, while Si and SLi variants have 8 speakers. Top-spec Platinum grade is equipped with a punchy 12-speaker Bose premium surround sound system.

The range-topper is also fitted with a whole lot of other goodies including a wireless phone charger, twin electric sunroofs, heating for the steering wheel and first and second row seats, ventilation and memory adjuster for the front seats, and retractable window blinds for the second and third row seats.

It’d really complete the wish list if the Platinum had also come with a head-up display (HUD).

Like before, the Carnival is offered with two powertrain options – both newly developed. The 3.5-litre V6 petrol engine has increased in displacement from the previous 3.3-litre unit. It now produces 216kW of power at 6400rpm and 355Nm of torque at 5000rpm, a gain of 10kW and 19Nm. Despite the larger engine, fuel economy has improved 10 percent to 9.6L/100km.

Both engines are paired with an eight-speed torque converter automatic and drive the front wheels. 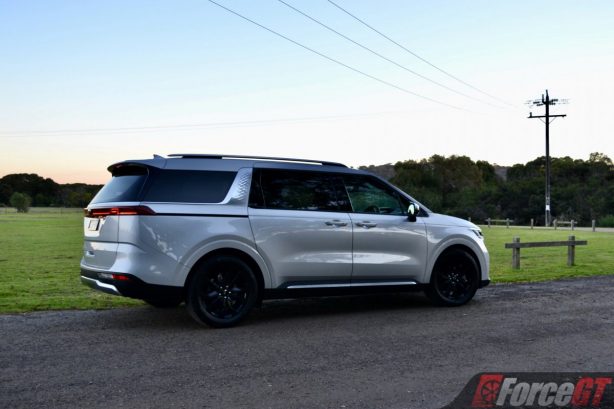 The Platinum grade tested here was the diesel variant and one thing obvious after only a few kilometres into the drive was just how much smoother this new oil burner is compared to the old.

The new level of refinement is very much welcomed as it means diesel clatter is kept mostly at bay and on cruise one could almost mistaken it as a petrol unit.

Performance is right up there as well. While it may not have the throttle sharpness of a petrol, there’s good linearity in power delivery, and the strong low to mid-range torque does help get the two-tonne behemoth up to speed relatively quickly. 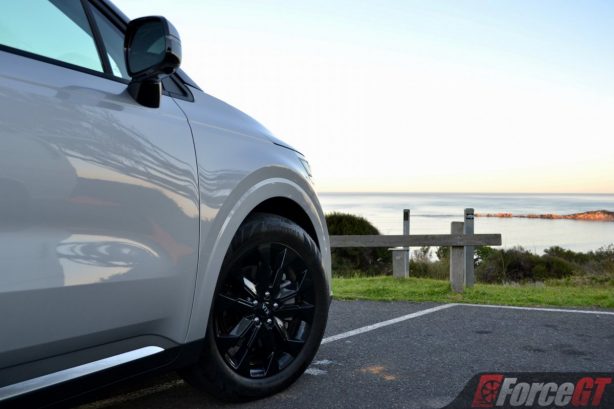 Fully loaded with eight passengers plus some luggage, the Carnival diesel continues to work hard in getting things moving along swiftly, with it hardly ever feeling bogged down.

At the same time, the eight-speed auto hustles along discretely in the background without bringing much attention to itself.

The previous Carnival triumphed on its car-like handling but exhibited a little too much roll in corners. This new model continues that car-like feel but without the wallow. The Australian tuned suspension plays a large part in tightening up the Carnival’s dynamics on our unique roads without sacrificing comfort.

The Carnival is a large vehicle, but it feels quite the opposite to drive. The steering is light and easy and the brakes are strong enough to rein in speeds.

For any people mover, comfort is paramount, and the Carnival is no doubt one of the most comfortable ways to transport people over long distances, thanks to a compliant suspension smoothing out much of the road’s imperfections. Road and wind noise is also noticeably less in the new car compared to the old.

In a Kia review, it’s hard not to talk about warranty. With a standard factory warranty of 7 years uncapped by kilometres, Kia has one of the longest warranty periods in the market. It’s backed by 1 year of complementary roadside assist, renewed for an additional year (up to a maximum of 8 years) each time a service is done at a Kia dealer.

The people mover segment isn’t a saturated one. If you’re looking for a large people mover with all the essential features, your options narrow down to just a handful (Toyota Granvia, Volkswagen Caravelle, to name a few others) and the Kia Carnival is one of them.

Is it the pick of the small bunch? Most definitely. It’s a people mover that covers almost all basis and one that others would be benchmarked against.

Here’s hoping Kia would give us a hybrid variant and it isn’t too far away.

Previous The Subaru WRX Sportswagon is back!
Next 2022 BMW M2 to be offered with manual