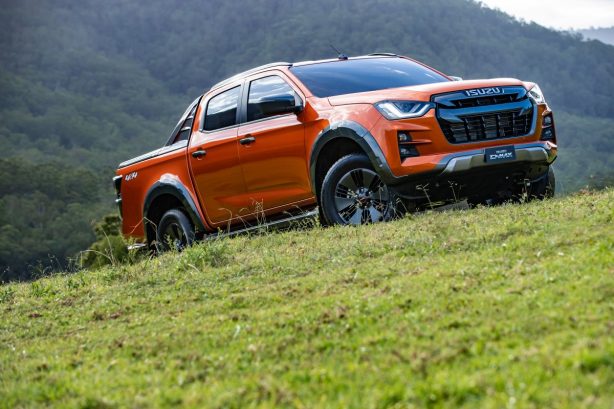 Utes used to be bare-bone workhorses to cart your gear and tools around but these days, they are jack-of-all-trades that also double as lifestyle and family vehicles, with luxury, technology and comfort to match.

The 2021 Isuzu D-Max is one of the latest breeds of these ‘versatile utility vehicles’ (VUV…. Hmm, kinda has a good ring to it, don’t you think?), and the new model is positively more hi-tech and comfortable than ever before, especially in the range-topping X-Terrain spec tested here, which packs convenience and safety features that not so long ago were confined mostly to luxury vehicles.

It competes in a segment that isn’t short on talents, either, from top performers like the highly popular Toyota Hilux and Ford Ranger, to supporting acts like the Mitsubishi Triton and Nissan Navara.

And to ensure all bases are covered, the 2021 Isuzu D-Max range is extensive, spanning no less than 20 variants with prices starting from $33,200 plus on-road costs for the D-Max SX High Ride 4×2 manual, and stretching all the way to $63,900 plus on-roads for the full fruit, four-wheel drive D-Max X-Terrain. There are single cab, crew cab and space cab, rear- and four-wheel drive, as well as 6-speed manual or automatic transmission. 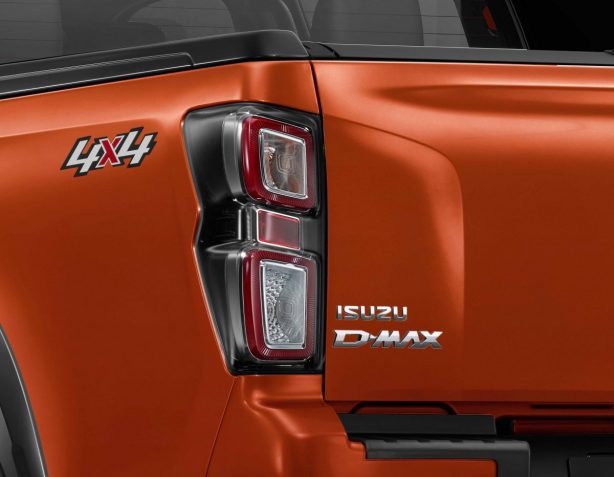 It sports new engine internals, including a more efficient electronically controlled Variable Geometry System (VGS) turbocharger and high-pressure direct injection system that makes the most of each drop of diesel.

Most variants in the 4×4 range are offered with either a 6-speed manual or 6-speed automatic transmission with the exception of the X-Terrain, which is paired exclusively with the latter.

However, choices are slightly limited in the 4×2 range, with only the single cab SX being offered with a 6-speed manual, while the rest are mated with the 6-speed auto. 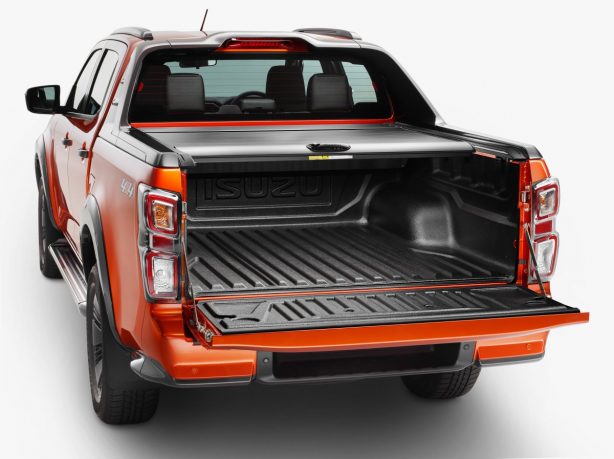 The 2021 D-Max is larger than before, too, with a 30mm longer wheelbase (now 3,125mm) and deeper rear tray although the ute’s overall length has reduced by 15mm. Elsewhere, it is 20mm wider but 45mm lower compared to the old model.

Isuzu claims the new D-Max is also more aerodynamically efficient compared to the outgoing D-Max, too, while being the most rugged variant of the range, the D-Max X-Terrain boasts solid off-road credentials and benefit from a lighter one-piece aluminium tailshaft

On the styling front, the D-Max X-Terrain – like most of its peers – looks the part with chunky wheel arch extensions on all four corners, meaty sail plains, roof rails, a lofty ride height with 240mm of ground clearance and skid plate on the lower front bumper.

Its front end is also a little more aggressively styled than before, with a sizeable front grille sandwiched by a pair of Bi-LED headlights. The ute’s front indicators and fog lights are stacked on top of each other for a more modern look, too.

To make entry and exit to the elevated cabin easier, Isuzu has also thrown in some side steps along with A- and B-pillar mounted grab handles, which are all pretty handy. 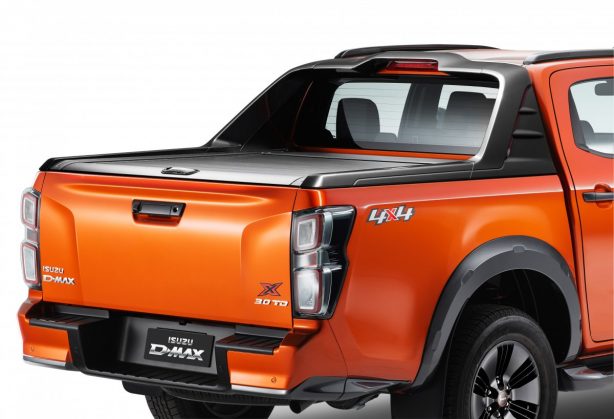 Around the back, there are LED taillights and a step that is cut into the rear bumper to make it easier to get up onto the ute tray.

Speaking of which, the X-Terrain comes with an easy to use roller shutter tonneau cover that slides neatly into its slot behind the cab with a push of a button to reveal a cargo space with 1,570mm of load length, and 1,530mm of load width. The latter narrows to 1,122mm between the wheel arches.

However, there are no power outlets at the back and the heavy tailgate doesn’t come with spring load but the tray itself does come lined with a robust tub and hooks to fasten your cargo securely.

Inside, the latest D-Max is a big step up from the old model with a new contemporary dashboard that blends robustness with premium feel. There are soft-touch materials with fake stitching (top of the dash), lashing of silver and piano black treatments, leather-accented upholstery and black roof lining. 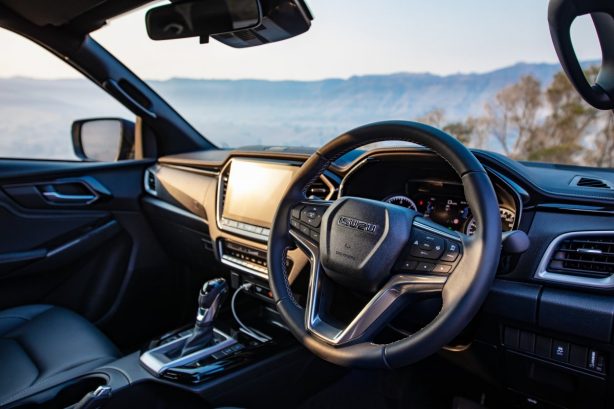 The centerpiece of the updated interior is the new 9.0-inch touchscreen infotainment system featuring voice recognition, in-built Sat-Nav, digital radio, and wireless Apple CarPlay (sorry Android Auto users, you’ll still need to bring your cable); the latter a first for the segment. The system is connected to a decent 8-speaker sound system with ‘Live Surround Sound’.

Being the range-topper, the X-Terrain also brings the welcome addition of Smart Keyless Entry with push button start, walk away door locking where, as the name suggests, the ute will lock itself automatically once the smart key is over 3m away, dual-zone climate control, remote engine start, front and rear parking sensors, and reverse camera.

On the safety front, the 5-star ANCAP rated D-Max is the first ute and one of only a small handful of vehicles to offer a centre airbag across the entire range. Embedded within the inner-side of the driver’s seat, the centre airbag is designed to inflate during side impacts to protect both front occupants from colliding with each other. 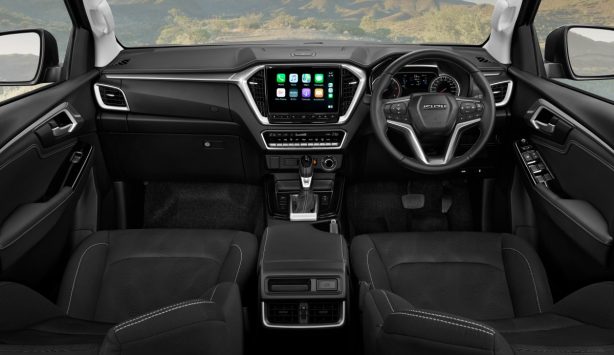 This is in addition to the usual front, side, curtain and driver’s knee airbags that come standard.

It’s worth noting that the D-Max’s AEB comes with a semi-autonomous steering function that when engaged, will steer the car between the lanes and around mild corners. It isn’t fool proof and we sometimes catch up coming out of its lane, so it’s best to keep one’s eyes on the road and hands on the steering.

Being a workhorse, the D-Max comes with a towing capacity of up to 3,500kg and the safety of Trailer Sway Control, which intervenes if trailer sway is detected to bring the trailer back under control.

In terms of practicality, there is plenty of storage dotted around the cabin, including hidden compartments under the rear seats, bottle holders on all doors plus two more retractable ones in front of the air vents, two glove boxes (although the bottom one is relatively small and doesn’t have much space with the owner’s manual residing in there) and an additional dash top storage bin.

There’s a USB port upfront, along with a power outlet under the dash. The D-Max does not have wireless phone charger. 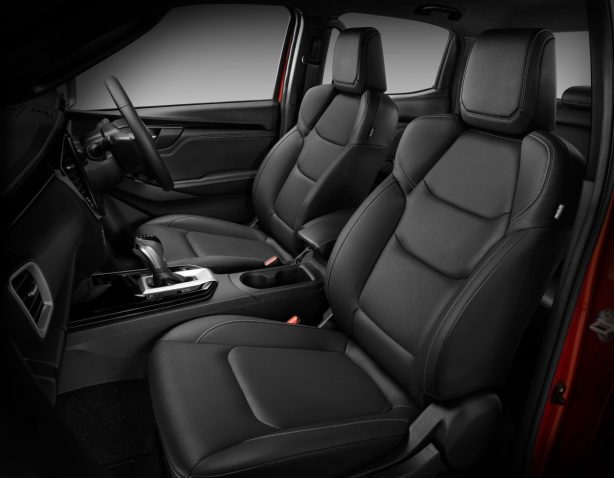 Up front, the seats are nicely bolstered and comfortable, while the rear seats suffer from the same issue as most other utes where the backrests are more upright than desired due to the design of the cab. There are ISOFIX points for child seats as well as two top tethers.

Leg and headroom at the back are decent, while rear occupants also benefit from a set of rear air vents and one USB outlet.

On the road, there is good punch from the 3.0-litre turbo-diesel engine even though its 450Nm of torque is down on rivals such as the Hilux and Ranger; both of which pumps out 500Nm. The 6-speed auto is smooth and willing, which is what you want in a call like this.

Official fuel economy is rated at 8.0L/100km, while our on test consumption was around 9.5L/100km with lots of pottering around town and country B-roads.

In front of the driver is a 4.2-inch colour multi-information display that shows the trip computer, digital speedo, speed sign, navigation, music and four-wheel drive information.

Ride comfort around town is pretty decent, too, with the D-Max X-Terrain soaking up bumps and ruts beautifully without the typical unladen rear end movements.

Isuzu has ditched the previous-generation’s hydraulically assisted steering rack, to an electrically assisted one in the 2021 model. It’s a fairly light set up that is great for parking but lacks the meaty feel out on the open road. Its substantial turning circle might also make you think twice about doing a U-turn on a busy main road.

While we did not do a full off-road test, the D-Max X-Terrain does come with proper off-road gear, including dual-range Terrain Command 4×4 with rear diff-lock, hill descent control and 800mm of wading depth, which is right up there with the best in the segment.

The new 2021 Isuzu D-Max is one of the most advanced utes on the market with impressive safety and technology that puts some cars to shame. Coupled with its off-road gear, up-to-date comfort and convenience and renowned reliability, the D-Max, in our opinion, is the best in its burgeoning segment.