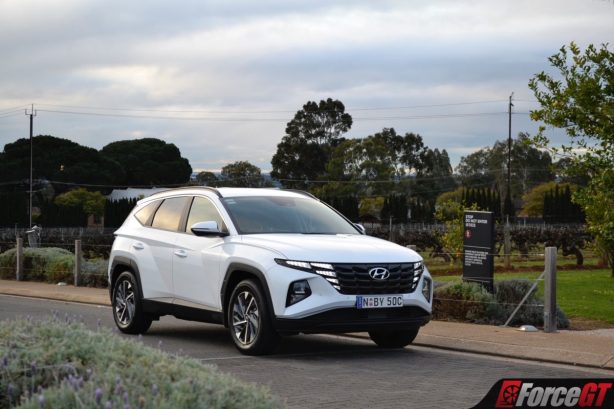 Hyundai says the all-new 2021 Tucson debuts the first application of the company’s ‘Sensuous Sportiness’ design language on an SUV for a “futuristic image”. It isn’t wrong.

In an amazingly saturated segment of the market that is the mid-sized SUV, the Tucson stands out. While styling is subjective, there’s no arguing its Parametric Hidden Lights is as unique as a giraffe with a short neck.

Still, arresting styling alone doesn’t tell the whole story as the new Tucson has a high-tech interior to match and accomplished dynamics to boot.

So, let’s take a close look to see if the Tucson has moved the segment forward. 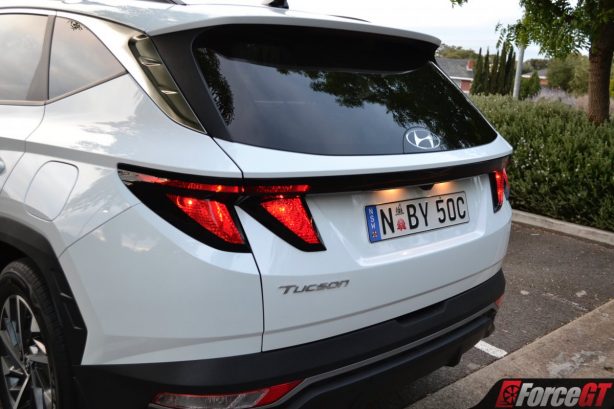 We have to give Hyundai’s design team where credit is due, for the new Tucson’s is daring with a huge cascading grille that reminds us a bit of the Mercedes-Benz EQC’s front. Embedded in each corner of the grille are LED daytime running lights that blend in nicely when they are off.

Around the rear, the broad taillight treatment is complemented by a new glass-type Hyundai emblem on the rear windscreen, with the rear wiper hidden underneath the rear spoiler for a cleaner look.

Bringing both front and back together are bold side character lines featuring a Z-shaped graphic which is said to give the Tucson a dynamic and aggressive appearance. Our mid-range Elite here rolls on relatively stylish 18-inch alloy wheels.

If the exterior of the new Hyundai Tucson is a little polarising, the interior isn’t as controversial, but that’s a good thing. Otherwise, the climate controls would be hidden behind layers of digital menus. 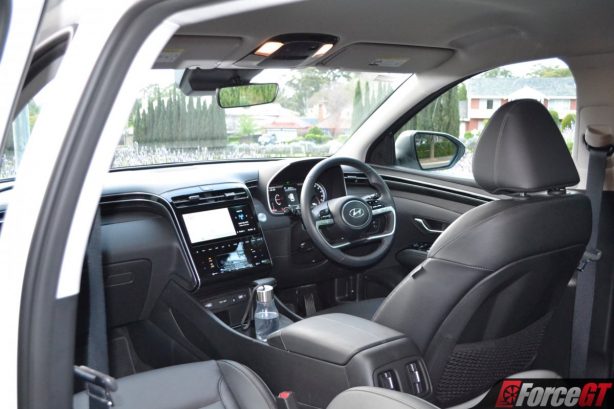 No such problem here. And while we appreciate the physical buttons on the gloss black dual-zone climate control panel, the touch-capacitive buttons are flushed to the panel and still require taking your eyes off the road momentarily to adjust the temperature.

Still, we love the wonderful wrap around dashboard with ‘waterfall’ centre stack and large 10.25-inch touchscreen system with integrated sat-nav that is sharp and bright. The system is a marked improvement from the old car’s and is almost as responsive as your smartphone. Speaking of which, Apple CarPlay and Android Auto both comes standard, too, if you prefer to mirror your smartphone.

Strangely, wireless CarPlay and Android Auto are only available on the entry-level Tucson which comes with an 8.0-inch display, and not on the Elite and Highlander.

Also not as useful is the ambient noise feature. Should you be tired of your music or the digital radio or a podcast, you have a choice of a roaring fire, a hustling jungle, boots crunching through fresh snow or a busy café. 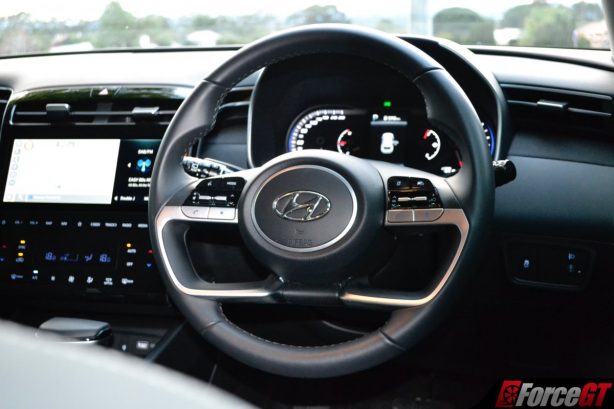 The driver is greeted by a quirky four-spoke steering that is deceivingly good to hold and comes with reach and rake adjustment. Its leather is nice and soft, too.

Sadly, the Elite misses out on the Highlander’s excellent 10.25-inch digital instrument cluster, instead making do with a pair of counter swing conventional dials along with a smallish 4.2-inch supervision cluster in the middle.

Back to the good news, the Elite comes with a conventional gear shift lever instead of the Highlander’s fiddly push button shift-by-wire system. There are also plenty of cubby holes to swallow the entire family’s various devices, including a large bin under the front central armrest, storage tray under the transmission and bottle holders on all four doors.

Overall, Hyundai has again outdone itself with the Tucson’s ambience and perceived quality. They are not only much better than its predecessor, but also surpasses some of the best in class. All touch points are padded and feel good to the touch and solid, while the seats (electric fronts) are comfortable and supportive.

The infotainment system is a cinch to use, with easy to navigate menus and logically layout user interface.

How roomy is the new Tucson? 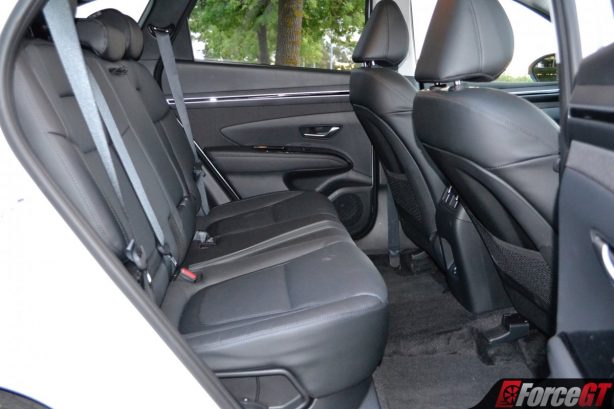 The Tucson is longer and wider than ever before, with the rear passengers benefitting from an extra 26mm of extra legroom compared to its predecessor. Headroom is decent all round, too.

The rear seats can comfortably accommodate two full-sized adults, while a 3rd smaller adult will fit nice in the middle.

Parents will find the outboard ISOFIX mounts and top tether points useful, and there’s a fold-down centre armrest with cupholders in the middle. Rear seat passengers also get air vents along with two USB-A charging points. 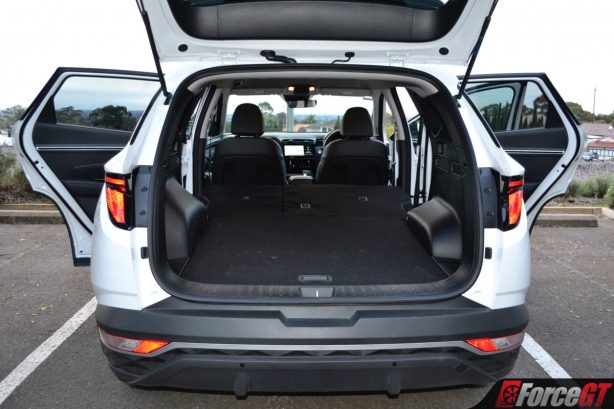 The Tucson’s bigger dimension also means a larger boot at the back, measuring a healthy 539L with the rear seats up and a massive 1860L when folded.

A rarity these days, there’s a full-size alloy spare wheel hidden under the boot floor.

How safe is the Tucson? 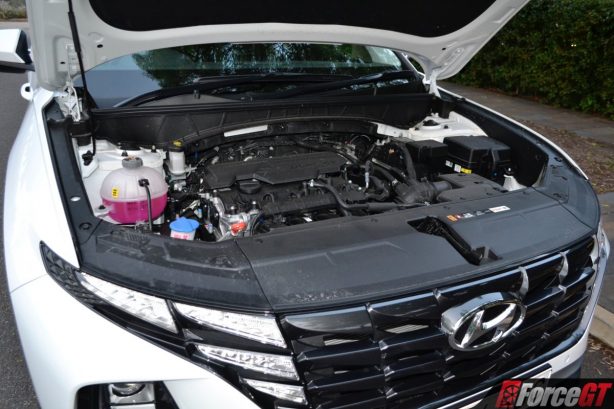 Despite the all-new sheet metal and platform, the Tucson carries over its powertrains from the previous generation, albeit updated with some new technologies to improve efficiency and performance.

The 2.0-litre MPi naturally-aspirated four-cylinder petrol produces 115kW at 6,200rpm and 192Nm of torque at 4,500rpm and is connected to a six-speed automatic transmission that drives the front wheels. Hyundai no longer offers manual transmissions with the Tucson.

The updated unit comes with a new electronically-controlled continuously variable oil pump, which is said to improve fuel efficiency, as well as a move to multi-point injection from the old unit’s direct injection.

Hyundai claims it will return 8.1L/100km on the combined cycle but real world testing revealed it’s closer to 8.9L/100km with roughly 80 per cent city commute and B-roads drives.

While 115kW and 192Nm might sound meagre, the reality is quite different. You never really feel under powered in the Tucson in most situations and the six-speed auto does a relatively good job of getting you into the power band quickly. It won’t win a street race but for most buyers who will most likely be pottering around the suburbs and doing school runs, it’s entirely adequate.

However, for those who likes to take the winding road home, there will be moments where you wish it had a bit more shove. It’s a similar story when you have a full load.

One interesting thing about the engine is that it drives better in Eco mode! That’s because in Normal mode, tip in is just a little too aggressive, making a smooth take off a bit of a challenge, especially in the wet. 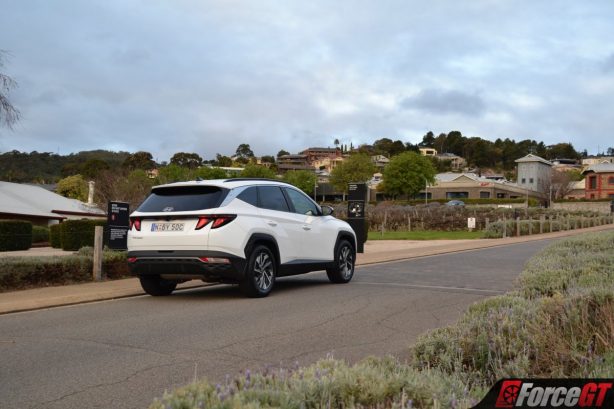 Engine and cabin refinement are also good with engine noise kept at bay and little road or wind noise intruding into the cabin.

Back in town, the Tucson’s ride is on the firmer side but you never feel as though one of your vertebrates have popped out at the end of the journey. Unlike most of Hyundai’s wider range which has received bespoke Australian suspension tune, the 2021 Tucson features a global tune albeit with significant local input.

While it’s no i30 N sharp, its direct turn-in and accurate steering is confidence inspiring around the bends.

All round visibility is good and aided by a rear-view camera and front and rear parking sensors.

Most of the car’s active driving aids work as intended and are relatively non-intrusive. The only gripe being the adaptive cruise control has a tendency of leaving a very small gap with the car in front when stopped at traffic.

Like every model within Hyundai’s local range, the Tucson is covered by the company’s five-year, unlimited kilometre warranty with lifetime capped price servicing.

Service interval is every 12 months or 15,000km, whichever occurs first with each service costing $319 for the first five years.

The 2021 Hyundai Tucson ticks all the right boxes as a family SUV – it’s practical, affordable to buy and run, feature packed, comfortable and safe. Has it moved the segment forward, not in terms of technology or drivetrain, despite the Tucson’s “Imagine tomorrow’s car today”.

Tagline aside, the new Tucson is comfortable and drives well. It also has one of the best infotainment systems in the segment that is jam packed with technology. It should be on your short list if you’re in the market for a mid-size SUV.

The Staria is Hyundai’s new people mover, replacing the previous iMax. The new name is …