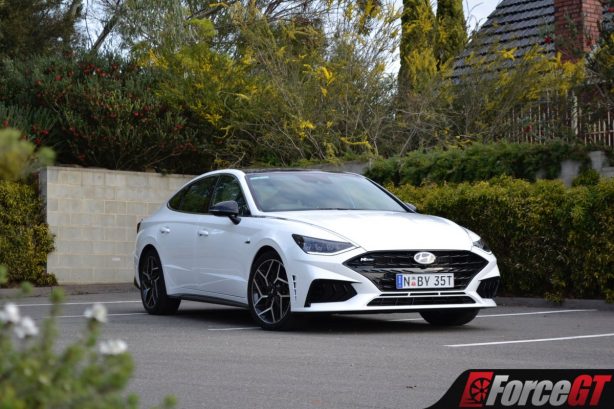 While there’s no arguing the midsized sedan is an endangered species at risk of disappearing in the next decade or so, two standout specimens are still clinging on to life with encouraging numbers.

The Toyota Camry and Mazda6 can both be sighted out in the wild in decent numbers, with promising signs that the segment is not completely dead, yet. And now, Hyundai is doing its part in conserving what was once the dominant species in the automotive landscape with the latest generation 2021 Sonata.

The Hyundai Sonata has been a mainstay in Australia for nearly 25 years stretching back seven-generations, but in order to survive in the harsh climate, for the eighth-generation the company has brought in only the range-topping, sports-infused, Sonata N Line to Australia.

Unlike its conservatively styled forebears, the new Sonata is anything but dull, carrying a daring and rather flamboyant design tasked with pushing the once humble mainstream sedan into the small contingent of so-called ‘semi-premiums’, populated by the likes of Volkswagen Passat R-Line and Mazda6 Atenza. 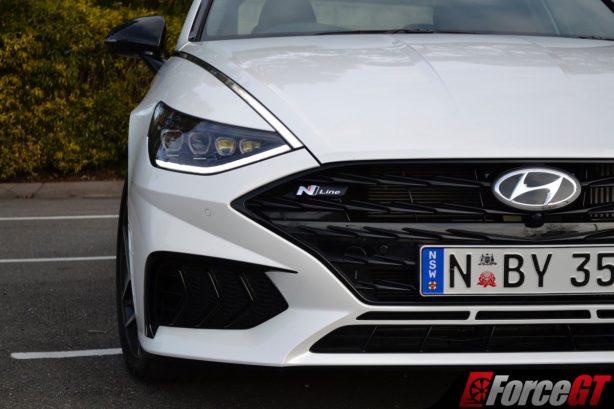 The sole model in Australia, the fully-loaded Sonata N Line carries a price tag of $50,990 before on-road costs with the only option being the $595 metallic or Mica paint, although our tester’s White Cream Mica is a no cost option.

At the premium end of the market, the Audi A4 35 TFSI opens at $55,900. And while it carries a more desirable badge, you will get a lot less standard equipment compared to the Sonata. 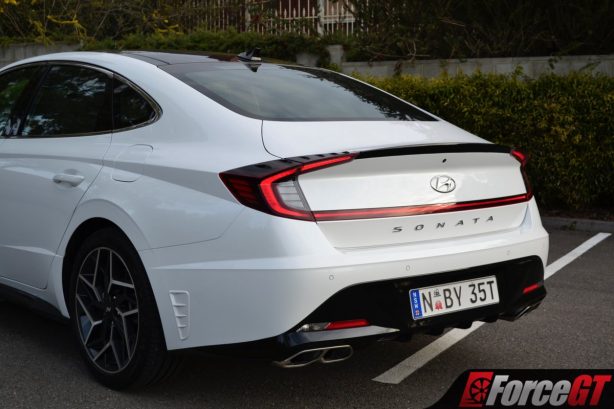 Inside, the wonderfully modern cabin features suede and soft Nappa leather seating, with cooling up front and heating on all outboard positions, while the driver also gets 12-way electric seat adjustment with 2-position memory.

Straight ahead, there’s a sharp 12.3-inch digital instrument cluster and crisp head-up display with a myriad of information projected onto the windscreen, including speed limits, sat-nav directions and blind-spot monitoring.

The sound system is also used for the car’s Active Sounds Design which enhances engine note and cancels unwanted noise. 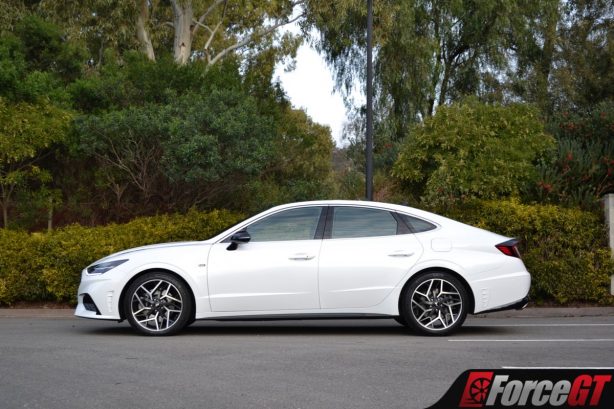 The eighth-generation Sonata is longer and lower than the superseded model, measuring 4.9m in length and 1.45m in height.

Its unconventional styling continues up front, where the upswept LED daytime running lights stretch almost halfway up the bonnet crease to join the chrome strips that link up to the side windows.

Together with a prominent Hyundai grille and gaping N Line air intakes, the Sonata certainly looks great and standout – both during the day and at night. 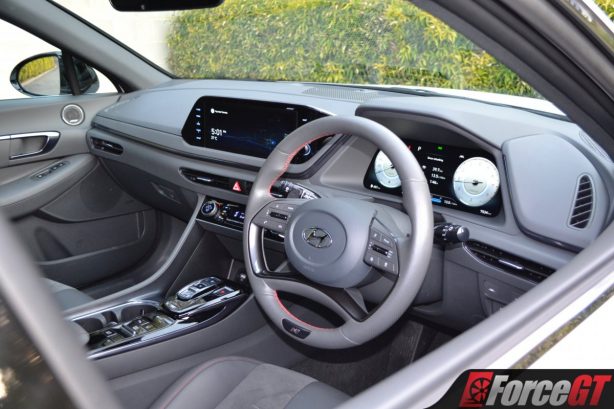 If the exterior styling is a little out there, it’s a bit more restraint inside though no less adventurous.

Like lots of modern cars, the giant infotainment screen dominates the fresh, low-rise dashboard with slimline air vents. It’s also good to see Hyundai has resisted the urge to banish all knobs and buttons known to men in the name of design and simplicity, especially those for the climate control.

Cabin materials are generally up there with Volkswagen and Mazda, too, although the centre console wouldn’t go astray with a padded driver’s knee pad.

Most touch points are nicely textured and soft to the touch except for some hard plastic around on the lower part of the centre console. What we like however, is the piano black trim on the centre console which reduces glare under the harsh Australian sun as opposed to chrome material increasingly favoured by car manufacturers. 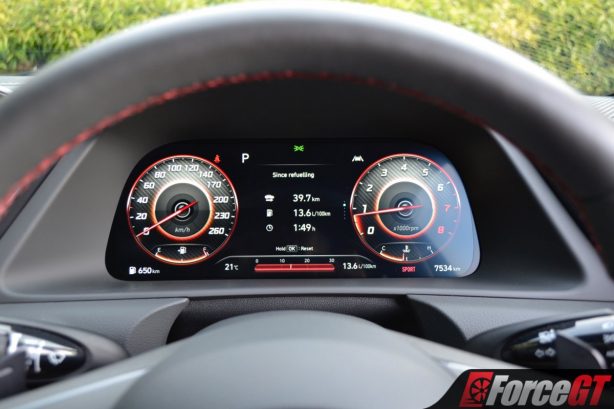 The digital instrument is classy and wonderfully crisp with a variety of skins that changes with the drive modes. Mind, it isn’t as customisable as the Volkswagen’s but it’s arguably one of the best on a mainstream car.

The N-branded genuine suede/Nappa leather covered sports seats are both great to look at and comfortable to sit in. They are 12-way adjustable on the driver’s side and come with Volvo-inspired adjustment graphics on the infotainment screen.

Rear seat accommodation is equally good with ample legroom topped by an airy ambience enhanced by the large, gaping sunroof. However, taller rear seat passengers might find the plunging roofline eating into their headroom. The pronounced centre hump also means the middle seat passenger will be sitting legs splayed.

The rear retractable side window blinds are a nice touch to keep the sun, too. 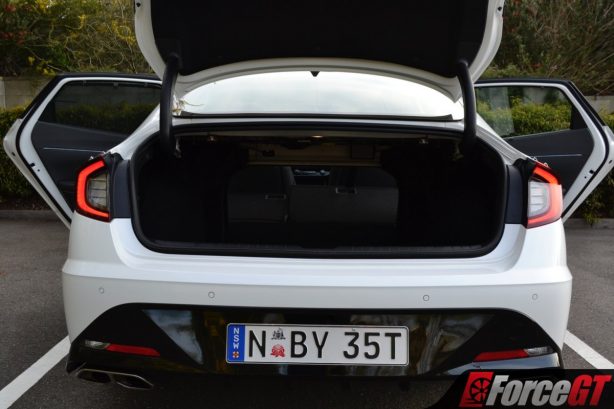 Elsewhere, there are bottle holders on all four doors, along with two cupholders up front, while the handsfree bootlid opens to reveal an enormous 510 litres of boot space that can be further expanded via the 40:60 split-fold rear seats.

What lets the interior down slightly is the shift-by-wire transmission buttons which is less intuitive to use than a normal P-R-N-D selector, especially when performing a 3-point turn. For an aspiring premium model, ambient LED lighting are also curiously missing.

How safe is the Sonata N-Line?

In addition to the six airbags, the 2021 Sonata features Hyundai’s comprehensive suite of SmartSense technologies that includes: 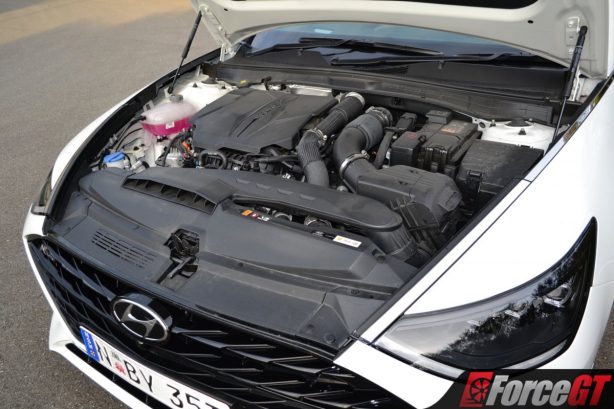 The 2021 Sonata is the first Hyundai model to feature the brand’s all-new 2.5-litre turbocharged four-cylinder petrol.

According to Hyundai, the Smartstream petrol features a number of clever technologies to improve engine performance and reduce emissions (it’s Euro 5 compliant) as well as fuel consumption. These include:

The engine is married to a ‘wet’ eight-speed dual-clutch transmission rather than the dry-clutch set-up in smaller N Line models. Hyundai says one of the reasons for this is the wet system’s higher torque rating, as well as its more refine shift calibration.

How does the Sonata N Line drive?

While it might be sports-infused with some verve from the N division, the Sonata isn’t an all-out sports sedan but rather a very competent GT cruiser.

The engine is muscular off the mark and responsive enough to not have to constantly hunt the redline. There’s always plenty in reserve for overtaking or a quick dash into a gap in the traffic.

There’s even launch control for those who want to test the Sonata’s not too shabby 0-100km/h claim of 6.2 seconds, as well as paddle shifters for the eight-speed dual-clutch gearbox.

Drivers can also choose from four different Drive Modes, including Normal, Sport, Sport+ and Custom, the latter which allows you to further customise the engine and transmission characteristics to suit your taste. 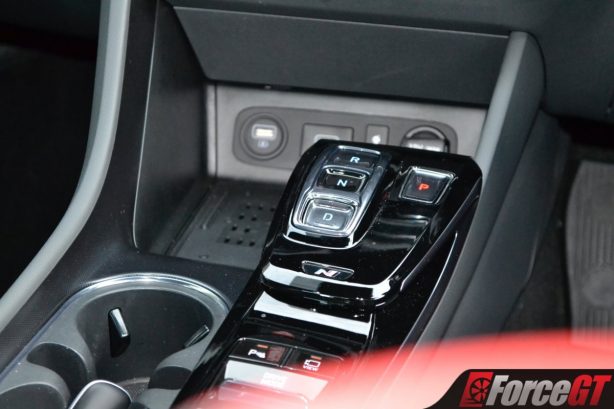 In Sport+, the transmission will rev-match on downshifts for that extra dose of sportiness and driver engagement, too. However, regardless of which mode you’re in, the transmission is well calibrated to take advantage of the chubby torque curve on offer.

In fact, you’d rarely find the need to slip into Sport+ as the drivetrain is so beautifully responsive and kick-down without much coercion with a quick dab of the throttle.

However, sending 420Nm of torque to just the front wheels can occasionally overwhelm the front 245mm Contis, especially in the wet. It’s a pity it’s not available with all-wheel drive.

Ride quality is on the firm side but it’s by no means uncomfortable. The trade of is the Sonata feels sure footed around the bends and is capable of carrying decent speeds through corners.

We also like the Active Sound Design which injects a bit of aural drama to the proceedings while also doing its bit to cancel out undesirable noises when cruising along on a freeway or urban road.

On the safety front, the driving assistance system generally works well, with special mention for the Adaptive Cruise Control system which deals well with turning vehicles without the hard braking of some other makes. It’s self-steering system is also not as intrusive as earlier iterations of the system.

The Sonata officially consumes 8.1L/100km of 91RON but over our weeklong test, the trip computer shows a reading of 9.6L/100km on a mix of city, freeway and country road dash and without engine stop/start tech.

The Sonata needs a visit to the dealer every 12 months or 10,000km, with each visit capped at $350 each for the first five visits.

The 2021 Hyundai Sonata N Line is a good example of each generation being better than the one before. It’s better looking, has a more powerful engine and is generously equipped. While Hyundai doesn’t expect the Sonata to sell in high numbers, we feel it certainly has what it takes to eke out a decent following for those looking for a good-looking, decently built and well-equipped GT.