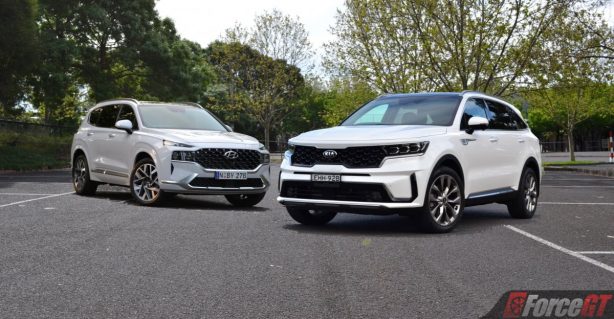 The seven-seater SUV is not just the ultimate definition of a modern family car, it is – arguably – the definition of a car. Not only is it tasked with the huge responsibility of hauling the family safely from A to B, but it also needs to offer plenty of space, have the latest technology, look stylish and drive well. It is a car for everyone, all occasions, and all conditions.

If you have been watching this space for a while, you would have noticed two standout performers, not exactly for their merits, but for their tremendous improvement and advancement over the years. The Hyundai Santa Fe and Kia Sorento started out as lowly, budget alternatives to more established nameplates like the Toyota Kluger and Nissan Pathfinder. But in the space of just two decades, the Korean pair have transformed and are now head and shoulders with their Japanese counterparts, both in terms of product and pricing.

So, if you think it is time you move on to one of these, you will be asking which is the better SUV? We have gathered the Santa Fe and Sorento to answer just that. 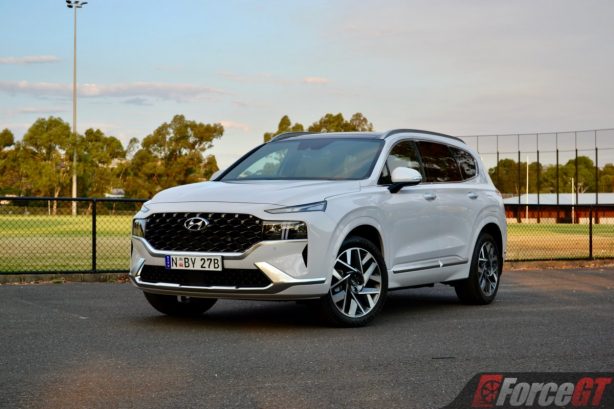 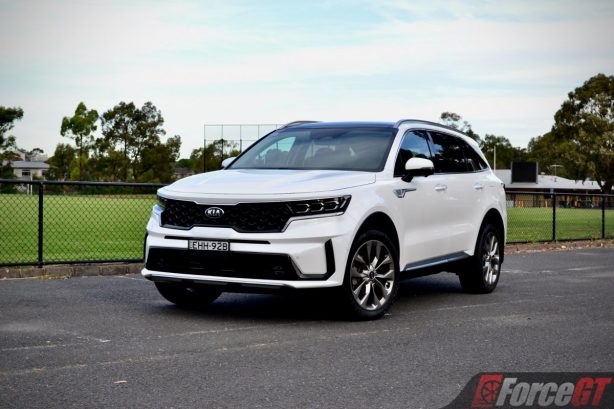 The all-new fourth-generation Kia Sorento is newer than its rival, having just arrived in late 2020. The pecking order mimics that of the Santa Fe, with four available grades and each offered with either front-wheel drive petrol or all-wheel drive diesel. The prices are similar as well, with the range kicking off at $45,850 and stretching to $63,070 before on-road costs. For a fair comparison, we tested the $63,070 top-spec GT-Line all-wheel drive diesel model.

One thing to note is that both the Santa Fe and Sorento are based on the same platform and share the same drivetrains. This is because both Hyundai and Kia are owned by Hyundai Group. 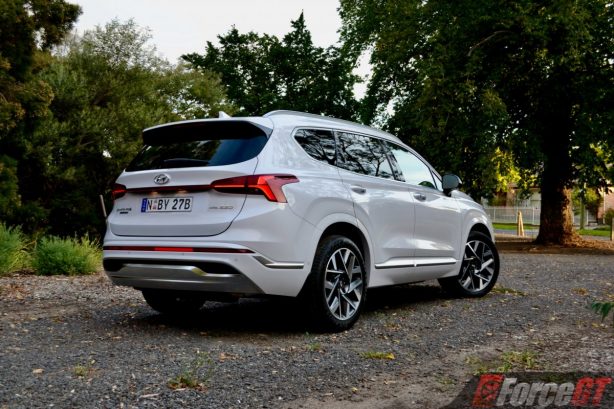 The fourth-gen Santa Fe has always looked the part. Its elegant lines and classy touches give it an upmarket look, while the split headlights and large grille lend it plenty of road presence. The proportions are spot on, too.

The update sees the Santa Fe getting a fresh new front fascia with wider grille that extends out to the headlamps and a revised bumper. The rear gets restyled taillights and bumper. Upper spec models like the Highlander have colour coded lower bumper and wheel arch cladding, adding to its premium look. 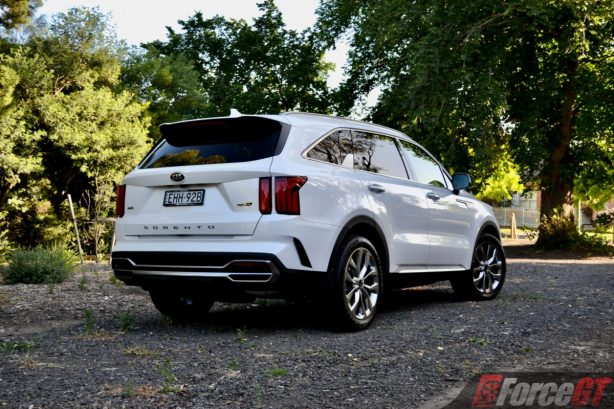 Compared to its rival, the new Sorento has taken on a sportier and more rugged approach to styling. The design is edgy and contemporary, with a sophisticated undertone. In fact, the latest Sorento is quite a design triumph. It is arguably one of the sharpest looking SUV in the segment.

The Sorento is some 40mm longer and 10mm lower than the Santa Fe, and so it looks sleeker and less upright than its counterpart.

In range-topping guise, both SUVs are equipped with full LED exterior lighting and rolls on 20-inch alloy wheels.

The Santa Fe’s interior has largely remained the same as before, with the biggest updates being the new 10.25-inch widescreen infotainment touchscreen display on the dashboard, and the 12.3-inch full LCD instrument cluster. The centre console has also been revised, with the raised design mimicking that of its bigger brother, the Palisade. The steering wheel is also new, so are the door switches.

In line with the updated exterior, the new Santa Fe cabin feels plusher than before, with improved materials and greater warmth. And yet, the Sorento managed to do better. 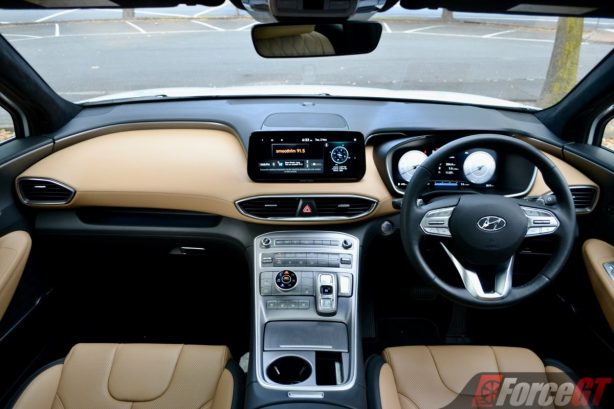 Kia has not only nailed the new exterior, but the interior, too. The new dashboard is modern yet functional, with more glamour and richer details than that in the Hyundai. The high gloss piano black trimming looks expensive, contrasted perfectly with polished aluminium-look inserts throughout. The dual-channelling air-con vents are clever yet pretty. Even the 12.3-inch digital instrumentation that uses the same hardware as that in the Santa Fe has a much better gauge and graphic design. The silver-themed gauges used in the Hyundai just look too bright at night, and there is no option for night mode. 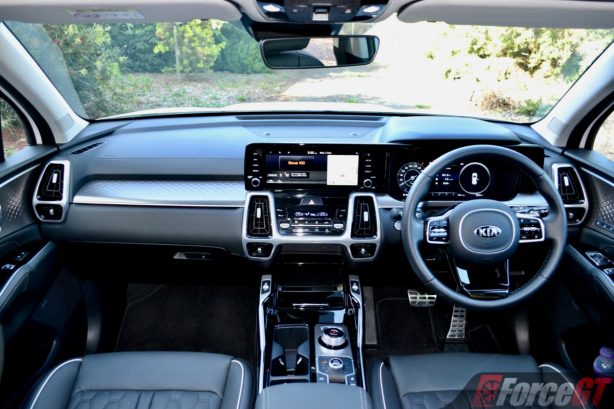 The Sorento also shares its 10.25-inch centre touchscreen with the Santa Fe and both systems have very similar interfaces and menu structure. With support for smartphone-like swipe and pinch gestures, they are both easy to navigate around, though some on-screen buttons are too small and the far left of the screen can be a bit of a stretch for shorter drivers. Apple CarPlay and Android Auto are supported, but they do not work wirelessly (yet). Mobile phone wireless charging pad and head-up display are also fitted to both vehicles. 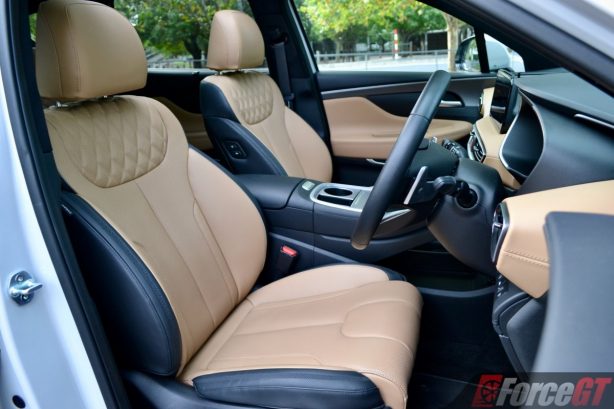 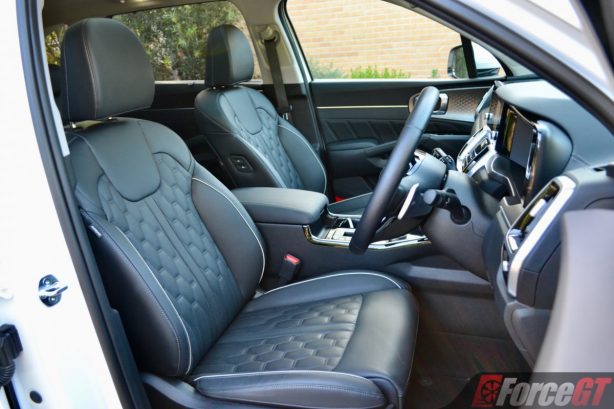 The quilted leather seats in both SUVs look amazing, but it is those in the Hyundai that deliver greater comfort levels thanks to better contour and slightly softer headrests. Passenger space is generous in both cars, with similar legroom and headroom on offer. What is different is in the boot, where the longer dimension of the Sorento affords 57 litres more cargo space than the Santa Fe with all three rows of seats up, at 187 litres versus 130 litres. With the third row folded, the Kia has a 99-litre advantage, at 616 litres against the Hyundai’s 517 litres. The space can be further expanded in both SUVs by tumbling the second-row seats.

Powering both the all-wheel drive variants of the Santa Fe Highlander and Sorento GT-Line is the 2.2-litre four-cylinder turbo diesel engine that produces 148kW at 3800rpm and 440Nm at 1750-2750rpm. Drive is channelled to all four wheels via an 8-speed dual-clutch automatic transmission. 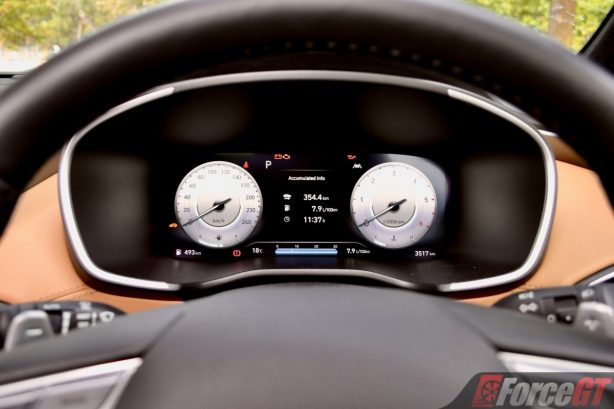 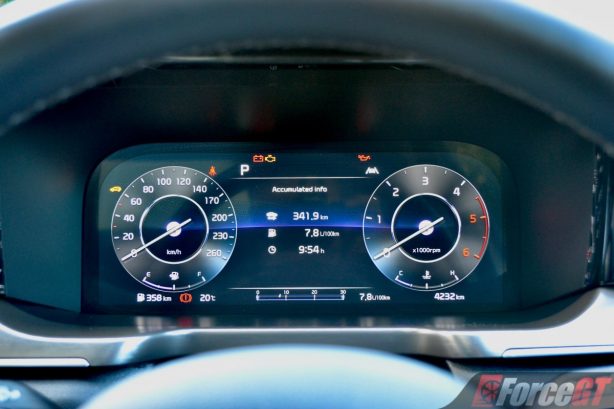 This diesel engine has been around for a while now, but progressive updates over the years have improved its response, refinement and quietness. On idle and when cruising, the oil burner is muted and there is barely a hint of clatter in the cabin. It only starts to get vocal when revs are piled.

But with that much torque low down in the rev range, there is hardly ever a need to work this thing, except when overtaking. The 8-speed DCT ensures quick gear changes with minimal power loss, further aiding power delivery of the strong diesel engine. And unlike some twin clutch boxes, the Hyundai/Kia wet friction DCT is generally smooth around slow-moving traffic, with no noticeable hesitation in first gear roll off. The ratios are well spaced to harvest the most out of the torquey diesel mill, too.

There is no denying the sheer size of both vehicles on the road as both weigh in near two tonnes. However, it is not as noticeable as you would expect. Both SUVs feel a lot smaller to drive thanks to tight body control delivering composed handling. The Sorento does feel a tad flatter around the bends due to the firmer suspension set up. 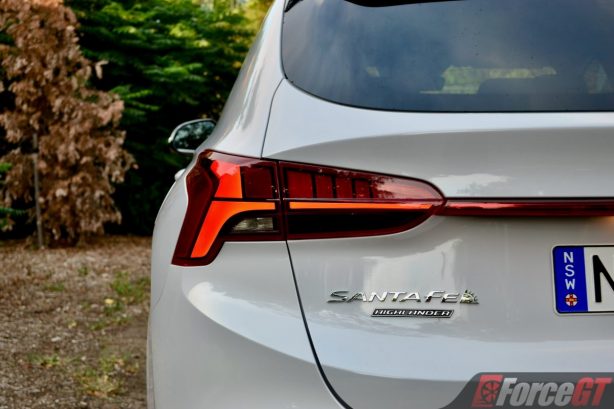 But that tauter underpinnings also deliver a slightly firmer ride in the Sorento, with it not settling as well as the Santa Fe over high frequency bumps. When the roads are smooth and straight though, the Sorento does feel like the mildly more stable cruiser thanks to its longer wheelbase which creates more distance between the front and rear axles. However, road noise is a bit better suppressed in the Santa Fe.

That all said, both SUVs will meet families’ expectation in comfort and day-to-day drivability.

The Santa Fe comes with the standard warranty of 5 years, while the Sorento goes one up by stretching the warranty period to 7 years. Both warranty plans have no cap on kilometres. 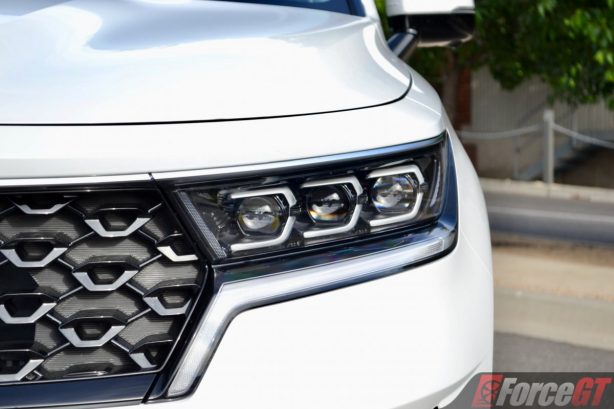 Both cars are offered with capped price servicing, with the Santa Fe capped at $419 per service for the first 5 years or 75,000km, and the Sorento asking $474 for each dealer visit for the first 7 years or 105,000km. This makes the Hyundai the cheaper car to maintain in the long term, despite its shorter warranty period.

In terms of average fuel economy, both SUVs have identical rating at 6.1L/100km (due to identical powertrains). Not only that, but their real-world tested average is also exactly the same at 8.0L/100km. This makes the diesel-powered Santa Fe and Sorento two of the most efficient large SUVs in class.

From humble beginnings, the Hyundai Santa Fe and Kia Sorento have grown to become two of the most competent family SUVs in class. Both vehicles are well-made, luxuriously appointed and comprehensively equipped seven-seater crossovers.

Which one should you buy? That all comes down to the ‘flavour’ you are looking for in a SUV.

The Santa Fe is the slightly softer and plusher model, while the Sorento is the sportier and more contemporary alternative. The latter also has a larger boot.

Acknowledging the Santa Fe’s superior comfort, the interior of the Sorento has really done it for us. It looks great and feels sophisticated. We also like the overall styling of the Sorento more. Plus, it has a long warranty period of 7 years, 2 years more than what is offered by the Santa Fe. And for that – and by just a whisker – the Sorento takes the crown in this comparison review.