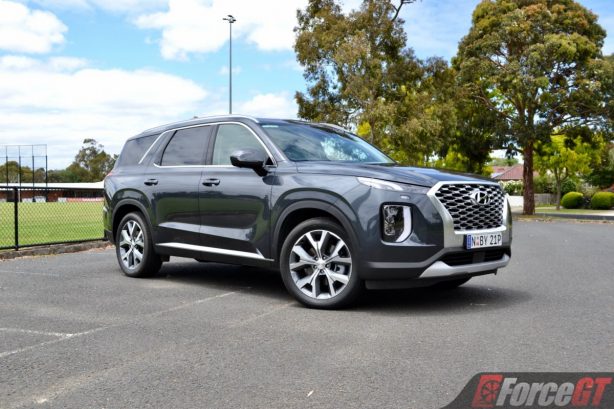 With the Australian summer in full swing, there’s no better day trip than hitting the coast for some beach time. And with a brand-new Hyundai Palisade parked on the driveway, having just been delivered the week before, there’s no need for further justification.

A seven-seater SUV is pretty good for this kind of stuff, but the Palisade is especially good because it is one of the boldest, biggest and plushest three-row crossovers currently on the market – plus it has one extra seat to make it an eight-seater. For those not so fond of driving an MPV a.k.a. people mover, there’s now an alternative. 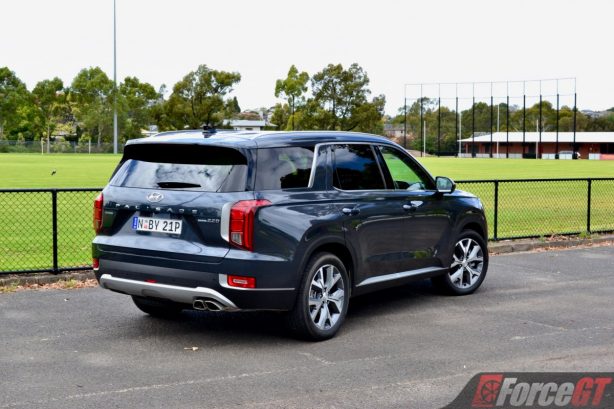 Rivalling the likes of Mazda CX-9, Nissan Pathfinder, Toyota Kluger and Volkswagen Touareg, the new Hyundai flagship SUV is priced from $60,000 before on-road costs, quite a bit more than its Japanese rivals and undercutting only the German car. Our range-topping Palisade Highlander checks in at a steep $75,000 plus ORCs, playing dangerously close to premium offerings like the Lexus RX.

Nevertheless, with beach gear packed, tank filled and pressure checked, we pointed the Palisade to the Bass Coast in Victoria’s Gippsland region. This south-eastern part of Victoria is home to some of the state’s most pristine and longest coast lines, with a hive of water activities taking place in the summer months. 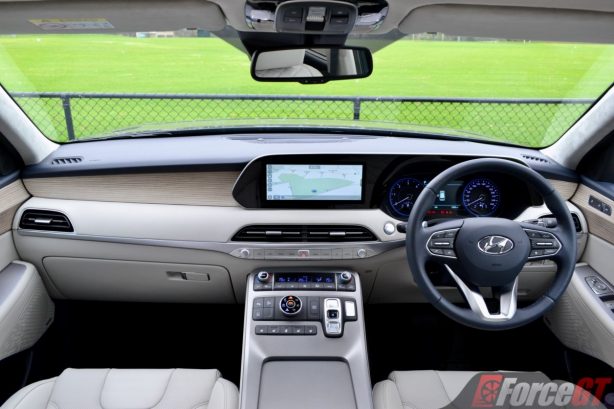 From our home base in Melbourne, the drive covers over two hundred kilometres of varying roads, taking us through the breathtakingly beautiful rolling hills of Gippsland before descending to the coast. But first, we had to get out of the city, which means slogging through Melbourne’s notorious urban traffic. Measuring nearly five metres long and two metres wide, the Palisade takes up a chunk of real estate on the streets. This is a vehicle where you’d want to stick to the main arterial roads for as long as possible, narrow streets are not its thing. But nothing is worse than trying to manoeuvre it through tight drive-throughs for a takeaway cuppa (or a Happy Meal for the kids).

That said, a host of driving aids are at your disposal to make navigating through the urban jungle a whole lot easier. Our Palisade Highlander grade is equipped with Automatic Emergency Braking (forward and reverse), Lane Keep Assist, Rear Cross Traffic Alert, Blind Spot Monitoring and Adaptive Cruise Control, all of which worked well during our drive except for the Lane Keep Assist function which at times felt nervous and overly sensitive.

Taking the stress out of parking are the Parking Sensors, guided Rear View Camera and Surround View Monitor. And in case you were careless to not check before swinging open your door, Safe Exit Assist would warn you of any approaching vehicle or cyclist when you pull the door handle. 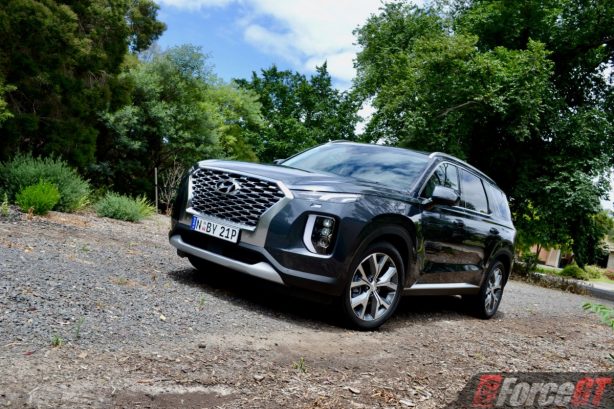 With the cup holders snugged with coffee cups and the Melbourne traffic behind us, we began to make good progress on the freeway. With hundred Ks an hour dialled into the cruise control, down south we went in a bed of comfort and supreme quietness. Yes, it’s a diesel operating under the bonnet, but you can barely hear it on cruise. There’s little road noise from underneath, too. The Palisade is truly in its element on the open road, doing what it’s designed to do – crunching the miles.

Also settled down considerably was the fuel use. While the average consumption hardly ever got down to below 10L/100km in the city, on the freeway it sat at around 6L/100km for the most part, which is pretty impressive for such a large SUV. 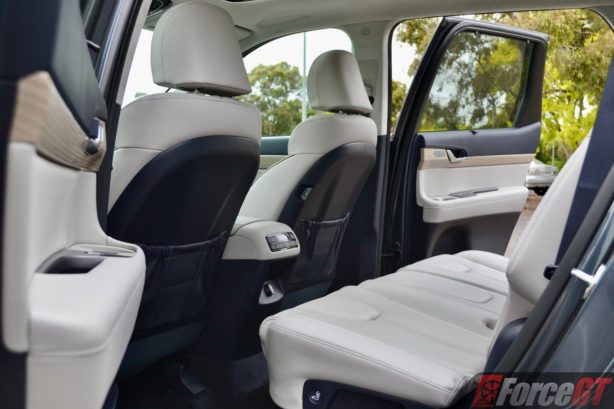 The cabin is vast, with plenty of head and legroom for everyone on board, including those seated in the third row. While it’s an 8-seater, the lack of shoulder room in the third row seats means they are not exactly adult friendly. Gaining access to the third row is as easy as pressing a button on the outboard second row seats, which will automatically tumble the seat backs and slide them forward, liberating a generous passageway to the rear.

Storage compartments are plenty around the cabin, with the rear doors offering not just one but two cup holders each. With three rows of seats deployed, there are still 311 litres of boot space left, and with them tumbled you get a voluminous 1,297 litres of cargo capacity. 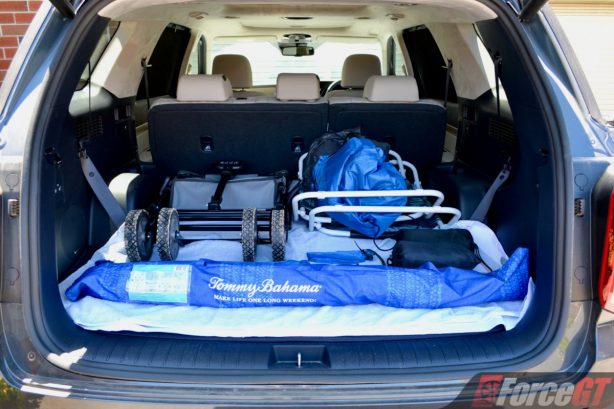 With it hustling along happily on the Monash Freeway, it’s time to play with some of the techs on offer. Apple CarPlay and Android Auto worked a treat, though cables are still required for now, with wireless slated to be introduced in the near future. The instrumentation is a conventional, non-full LCD type, which came as a bit of a disappointment for a top-spec model. Granted, they are clear and concise, with the 7-inch multi-information display nestled in the middle bringing up the so called ‘Blind Spot View Monitor’ every time the indicator is activated. Essentially, it’s a live view from the side rear facing cameras, which we don’t find to be any more useful than just relying on the blind spot monitor warning lights on the side mirrors.

The 10.25-inch infotainment display serves up crisp graphics and excellent touch response, but some on-screen buttons (especially on the map display) are too small to operate even while stationary, let alone in motion. There’s also the lack of address suggestions to speed up an address search.

Voice command is available, but it only operates Siri (Apple CarPlay) or Google Assistant (Android Auto) and not the Hyundai infotainment system itself, which means you can’t tell it to select the next radio station, for instance. 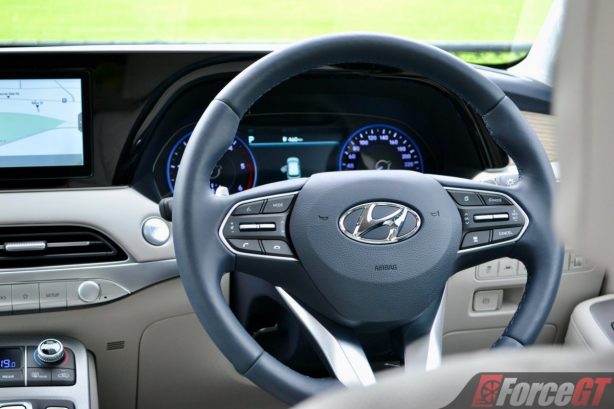 Being a range-topping model, the Palisade Highlander comes with all the creature comfort imaginable. All seats are leather wrapped, with the front seats heated and cooled. Heating is also fitted to the second row outboard seats and the steering wheel, while sunshades are equipped in the second row seat windows. There’s a sunroof up front and a larger moonroof in the rear. Elsewhere, the 12-speaker Infinity surround system is punchy but not the best in terms of clarity.

A swift exit from the M1 around Pakenham signalled the end of our freeway run, and after a similarly leisurely 30 kilometres on the South Gippsland Highway, a right turn took us into the sleepy township of Bena, where at the end of the town lies the start of some of the most scenic back roads in the Gippsland region.

As the road weaves through farmlands, the time has come to assess the Palisade’s handling. Despite tipping the scale at a hefty two tonne, the Palisade is surprisingly manageable around challenging roads. Being a tall vehicle, there’s no hiding its body roll, but control is still skilful and grip is excellent. If the steering weren’t as numb, the Palisade would really feel like a much smaller car to drive. 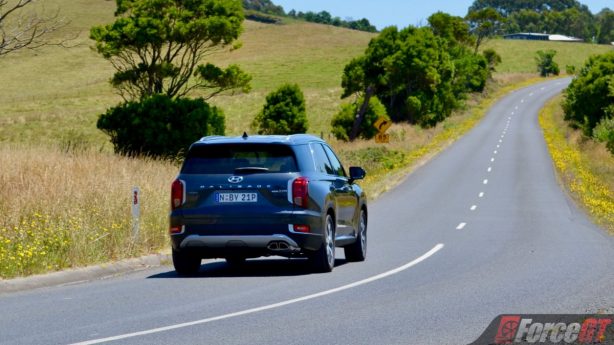 The 2.2-litre four-cylinder turbo diesel engine has some good grunt down low, with it serving up a potent 440Nm of torque from 1750-2750 rpm. Peak power is rated at 147kW at 3800 rpm. It’s quite a bit of a workhorse, too, with it not afraid of the rev limiter when asked to dig deep. Be it cresting hills or overtaking, the Palisade takes them all on board without making much of a fuss.

The eight-speed auto pairs well with the engine and works discretely in the background. It responds quickly to your right foot, too, diligently dropping a few cogs when you plant deeper into the pedal. It’s just a shame that the selector is a set of buttons rather than a lever and it does take a bit of getting used to. 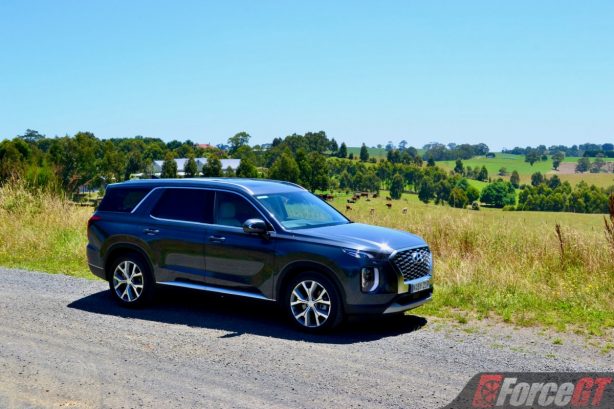 We got to test out the Palisade’s off-road capability on a short diversion through some moderately easy gravel tracks. The Palisade’s HTRAC all-wheel drive system is constantly variable and can send up to 50 percent of torque to the rear wheels. With three off-road modes available – Snow, Mud and Sand, the system affords good traction on all but the trickiest of terrain. Unless you’re onto some serious bush-bashing, what’s on offer is more than capable to cover for most family trips.

Back on the black top, we pressed on toward the vibrant seaside town of Inverloch, where in summer the population often more than doubles due to the influx of holiday makers from Melbourne and around Victoria. Quite a few gave the Palisade a closer look, too, when we were parked, only to ask us afterwards: “is this a replacement for the Santa Fe?”, to which we replied: “no it’s one size up from the Santa Fe”. 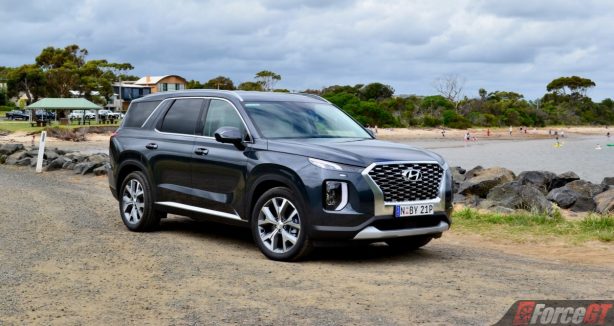 A quick bite at the local café and we were on the road again, this time heading some 20 kilometres eastward toward Venus Bay, our final destination. Once again, the Palisade shines as a long-distance cruiser, smoothing out patches of pimply country roads and keeping the summer heat out with rows of ceiling-mounted air-con vents.

The last few kilometres of our route swerve around the Tarwin River – a popular spot for fishing – before winding up at a sand track that leads right to the shoreline. With the Palisade squeezed into a slot at the parking ground, it’s time to cool off in the water.

The full-size Hyundai Palisade SUV combines a spacious and well featured cabin with admirable powertrain and handling performance. For families which have traditionally relied on big, full fledge four-wheel drives for space and versatility because nothing else on the market offered the same, the softer, better mannered, and equally versatile Palisade may be the alternative that those families have been looking for all along.