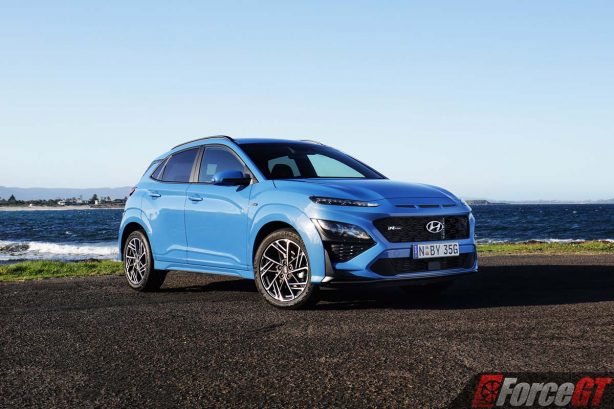 In a style and technology-led segment, the Hyundai Kona is one of the boldest small SUV you can get your hands on.

It also comes with plenty of choices, with the quirky little model offered in no less than 11 variants, including one of the cheapest electric SUVs in Australia, the Kona EV.

It’s not surprising then that the Kona is one of Hyundai’s best selling models and often found in podium position along with the hugely popular but elderly Mitsubishi ASX.

Refreshed for 2021 with styling, mechanical and technology updates throughout the four-tier range, the Kona is set to continue to cement its spot on the ladder.

Prices are up across the board and span from a pocket-friendly (still) $26,600 for the entry-level Kona, to a not insignificant $64,000 (before on-road costs) for the EV – though the latter is now actually cheaper than before, with Hyundai announcing a $2,000 price reduction recently to coincide with the launch of the ‘Standard Range’ model with a less powerful motor.

Bang right in the middle of the price range is the $36,300 Kona N-Line AWD – a new addition to the line-up and a preview to the full fat Kona N hot SUV. So, there should be a variant that will suit you no matter your price bracket or driving style, including eco-warriors.

In this review, we are testing the sporty turbocharged N-Line AWD auto and green Highlander EV.

What is the Hyundai Kona? 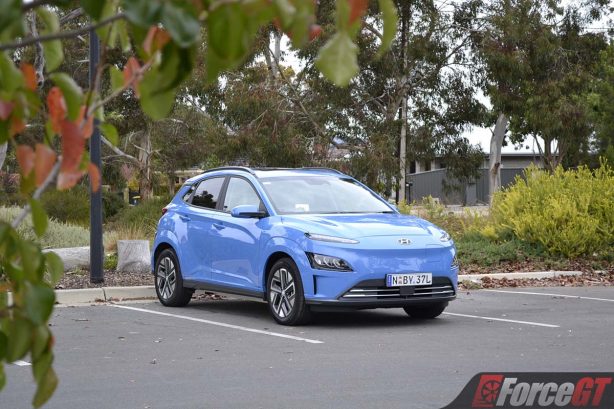 It’s a small SUV with the coveted high driving position that buyers these days are clamouring for and competes with the likes of the Mitsubishi ASX, Kia Seltos, Renault Kaptur, or in the case of the EV, the Tesla Model X.

The Kona is one of the first to be available as a fully electric vehicle in its segment, before the likes of MG ZS and Mazda MX-30 Electric joining the fray.

It’s also offered with a raft of big-car tech which are just as essential these days, including the all important cinematic 10.25-inch colour touchscreen infotainment system with smartphone mirroring, adaptive cruise control, and even lane-guidance with self-steering.

The Kona has received a comprehensive mid-life facelift and specification upgrades across the model line-up.

Starting with the 2021 Kona Electric, there’s a new-look closed grille that to my eyes, isn’t necessarily an improvement over the superseded model’s fake grille, which actually looked better.

There’s an asymmetric charging port at the front that announces you’re driving an eco-friendly vehicle. 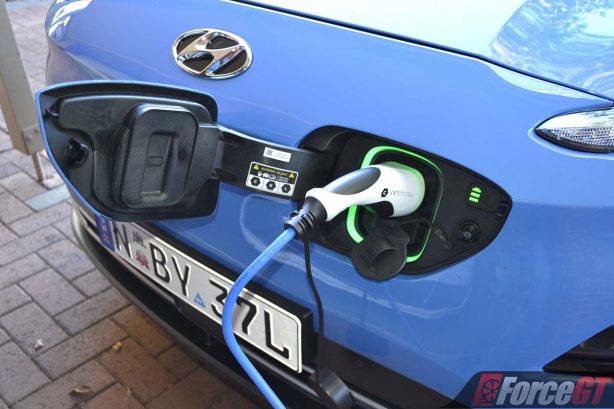 Like the wider Kona range, what’s more appealing to the eyes are the new LED Daytime Running Lights (which doubles as indicators) and sharper headlights with multifaceted reflector technology (EV) that stretch around the side of the car to emphasise its wider stance.

The body colour wheel arch extension also gives the car a more premium and sophisticated look, and continues into the restyled front bumper that incorporates a widened cascading grille and front skid plate.

Around the rear, the EV’s new bumper design features a new upper and lower split lighting design, while the N Line gets a chunkier styling with rear diffuser and twin tailpipes. 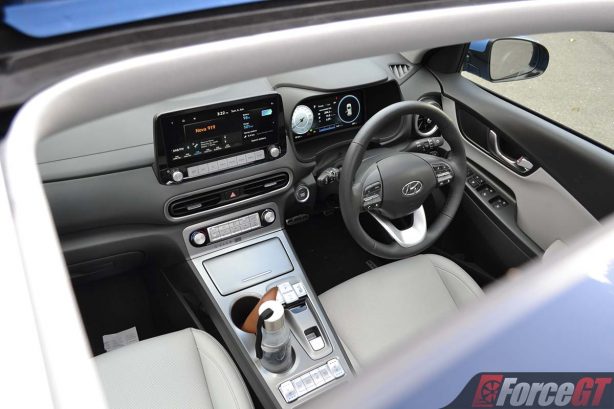 The new colour touchscreen is undoubtedly the standout upgrade to the Kona’s otherwise unchanged interior. Measuring 10.25-inch, it is one of the largest screens in its class and features a variety of user-selectable themes, split-screen capability, embedded sat-nav, as well as wireless Apple CarPlay and (wired) Android Auto.

The Kona Electric also scores a similar size digital instrument cluster that is familiar to drivers of the new Santa Fe, although the N Line continues on with conventional gauges.

Other omissions in the Kona N Line include the heated steering wheel, which comes in exceedingly handy in cold winter mornings, and head-up display.

Being the range-topper, buyers of the Highlander also get goodies such as an eight speakers Harman Kardon Premium Audio system, heated rear outboard seats, and ambient lighting with glowing cup holders and front foot wells.

Wireless smartphone charging is now standard across the range, while a new USB power outlet mounted to the rear of the console takes care of rear passengers’ power needs for their mobile devices.

Also new to the model is remote engine start which allows the driver to remotely start the engine via the smart key fob to pre-cool or pre-heat the cabin.

Elsewhere, the conventional hand brake lever has been replaced with an electronic park brake to free up some space and further de-clutter the cabin.

In addition to the standard six airbags, the Kona’s 5-star ANCAP rating (tested in 2017) has been bolstered by Hyundai’s expanded SmartSense active safety technology.

The Lane Keeping Assist system has been upgraded to include Lane Following Assist (LFA), which gently steers the vehicle back into its lane and is operational at speeds of up to 200km/h. 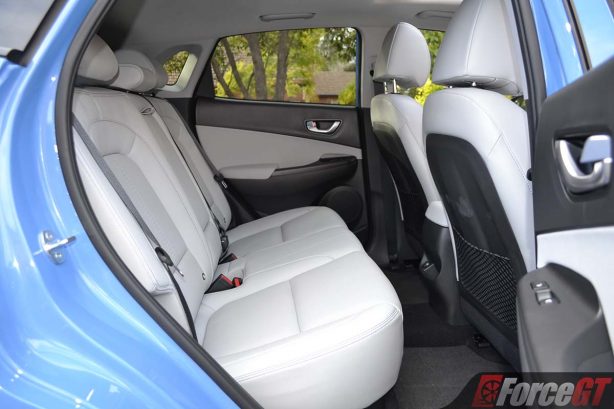 Despite its compact size, head, shoulder, knee and toe room are all at comfortable levels front and rear. The heated leather seats are comfortable and there are plenty of stowage areas dotted throughout the cabin, including on the rear doors and backseat map pockets.

There are four cup holders (two up front and two in the rear), two USB ports and two 12 volt outlets.

The transmission tunnel isn’t overly intrusive, meaning you can carry five adults if required without too much complaint.

Further aback, cargo capacity is rated at 374 litres although the batteries in the Kona Electric reduce this to 332 litres. The rear seats fold flat and expand the load carrying volume to 1,156 and 1,114 litres, respectively. 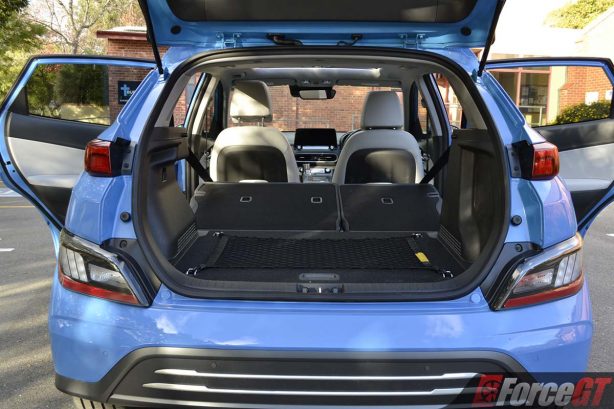 There’s also a fake floor with compartments sandwiched between the space-saver spare tyre and the boot floor to hide valuables safely, while the cargo net keeps loose items from rolling around.

What’s not so user friendly is the annoyingly glitchy wireless Apple CarPlay which drops out rather frequently. This is similar to what I experienced in Hyundai’s sister brand Kia, which shares the same software.

The rear doors also don’t open wide enough either, making entry and exit to the back seats slightly difficult for those with little children. 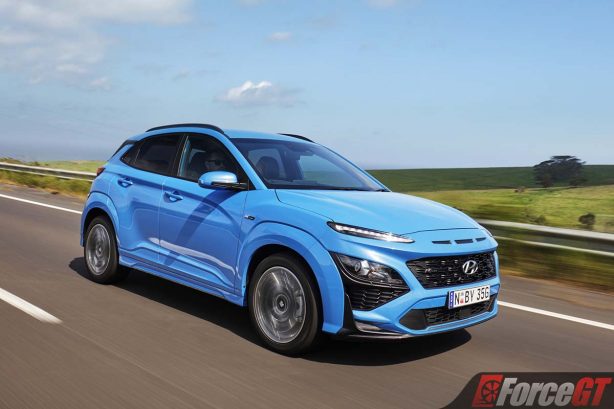 While it has decent punch, with good get up and go and is relatively responsive, it’s no match for the pin-to-the-seat feel of the Kona Electric’s 150kW electric motor with its 395Nm of torque that is available almost immediately.

However, the N Line does distribute its power to the road better, thanks to its all-wheel drive system, as opposed to the EV which can easily overpower the front driven Michelin Primacy4 tyres if you are not gentle with the go pedal.

Like other electric cars, all you hear is a low frequency whirr from the electric motor plus some minor road and wind noise from the wing mirrors. 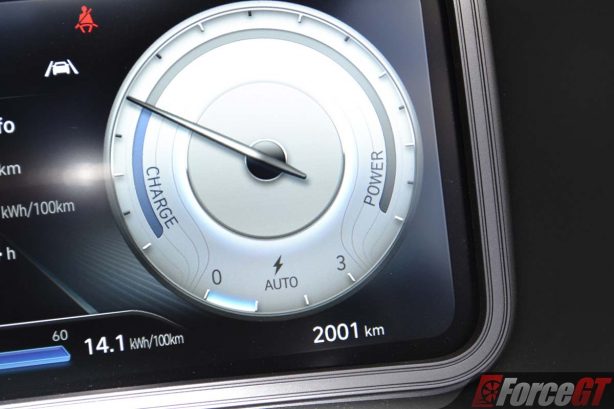 Both vehicles err a little on the firm side but are still comfortable around town, with the EV getting the edge thanks to its quieter ride and cushier suspension.

Out on the open roads, the N Line’s sportier suspension tune makes it a relatively enjoyable drive on country roads. It feels agile and its steering doesn’t feel too heavy.

And while the EV isn’t meant to be sporty, its low centre of gravity (thanks to its low mounted batteries) provides it with less vertical movement around corners compared to the N Line.

How much fuel or electrons do they consume?

Meanwhile, the Kona EV’s 64kWh lithium-ion battery saw an improvement is real world driving range, up from 400km in the pre-facelifted model to around 450km on test (against a claimed 484km), which is more than enough for daily driving. In fact, you don’t even have to charge the Kona EV daily.

Its energy consumption range from approximately 14.1kWh/100km (with heavy use of the adjustable regenerative braking) to 15.5kWh/100km and takes approximately 9 hours to charge when fully depleted.

The two models we tested can’t be more different in their personality.

The Kona Electric is all about efficiency and does so without compromising drivability and packaging. Its 450km range also means range anxiety is significantly reduced and more than sufficient to only plug it in perhaps once a week if your daily commute is no more than 30km like the average Australian.

On the other hand, The Kona N Line brings out the sportier side of the Kona, highlighting the versatility of the car’s platform. The turbocharged petrol engine combined with the all-wheel drive system and sportier chassis deliver impressive handling and driver enjoyment, while retaining the practicality synonymous with SUVs.

The Kona’s podium spot is all but assured.