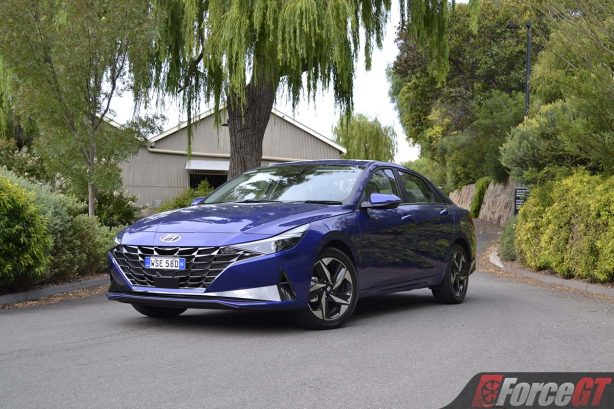 The Hyundai i30 Sedan is the latest addition to the successful i30 range. Built in right-hand drive specifically for Australia, it replaces the slow-selling Elantra as the brand’s new small sedan offering in the sub-$40,000 segment.

Capitalising on the i30 nameplate’s popularity, the fourth-generation ‘Elantra’ has its sight on the Toyota Corolla Sedan, and Mazda3 Sedan, both of which still enjoy brisk sales despite the shift to high-riding SUVs. It also debuts the new K3 platform ahead of the next-generation i30 hatch.

Unlike its rather placid forebears, the new i30 Sedan comes with lots more styling attitude. There are plenty of interesting angles and creases along the fastback silhouette, while the stylish rear end has a hint of Audi A7 to it.

Its new face, too, features lovely details such as the pattern on the futuristic cascade grille with in-laid turn signals and sharp-edged lower bumper moulding with air cushion intakes.

Inside, the wrap-around cockpit is a breath of fresh air and modernity with slim line integrated air vents and a unique horizontal four-spoke steering wheel.

So, to find out if a new name and sexier sheet metal can rejuvenate an old dog, we’ve put the mid-range i30 Elite Sedan to the test. 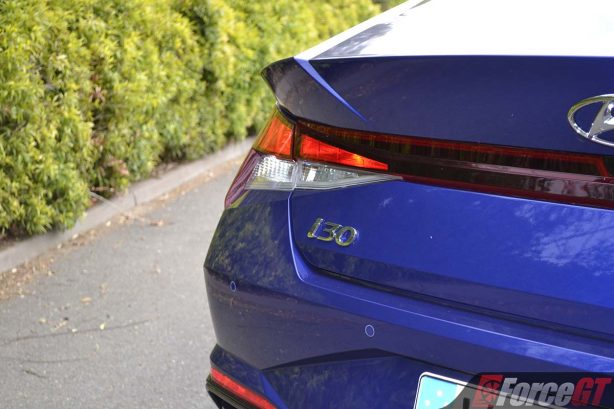 Gone were the days where Hyundai’s sat in the bargain basement of new car showrooms. The entry-level i30 Sedan is now more expensive than both its rivals, with the Toyota Corolla Ascent Sport priced at $25,395, and the Mazda3 Pure Sedan auto at $26,590.

All prices are before plus on-road costs like delivery, registration, stamp duty, etc.

What features do I get? 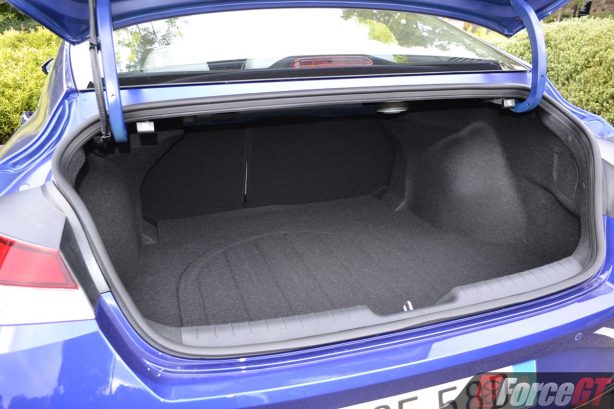 Compared to the i30 hatch, the sedan brings an extra 79L of boot space at 474L with the rear seats up. Country drivers and those who travel long distance will also be pleased to know the i30 Sedan comes with a full-size spare – a rarity these days.

There’s no lack of features, either, with LED headlights, 17-inch alloy wheels, smart key and push button start, remote start via the key fob and hands free smart boot all making the list. 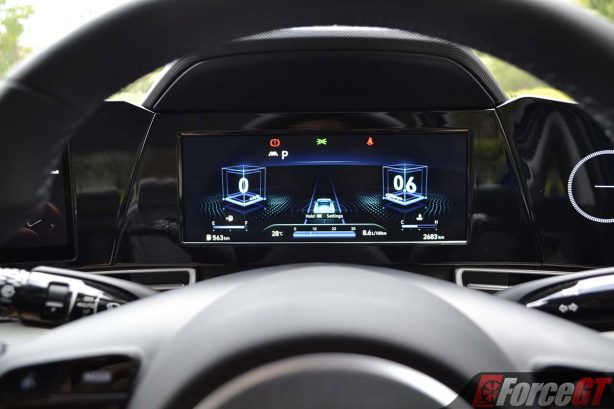 The virtual instrument cluster with four selectable themes displays the speedometer, tachometer, and driver assistance and navigation information, while the central infotainment screen provides a wide graphic user interface with split-screen capability. The latter also allows for the home screen to be customised and is capable of connecting with multiple Bluetooth devices. It can additionally create personalised user profiles – handy when are there multiple drivers.

Every model comes with Qi wireless smartphone charging, two USB ports at the front, as well as Apple CarPlay and Android Auto though the former not with the wireless connectivity like the i30 hatch.

The standard 8-speakers Bose Premium Sound System (Elite and N Line Premium) that comes complete with a subwoofer is also worth a mention with rich high notes and a solid bass.

Automatic variants also come with smart cruise control with stop and go that is well calibrated and won’t stomp on the brakes while the vehicle in front slows and moves over to the right turning lane like some early models do.

It also features Hyundai’s safe exist warning that alerts occupants from opening a door if a vehicle is approaching.

Despite the comprehensive safety arsenal, you won’t find an ANCAP safety rating on the i30 Sedan, as the car hasn’t been crash-tested for Euro NCAP (on which our system is based) since it’s not being sold over there. Hyundai also has no intention of crashing testing one here, either.

Having said that, the new K3 platform does promise to be stronger.

Is the cabin a nice place to be? 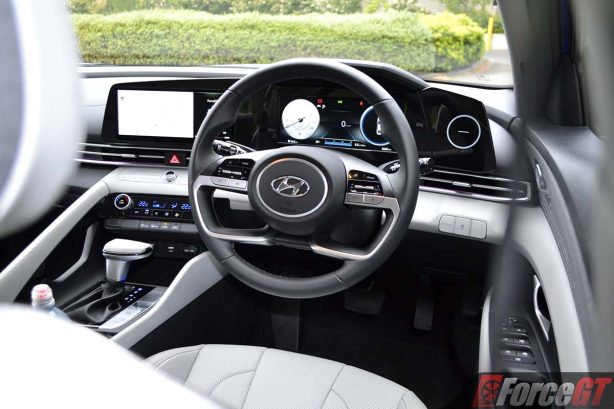 The i30 Sedan’s cabin is completely different to that of the hatch, with a decidedly modern dashboard that wraps around the driver. We particularly like the use of colour by the designers to further emphasis this.

You’ll find the door cards on the driver’s side are of a different colour to the passenger side, giving the illusion of a driver’s cockpit.

Ergonomics is good for both the driver and the passenger, especially the short cut buttons for frequently used functions below the 10.25-inch infotainment screen.

Not so the speed camera alert system that chimes incessantly after you’re way past the camera. We still haven’t figured out how to turn it off!

Cabin plastic is a mix bag, too, with the dashtop featuring lovely soft-touch materials while the lower dash, centre console and door cards all feeling hard and scratchy.

The cabin, however, feels spacious with a decent amount of head and shoulder room up front and plentiful legroom at the back, along with rear seat air vents and armrest. 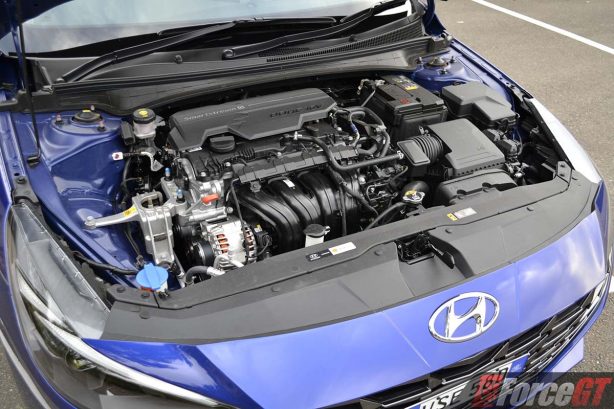 Non N Line variants of the i30 Sedan are powered by Hyundai’s proven 2.0-litre naturally aspirated four-cylinder petrol engine delivering 117kW at 6,200rpm and 191Nm of peak torque at 4,500rpm. Power is down slightly from the 2.0-litre four in the hatch, which produces 120kW/203Nm.

It’s smooth and quiet unit although not what you’d describe as punchy. Of course, that’s not uncommon at this price point, where most rivals produce similar outputs. Those wanting more grunt will have to step up to the N Line variants which are equipped with 1.6-litre turbo putting out 150kW/265Nm.

You won’t really notice its slight power deficit around town while it goes around doing its own thing in city traffic but head out into the country on a freeway, it certainly struggle a little. Once up to speed, the i30 Sedan is actually a comfortable cruiser.

The six-speed auto behaves well in everyday driving but like the engine, struggles to keep up at pace. It refuses to downshift in tight corners unless coax via a big prod of the throttle. 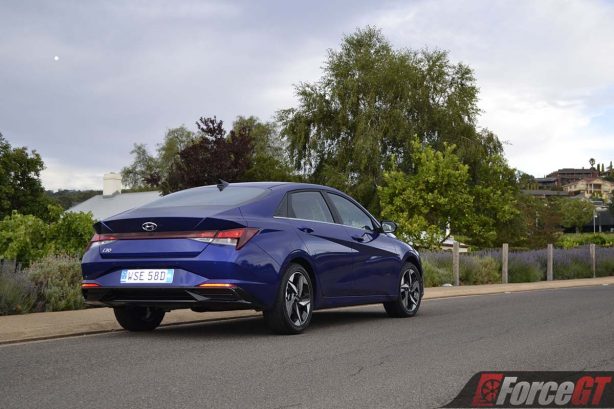 Surprisingly well. Around town, ride comfort is impressively subtle and untroubled by road wrinkles or camber, with only deeper potholes finding their way into the cabin.

Out on a winding road, the torsion-beam suspended i30 floats over most surfaces with good body control. It feels balanced through corners and there’s surprisingly good grip from the front tyres. Its handling is controlled without too much wallowing or bucking over bumps – a good testament for the new K3 platform and Aussie specific suspension tune.

Its steering is decently direct and responsive, but is also light enough at parking speeds for easy manouevre.

What about its running costs?

Our week long test saw the trip computer returning 8.7L/100km in average combined fuel consumption, with 85 per cent of the time spent in daily city commute, while the remainder is consist of freeway driving and country roads.

The i30 Sedan comes with Hyundai’s five-year, unlimited kilometre warranty, as well as complimentary 1,500km services and 12 months Roadside Assist.

There’s a lot to like about the rejuvenated i30 Sedan. For a start, its youthful looks is bound to attract younger buyers who would have previously shunt the Elantra. Young family will also delight in its roomy interior, while it handling is also much improved. Its positives are only blotched by the poor transmission calibration and low rent plastics in some of it’s otherwise beautiful interior.

2021 Hyundai i30 Sedan Pricing and Specification

Previous Lexus IS 500 F Sport Launch Edition rolls in
Next Production 2022 Nissan 400Z leaked, will reported known as the ‘Z’

Hyundai has unveiled what is arguably the sexiest people mover to ever grace these pages, …