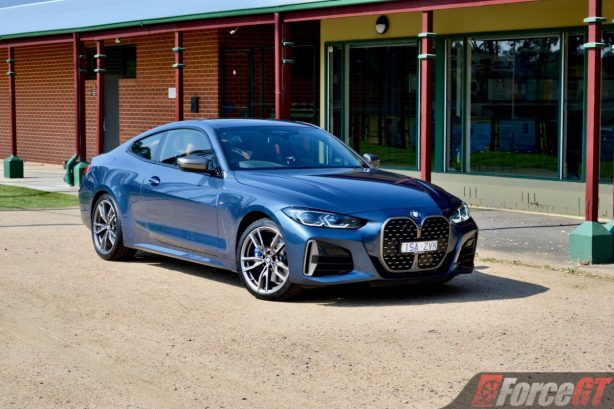 Every decade or so, we see a drastic shift in BMW’s design philosophy. At the start of the new millennium, BMW gave us the ‘Bangle Butt’, the infamous and controversial rear decklid on the E65 7 Series designed by then chief designer Chris Bangle (hence the nickname). The radical design tone was gradually softened through the rest of the decade. But then in 2010 out came the BMW 1 Series M, a baby M coupe based on the 1 Series which many found the quirky silhouette hard to digest. The 1 Series coupe later became the 2 Series, losing its contentious styling in the process for something easier on the eyes.

Ten years on from the 1M and we have arrived at yet another turning point in BMW design. This time the model leading the change is the 4 Series coupe, consistently one of the prettiest models in the brand’s line-up. And the change is happening to the part of the car that gives it its corporate identity – the BMW kidney grille. 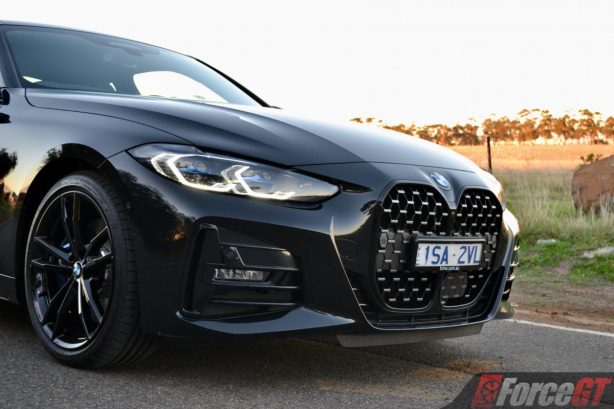 The enlarged kidney grille, as it is now most commonly called, is a risky move. It is again a like it or loath it affair. The new grille extends downwards all the way to the base of the front bumper, intersected by the number plate in the middle.

It may be the largest grille ever to grace a BMW, but the vertical design is not new. It was a familiar sight on BMW models from the 1930s through to the 1940s, including classics like the luxurious 327 and post-war 501 and 502 models.

The new grille design on the 4 Series coupe will take a bit of getting used to, no doubt, but after living with the car for two weeks, it has certainly started to grow on me. On its own, the grille looks odd, yes. But viewed as part of the front fascia, it gives an impression of a lower bonnet, not to mention unmistakable road presence.

Paint the whole grille black, and better still, match it with a full body black exterior paint like the 430i tested here, it looks as menacing as it is stealthy. Personally, this is the look that I would be going for if I were to buy a 4 Series coupe. 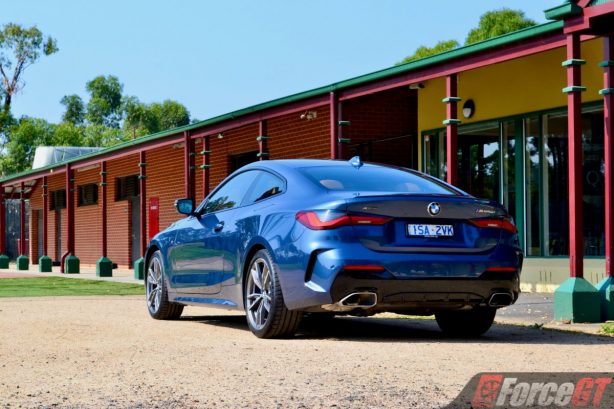 The rest of the car looks amazing. The prominent shoulder crease that adorned the previous generation 4 Series as well as the many generations of 3 Series coupe that came before it is gone, but in its place a more subtle shoulder line positioned lower in between the wheel arches for a more hunkered down look.

The rear haunches on the other hand, have grown, giving the coupe a more muscly rear-wheel drive look. The roofline is also more flowy than before, adding to its lusty, sports car look.

At the rear, things have really stepped up. The taillights have new design motive and they look property good when lighted up. The rear bumper has a deeper diffuser and gains a pair of side vents on either side.

As part of the M Sport package, which comes standard on all 4 Series models in Australia, the coupe rolls on 19-inch light alloy wheels and features M Sport brakes. 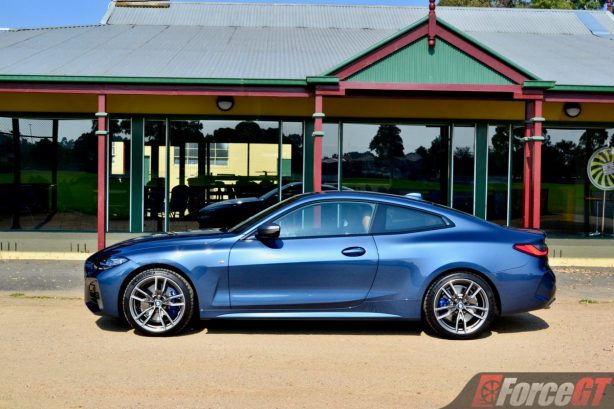 The interior of the 4 Series is largely based on the 3 Series, and it might as well because the 3’s cabin is uplifting, welcoming and expensive. Adapted for a low-slung coupe body, the 4 Series’ cabin feels sportier and more focused. Generous lashing of aluminium inserts is visible on the dashboard, centre console and door cards, while soothing interior mood lighting strips with changeable colour add to the night time luxurious ambience.

In terms of technology, you get a 12.3-inch fully digital instrumentation cluster with quirky C-shape dials and 10.25-inch infotainment display with BMW’s excellent iDrive 7.0 interface. While the iDrive rotary controller is still present in the centre console the display can now also be operated by touch. iDrive 7.0 features sat nav, Wi-Fi, Bluetooth, digital radio and Apple CarPlay and Android Auto smartphone connectivity. 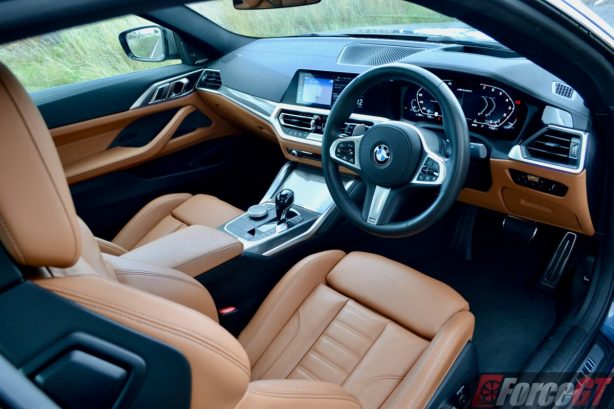 The well-bolstered front seats are snug, with excellent shoulder and thigh support. Front occupants also enjoy generous space and an airy cabin thanks to those large windows.

Being a 2+2 coupe, the 4 Series also features a pair of individual rear seats to accommodate two passengers. There is slightly more rear legroom than before, thanks to an increased in overall length by 128mm to 4,768mm and a 41mm stretch in wheelbase to 2,851mm. Rear headroom is less though due to the lower roofline. This makes the rear seats fine for children but not the best for adults on longer trips.

Due to the lack of a spare wheel (the 4 rolls on run-flat tyres), the boot space is a sizable 440 litres, just 40 litres shy of the 3 Series, and trumping the Mercedes C-Class by the same amount. The space is further expandable by folding the 40/20/40 split rear seat. 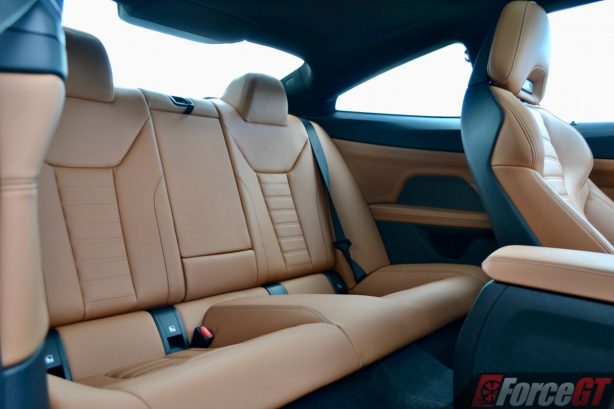 Powertrain line-up for the 4 Series range starts with the entry-level 420i, progressing to the mid-spec 430i and topped off by the flagship all-wheel drive M440i xDrive. Of course, there is the M4 top tog for the hardcore enthusiast. 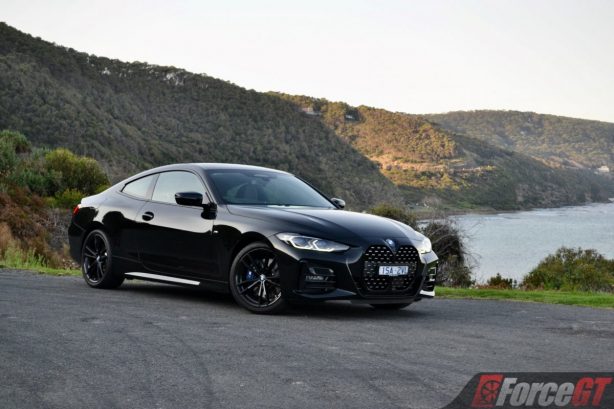 Priced from $90,900 plus on-road costs, the 430i has always been the sweet spot of the 4 Series range, and this new model continues that trend. It delivers the perfect blend of refinement, performance and efficiency. This is a 4 Series variant that feels relaxing and muted in everyday use yet ready for fun whenever you are.

The powertrain is next to faultless, with hardly any lag and seemingly endless waves of midrange torque. There is just so much eager when poked, as evident by its 5.8-second dash to 100km/h from rest. 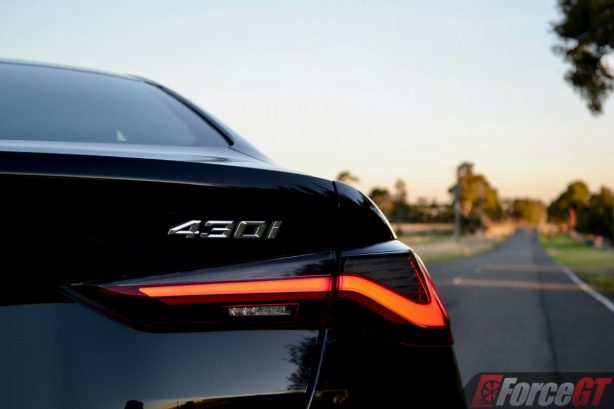 With a smaller engine than the M440i, the 430i also carries less weight around the front of the car, aiding balance and agility. Find a stretch of challenging back roads and the 430i will absolutely dance.

The passive dampers are very well sorted. The set-up pipes through just enough road feel for that sporty feeling without being overly busy on our average roads. It has a depth of versatility that makes the car relatively compliant around town, yet properly dynamic in the bends. 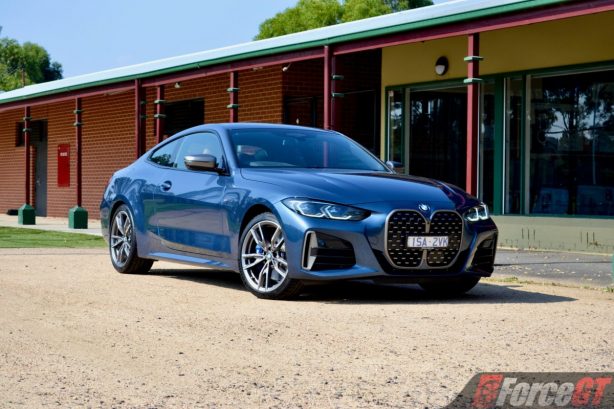 At $116,900 plus ORCs a pop, the M440i asks for quite a premium over the 430i, but you get the power of six cylinders plus all the drama and theatrics that come with it. The M440i is louder, faster and a little more hairy-chested than the always well-mannered 430i. It is as close as you could get to an M4.

The sprint from zero to 100km/h takes just 4.5 seconds, that’s only 0.6 seconds slower than the M4. For a luxury cruiser, that is all the performance you ever need.

The M440i’s all-wheel drive serves up a tonne of grip, which adds a layer of sure-footedness and security when you are pushing this thing around. Make no mistake, this is no Audi quattro, which means under normal condition the AWD still prefers to spin the rear wheels more than the front, preserving that unmistakable BMW rear drive flavour. 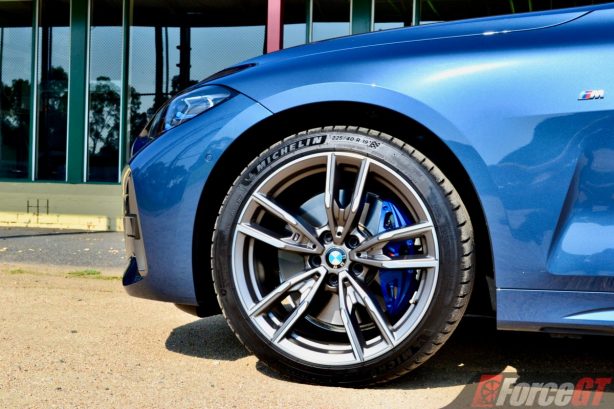 At the apex, the rear will hang out under a slab of throttle, which is then quickly neutralised by the front wheels. This allows you to carve corners at incredible speed, while still having throttle adjustability. Of course, AWD adds weight and you will feel it at the corners. Hardcore purists will miss the lighter and purer rear-drive 435i (which the M440i replaces).

The M440i’s performance is backed by tauter M Performance suspension and stronger brakes. There are also pops and crackles from the exhaust in Sport mode which add to the engagement. Like the 430i, the M440i rides smoothly around town, despite being more firmly damped. 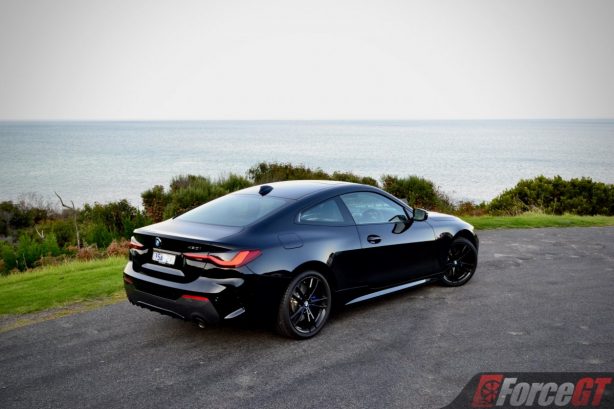 The 430i impresses with good fuel economy. If you are careful with your right foot, it’s capable of over 800km on a single tank (59 litres). Over my week-long test, I averaged 6.8L/100km on the trip computer, which is unexpectedly close to the rated figure of 6.6L/100km considering my occasional heavy right foot. 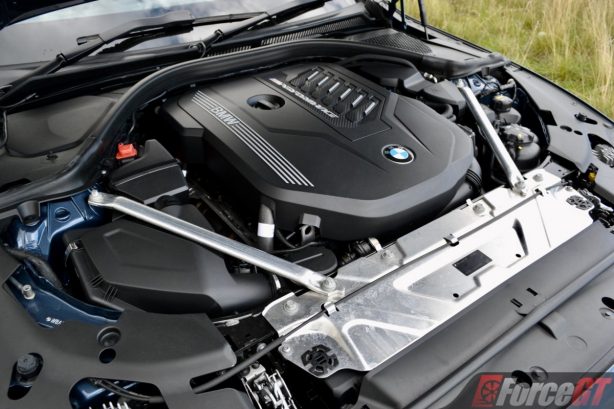 Unlike most manufacturers, BMW offers condition-based servicing for its vehicles. Rather than having a set servicing schedule based on distance or time interval, the 4 Series’ servicing is determined based on how the car is driven. This means servicing is more frequent if the car is often used for short distance travel or in extreme cold condition, or less frequent otherwise.

The BMW Service Inclusive Basic package covers your scheduled servicing needs for 5 years or 80,000 km, whichever comes first. With packages starting from $1,750, the Basic package includes your annual vehicle checks, oil changes, all filters, spark plugs and labour costs for the duration of the package.

The new BMW 4 Series is yet another step up from its already well accomplished predecessor. An exemplary all-rounder, the 4 Series combines impressive refinement, technology and performance in a luxurious package.

The average buyer will be drawn to the 430i’s fine balance between value and performance, while enthusiasts will be highly satisfied with the versatile yet entertaining M440i xDrive.

You just have to embrace that enlarged kidney grille.