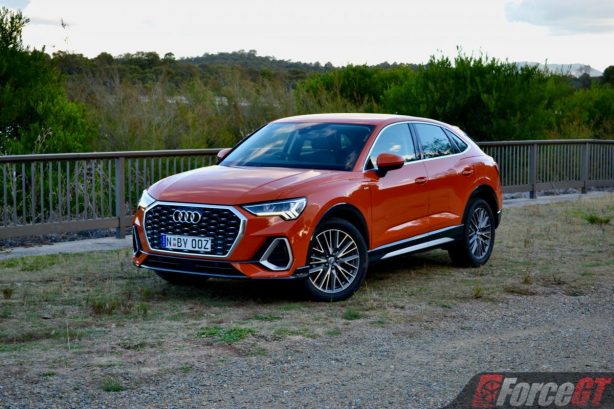 Got a baby on the way and it’s time for the sports coupe to make way for a family car, but think the SUV is too bland, too domesticated, too cookie butter? Fortunately, there’s this thing called SUV coupe. Although we don’t quite agree with its name, we see the point.

Let’s be honest, the SUV concept is getting a bit long in the tooth. The streets are choked full of them and every second neighbour has one. Time to stand out, don’t you think?

The so-called SUV coupe combines the practicality of an SUV with the stylish silhouette of a coupe. Well, that’s the intent at least. Few SUV coupes managed to get it right and one of them is the Audi Q3 Sportback. 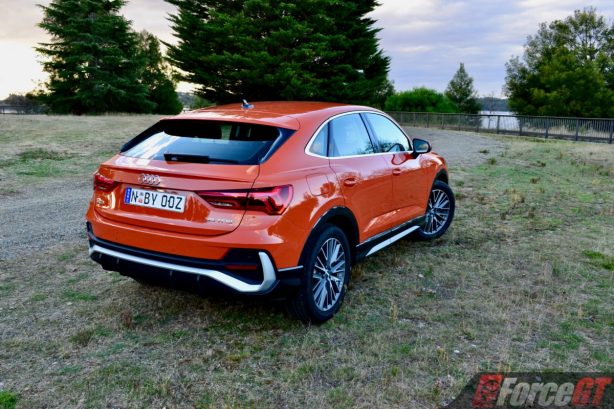 While the bright exterior paint work may not be to everyone’s taste, the Q3 Sportback is no doubt one of the better-looking players in this segment. It ought to be, as style is important in this class, which includes entries like the BMW X2, Mercedes-Benz GLA and Lexus UX. In fact, the Audi is the only true coupe-inspired SUV in the competition, with a proper coupe-ish roofline and rear haunches. 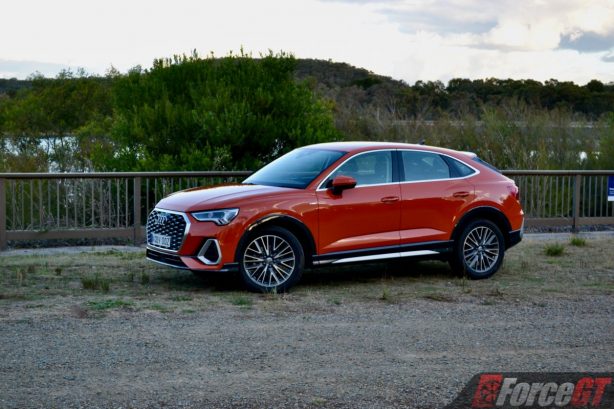 It’s hard to tell that the Q3 Sportback shares headlights, taillights, front bumper and majority of the lower body with the regular Q3, but it does. And yet it looks like it’s been designed from the ground up as a coupe-style SUV.

There’s the usual Audi signature design elements like the singleframe grille, boxed wheel arches and stretched glass house, complemented by more athletic looking front and rear bumpers and side skirts that are all Sportback specific. 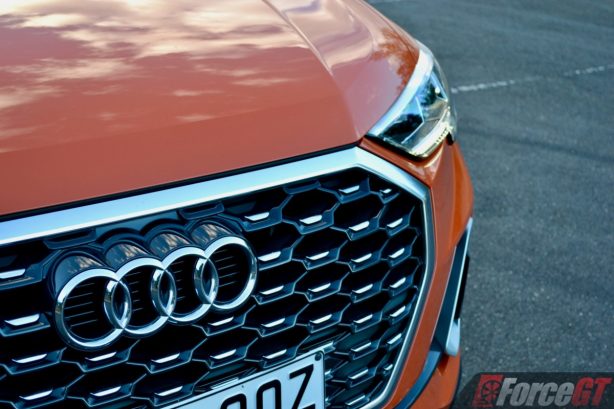 The Q3 Sportback is 22mm longer and 60mm lower than the standard Q3. Both cars share the same width and wheelbase of 1856mm and 2677mm respectively. As expected from an SUV more focused on aesthetic, ground clearance is slightly poorer in the Sportback at 183mm, compared to the Q3’s 191mm.

Audi’s reign in interior design continues with the Q3. If you’re a fan of ultra-modern and contemporary interiors, The Q3 is for you.

Both the regular and Sportback variants share the same interior design, which features a minimalist yet functional dashboard. Centre to the driver-orientated cockpit is a super high clarity 12.3-inch digital instrumentation display Audi calls ‘Virtual Cockpit’. The edge-to-edge LCD display is the most customisable in the business – you can even shrink the driving gauges and have a full map view right there in the driving binnacle. Such amazing are those graphics that you’d never want to look at a conventional instrument cluster again. 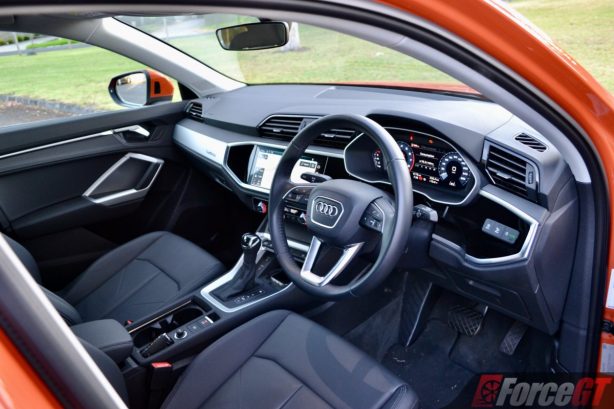 Complementing the Virtual Cockpit is a 10.1-inch Audi MMI infotainment centre display that is seamlessly integrated into the dashboard’s piano black trim. It’s now a touch screen, which means the rotary dial formerly in the centre console is now gone. Do we miss the dial? Not the slightest because the new touch screen is incredibly responsive to the touch, made easier to use with support for smartphone-like gesture such as swipe and pinch motions. Like the Virtual Cockpit, the display’s clarity and richness are just next level stuff. It’s also angled slightly toward the driver for easy reach. 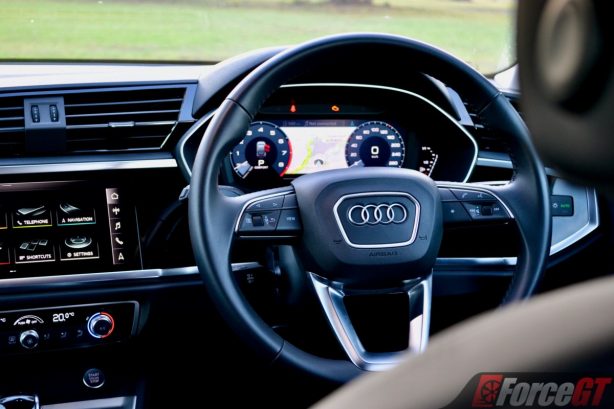 Things rarely go backwards in an Audi, but strangely the previous voice command feature seems to register inputs better. The new one struggles a little with address entry. But what it lacks in hearing ability, it makes up for in the sense of touch.

Remember we used to be able to write alphabets in that little touchpad just next to the old rotary knob? Like the knob, the touchpad is gone, but the ability to recognise handwriting isn’t. Instead of the touchpad, you can now use the whole centre touchscreen to scribble anything from address entry to function search. It works, and way quicker and easier than writing on a touchpad.

Apple CarPlay and Android Auto come standard, so are DAB+ digital radio and in-built satellite navigation. There are 2 USB outlets in front and another 2 in the rear. Also equipped are keyless entry and start, electric tailgate, and rear-view camera. Disappointingly for a premium vehicle, auto folding function isn’t included for the side mirrors. 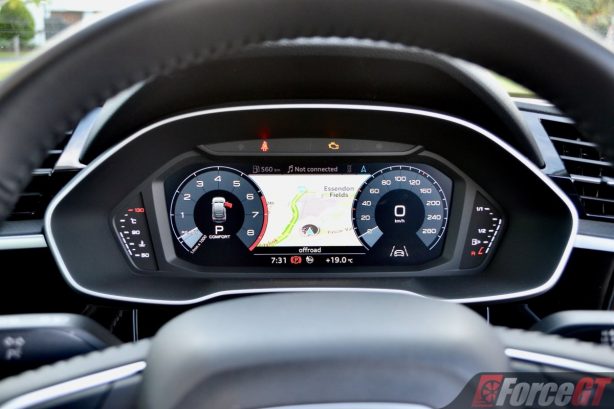 Typical of an Audi, the interior is flawlessly finished with top notch perceived quality. The gloss black trim on the dashboard is deep and rich, the polished aluminium trim inserts are nice and the stitching on the leather seats is neat and precise.

That said, there’s still a bit of Volkswagen-ish in the lower centre console where the plastics are hard and dull, and the cup holders lack a sliding cover over them. 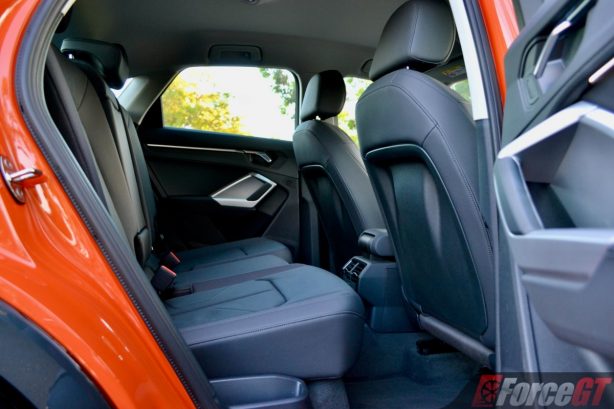 In terms of space, both the driver and front passenger enjoy good leg and headroom. Where things get a bit tight is in the back, and it’s a compromise for having that sleek, sloping roof line. Rear passengers, especially lofty ones, will find headroom lacking, but more than that, the rear seat base doesn’t extend all the way to the door. Instead, a narrow storage tub sits between the edge of the seat and the door. Three adults seated in the back will be an intimate affair.

Boot space, meanwhile, is listed at 530 litres, which isn’t bad at all for this class. With the 40/20/40 split rear seats folded, the space expands to a voluminous 1400 litres.

The 35 TFSI model is the entry point into the Q3 Sportback range, powered by a 1.4-litre turbocharged petrol engine that produces 110kW and 250Nm. The engine is mated to a six-speed dual-clutch automatic transmission and drives the front wheels. 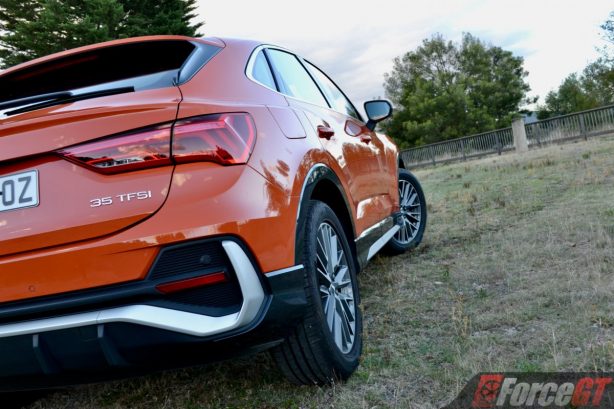 While the Q3 Sportback 35 TFSI’s 0 to 100km/h sprint time of 9.3 seconds isn’t much to shout about, there’s certainly more than enough pull to get through the daily grind. Peak torque arrives at a low 1500rpm and remains on tap until 3500rpm, giving it good grunt from the get-go.

The six-speed auto shifts quickly and cleanly, but is a tad slow to react and drop a few gears when you plant your foot on the throttle. This can catch you off guard when you’re trying to overtake. Also evident at times is that slight hesitation in first gear roll off around stop start traffic, a typical trait of dual clutch boxes.

Does the Sportback live up to its name of being the better handling Q3 variant? Yes, it does. At 60mm lower in height compared to the standard Q3, the Sportback benefits from a lower centre of gravity. More than that, it also gets tauter suspension tune. 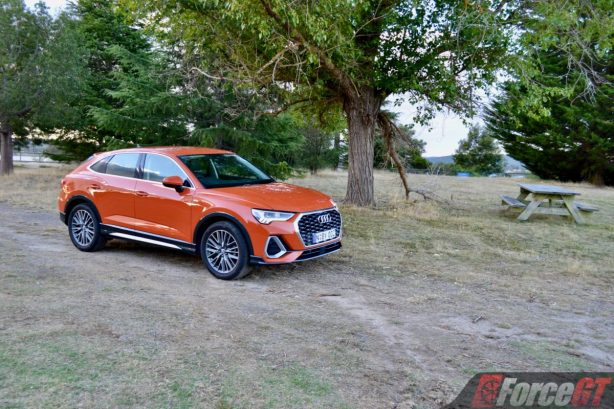 The driving feel is one that matches its athletic looks. There’s very little roll around corners, the nose turns in eagerly and the steering is sharp and accurate. Granted, there’s no quattro all-wheel drive in the 35 TFSI but grip level is still remarkable – you just have to be gentle with the right pedal to avoid breaking front wheel traction in the wet.

The sportier suspension lets you feel the road just right, without compromising ride comfort too much. It’s smooth on city roads and not too jarring on broken surfaces. It’s very quiet on the inside, too, with noticeably less wind noise than boxier, less aerodynamically shaped SUV.

Our tester isn’t fitted with the optional two-stage adaptive dampers but given how nicely balanced the Q3 Sportback’s ride and handling is, we feel it isn’t necessary. 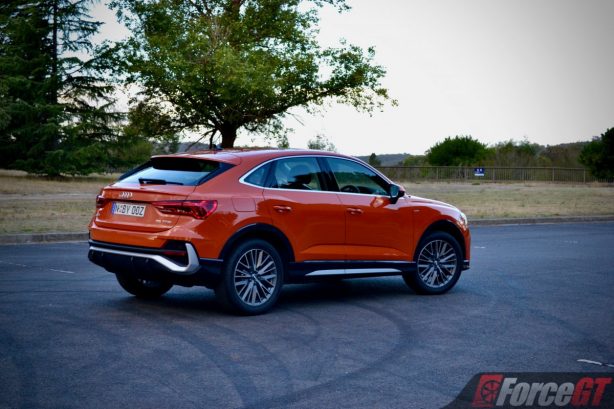 Audi claims the Q3 Sportback 35 TFSI consumes 7.3L/100km of premium RON95 unleaded fuel on the combined cycle. At the end of our weeklong test the trip computer returned a reading of 7.9L/100km, which admittedly involved a few stints of heavy-footed driving. For an SUV with sporty intentions, it’s a commendable figure.

Cruising at legal freeway speeds the Sportback’s fuel use hovered around 5.5L/100km, which is pretty good as well.

Like many premium brands these days, Audi Australia also offers a capped price servicing plan. Called the Audi Genuine Care Service Plan, the plan covers your servicing needs for three years/45,000km for $1,610, or five years/75,000km for $2,630. Servicing interval is set at every 12 months or 15,000km, whichever comes first.

There are several reasons why people would consider the Audi Q3 Sportback over the standard Audi Q3. By far the biggest draw card is the sexier, coupe-ish looks of the Sportback, which we commend Audi for getting it right. Secondly, it handles better, though not by much. And finally, there isn’t too much of a compromise in practicality, especially when the rear seats are occupied mostly by small children.

Laggy gearbox aside, if you’re happy to pay the premium, the Q3 Sportback 35 TFSI is definitely worth checking out.