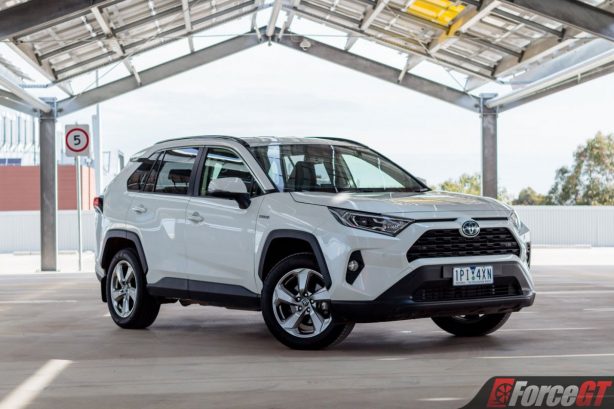 The Hybrid’s are becoming the norm and nowhere is this more apparent than with Toyota’s latest RAV4 where all grades except the top of the range Edge can be had with hybrid power. It’s the mid-spec GXL Hybrid All-Wheel Drive that we’ll be focusing on to see if the additional cost of the Hybrid system is worth it for the mid sized Toyota SUV. 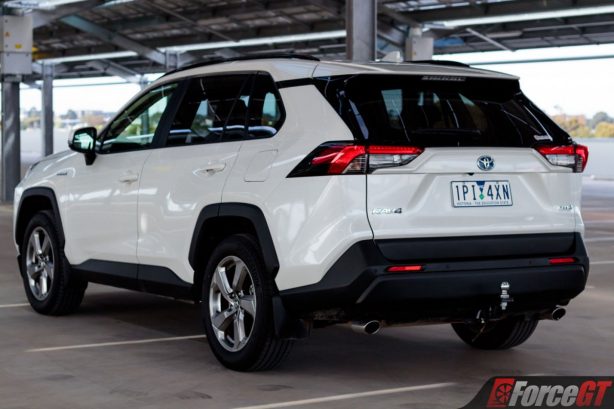 The first thing you notice about the RAV4 is that it’s quite the good looker and stands out from the crowd thanks to its sharp angular styling cues. The industrial styling of the front grille combines with the pumped guards and matte black protective skirting to give the RAV4 a tough and capable appearance that departs from the usual reserved looks found in most mid sized SUVs.

The ample guard clearance between the body and the 18-inch rims hint at the light AWD off-roading credentials tucked away under the body work to let you know that the RAV4 isn’t afraid of an adventure here and there. 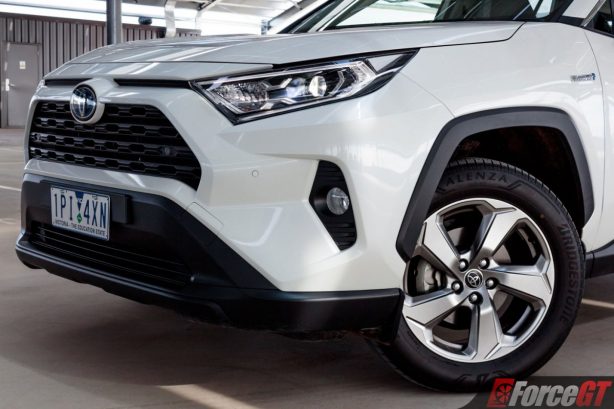 Toyota’s interior designers have kept pace with their body styling department to grace the RAV4 with an equally well styled cabin space that doesn’t sacrifice practicality. Even in mid GXL spec there’s ample use of soft leather materials used for the more commonly touched portions and the various textures heighten the sophistication of the entire design.

Thin A pillars combined with non-rising window sills ensure excellent visibility up front and to the sides where only the thick C pillars limit your view out to the rear back corners.

There’s a useful storage pocket built directly into the dashboard on the passenger side that continues over to the drivers side in the form of a smaller coin tray. Further storage comes in the form of the usual door pockets, dual drink holders and centre console pocket which will easily swallow a phone of any size to make use of the wireless charging pad. 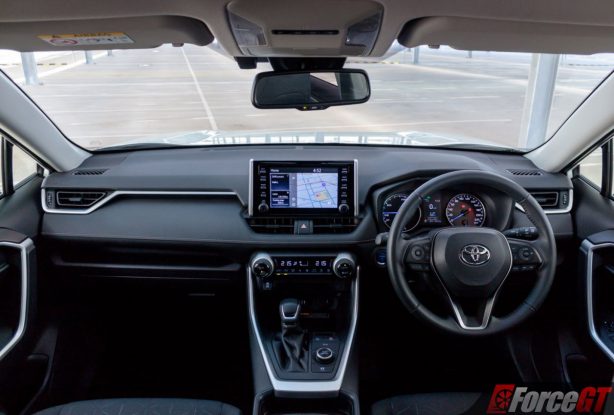 Most of the switch gear feels great to use offering tactile feedback except for the steering wheel buttons which have a mushy plastic feel to them. Another small gripe can be directed at the door handles which are set too far forward and offer little leverage, the end result is that when parked facing up a hill the doors become a challenge to open.

Rear passengers have access to both air ventilation and charging ports located in the rear of the centre console and there’s plenty of room to sit comfortably. ISOFIX mounting points are available on the flanking seats while the middle scores a set of drink holders in the drop down arm rest.

As with the front, visibility in the back is great due to the flat window sill profile and extended rear window allowing more light in which will keep the kids happy rather than car sick. 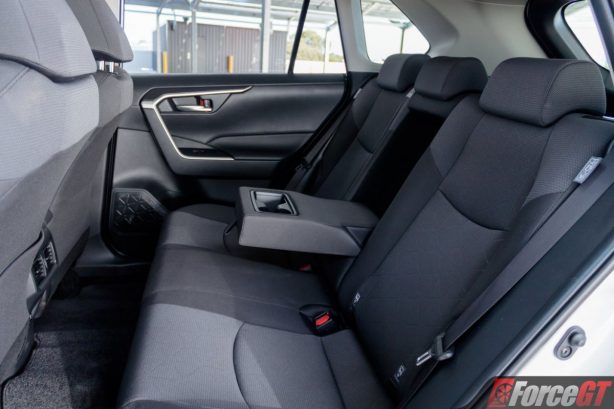 Storage in the rear is exceptional with a healthy 580 litres of boot space at a minimum that can be increased by dropping the 60/40 rear seats to a near flat position. Raising them back up again can be a struggle as there’s no straps hanging off the back so the only real option is to walk around to the back doors and pop them back into place. Flipping over the boot floor means that you can use the plastic covered side to store anything that would usually mess up the carpet which shows that Toyota have put real thought into how people expect to use the RAV4. One thing they didn’t consider so much is where to put the cargo shade when it’s not in use as it’ll either need to stay fixed in place or placed into your garage when not in use. 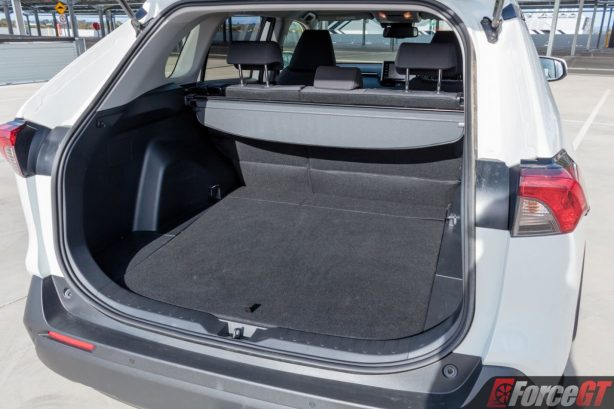 The petrol and electric motors work together to give the RAV4 163kW of power and 221Nm of torque from 3,600rpm. The front wheels are primarily driven by the petrol engine in tandem with the 88kW/202Nm electric motor while the rear wheels get their grunt from a 40kW/121Nm electric motor that kicks in on demand. Using the driving mode dial you can choose from Eco, Normal or Sport modes or opt to go EV exclusively until the car requires more power, then the petrol engine will kick in automatically. There’s also a dedicated Trail mode which will engage an off-road specific traction control setting and a brake differential to increase its off-road capability. 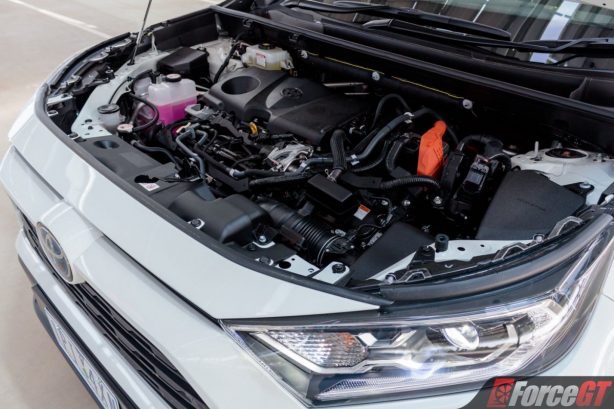 With your foot flat there’s enough power to get up to pace, the RAV4 is surprisingly brisk when poked and in sport mode it may even surprise a few from the lights. The linear power band delivery provides a very drivable engine that’s great for all situations. It’s refined and smooth with the hybrid system working to its strengths for quiet smooth initial acceleration and seamless operation. The CVT gearbox sorts out the power transfer and adds to the fuel economy by keeping the engine operating where it’s most efficient. 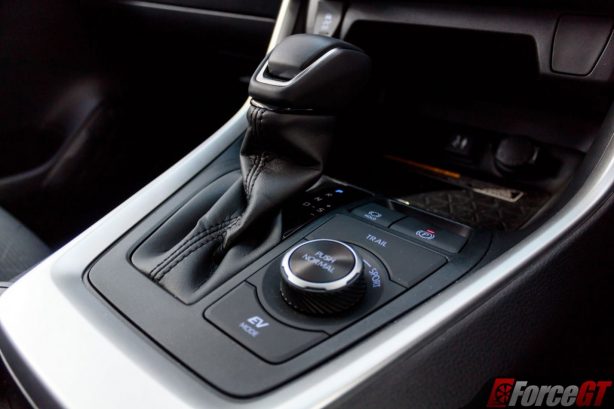 It didn’t seem to matter where or how I drove the RAV4, it always sat around 5.8L/100km with a best of 5.6L/100km on a freeway run. Very impressive considering its kerb weight of 1,730kg. Toyota suggests that a best of 4.8L/100km is possible and with Eco mode engaged and no climate control it’s possible to approach those figures.

The keen eyed among you will have noticed the tow bar hanging off the back of our review car which isn’t standard kit however if that option box is ticked the RAV4 will happily tow 1,500kg with a brake assisted load or 750kg without. Trailer sway control is available to keep things safe and for those of you that have ever been in a trailer induced tail slapper will be sure to appreciate the inclusion. 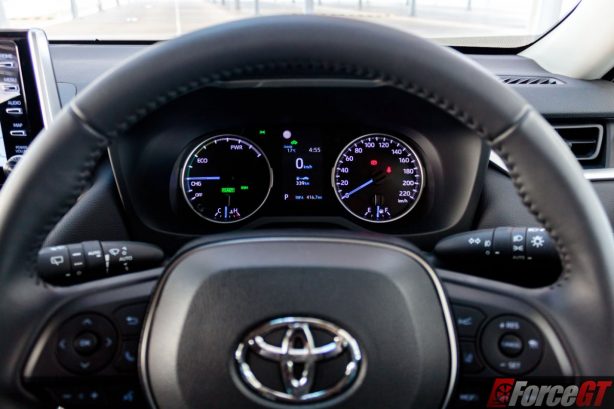 Good looks, practicality, a great engine and there’s more praise coming in the suspension department. The RAV4 has an excellent ride that seems to soak up everything and offer nothing but comfort in return. Usually this is achieved by having a soft and wallowy suspension setup but not so in this case, corners will have a bit of roll show up during the initial turn in but nothing that isn’t manageable. Push things too hard and you will hit the grip limit of the inside rear wheel but overall the RAV4 is a predictable and easy to drive car.

Steering feel through the wheel is nicely weighted and not too light or heavy, great for tight carparks. It’s here that the RAV4’s hybrid system provides yet another benefit, there’s a decently tight turning circle of 11 metres kerb to kerb due to the traditional front wheel drive suspension geometry.

Out on the open road the RAV4 filters out most external noise however the tyre roar does make its way into the cabin, it’s not deafening but is noticeable. 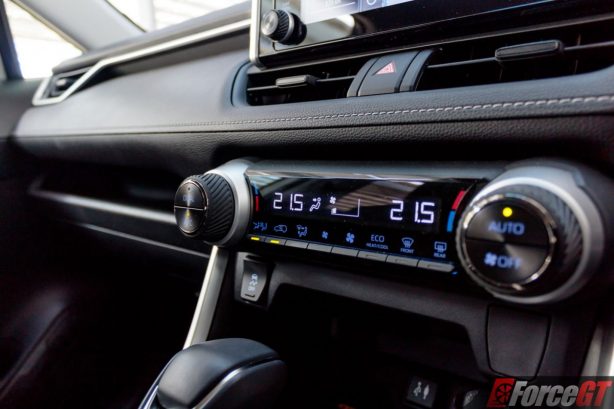 Don’t think that the RAV4 holds any punches in the features department, there’s plenty of big ticket items included particularly in the safety section:

Naturally the RAV4 scores a full 5 stars in the ANCAP safety test and with the level of safety kit included it’s little wonder why. The only downside is that the lane keep assist system is quite aggressive and tends to prefer sitting to the left of the lane rather than the centre so it mostly remained switched off for the duration of the test. 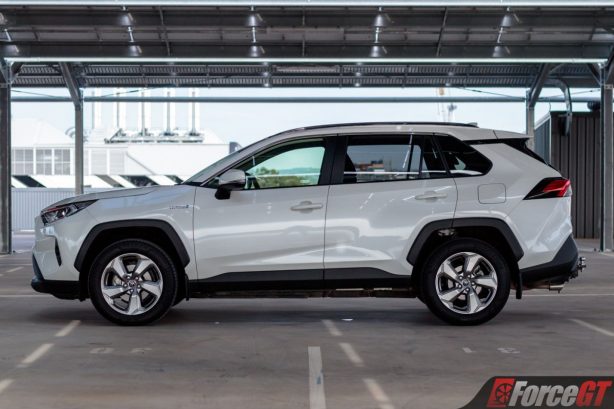 On the convenience side the RAV4 also comes with a generous helping of practical and clever toys to the tune of:

The infotainment unit runs through an easy to use 8.0-inch touch display and provides above average audio though I was expecting a more punchy system to make the use of the interior spacing. Kudos goes out to the team that implemented the electric parking brake as it activates and deactivates automatically based on the gear stick position. The only feature that I’m not a big fan of is the road sign detection that nags you should you ever exceed the detected speed (can be turned off). And finally, the inclusion of speed limited cruise control would have been a real bonus that unfortunately is missing from the otherwise well fleshed out feature list. 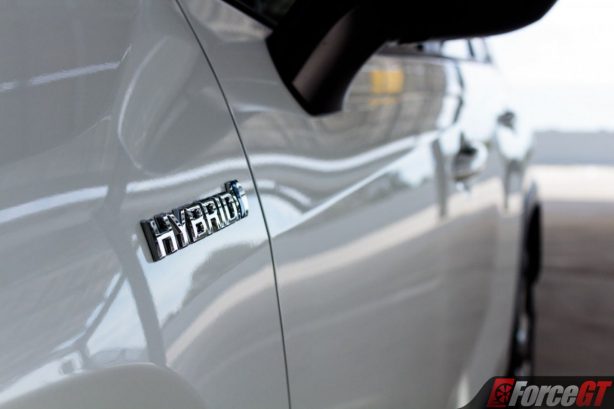 It’s no surprise that the 2020 Toyota RAV4 Hybrid is such a strong performer in the segment – great looks, a large array of tech and all wrapped up in that reliable and familiar Toyota package. Easily one of the best 5-seater SUVs on the market and well worth your attention.