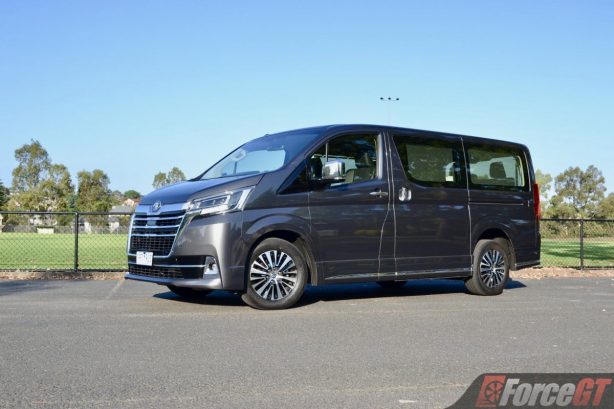 While seven-seater SUVs are great for hauling the family plus the neighbour’s kids around town, for the ultimate people transport, nothing beats the minivan, or people mover as it’s most appropriately known. There are a few options available in Australia, with varying sizes to suit families’ needs. But if you absolutely want the biggest of them all, you will be looking at the Toyota Granvia.

This real estate on wheels is a behemoth that could easily swallow an entire Honda Odyssey, its rival from the smallest end of the scale. That’s because the Granvia is based on the Toyota HiAce commercial van, which itself is already one of the largest utility vans around. Toyota is not the only manufacturer to spawn a people mover out of a cargo van though, Hyundai has done it with the iMax (based on the iLoad) and Mercedes-Benz with the Valente (based on the Vito Van).

But the Granvia represents a crucial turning point for Toyota, as it replaces the company’s long-serving Tarago people mover in Australia. While sales of the Tarago was a near even split between private and fleet, the Granvia is geared more towards fleet and limo operators, which explains the significant increase in size from the Tarago to the Granvia. 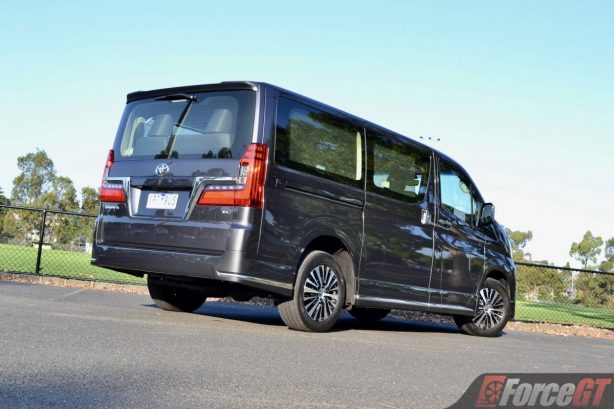 Offered in two grades in six or eight seats configuration, the range kicks off at $62,990 for the six seat Granvia, with the eight seater commanding a $2,000 premium at $64,990. It costs another $10,000 to step up to the top-spec Granvia VX at $74,990 for both the six and eight seat variants. All prices exclude on-road costs.

We tested the Granvia VX and first impression was it is a hell lot of car. Starting with the exterior, standard features include LED head- and tail-lights, 17-inch alloy wheels, keyless entry and start, power sliding side doors and power retractable and heated side mirrors.

A lot of sheetmetal have gone into building this giant but Toyota has managed to keep it from looking too ghastly overall. Apart from that massive chrome grille and side mirrors, the rest of the design is clean, classy and restraint. After all, it’s a big box on wheels and there’s only that much you could do with styling. 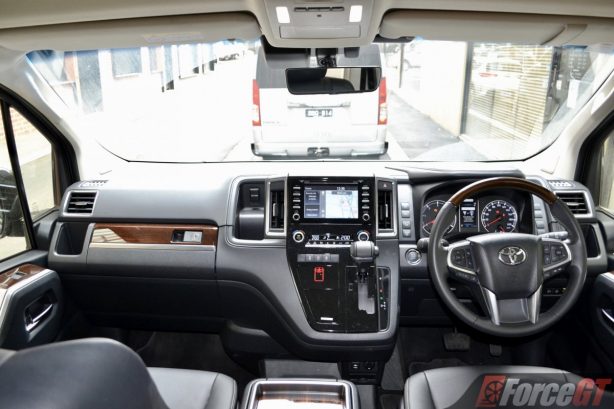 On the inside, there’s even more going on. Up at the front, the chunky dashboard may not win any design award but it’s well laid out and practical, with it dotted with storage compartments including a large glove box and an even larger centre storage. There’s a 7.0-inch touchscreen with satellite navigation, Apple CarPlay and Android Auto smartphone connectivity, and a decent 12-speaker Pioneer sound system (for VX grade).

Being a big van, you sit high up with a commanding view over the road ahead. The large side windows further help all round visibility, as do those massive side mirrors and the digital rear view mirror which displays a live feed from the wide angle rear facing camera. Coupled this with the surround-view monitor (360-degree bird eye view), manoeuvring the 5300mm long, 1990mm tall and 1970mm wide Granvia isn’t as daunting as it seems to be, you just have to look out for the height clearance of undercover car parks. 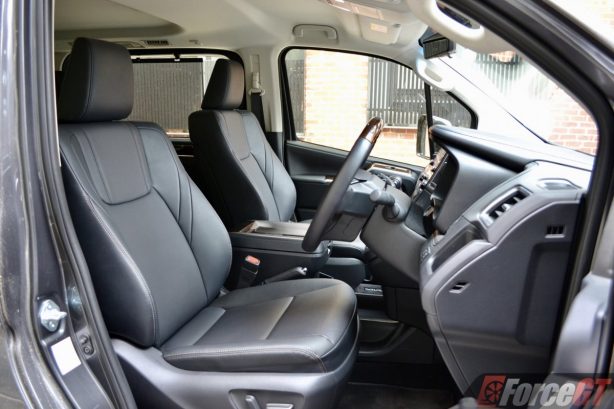 The front seats are plush and comfortable (8-way power adjustable for the driver’s), which is good news for chauffeurs. But it’s the passengers at the back that get the full VIP treatment. The VX we tested was an eight-seater which means there are four rows of two seats. The second and third row seats are the so called ‘captain seats’, each with dedicated arm rests on either sides and the ability to recline the seat back. The second row seats are even more luxurious as they come with ottoman and full powered adjustment.

With the quilted leather seats and ‘woodgrain-look’ trim throughout, the Granvia cabin doesn’t just look like a first class lounge, it feels like one. Sink into those incredibly opulent second row captain seats and it’s hard to get back up. The seats can be laid nearly flat for hours of ache-free commute, while the numerous glass and bottle holders and large side tray table (foldable) provide space for your favourite beverages and refreshments. Business travellers however, will struggle to do work on board as the lack of a front mounted tray table means there’s no space to place a laptop computer. 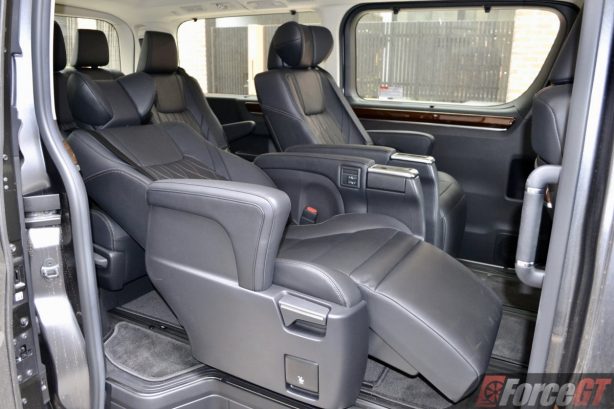 The third row seats allow less adjustment but aren’t a far cry from the second row seats in terms of comfort. The fourth row is a bench seat which, unlike those in most SUVs, is fully adult friendly with decent head and legroom for the average adult.

Each row of seat can slide forward or backward to create more legroom for a particular row of seat or more cargo space, but when the car is fully loaded with eight adults you’ll struggle to fit anything more than a few boxes of cereal in the boot. When the third and fourth row seats are not in use, they can be compacted by folding the seat base. Both rows can then be moved all the way forward to free up cargo space. But even then the liberated space isn’t voluminous by people mover standard.

If you have no need to carry eight people, you’re better off with the six-seater version, which replaces the third and fourth row seats with a single row of two captain seats configured exactly the same as those two in the second row. You get a bigger cargo area and your passengers enjoy more legroom. 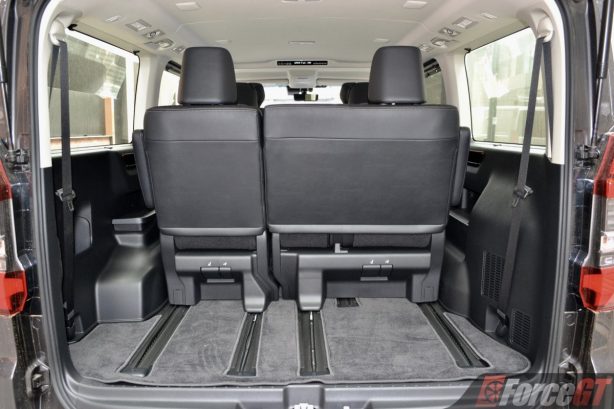 Back to the eight-seater variant, ingress and egress is a breeze thanks to the wide step, large aperture and a narrow but usable middle aisle that gives access all the way to the last row. Direct access to the third row is also possible with the second row slid forward to create a large entry space. For added convenience, the sliding doors on each side of the car are fully motorised at the press of a button.

Like the front, there’s no shortage of storage compartments in the rear, with at least a cup holder available for each passenger. For digitally connected families or business travellers, there’s a total of seven USB ports in the cabin plus two 12-volt outlets. The rear passenger cell also gets its own dedicated climate control, with ceiling mounted air vents fitted for each row of seats. Additionally, all rear windows are fitted with retractable sunshades. 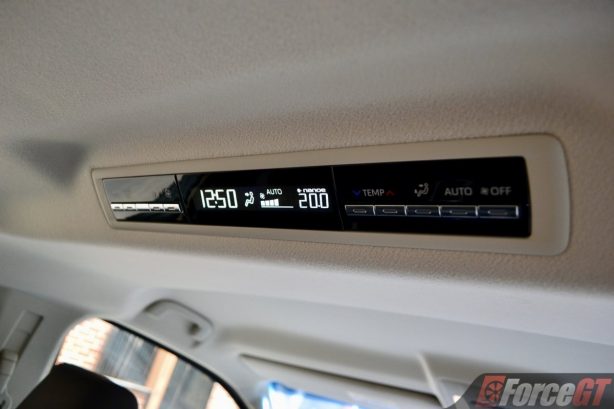 All Granvia models are powered by a 2.8-litre four-cylinder turbo-diesel engine borrowed from the HiAce. It produces 130kW/450Nm and drives the rear wheels via a six-speed automatic transmission. Despite its commercial van connection, the Granvia is relatively quiet and smooth thanks to extra sound deadening, carpets and interior panels. The engine is also a strong performer, with it capable of hauling the 2.6-tonne van with ease.

Our testing regime included a 70km drive out of Melbourne to the Yarra Valley wine region with a full load of six adults and two kids on board and the Granvia proved it was more than up to the task. The strong 450Nm of torque distributed from just 1600rpm to 2400rpm endow the people mover with good grunt from down low in the rev range, making it effortless around town and on the freeway. The six-speed auto works quietly in the background and is always eager to drop a few gears when more power is called for.

Surprisingly for such a big bus, the turning circle is almost car-like at just 12 metres from kerb to kerb. The steering is also very light at low speed, which is good for manoeuvring tight spaces. 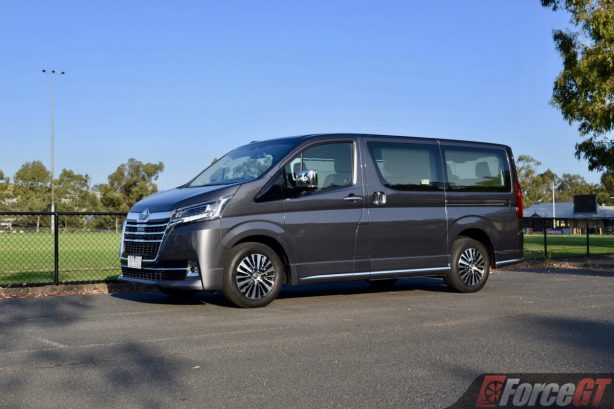 Being a premium people mover, ride quality is important, and the Granvia has managed to impress with a very compliant ride. The coil-spring rear axle set up is the main mechanical point of difference to the Hiace’s leaf spring rear suspension and it’s well tuned to iron out road imperfections without being too floaty around the corners.

There isn’t really much to fault as far as driving and passenger experience is concerned. Perhaps the biggest gripe is fuel economy. The Granvia is a large vehicle no doubt, but we were hoping to dip below 10.0L/100km given that it has a grunty diesel engine. While on paper it’s rated at just 8.0L/100km, in the real world you’ll see closer to 10.5L/100km with mixed driving. It’s not awfully thirsty but it’s way off the advertised figure. 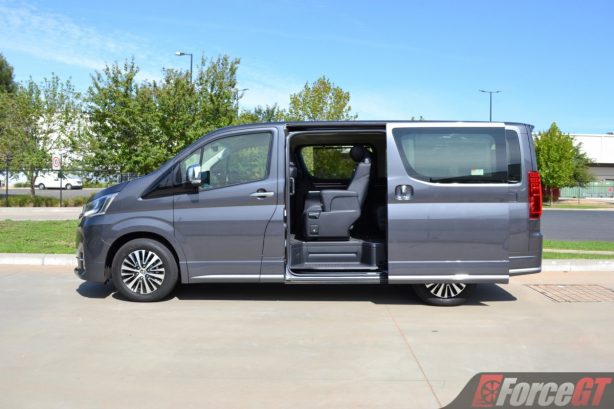 That said, the Granvia has a short servicing interval, requiring a visit to the dealer every 10,000km or no longer than 6 months, which ever comes first. Servicing is now covered by Toyota Service Advantage capped price servicing at $240 per service for the first 6 services.

While there are cheaper options to move a lot of people around, none comes close to the Toyota Granvia in terms of plushness and comfort. And for such a big vehicle, it’s surprisingly easy to drive and live with, too. That said, it’s lost some of the Tarago’s family friendly appeal, due to the lack of cargo space and the sizable footprint. It’s also a whole lot dearer too.

The Staria is Hyundai’s new people mover, replacing the previous iMax. The new name is …