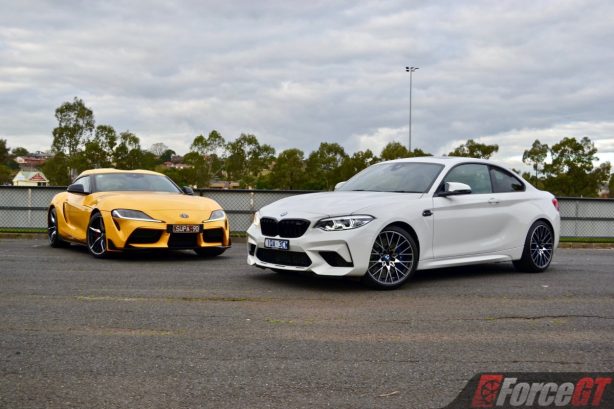 BMW M2 and Toyota GR Supra, two sports car that are so different yet so similar. The former is the smallest and most affordable model in BMW’s M line-up, while the latter is the flagship in Toyota’s GR range of performance offerings. Peel off the Toyota badges though, the Supra and M2 are essentially siblings, for the Supra is a Z4 M40i underneath.

Family confusions aside, if you have circa-$100k to burn on a sports car, you really can’t look past these two. And so, we have set them on a collision course to see which deserves your hard-earned money more.

The BMW M2 Competition on test here is priced at $109,900 and slots in between the M2 Competition Pure and M2 CS. Its rival for this shootout, the Supra GTS is a step up from the Supra GT with a sticker of $94,900. All prices are Australian retail prices and exclude on-road costs. 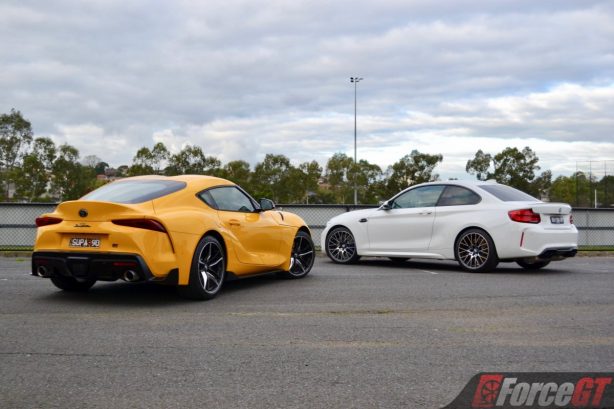 Let’s admit it, looks play such a big part in the cars we buy these days, what’s more when it’s a sports car. The M2 may be the baby M car but it’s got no shortage of stance and presence. Based on the 2 Series coupe, which is already a handsome thing, the M2 dials it up a few notches with bulging fenders, beefed up bumpers, blacked out kidney grille and quad exhaust tips. The proportion is spot on and it hits the right balance of restraint and aggression.

The wicked multi-spoke 19-inch rolling stocks are wrapped in sticky Michelin Pilot Super Sport tyres measuring 245/35 R19 at the front and 265/35 R19 in the rear. 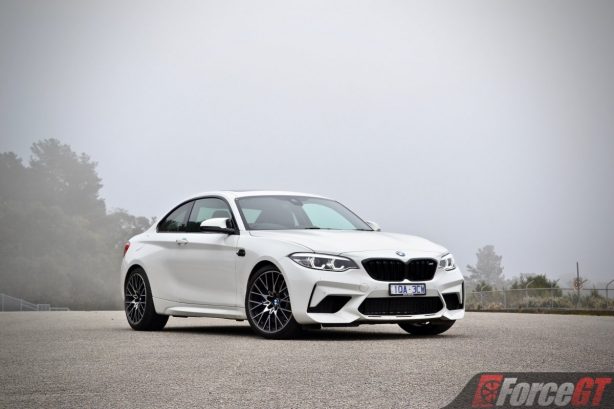 If the M2 looks hot, then the Supra is just outright flamboyant. Toyota designers had set out to design a pure sports car and the Supra looks every bit like it. The long bonnet, low roof and wide haunches set the basis for the design and from there finer details were added such as the scoops and slats, ducktail spoiler and the Zagato-like double-bubble effect on the roof. The big wheel arches are filled with striking 19-inch wheels with polished spokes. 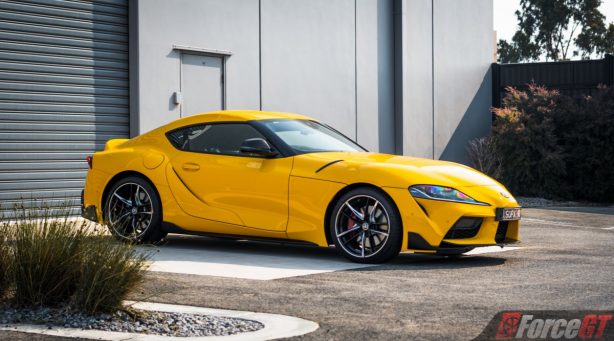 While the M2 gets nods from enthusiasts, for maximum visual impact, the Beemer can’t beat the Supra. The curvy, low and hunkered down looks of the Supra make heads turn everywhere you go. The Supra gets attention from everybody, literally.

That said, the Supra does cheat a little by using an extensive array of non-functional scoops and vents in the bumpers, above the front wheel arches and in the doors, some of which seem even counter-aerodynamic.

Now, onto the stuff that probably matters more than looks – the powertrain.

Both cars packed a BMW turbocharged 3.0-litre in-line six-cylinder engine (yes, even the Supra), and both are rear-wheel drive. But that’s where the similarity ends. 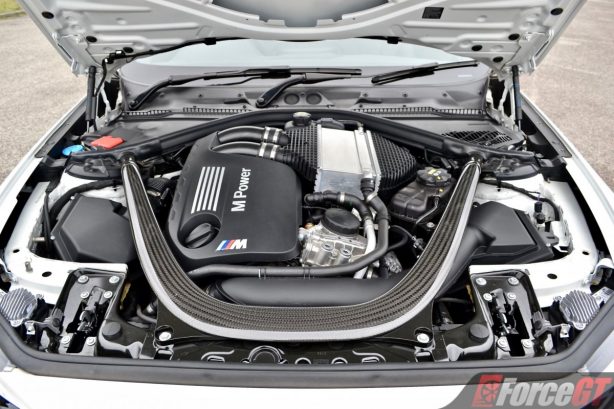 Meanwhile, the Supra’s B58 engine is shared with a wide range of BMW models – those bearing the M40i moniker. In the Supra’s case, it’s the exact same unit found in the Z4 M40i. Unlike the M2’s twin physical turbo setup, the Supra makes do with a single, twin-scroll turbocharger. Nevertheless, it still produces a strong 250kW @ 6500rpm and 500Nm @ 1600-4500rpm. 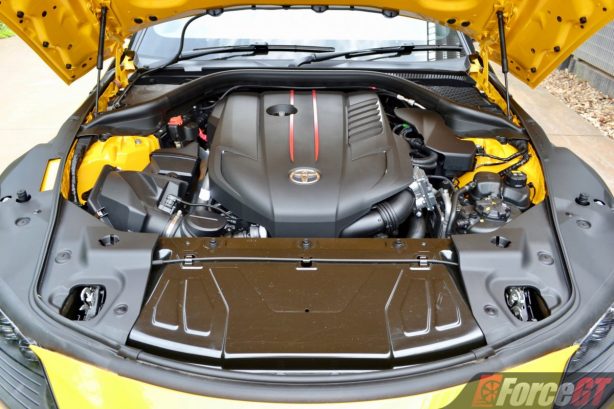 The way the cars send power to the rear wheels are different as well. In the M2 that task falls to a seven-speed dual-clutch gearbox, while in the Supra it’s taken care of by an eight-speed torque converter automatic. You can get a good old six-speed manual in the M2, but the Supra is auto only at this stage (make more noises and who knows Toyota may throw in manual ‘box). Both cars get limited slip differential in the rear axle.

What is different is the way they get there. The Supra feels refined and smooth, while the M2 feels raw and feisty. The differing experience is not surprising, given the former uses a very powerful M Performance engine, while the latter utilises a full-blown M powerplant.

For a sports car, the more characterful M experience will most certainly resonate more with enthusiasts.

There is little in it between these two when it comes to grin inducing driving. They are both immensely capable machines that feel most at home when the roads are anything but straight. From sustained high-G cornering to exploring the playful rear-wheel drive set up, both the M2 and Supra will happily do what you ask of them, every time. The poise, balance and agility in both these cars are simply unrivaled in this price bracket. An Audi TT S might come close but can’t match the fun you get from a rear-wheel drive. 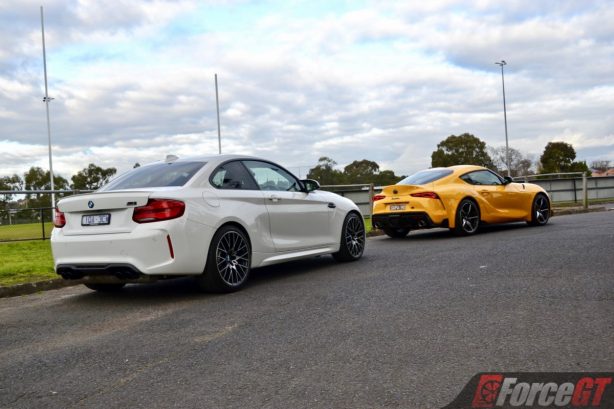 Again, it’s all down to the details and driving feel. In comparison to the M2, the Supra feels more generic and for the most part it’s got to do with lack of character in the engine and transmission. You have to be near the limit to truly feel special.

In contrast, The M2 feels like it’s ready to pounce even before you roll off your driveway. This thing fires up like a race car the moment you thumb the engine start button. And on the move, there isn’t a dull moment. Such high clarity is the driving feel that it seems as if every bit of the car is talking to you. The gear changes of the DCT is crisp, the steering has good feedback and the chassis is communicative. And most of the driving apparatus can be adjusted to suit your taste or an environment, such as a track.

The moment you drive off in the M2 and take your first turn, you know you’re driving something special, built by a dedicated team of passionate people. 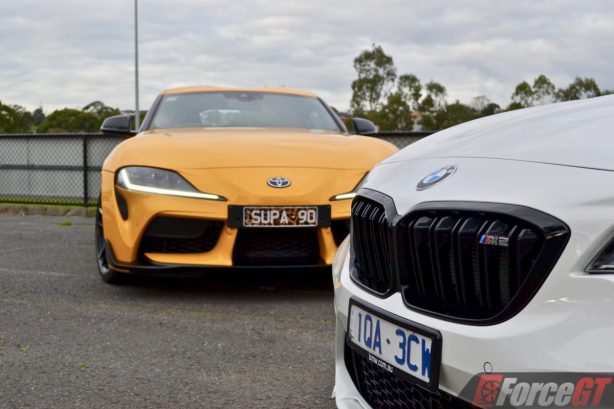 That’s not to say the Supra is pale, not by any chance, but next to what’s quite possibly the best M car you could buy today, the Supra just seems lacking a bit of fireworks and customisability.

The Supra does edge the M2 in a few areas though. You sit lower in the Supra, and the cabin wraps around you like a racer, giving you the true sports car cockpit ambiance. The lower height and inherently lower centre of gravity mean the Supra corners just a bit flatter, too. It also has more rear-end grip thanks to fatter rear tyres (275 vs 265).

The Supra is a strict two-seater, whereas the M2 has a pair of usable rear seats – usable because they can actually accommodate adults, though they may not be ideal for long trips. The Supra’s boot is also a full 100 litres smaller than that in the M2 (290 litres vs 390 litres). So, if you’re after a more practical sports car the M2 is a no brainer. 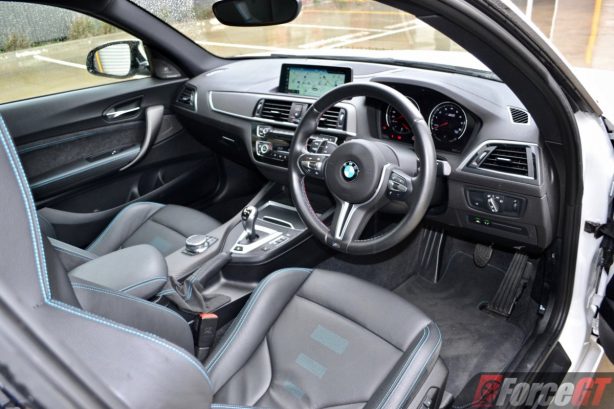 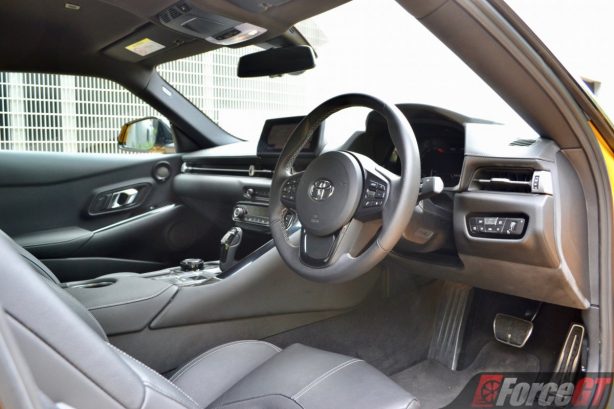 Congested roads around town work in favour of the Supra’s smooth-shifting torque converter gearbox. Mind you, the M2’s DCT is one of the slickest in urban traffic but at low speeds it’s never a match for a buttery slushbox. 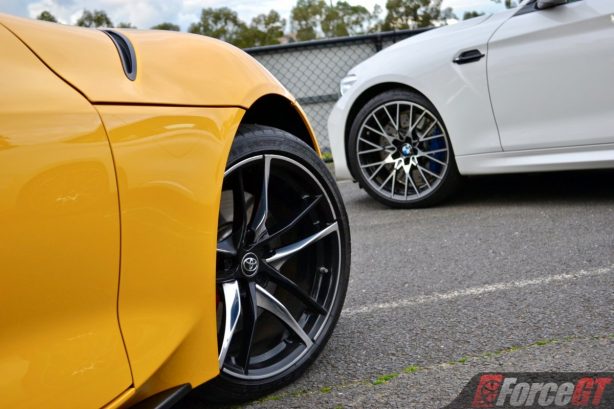 And for those who care, fuel consumption for the Supra is rated at a very respectable 7.7L/100km on the combined average. Driven with a heavy right foot it still managed a fairly responsible 9.0L/100km after nearly 400km of mixed real-world driving.

Claimed figures for the M2 are much higher at 9.1L/100km, with the tested average along the same test route also worse at 11.0L/100km.

Consumption aside, the Supra chews on RON95 unleaded while the M2 runs strictly on RON98. This makes the Supra the less costly car to run in the long term.

If this comparison were all about numbers, it would be hard to pick a winner. The Toyota GR Supra and BMW M2 Competition are so closely matched in performance and talents that saying one is better than the other in the technical sense is just invalid.

But for cars like these, it’s not always about numbers. Rather, it’s more about the feel and personality.

The Supra is very much a one-dimensional sports car. It tails off when you flatten the accelerator. It rotates when you turn the tiller.

The M2 also does all those, but adds the roar, the bangs, the pops and the twitches.

While the Supra gives you plenty of good times, all the M2 gives is great times.