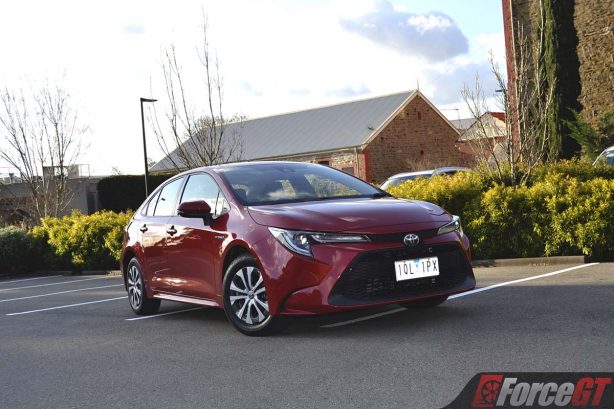 Twelve months after the arrival of the rejuvenated and much improved new Toyota Corolla Hatch, the larger Toyota Corolla Sedan has joined its sexier sibling in the showrooms, headlined by the availability of a hybrid powertrain for the first time.

While many might associate the humble Corolla with words like simple and reliable, the new range has rediscovered its dynamic mojo, thanks to the new generation modular TNGA platform on which it is based, as well as Toyota’s determination to shake its boring past and inject some sparkle into its entire range.

Welcome to the 2020 Toyota Corolla – not a white goods on wheels!

Essentially a booted version of the hatch, the sedan offers a similar level of variants, features and pricing as the hatch, making the purchasing decision a much straight forward decision – hatch or sedan.

The range starts from $23,335 for the Uber grade Ascent Sport petrol manual, with the CVT auto an additional $1,500. Entry to a hybrid powertrain starts from $26,335 for the Ascent Sport hybrid CVT. Stepping up to the SX petrol CVT costs $28,235, with hybrid power an extra $1,500, while the range-topping ZR is offered with a petrol engine only match with a CVT from $33,635. All prices are before on-road costs. 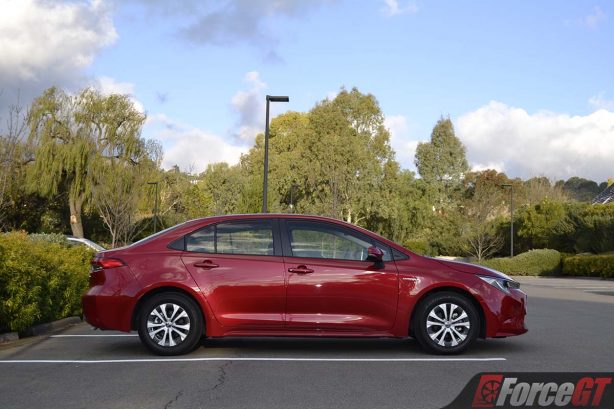 Its exterior design is also a big step up compared to the conservative-looking older car, sharing its front-end design with the popular hatch and featuring sharp swept-back headlights and dominant trapezoidal grille.

In fact, all body panels are shared between both models right up to the B-pillars, where they start to deviate. The Sedan’s rear doors are slightly longer to accommodate the 60mm longer wheelbase and the sedan’s three-box design.

Around the back, the rear-end is relatively conservative compared to the chiseled front end. Nevertheless, its styling is still a big improvement over the old model with new LED taillights and a sharp boot edge with counter sunk centre strip give the new Corolla Sedan a more sophisticated look. Its overall proportions are also better than its predecessor to our eyes.

However, that’s all let down by the Ascent Sport’s 15-inch wheels with cheap-looking hubcaps.

Thankfully, the high-spec’d variants all wear better-looking alloy wheels, with the 18-inch runners on the range-topping ZR looking especially stylish. 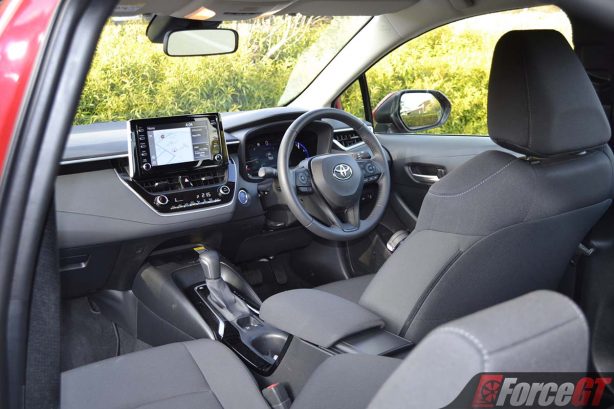 As you would expect, being an entry-level model means the Ascent Sport’s interior is quite basic, although it does feel well equipped and put together. The dashboard’s design is contemporary and simple, but made with good quality materials and solid switchgear.

Entry-level models also miss out on leather-wrapped steering wheel and gear shifter however, they are far from cheap looking.

Interior ambience has been given a boost courtesy of the big 7.0-inch multi-function display in front of the driver, along with the strategically located 8.0-inch touchscreen display featuring embedded sat-nav, Apple CarPlay and Android Auto.

Despite being the latest generation multimedia system, Toyota’s infotainment software is still a few steps behind the sophisticated and upmarket feel of class best systems such as those found in Mazda’s and Hyundai’s.

The Ascent Sport also missed out on digital radio and settles for a simpler and more cost conscious single-zone climate control instead of the more expensive dual-zone system found higher up the model range. 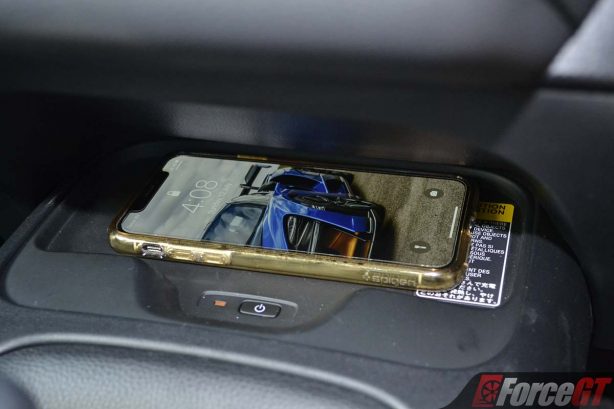 The only safety feature missing on the Ascent Sport is a blind spot monitoring system.

On the whole however, the humble Corolla Sedan is equipped with safety and convenient features that not so long ago were expensive options even on premium brands. 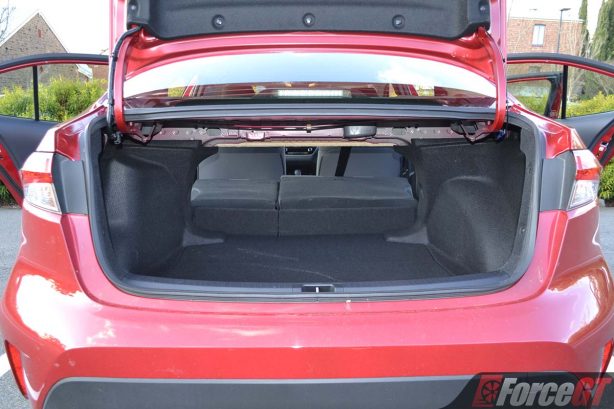 Boot space is equally generous at 470 litres (similar to the previous-generation sedan) and a big step up from the 217 litres offered in the bootless Corolla Hatch, but the boot floor isn’t flat when the rear seats are down. The boot space is unchanged whether its hybrid or petrol powered. It’s also 26 litres bigger than the popular Mazda3 sedan but is 32 litres shy of the Kia Cerato sedan’s boot.

There’s a full-size spare in the petrol Ascent Sport, while all other models run a space-saver spare wheel, including our Ascent Sport hybrid.

The driver gets a decent range of adjustment, including tilt and telescoping steering wheel adjustment and seat height.

Underneath the bonnet lives a 72kW/142Nm 1.8-litre Atkinson cycle naturally aspirated petrol engine married to a 53kW/163Nm electric motor. They produce a combined output of 90kW and 163Nm and draws power from a 6.5Ah nickel-metal hydride battery pack jammed under the rear seat. 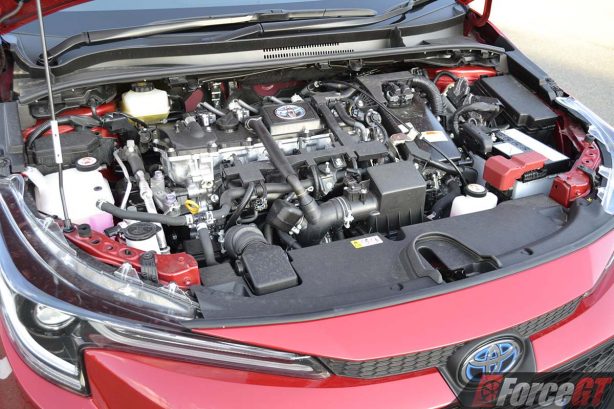 The power train is connected to a planetary CVT that launches cleanly and avoids the rev flares usually associated with CVT of old, while the electric motor provides a good dollop of low speed torque for a more confident driving experience.

With decades of expertise in hybrid technologies, the Corolla’s engine cuts in and out imperceptibly and smoothly. The electric motor is capable of propelling the car solely at low speeds and during low load cruising. The result is a small sedan that drives much like a Corolla but with added refinement and efficiency.

How efficient? Toyota claims the Corolla is capable of returning 3.5L/100km on the combined cycle but we averaged a still ultra frugal 4.4L/100km in combined city and freeway driving.

While the 15-inch wheels shod with 195/R15 Bridgestone Ecopea might not be much to look at, its much more compliant around town ride quality will please most drivers and passengers.

Like its hatch sibling, the Corolla sedan handles surprisingly well on twisty roads, offering a level of driver engagement and sportiness that far exceeds what is expected from the humble nameplate.

Out on the open road, the Corolla is relaxed and quiet, with just a hint of road and wind noise. But that changes as you go downhill with the adaptive cruise control engaged, as the car uses engine braking to slow itself down. Engine rpm can hit 4,500, which is disconcertingly noisy. Why can’t Toyota (or Lexus for that matter) employ the brakes some other manufacturers?

Besides that minor let down, the new Corolla Sedan is a thoroughly enjoyable small sedan.

In terms of ownership costs, the Corolla Sedan requires a pit stop at the dealer every 12 months or 15,000km, whichever comes first at a cost of $175 per visit. All Toyotas now come with five years warranty with unlimited mileage.

While prices are slightly higher than the sub-$20k starting prices of before, the 2020 Corolla more than makes it up with a big boost in standard safety and comfort equipment.

Its much bigger boot certainly adds a level of practicality to the Corolla Sedan’s otherwise in offensive outlook.

And if you have looked at our past reviews of the Corolla hatch, there are no big surprises with the way the Sedan drives, either. It handles confidently and has well and truly got its dynamic mojo back!