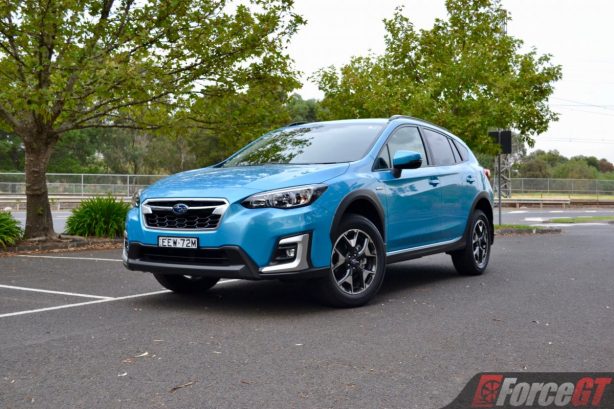 We have been looking forward to this for a while. Subaru’s new ‘e-Boxer’ hybrid powertrain is here and it marks the Japanese brand’s first foray into the world of electrification. Offered in the XV compact crossover and the mid-size Forester SUV, the e-Boxer adds a lithium-ion battery and electric motor to the 2.0-litre flat four under both cars for additional punch and improved fuel efficiency (supposedly).

For this review, we are taking a closer look at the XV Hybrid, which joins its petrol-powered sibling to compete in the small SUV market, one of the tightest passenger car segments out there.

Priced from $35,580 plus on-road costs, the XV Hybrid is a mere $340 more expensive than the range-topping petrol-powered XV, the $35,240 XV 2.0i-S. This places the XV Hybrid at the top of the rejigged five-tier line-up, in terms of price that is. Unlike the non-hybrid models, the XV Hybrid comes in just one trim level which is based on the entry-level 2.0i petrol variant, but gains additional safety gear and an exclusive new colour option called Lagoon Blue Pearl (as seen in our test car). 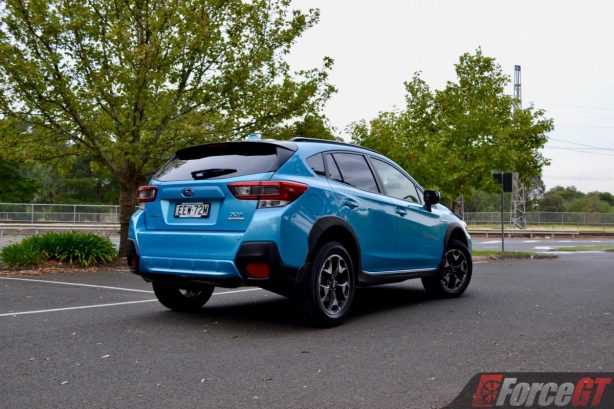 From the outset, the XV Hybrid looks identical to a regular XV save for a few ‘e-Boxer’ badges and silver highlights in the front bumper. This is a good thing. Boasting strong lines, boxed fenders and rugged wheel arch cladding befitting the brand’s adventurous image, the XV is a neat, honest looking compact crossover that isn’t going to win any beauty contest nor offend anyone.

If you think it looks a bit like a jacked up Impreza hatch, you’re right as the XV shares the same platform as its urbanised sibling. Several body panels including the bonnet, doors and roof, along with the headlights and taillights, are also all carried over from the Impreza hatch. 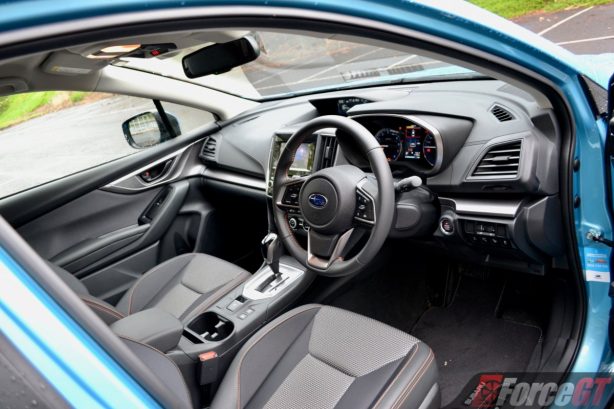 The XV Hybrid also retains the same interior as the regular variants. This means you get the same modern and impeccably built cabin with a clean and well thought out dashboard. Most touch points are soft and the faux carbon-fibre and aluminium-look trim inserts aren’t half bad at all.

All switchgear are ergonomically placed and have a nice tactile feel to them, though there are too many buttons on the steering wheel which got us confused even after a week behind the wheel. In contrast, the twin-screen infotainment and driving information set up in the centre of the dash is easy to use with good screen clarity. You just have to live with the smaller 6.5-inch touchscreen (as opposed to larger 8-inch version in higher-spec models) inherited from the base 2.0i grade level, which is just unfortunate at the Hybrid’s rather pricey $35k asking price. 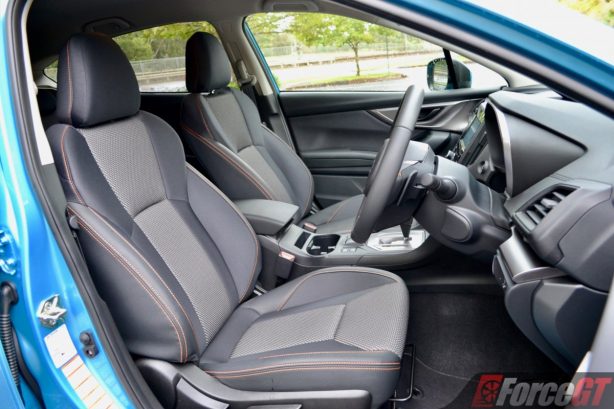 Subaru makes some of the best car seats in the business and the ones in the XV Hybrid are no exception. They offer great comfort and support, and even in the fabric trim of the Hybrid they look great in their two-tone colour scheme. Also typical of Subaru, all-round visibility from the driver seat is excellent, even in the usually disastrous forward quarter view thanks to the relatively slim A pillar and that small window bracket just fore of the side mirror.

Being one of the longer crossovers in its class, occupants enjoy generous legroom and headroom no matter where they are seated, though the unlucky one seated in the rear middle seat will not appreciate the raised center tunnel in the foot well which is rather high to accommodate the driveshaft for the all-wheel drive. 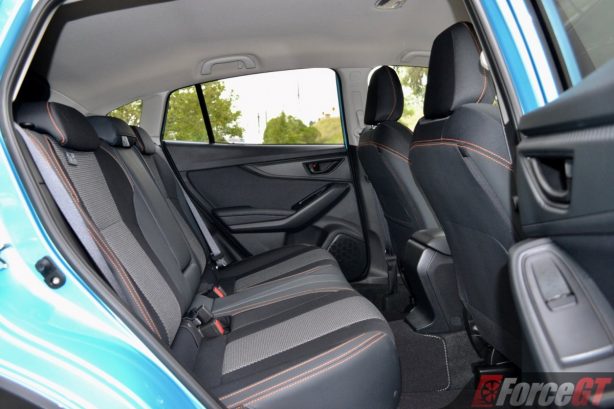 On really hot sunny days, the lack of rear air-con vents will also surely draw a few complains from sweaty rear passengers. That said, the XV’s air-con unit is one of the more powerful ones we have sampled, quelling the outside summer heat with unrivaled efficiency.

Getting children in and out of the rear is easier than ever due to the wide opening rear doors. The front doors, however, lack puddle lamp. 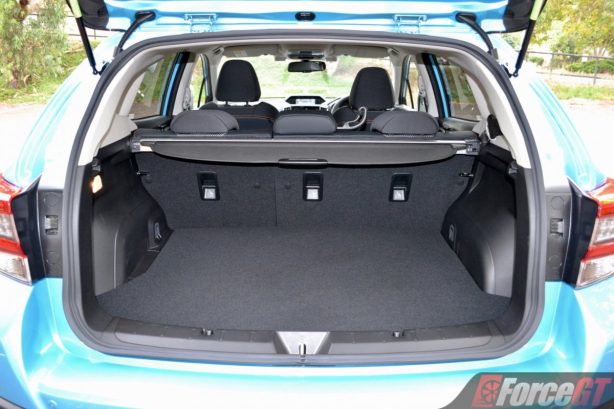 Hybrid models usually have less boot space than their conventional petrol or diesel powered equivalents due to the extra drive batteries under the vehicle. In the case of the XV Hybrid though, that’s the opposite. Its 345-litre boot is 35 litres larger than that in the non-hybrid XV, and with the rear feats folded, the resulting 919 litres of capacity is some 154 litres more. The reason being the Hybrid does away with the spare wheel in favor of a puncture repair kit – we surely aren’t expecting that from Subaru – and so the whole boot floor could be lowered to free up more space.

Lift the boot floor and you’ll know why Subaru has gone down that path. The battery pack for the hybrid drivetrain is located under the boot and just above the rear axle. There’s absolutely no more space left for a spare wheel. Subaru didn’t have a choice, really.

And interestingly, this brings the XV Hybrid’s boot space in line with that of the Impreza hatch, which ironically, has a spare wheel. 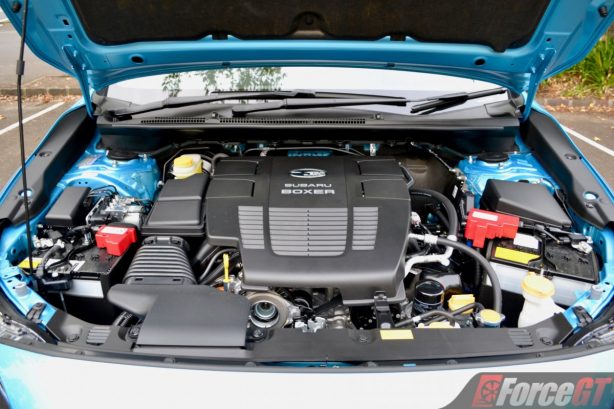 Now on to the stuff that matters most, the powertrain. The XV Hybrid’s so called ‘e-Boxer’ powerplant consists of a 2.0-litre horizontally-opposed four-cylinder petrol engine that develops 110kW at 6,000rpm and 196Nm of torque at 4,000rpm, assisted by a lithium ion battery-powered electric motor rated at 12.3kW and 66Nm.  The hybrid powertrain is self-charged via kinetic energy captured by regenerative braking and coasting.

Unlike most hybrid vehicles which start up in EV mode, the XV Hybrid fires up its petrol engine each time on start up, which is quite frankly isn’t very ‘hybrid-like’. This also means if you drive off right away you will be driving on engine power, but if you leave the car on idle long enough, the engine will eventually shut down and you can roll around quietly at low speed on electric power. It’s not exactly a bad thing but it just feels odd for a hybrid. 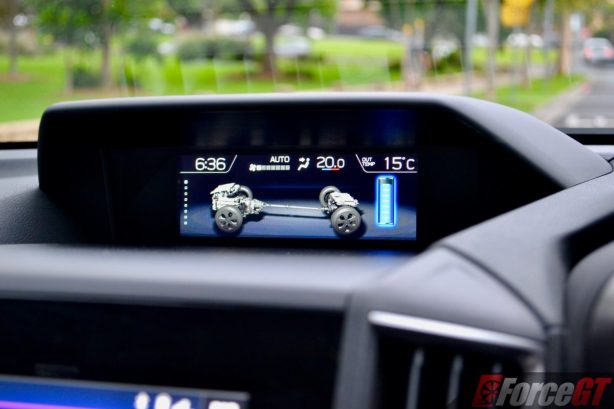 On the move, the car automatically changes between three drive modes: full EV, EV plus engine, and engine driving. In theory, at least, as we find the engine kicks in at almost every throttle application, even light ones. This means the engine would cut in and out more often than desired. It does allow you to drive on electric power, at very low speed for example, but for the most part it won’t be doing that very much.

It’s a rather different story when coasting, however. The engine would cut off at first opportunity when you let off the throttle, improving fuel economy.

Like the rest of the XV line-up, the Hybrid drives through a CVT, which unlike those used in other Subaru models (WRX and Levorg for instance), likes to flare up the revs. With the engine’s peak torque at a high 4,000rpm, this isn’t a surprise as it needs the revs to haul things around.

The engine swings into action almost seamlessly but the fact that it then needs to pile up the revs to dive into its power band means the cut in isn’t as discrete after all. Take into account the frequency of the engine cutting in and out, combined with the elastic feeling of the CVT, this can quickly become quite unpleasant, especially in extended city driving. 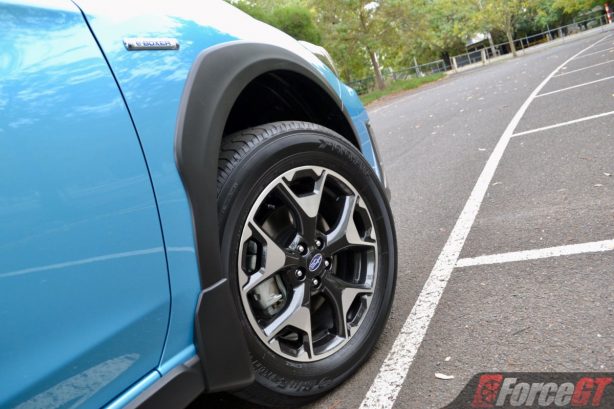 Where the XV Hybrid triumphs over its hybrid rivals is on dynamics and all-wheel drive traction. The position of the battery toward the rear of the car helps front to rear weight distribution and the result is neutral handling with sharp turn-in and impressive composure.

Subaru’s asymmetrical torque-split all-wheel drive is as capable as ever in the hybrid XV, with it affording excellent grip for a very planted and secured handling around corners. Wet roads or slippery surfaces like mud or sand are no dramas, either.

Cruising around town, the ride is smooth and noticeably less busy than its petrol counterpart thanks to the added weight of the battery giving more effective damper compression. Road and wind noise is also well suppressed, even at three-digit speeds.

Fuel economy for the XV Hybrid is rated at 6.5L/100km on the combined average, an insignificant 0.5L/100km advantage over the petrol XV. Our real world reported average of 7.6L/100km isn’t exactly thrifty by hybrid standards, either. But in the longer term, there will still be some accumulated savings on fuel cost over an equivalent petrol or diesel SUV, even if it’s small. 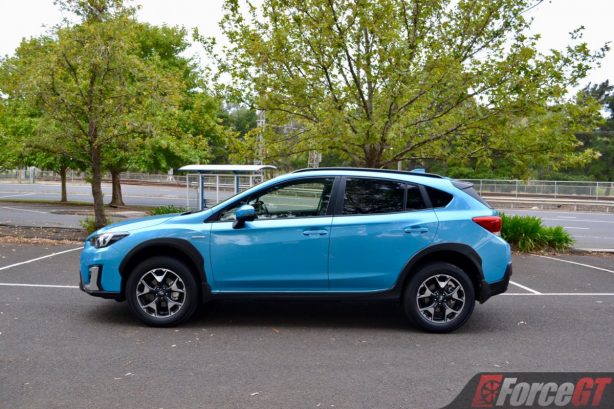 At this price point though, we’d have hoped to also see dual-zone climate control and built-in sat-nav.

The addition of a hybrid variant to the Subaru XV line-up is certainly welcomed, and given the increasing popularity of hybrid cars, a right move for Subaru. Clever packaging means the XV Hybrid has managed to retain the regular petrol model’s outstanding space, practicality and versatility, while offering a slight improvement on fuel efficiency. But is that marginal saving at the bowser enough to offset the XV Hybrid’s higher asking price? We don’t think so.

Previous 2021 Audi RS 3 is as hot as it can get
Next Scooped: 2021 Subaru Levorg caught undisguised!