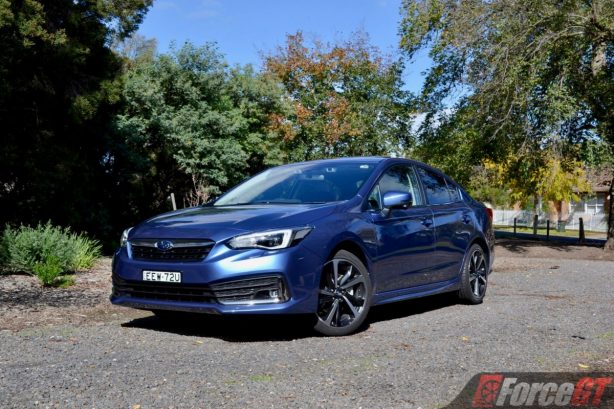 The Subaru Impreza Sedan is probably one of the most underrated small sedans on the market. Its slightly quirky personality and often sedate styling means it gets overlooked for more its more fashionable rivals.

However, few realises that with a few exceptions, the Impreza is one of the longest running nameplates with over 25 years of history behind it. Then there’s the enviable motorsport success in World Rally Championship that gave rise to the high-performance WRX and STIs. It’s also uniquely still the only all-wheel-drive car in its segment.

The latest-generation model was launched in 2017 and three years on, the Impreza Sedan, along with its hatch siblings, has come in for a mid-life facelift.

We were mightily impressed with the latest model when we tested it back then. So, will a spit and polish refresh, updated equipment and revised ride and handling brings out the extra shine on the Impreza?

We were thrown the keys to the range-topping 2.0i-S sedan to find out.

The similarly-spec’d and more practical five door variant is $200 more across the board. 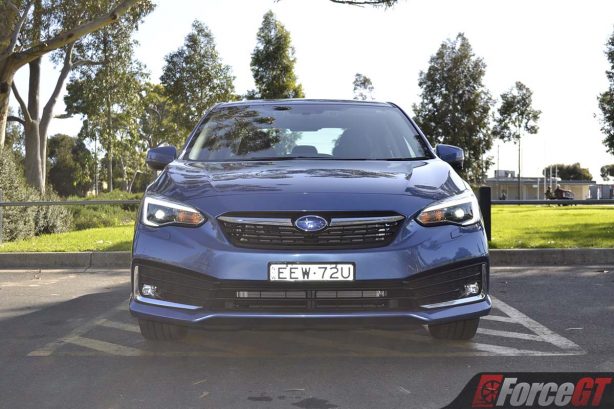 There is not much difference between the updated 2020 model and the 2017 original.

Tweaks are limited to freshly minted model-dependent alloy wheels (18s on the i-S, 17s on the rest) and a better-looking re-profiled front grille, along with an updated front bumper and front fog light design.

It’s still a relatively conservative and boxy design but then again, Subarus are rarely about the designs, with much of its appeal led by its engineering, safety and practicality. 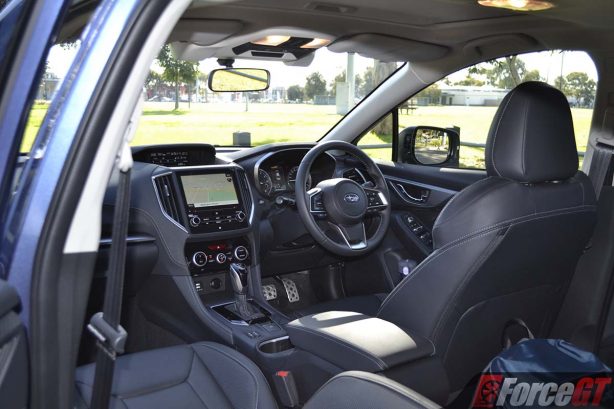 Not much has changed inside, either, with the only visible updates being the updated door trims and a more premium seat upholstery on non-leather clad models to freshen up the interior. There’s not much sense of occasion compared to the interior of say, a Mazda3 or even the Toyota Corolla.

Subaru has choosing to maintain the three separate screens and button-festooned interior that seem to have found a cult following with brand loyalists.

It takes a bit of getting used to initially, as you’re not sure what information goes where but once familiarised, they are actually relatively intuitive to use. The main 8.0-inch touchscreen on our range-topper comes with in-built sat-nav, DAB+ digital radio, and Apple CarPlay and Android Auto connectivity.

The voice control for the sat-nav also work seamlessly, enabling the driver to enter an address much like speaking to your phone. The sat-nav instructions are clear with 3D mapping, and the speed-sign recognition on the screen is handy if you missed them while going past.

It’s also only one of a select few vehicles still to come with a CD player! 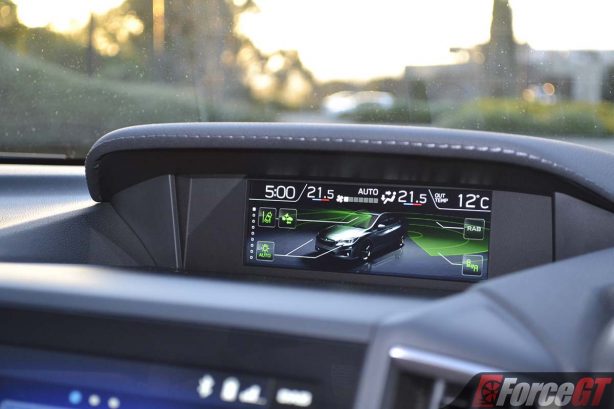 A smaller screen sits atop the main screen and takes care of any car related information such as the trip computer and climate control functions, while a third one in front of the driver provides critical information, along with select trip information.

There are also a total of four USB points and two 12-volts outlets in the first row, although the second row is devoid of any amenities, including the lack of air vents. It is also disappointing that there is no inductive phone charging facility whatsoever.

Being a range-topper, our tester comes with all the mod-cons, including electrical seat adjustment with driver’s memory, a powered sunroof, aluminium pedals and adaptive LED headlights. 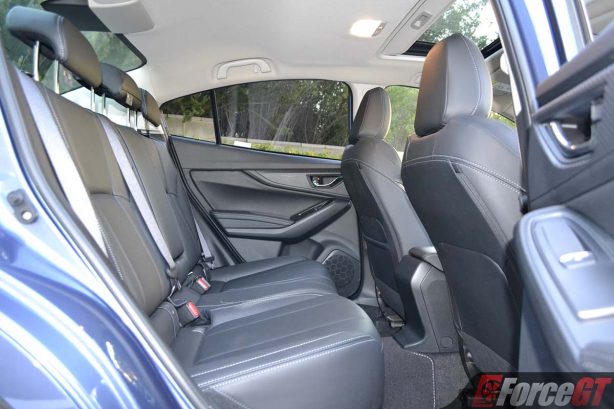 There’s a decent amount of leg and headroom up front, and reasonable legroom at the rear. However, headroom can be a little tight for loftier passengers at the back with the sloping roofline.

Further aback, the boot space is 115L more generous than the hatch at 460L and is expandable to 960L via the 40:60 split-folding rear seat. There’s a space-saver spare under the boot floor.

The Impreza range is equipped with Subaru’s EyeSight driver assist technology with a pair of stereoscopic cameras mounted above the windscreen. It enables features such as adaptive cruise control, autonomous emergency braking, lane-departure and sway warning, lane-keep assist and pre-collision braking. 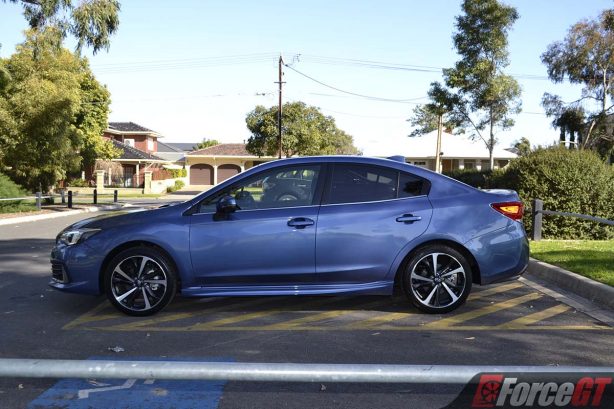 All 2020 models have a driver-selectable SI-Drive engine management system to play with. In the Impreza, the system comes with two SI-Drive modes: Intelligent (I) and Sports (S).

The system defaults to Intelligent where fuel consumption is given priority over responsiveness for everyday driving, with the engine ticking over at just 1,400rpm at the suburban speed limit of 60km/h. For a sportier drive, Sports mode opens up the throttle quicker for a little more urgency.

While the 2.0-litre naturally aspirated flat-four, which is good for 115kW and 196Nm, remains untouched, it’s certainly adequate for daily use. Throttle response is immediate (unlike some turbocharged rivals) even in Intelligent mode and the engine is impressively quiet at cruising speeds.

The dreaded CVT drone is also largely banished although it remains a bit notchy in manual mode as it ‘steps’ through its faux ratios.

Handling is one of the Impreza’s strong points with good body control, a confident stance and amazing grip thanks to its all paw drivetrain. It’s comfortable around town, soaking up ruts and bumps efficiently, while the steering is light yet direct. 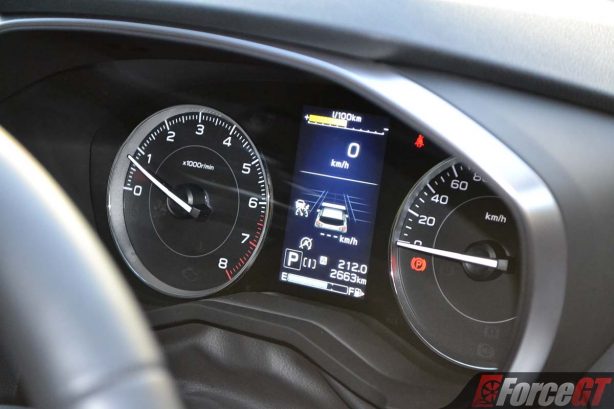 Our weeklong test saw the Impreza’s trip computer returned a reading of 7.8L/100km against Subaru’s claim of 6.6L/100km. While the difference might appear quite large, it’s still a respectable figure and largely in the ballparks of rivals, except of course, for the hybrid Corolla.

The Impreza is covered by Subaru’s five-year/unlimited kilometre warranty, along with five-year capped-priced servicing priced between $350.25 and $784.77 per visit.

There’s a lot to like about the Impreza, including its excellent and unique all-wheel drive system, good handling and impressive safety tech.

However, in a diminishing and crowded segment where presentation and price are major drivers for decision making, has Subaru done enough for the Impreza?

While it’s likeable and comes with Subaru’s trademark reliability and safety, its conservative interior and ageing powertrain yell out for a major overhaul.