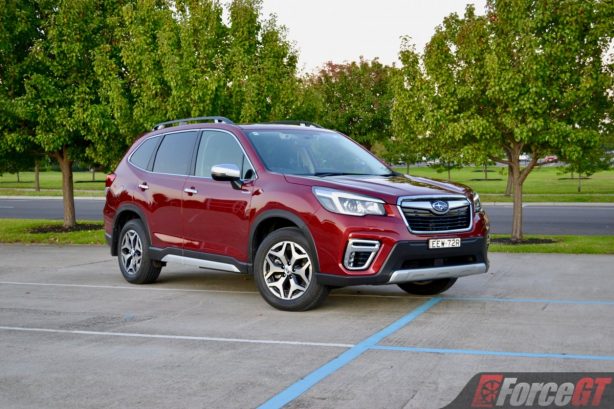 Right from the start, the Subaru Forester has been known for its practicality, durability and go-anywhere versatility. It’s the no-nonsense mid-size SUV that you just get in and go to places. In Australia, it’s been popular among families and adventure seekers for generations. Now, for the first time ever, hybrid technology is offered in the Forester with the promise of improved fuel economy and performance. Together with the smaller XV Hybrid crossover, the Forester Hybrid represents an intermediate step in Subaru’s transition to become a full-scale full-electric vehicle manufacturer over the coming years.

In the mid-size SUV segment, the Forester Hybrid is one of only a few hybrid offerings, with the other players being the Toyota RAV4 Hybrid and Mitsubishi Outlander PHEV. Not surprising, there’s a price to pay for getting the latest technology and the Forester Hybrid fetches a $4500 premium over its petrol equivalent. Prices start at $39,990 for the Forester Hybrid L, while the upper-spec Hybrid S costs $45,990. All prices exclude on-road costs.

Despite the higher sticker price, Subaru has certainly done its homework in pricing strategy. As a comparison, its closest rival the Toyota RAV4 Hybrid is priced at $41,140 for the GXL grade and $44,640 for the range-topping Cruiser trim. On the other hand, the Mitsubishi Outlander PHEV ES comes in at $45,990. It’s quite obvious then that the Forester Hybrid is priced to sway a few buyers away from its fellow Japanese rivals. 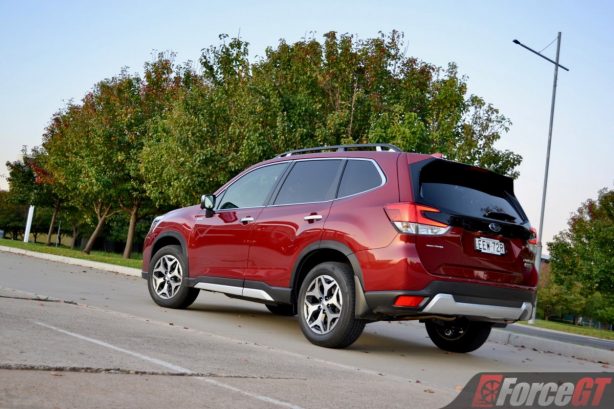 Essentially, the Forester Hybrid’s exterior design is identical to the non-hybrid Forester models save for some ‘e-Boxer’ badges scattered around the vehicle, chrome door handles and silver cladding on the front and rear bumper, door mirrors and side sills. This is a good thing. The conventional two-box design of the Forester has always been about practicality and fit-for-purpose rather than allure or glamour, and it’s good to see Subaru has retained this rugged and adventurous design theme that Forester buyers are so accustomed to. 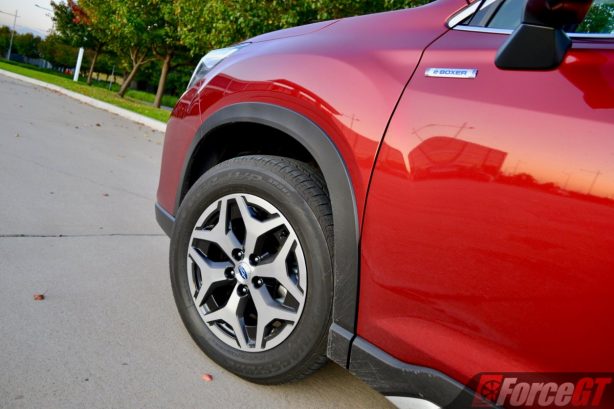 The Hybrid L variant tested here sports the same 17-inch alloys as the equivalent petrol model, while the Hybrid S gets larger 18-inch items with chunkier spoke design that are also shared with its petrol sibling of the same grade.

Active cornering LED headlights are standard across both Hybrid variants, along with front fog lights and roof rails.

Like the exterior, the Forester Hybrid’s cabin is carried over from the regular model unchanged, though a closer inspection will reveal the blue illumination instrument cluster that is exclusive to the Hybrid. A scroll through the multi-information display in the centre of the dashboard will also uncover the Energy Flow screen which gives a real-time graphical animation of energy movement in the hybrid powertrain.

Subaru’s focused on usability and practicality is also evident on the inside, with the cabin sporting a well laid out dashboard and superb ergonomics. Everything is within easy reach and located where it should be. Build quality is impeccable throughout, too.

Our Hybrid L trim level makes do with a rather small 6.5-inch infotainment touchscreen (S model gets a larger 8-inch version) that is still pretty intuitive and supports Apple CarPlay and Android Auto in addition to DAB+ digital radio. For the most connected of families, the Forester boasts two USB ports up the front and another two more in the rear to keep everyone happy. 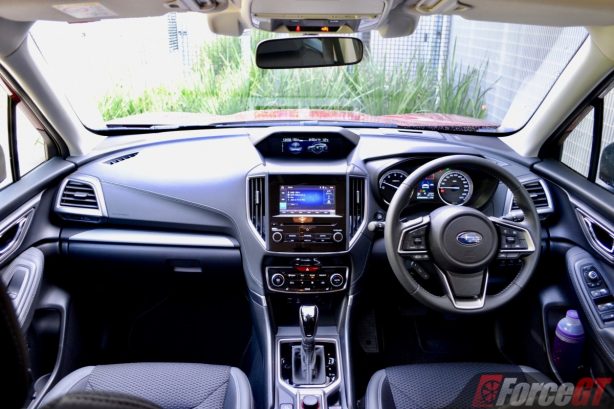 The Forester’s interior space has always been one of the largest in class and the Hybrid is no exception, despite the added complexity of the petrol-electric drivetrain underneath. There’s plenty of leg and headroom in both the first and second row and appreciably padded armrests all around. The vast glasshouse lets in a good amount of natural light, further increasing the airiness feel of the cabin. There’s also no shortage of large storage compartments such as the door pockets, glove box and centre storage under the front arm rest.

Typical of Subaru, the seats in the Forester offer great comfort and support. While leather seats are reserved for the Hybrid S grade, the fabric upholstered ones in our Hybrid L still look great in their two-tone colour scheme. Also a trait of Subaru, all-round visibility from the driver seat is excellent, even in the usually disastrous forward quarter view thanks to the relatively slim A pillar and that small window bracket just fore of the side mirror. 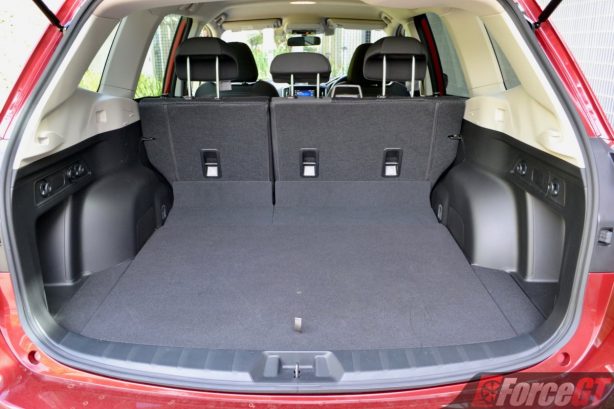 Hybrid models usually have less boot space than their conventional petrol or diesel powered equivalents due to the extra drive batteries under the vehicle. In the case of the Forester Hybrid though, it’s the opposite. Its 509-litre boot is 11 litres larger than that in the non-hybrid Forester, and with the rear feats folded, the resulting 1779 litres of capacity is also exactly 11 litres more. The reason the boot is bigger in the Hybrid is because it does away with the spare wheel in favor of a puncture repair kit – we surely aren’t expecting that from Subaru – and so the whole boot floor could be lowered to free up more space.

Lift the boot floor and you’ll know why Subaru has gone down that path. The battery pack for the hybrid drivetrain is located under the boot and just above the rear axle. There’s absolutely no more space left for a spare wheel, not even a space saver one. Subaru didn’t have a choice, really.

Shared with the XV Hybrid, the Forester’s ‘e-Boxer’ powerplant consists of a 2.0-litre horizontally-opposed four-cylinder petrol engine that develops 110kW at 6,000rpm and 196Nm of torque at 4,000rpm. It’s assisted by a lithium ion battery-powered electric motor that is rated at 12.3kW and 66Nm. The hybrid powertrain is self-charged via kinetic energy captured by regenerative braking and coasting.

Unlike most hybrid vehicles which silently start up in EV mode without kicking over the engine, the Forester Hybrid fires up its cylinders each time on start up. If you drive off right away you will be driving on engine power, but if you leave the car on idle long enough (a minute or two), the engine will eventually shut down and you can roll around quietly at low speed on electric power. It’s not exactly a bad thing but it just isn’t very ‘hybrid-like’. 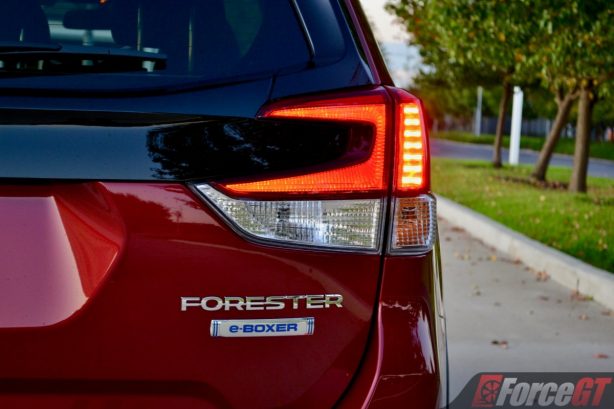 On the move, the car automatically changes between three drive modes: full EV, EV plus engine, and engine driving. In theory, at least, as we find the engine has a tendency to kick in at the slightest throttle application. This means the engine in the Subaru would cut in and out more often than some of the other hybrids we have driven. It does allow you to drive on electric power, at very low speed for example, but for the most part it won’t be doing that very much. We believe this is due to the extra demand from the permanent all-wheel drive system – rivals’ AWDs are mainly front-driven, with the rear wheels engaged only when traction is low.

Things are quite the opposite when coasting. The engine would cut off at first opportunity when you let off the throttle, improving fuel economy. 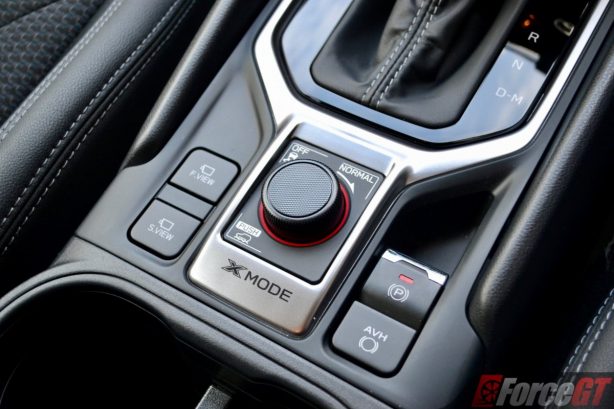 Like the rest of the Forester line-up, the Hybrid drives through a CVT, which unlike those used in other Subaru models (WRX and Levorg for instance), likes to flare up the revs. With the engine’s peak torque at a high 4,000rpm, it does need quite a bit of revs to haul things around.

The engine swings into action seamlessly but the fact that it then needs to immediately pile on the revs to dive into its power band means the cut in isn’t as discrete after all. Take into account the frequency of the engine cutting in and out, combined with the elastic feeling of the CVT, this can quickly become quite unpleasant, especially in extended city driving.

We can see that the electric drive system will instead be a much better match to a turbocharged petrol engine with stronger low down torque. Food for thoughts, Subaru?

Where the XV Forester triumphs over its hybrid rivals, perhaps, is on dynamics and all-wheel drive traction. The regular Forester is already a tidy handler, but the Hybrid’s better weight distribution thanks to the position of the battery toward the rear of the car further delivers a more neutral handling with crisp turn-in and impressive composure.

We are also glad to report that the hybrid tech has not compromised on the much-loved Subaru asymmetrical torque-split all-wheel drive. It’s as capable as ever, with it affording excellent grip for a very planted and secured handling around corners. Of course, wet roads or slippery surfaces like mud or sand are no dramas, either. The instant torque from the electric motor allows the car to crawl dirt tracks on just electric power, with the engine kicking in when things get tricky or the speed increases. 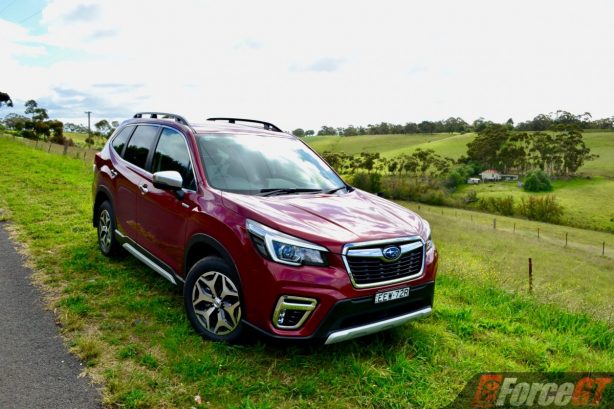 Cruising around town, the ride is smooth and noticeably less busy than its petrol counterpart thanks to the added weight of the battery giving more effective damper compression. Road and wind noise is also well suppressed, even at three-digit speeds.

Fuel economy for the Forester Hybrid is rated at 6.7L/100km on the combined average, an improvement of 0.7L/100km over the petrol version. Our real world reported average of 7.4L/100km from mixed urban and country driving isn’t exactly thrifty by hybrid standards, but in the longer term you should expect to see some accumulated savings on fuel cost over an equivalent petrol or diesel SUV, just don’t expect anything significant.

The Subaru Forester Hybrid retains the regular petrol model’s impressive packaging and easy-to-live-with attributes while delivering slightly better fuel efficiency. But is that marginal saving at the bowser enough to offset the Forester Hybrid’s higher asking price over its non-hybrid siblings? Only if the ownership is long term.