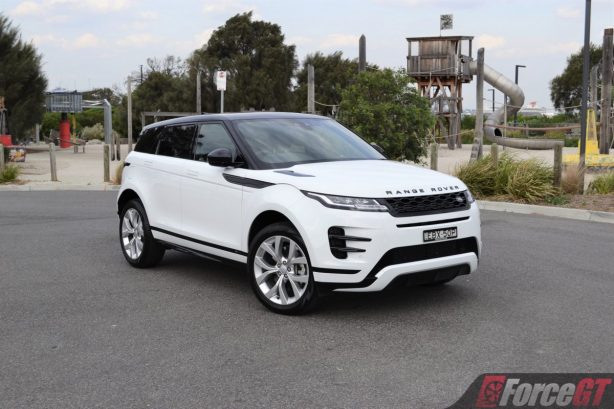 When it comes to sports sedan, there’s the BMW 3 Series. Think sports coupe and the Audi TT springs to mind. As for the premium compact crossover, the Range Rover Evoque gets in the picture. The undeniably fashionable and chic British compact SUV is an icon in its segment, just like the 3 Series and TT in theirs.

First came about in the form of the Land Rover LRX Concept in 2008, the first Evoque went into production in 2011 adopting most of the concept’s striking design. It was one of the coolest looking things on the road – well, except for the convertible version. As posh as it was, it packed a great deal of Land Rover off-road DNA, too. With global sales of over 775,000, it’s one of the best selling models in class.

Naturally Land Rover wasn’t going to mess with a successful formula, so evolution was the approach taken for the second-generation Range Rover Evoque. Available in Australia in 13 different trim levels, the new 2020 Evoque is priced from $62,670 plus on-road costs. Let’s explore it further.

For the new Evoque styling, Land Rover has gone to the Range Rover Velar for inspiration. Compared to the first-gen Evoque, the new model looks sleeker, cleaner and more subtle. Like the Velar simplicity is key and the panel surfaces are devoid of any unnecessary lines and creases, the exterior door handles lie neatly flush in their recessed position, and the rear windscreen wiper is cleverly tucked under the roof spoiler. 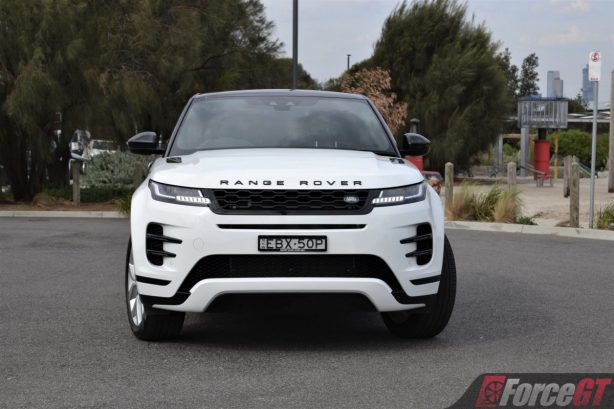 We don’t blame people for mistaking it as a Velar from afar because the front fascia of the new Evoque is indeed quite similar to its big brother. The headlights are almost identical and the grille is just a smaller version. At the rear the joined taillights that stretch the width of the car also look full on Velar.

It’s only from the side that the Evoque looks like an Evoque. The short overhangs and that iconic straight, low roof are all retained, so is the front wheel fender bulge that cuts into the clam shell bonnet.

We do like the new look a lot, especially in the sportier R-Dynamic trim as seen in our test car. And it’s echoed on the streets, too, with it never once failing to turn a few heads wherever we brought it to during our week-long possession. 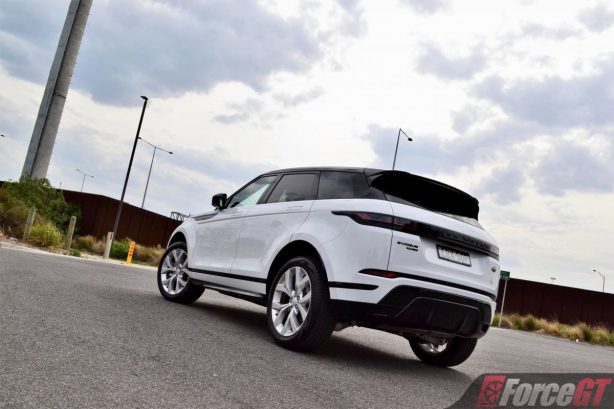 While style is everything in this segment, size matters a great deal, too. Too big and it’s a chore in parking so Land Rover was careful not to swell up the Evoque too much. Unlike other evolutionary cars like the Golf or 911 which often grow in size with each iteration, the new Evoque has only grown a mere 1 mm in length and 11 mm in width, maintaining its compactness for the city where it’s expected to spend most of its life in. The wheelbase has grown some 21 mm though, benefiting interior space (more on that in the next section).

Land Rover has been churning out some truly spectacular interiors lately and the one in the new Range Rover Evoque is no exception. Again heavily influenced by the Velar, the redesigned dashboard integrates uncluttered surfaces and simple lines with carefully curated premium materials to create a luxurious, minimalist and contemporary cabin.

Against rivals such as the BMW X1, Audi Q3 and Volvo XC40, we are inclined to think that the Evoque has the nicest interior of them all. Overall build quality is right up there, too, and a big step up from before with tight fitment and excellent alignment. 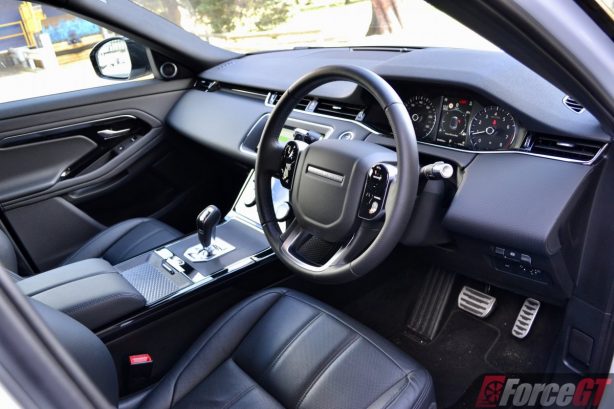 There’re plenty of personalisation options for the cabin including two shades of leather upholstery and multiple trim finishers in wood or aluminium. Upgrade to the quilted leather upholstery (a pricey $4,188 option) and you get to choose from four colours.

Also available are numerous headlining options, along with configurable ambient lighting and illuminated tread plates to make the Evoque truly your own.

In-car technology has been brought up-to-date, with the new cabin featuring as many as three digital displays, four if you include the head up display. All new Evoque models get as standard a 10-inch Touch Pro infotainment system equipped with Apple CarPlay and Android Auto smartphone mirroring for the first time. The infotainment touch screen benefits from faster processing thanks to new updated software, though digital radio DAB+ is still a $400 option – something that is now standard even on a $20k Yaris! 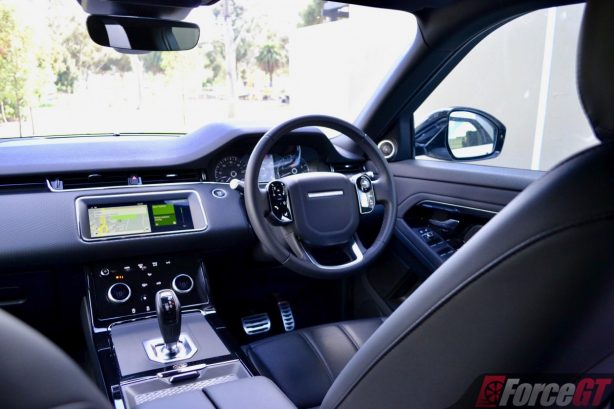 Higher spec SE and HSE models gain Touch Pro Duo ($600 option on the S) which replaces air-con and various driving buttons with a second central touch screen. We have used a similar Touch Pro Duo system in the Jaguar XE we recently drove and found that it isn’t as intuitive as we thought it should be. So, if you’re buying the base spec S variant like the one on test here, skipping the Touch Pro Duo option isn’t going to be much of a sacrifice, as the conventional system works fine and is much less of a hassle.

Behind the updated steering wheel, a full digital instrument cluster is available as a $650 option. While it certainly looks cool and allows for greater customisation, we have our reservations about its reliability as it’s quite prone to crashing if our experience with the system in the past is of any indication. Our tester came with the standard conventional instrument cluster consisting of dual dials and a central digital display, and even this smaller display failed to load up the sat-nav directions on one occasion during evaluation. 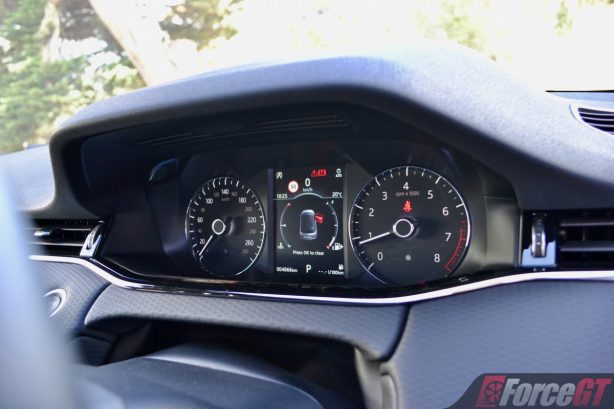 In terms of interior space, the longer wheelbase has contributed to 20mm of extra rear kneeroom and an increase in small item stowage – the larger glove box and centre cubbyhole can now fit tablets, handbags and bottles with ease. But the designers could have better utilised the space around the gear lever for extra storage, as it’s now nothing but a slab of hard plastic trim.

Despite the raked roof line, headroom in the back is adequate for the average adult, and the rear quarter windows let in a good amount of natural light. 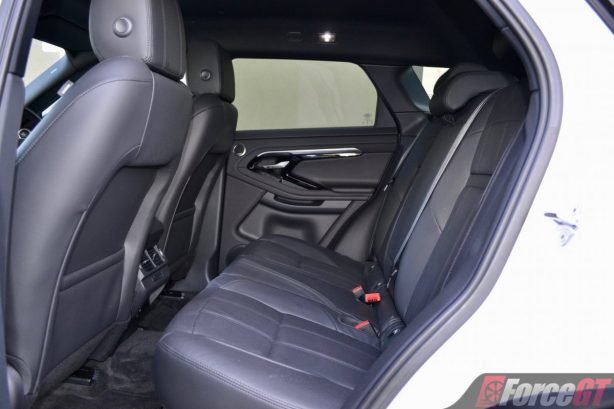 Further out back, the luggage compartment is 10 per cent larger than before, yielding a generous 591 litres. It’s also noticeably wider for easier loading. It can now easily fit a folded pram or set of golf clubs. The boot space increases to 1,383 litres when the flexible 40:20:40 second-row seats are folded.

A $480 option on the S trim, the powered tailgate operates quickly and smoothly.

Land Rover’s new 48-volt mild hybrid MHEV system is fitted to the most powerful petrol variant, the P300, as well as across the diesel range. A plug-in hybrid electric vehicle (PHEV) model will join the range later this year.

The mild hybrid system works by harvesting energy normally lost during deceleration and storing it in the under-floor battery. At speeds below 17km/h, the engine will shut off while the driver applies the brakes. When pulling away, the stored energy is redeployed to assist the engine under acceleration and reducing fuel consumption in built-up traffic area. 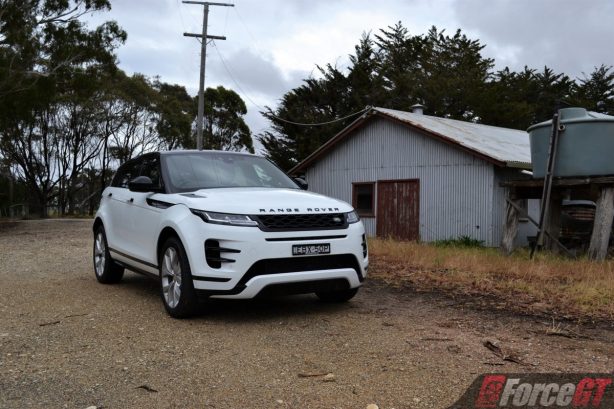 While the least powerful petrol engine in our P200 tester isn’t slouch by any means – it pulls a 0-100km/h time of 8.5 seconds and is still perfectly fine for the daily urban grind – having a full load of passengers and their luggage will see it struggle up a slope or during highway overtaking. The mid-range P250 is the more versatile engine and the sweet spot between value and performance.

Engine smoothness and refinement in our P200 is good, with it making barely a hint on cruise, though the idle stop start is a tad slow to spring back to action. 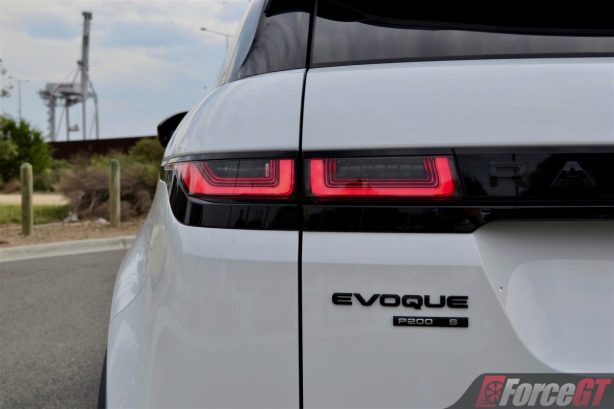 The 9-speed auto the engine is paired with shifts smoothly most of the time, with the exception being when coming to a halt where the downshifts can get a little jerky. The shifts are also not as quick as rivals’ 8-speeder and slow to react to the paddle shifters.

All Evoque models get a clutch-based torque vectoring four-wheel-drive system and a redesigned suspension system with struts up front and JLR’s Integral Link set-up at the rear. Adaptive dampers are optional (which weren’t fitted to our test car).

Being a soft-roader, it’s no surprise that the Evoque has really good road manners. The ride is nicely balanced between ride and handling, certainly smoother than its sister car the Jaguar E-Pace. It has a firm set up for good road feel, yet compliant enough to smooth out bad surfaces. The cabin is well isolated from road and wind noise, too. Contrary to most compact SUVs, the Evoque won’t take it out of you on long trips. 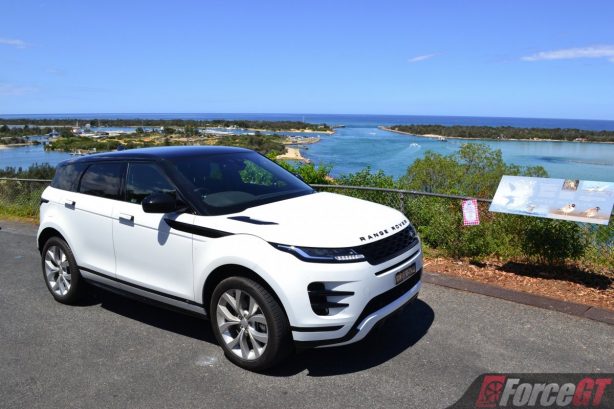 Being a Range Rover, the Evoque does not have to be sporty but it manages to impress around the bends. There’s a new found level of dynamism in this new model that endows it with superbly taut handling and sharp response. The chassis feels beautifully integrated and there’s excellent grip from those Pirelli tyres. You just steer it like a car, and the Evoque will obligingly sort things out. It’s that good.

But a Range Rover needs to be able to get dirty, too, and the Evoque does not disappoint either. The all-wheel drive system sends torque to each wheel individually to control traction on loose terrain such as sand or gravel, making traversing dirt tracks a walk in the park. While it does not have the ability to raise or lower the ride height like you’d be able to in a Range Rover Sport or Land Rover Discovery, ground clearance is still pretty good, so are the approach and departure angles thanks to the short overhangs.

The Evoque P200 is claimed to return an average combined fuel consumption of 8.1L/100km, which seems a bit optimistic. On test with a mix of urban and country driving plus some seat time around our regular twisty test routes, we achieved an average of 9.4L/100km which puts it just below class average.

In a segment where most models look like jacked up versions of their makers’ hatchbacks, the Range Rover Evoque stands out with its handsome and purposeful design. While the Evoque’s looks have always been its major selling point, buyers can now also look forward to a much improved cabin and a more satisfying driving experience to go with that posh exterior.

If only Land Rover could come to their senses and move a few essential features off the Evoque’s options list and add them as standard inclusion, we would have a real class-leader.