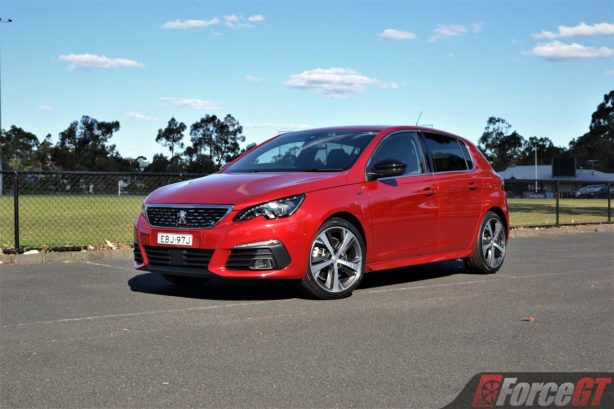 With no fewer than 10 players, the hatchback market is one of the hottest segments in Australia. Buyers can choose from one of the safer (or less exciting) options such as the dominant Toyota Corolla and Hyundai i30, or the more stylish but still common models like the Mazda 3 or Volkswagen Golf. We are literally spoilt for choice.

What if you want something that isn’t like every second car on the road? That’s when you go French and give the Peugeot 308 a look. We did exactly that, spending a week behind the wheel of the 308 GT to find out if this chic European hatch has got what it takes to challenge the top sellers in the segment.

Unlike in Europe, the 308 isn’t such a volume seller in Australia but that didn’t stop Inchcape, the local distributor of Peugeot vehicles from offering the full range of 308 variants here. The line-up spans four models starting off from the entry-level Active at $26,990 to the range-topping GTi hot hatch at $45,990, bridged in between by mid spec variants Allure at $31,990 and GT at $39,990. All prices exclude on-road costs. 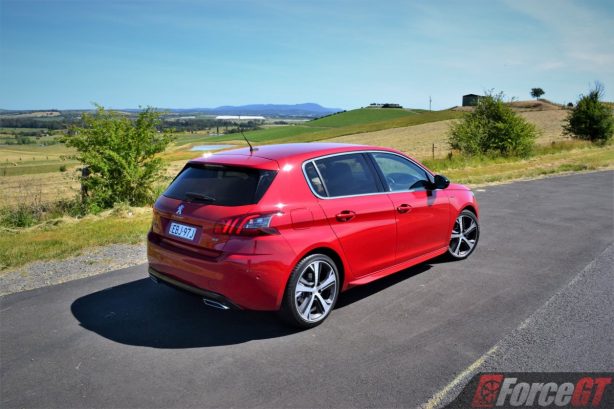 The range isn’t exactly a budget one when compared with less expensive Korean and Japanese offerings, but Peugeot has been pushing upmarket lately following the foot steps of Volkswagen and Mazda and the 308 price structure reflects that.

At just a tickle under forty grand, our 308 GT tester is even priced the same as the Hyundai i30 N and the latter is a full fat performance hatch. Is the French car worth the extra outlay over its more affordable rivals? Let’s dissect it in the next sections.

The current-generation 308 was first launched in 2015 and the passage of time has not dampened its fresh look. It’s a handsome machine, with adequate restraint exercised in its design matched with a good dose of finesse. It looks more premium than mainstream, with no unnecessary clutter or lines and the just right amount of chrome application.

So for its mid-life update Peugeot has been careful not to tamper too much with the already great design, with updates to the exterior headlined only by the new headlight and taillight clusters and revised lower front bumper. 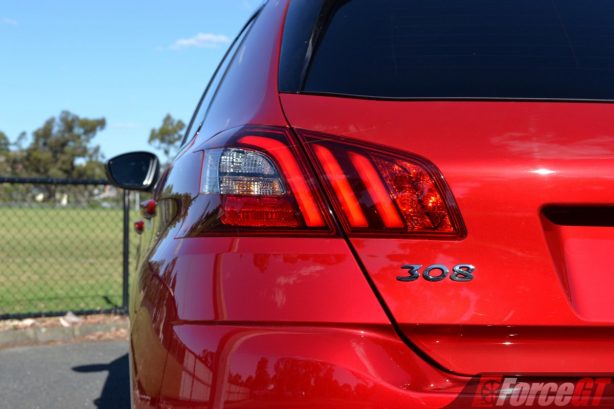 It’s all still very elegant and understated in a good way, with us having just two critics. Firstly, the front fog lamp surrounds would better match the rest of the car if they were also painted gloss black and secondly, those exhaust tips are fake.

The GT rides on eye-catching 18-inch alloy wheels for that warm hatch look and LED is used for all exterior lighting.

Inside is where the 308 truly blows away the competition, except maybe the Mazda 3 and the Volkswagen Golf. Peugeot’s signature i-Cockpit dashboard may not be the most practical interior design but boy does it look fantastic. It consists of a small flat-bottomed-and-topped steering wheel, with the instrument cluster behind placed high up in the dash which, according to Peugeot, negates the need for a head-up display. The gauges are visible to the driver not through the wheel but above it.

Configure your seating position right and they work exactly as what Peugeot says. Whether or not it irks you is a matter of personal preference, we supposed. 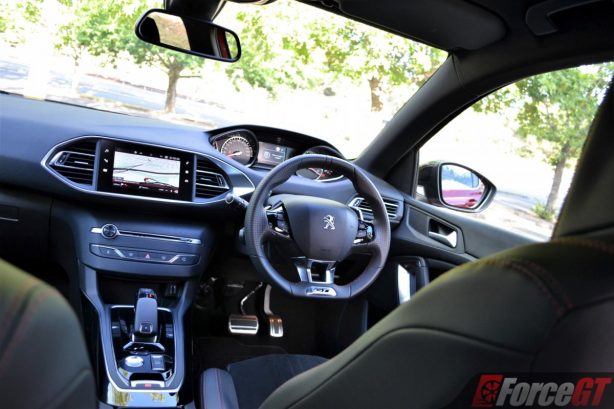 Also part of the i-Cockpit is the large 9.7-inch central touchscreen which is orientated toward to the driver. Instead of a plethora of buttons for the radio and HVAC, the high-resolution touchscreen is the nerve centre that controls everything, from telephone to air-conditioning. It also has Apple CarPlay and Android Auto connectivity.

With the lack of buttons and switches, the cabin does gain a cleaner, classier look. But you’ll have to keep changing screens if you want access to different functions of the car, and the menu structure isn’t the most intuitive, adding to the frustration. 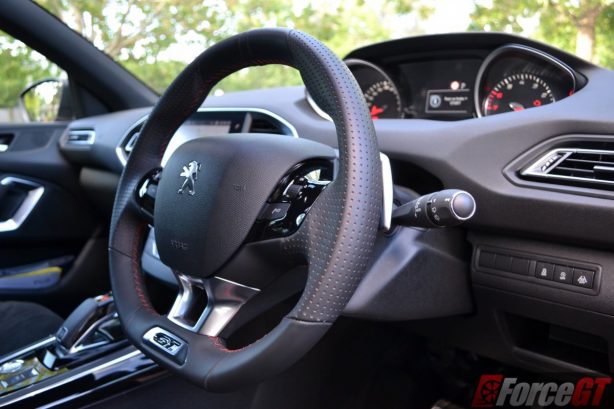 You will find French quirkiness in other parts of the interior, too. The cruise control stalk for instance, is mounted behind the steering wheel and hidden from view completely. You will have to memorise the buttons and rely on your sense of touch every time you use them. Elsewhere, the centre cup holders are awkwardly located behind the shift lever. Place a tall bottle in there and it will obstruct the centre console buttons.

Despite the lack of common sense in certain areas, we totally dig the 308’s interior. The minimalist layout is cool and the materials ooze quality. Most upper surfaces are soft to the touch and their texture is dark and rich. Polished aluminium inserts dotted around the cabin serve to lift up the vibe and add to the overall premium feel. 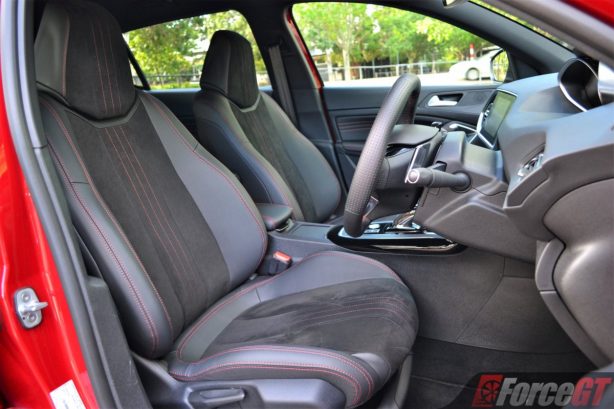 It’s easy to get comfortable in Peugeot’s latest hatchback. The sport seats in our GT are well padded and provide good support, while there is plenty of head and legroom for both front and rear passengers. For this price point, the lack of rear air-con vents is questionable though.

Further back, the 435-litre boot is one of the largest in the segment and comes with a low loading sill and wide opening that makes loading large items a breeze.

While the lower spec Active and Allure models are powered by a small 1.2-litre turbo 3-cylinder engine, the GT ships with a more powerful 1.6-litre turbo four. It develops 165kW at 5500rpm and 285Nm at 1750rpm. That’s good power, certainly one of the highest outputs in class. And you’d expect such a highly strung engine to compromise on refinement, but no, it’s smooth all across the rev range. The soundtrack at the top end isn’t too shabby, either. 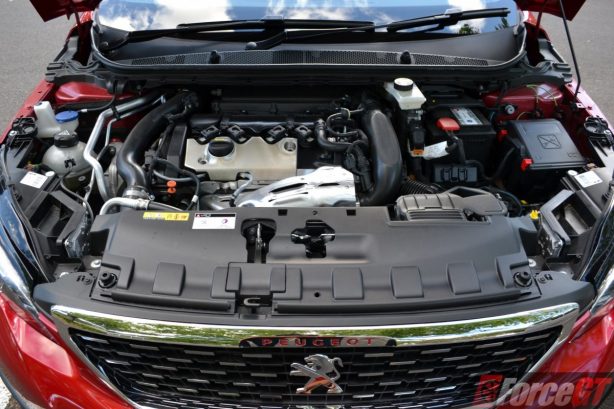 A new torque converter 8-speed automatic debuts with this update and it can’t be a better match to the gutsy 1.6L turbo. Serving up slick and quick gear changes, the 8 speeder extracts the best from the turbo engine to allow for a claimed 0 to 100km/h sprint time of 7.5 seconds, swift enough for every day driving.

If you’re expecting a bit of noise from the back, you’ll be disappointed as it’s fairly muted. But then again this is not a GTi and it’s not supposed to sound like one. 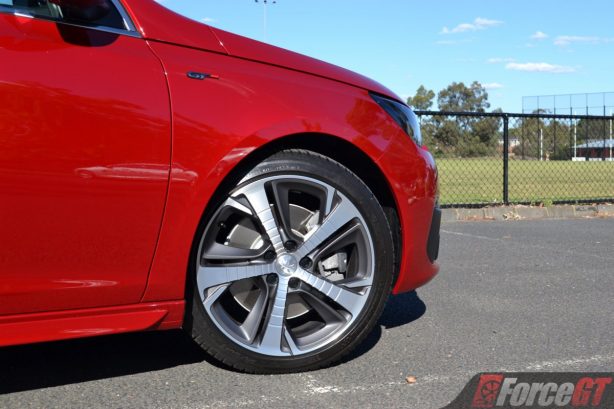 Tipping the scale at a lithe 1,204kg, the 308 GT has a lower ride height compared to regular 308 models, sitting 7mm closer to the ground at the front and 10mm at the rear for a sportier stance. Its spring and damper rates have also been stiffened by 20 percent. It does all add up to a sporty but not uncomfortable ride. It’s firmer than most vanilla hatches, affording good road feel, yet compliant enough to effectively round up bad surfaces.

It feels taut and solid, in other words, very European. With the drive mode in Standard or Eco, the engine is suitably relaxed though you’ll have to deal with that slight initial turbo lag on take off. Once on the move, the chubby mid range translates to relatively effortless acceleration and overtaking, both in urban and country settings. 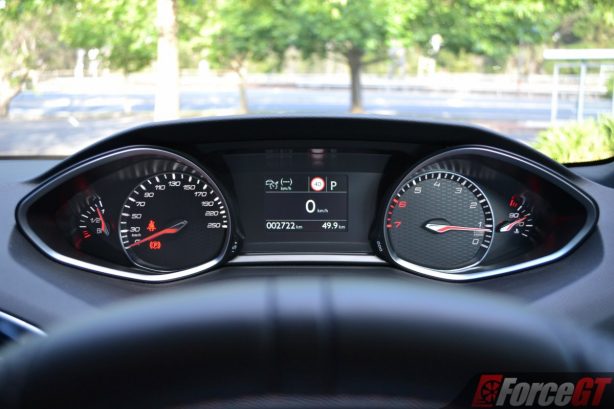 Flick to Sport mode and the transmission becomes crispier and holds a gear for longer, the steering firms up slightly and the throttle sharpens. The instrument cluster also turns angry red. It’s now in warm hatch mode and can be a lot of fun around challenging back roads. The handling is tight and grip levels are high, with it stringing corners with excellent composure and precision.

But the lack of aural drama, both from the engine and exhaust, means the GT is still nowhere as engaging as the GTi. For the full driving experience you’ll need to step up to its more performance focused sibling. 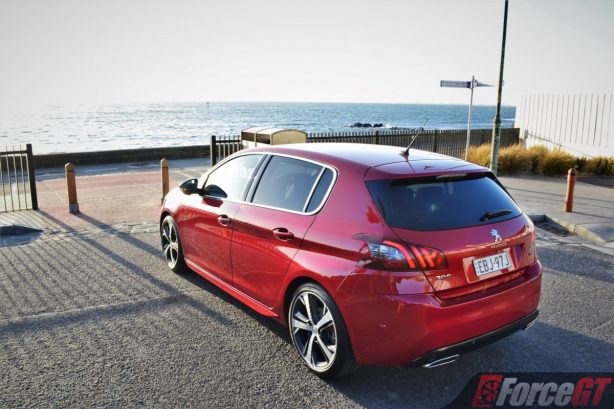 The 1.6L turbo four is one of the more efficient engines we have sampled, averaging a very respectable 7.2L/100km at the end of our week-long test, even after some good prodding at the twisties. On the freeway its fuel use hovers around 5.0L/100km, making it an economical long distance car. On paper, the 308 GT is rated at 6.0L/100km on the combined average. It does, however, chews on premium RON 95 fuel.

Like most brands these days, Peugeot offers a five-year, unlimited-kilometre warranty, along with five-year roadside assist. While capped-price servicing isn’t yet available, the 308 GT costs around $660 a year to service, totaling $3300 over five years.

The Peugeot 308 GT is not a budget offering, but with the premium outlay you get a classy hatch with a stunning interior. It’s also one of the more sporty hatches on the market with a sweet turbo engine and tight dynamics. As far as the warm hatch brief is concerned, it looks like the 308 GT has managed to tick most of the boxes.