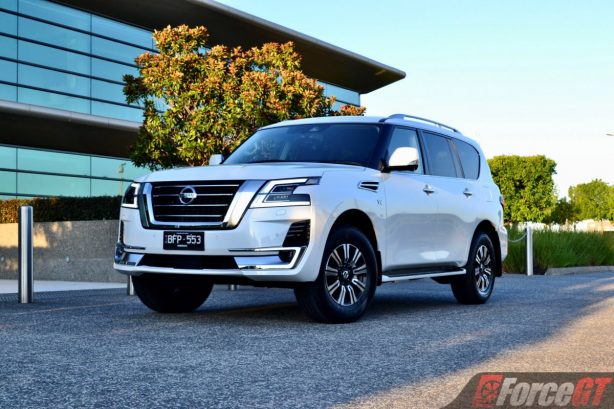 Since its inception in 1951, the Nissan Patrol has built up a tough and rustic image that has propagated through six generations. Wait, what? The current Patrol is only the sixth evolution of the nameplate since the 50s? That’s right. On average, we get to see an all-new Patrol once a decade.

The current model was launched in 2010 and has soldiered on for 10 long years. Even going by the Patrol’s slow moving time, we should be seeing a new model now. But no, the Y62 Patrol is not looking to be replaced anytime soon, as Nissan has given it a mid-life update (yes, 10 years into its lifecycle) taking it well into borrowed time.

Nevertheless, is the nip and tuck enough to give the Patrol a couple more years to live? That’s what we are here to find out. 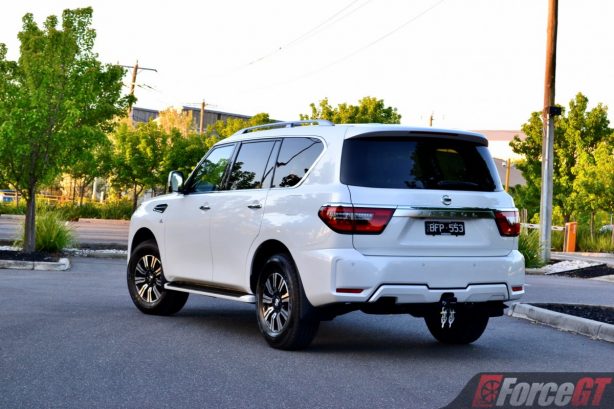 In Australia the updated 2020 Nissan Patrol is offered in just two variants – the $75,990 Ti and the $91,990 Ti-L. Both stickers are before on-road costs. Compared to before, the new prices represent a $6,000 hike for the Ti, and $5,000 for the Ti-L, though Nissan was quick to justify that the price increase was accompanied with a host of added features and refinements.

Considering pricing for the Patrol’s closest (and equally aged) rival, the Toyota LandCruiser Series 200, starts at over $80k and stretches to nearly $120k, and a similarly spec’ed Land Rover Discovery is north of $110k, the flagship Nissan SUV is still the least expensive heavy-duty adventure machine currently on sale.

Having undergone a subtle (barely noticeable) update in 2015, the latest refresh is the second time the Patrol has gone under the knife. This time around though, the changes are more profound. The front has been totally restyled, complete with a new grille, bumper, headlights and bonnet.

While the base-spec Ti grade, like the pre-updated model, still maintains a restrained front-end styling, the range-topping Ti-L grade boasts a distinctive front bumper with lower lip and lots of chrome and silver bits. With so much road presence head on, it’s hard to miss the Patrol Ti-L. 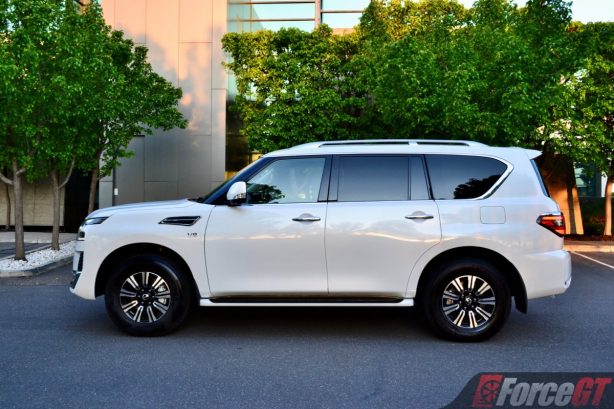 In contrast to the major exterior facelift, the only update to the interior is the air conditioning system, which is said to improve airflow, particularly for rear passengers. It’s certainly a missed opportunity as the aging cabin is desperate for an extensive overhaul to stay competitive. 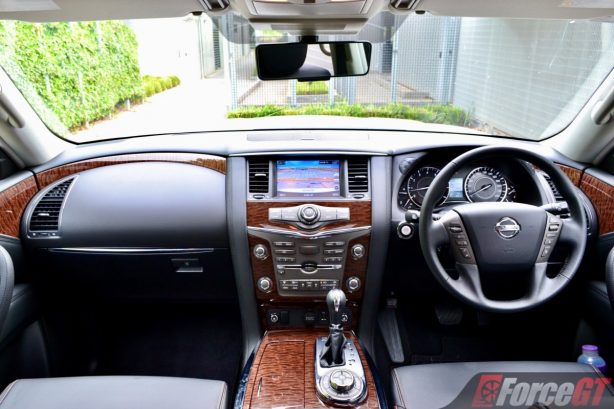 The lack of update on the inside means you’re still stuck with that drab infotainment system with outdated graphics that has yet to support digital radio and Apple CarPlay and Android Auto. The centre console is still a button galore, and the cumbersome foot operated parking brake has been carried over as well. Even the monotoned driving information LCD in the instrument cluster that has been around for decades was made to soldier on.

Nissan has all the new interior tech and it’s being deployed right across the line-up. Unfortunately, the updated Patrol isn’t getting any of them, which just seems odd.

Rounding up the 2020 update is the retuned suspension with improved dampers for a more comfortable ride.

Despite the lack of update to the interior, the Patrol’s cabin remains one of the largest, plushest and most comfortable in the segment. It’s truly expansive with more than ample room for all passengers, even for those seated in the third row. The seats are ultra sumptuous, with the front heated and ventilated.

Climbing in and out is easy thanks to the side step and vast door opening. Third row access is a breeze, too, as the second row seats fold forward liberating quite a wide passage through to the back. 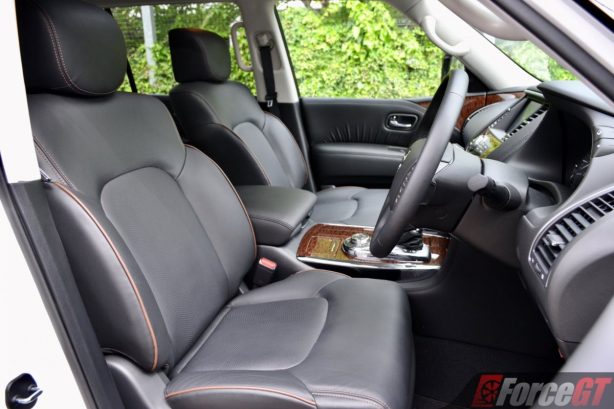 There’s a lot of leather inside, with the seats, door trim and centre console all covered in the cow hide. And while the extensive polished wood trim may not be to everyone’s liking, there’s no denying the warmth and lavishness the cabin presents to its occupants. Build quality is that typical Nissan robustness and precision, as well. It’s just a shame that Nissan hasn’t given it the update that it deserves.

Granted, our top-spec Ti-L grade is laden with quite a bit of toys, including tri-zone climate control, sunroof, 13-speaker premium Bose surround sound system, rear entertainment with twin screens, cool box, powered tailgate, heated and auto folding door mirrors, and an ‘intelligent’ rear view mirror which allows you to choose between a conventional mirror view and one fed from a rear facing camera. The latter provides a wider angle view of the rear for improved rear visibility. 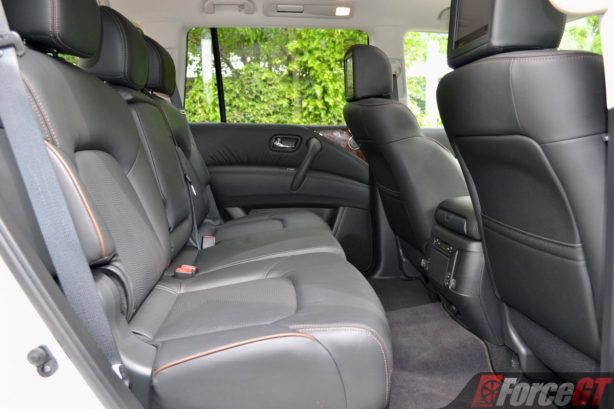 It’s again much the same as before under the skin. There’s still the big petrol-powered 5.6-litre atmospheric V8, producing a meaty 298kW and 560Nm, paired to a seven-speed torque converter automatic and a proper dual-range four-wheel drive system.

The bent-eight remains the highlight of the Patrol’s drivetrain. It’s quite simply the smoothest, silkiest and most refined V8 we have ever driven. It’s a meaty, muscular unit with plenty of low-down grunt for truly effortless acceleration. 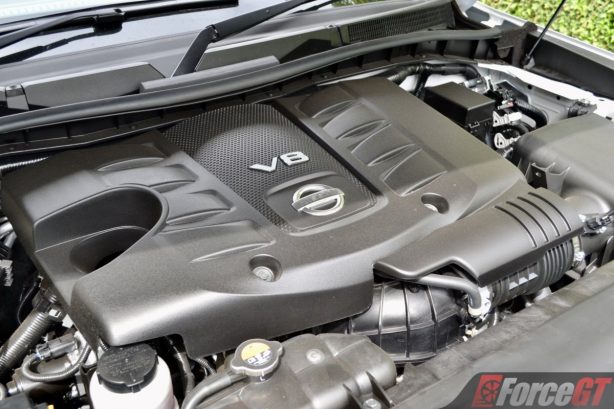 Despite weighing over 2.7 tonne, the Patrol is no slouch, pulling hard and riding on waves of torque as soon as you stomp on the pedal. The throttle is responsive, and the seven-speed self-shifter feels well paired to the V8.

The steering remains overly light though. While it does make the behemoth easier to steer at low speeds, it tends to feel a bit loose at highway speeds, requiring more attention channeled to the wheel at times to keep the vehicle in lane. 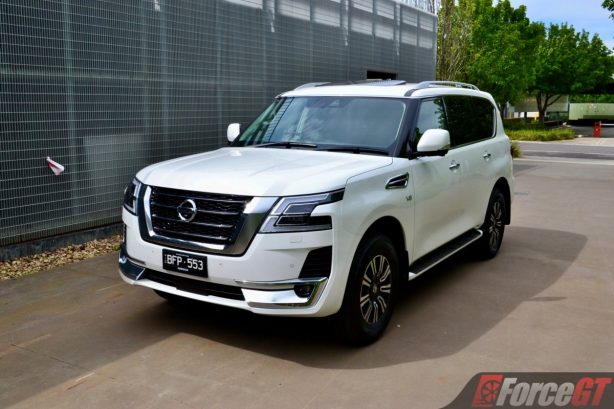 For such a large and tall SUV, it’s no surprise the Patrol rolls a bit around corners, though it remains composed and secure for the most part. The handling is not in any way sporty, but this is a family SUV that is more at home on the open road than any backroad. It’s a vehicle you hook a caravan to and head out to your favourite campground (it has a 3.5-tonne towing capacity).

And should you need to work through some dirt, the Patrol has got that covered, too. With selectable drive modes to suit different terrains, a low-range transfer case and a lockable rear diff, the Patrol carries some serious off-road prowess. Good ground clearance helps with negotiating big dips, while four-wheel traction tackles loose gravel with ease. All backed by that powerful and hardworking V8.

For serious off-roaders, it’s worth noting that the Ti spec is the better option given it has better approach angle due to the different front bumper design. 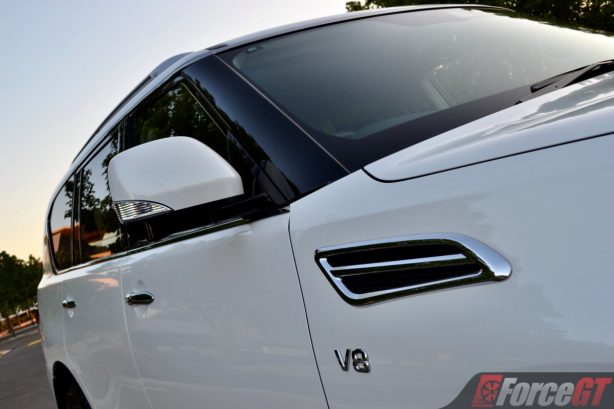 On the road, the revised suspension is the single biggest improvement over the previous model, with it delivering a much improved ride quality over corrugated surfaces. Where the previous Patrol felt jittery and unsettled on bad tarmac, this updated one truly irons out bumps with aplomb. This makes the Patrol brilliant for long distance cruising.

As expected, the big V8 does have a bit of a drinking problem. While the claimed combined rating is 14.4L/100km, the number showing up after a week with the Patrol comprising a fair amount of urban driving, freeway cruising and some off-roading thrown in was an indicated 16.9L/100km. Even sitting on cruise control at legal freeway speeds with no air-con running, it hardly gets below 10L/100km. Yup, this thing is thirsty.

The fact that it only accepts premium 95RON fuel doesn’t help either. Were there a diesel option though, it might be a different story.

It also needs a visit to the dealership every 10,000km or 6 months, whichever comes first, where most modern cars and SUVs have moved on to longer 15,000km or 12 monthly servicing. It does come with a lengthy 5-year unlimited kilometre warranty but all in all running one of these is still no cheap undertaking.

It turns out that the latest update to the Nissan Patrol is focused mainly on cosmetics, with a subtle suspension tweak for better ride comfort.

For sub-$100k however, the 2020 Patrol remains one of the best value go-anywhere, carry all and tow anything recreational SUVs you can buy today.

If there was even a slight improvement to engine efficiency and the interior, the Patrol would have elevated to an even stronger proposition.