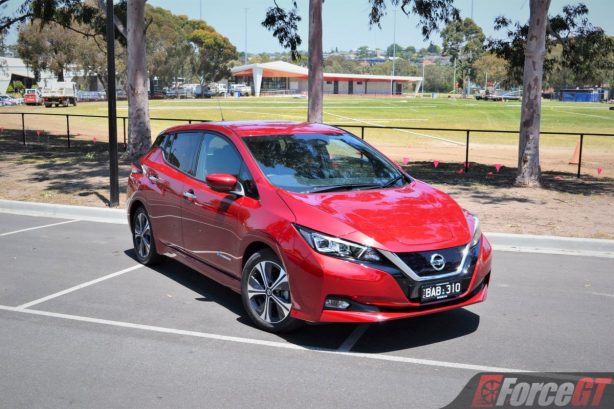 The Nissan Leaf is the Corolla of the electric vehicle (EV) world. It gets you from point A to point B in the most practical, sensible way. It’s not very interesting to look at. And it’s cheap to own and run. Yes, Tesla’s are cool. Yes, the Hyundai Ioniq does the same thing. But the former is expensive and the latter is only in its first generation.

The Leaf though, is now in its second generation – the only EV in the world to have progressed to an all-new second iteration model – after the first became the world’s best-selling EV. If the future is electric, then theoretically, the Leaf could well be this decade’s most important car – for the masses that is.

In Australia, the Leaf is available in a single high-spec grade priced at $49,990 plus on road costs. So, without further ado, let’s check it out. 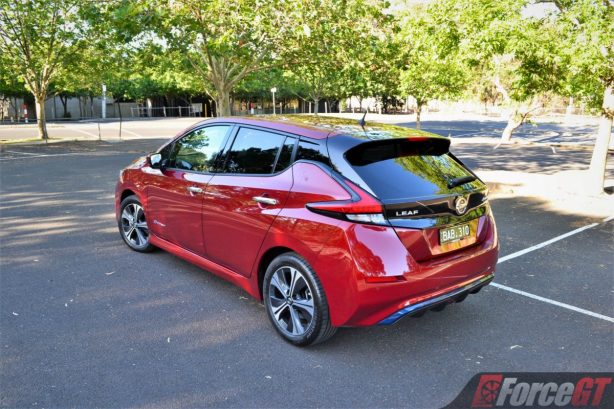 If it’s not for the ‘Zero Emission’ badging at the back and on the sides of the car, you’d have no clue that this car does not have an engine under the bonnet. The Leaf looks just like any other normal five-door hatchback. And the design of this new model is heaps better than the old one, which seemed to have been styled by someone obsessed with frogs.

The new front fascia has that familiar Nissan V Motion grille, flanked by a pair of swept back headlights. The rear has quite a fair chunk of glossy black plastic bits at the bottom of the rear windscreen, though the boomerang taillights that sandwich it look pretty cool. Being a full EV, exhaust tips are nowhere to be seen. 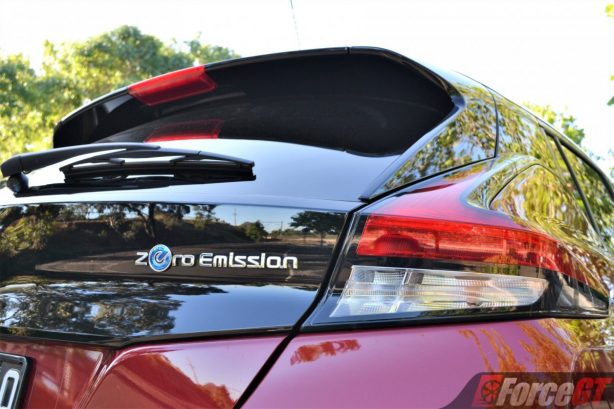 The side view is generic, with the exception of that sleek floating roof effect offered by the blacked out C pillar. Locally delivered models get 17-inch alloy wheels as standard.

There are also full LED headlights with automatic high beam. LED is also used for the daytime running lights and turn indicators.

Like the exterior, the Leaf’s cabin is mostly conventional. If you jump from a petrol-powered car straight into the Leaf, it won’t take you long to work everything out and within a minute you’ll be on your way.

The dashboard is well laid out, with most controls located where they should be and within easy reach. Those familiar with the Nissan range, or Japanese cars for that matter, will notice that the Leaf’s indicator stalk is oddly mounted on the left-hand side of the steering column, as opposed to right-hand side in most Asian cars. That’s because the Leaf is built in Nissan’s United Kingdom factory. Not that there’s anything wrong with that. 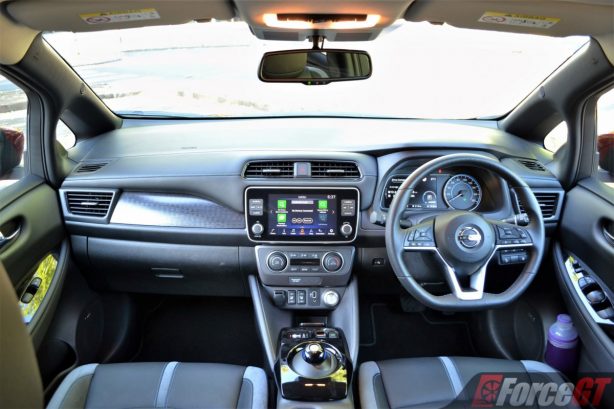 As mentioned, the Leaf operates nearly the same as a conventional car, from the steering to the pedals, with the slight difference being the gear shifter. There are still the usual Drive, Neutral, Park and Reverse modes, but there’s an extra Brake mode which maximises brake regenerative – a technology that harvests energy from the brakes during braking to recharge the drive battery (more detail later). Most of the time for most people however, there’s no need to activate the Brake mode, which in essence makes the Leaf drive just like a normal car.

Nissan makes some of the best car seats in the business and those in the Leaf are no exception. They are comfortable with good support, but there’s bad news for the driver – the steering column doesn’t adjust for reach. While this wasn’t an issue for us as we still managed to find a comfortable driving position using the steering height and seat adjustments, there will be some (tall drivers for example) who will no doubt welcome a reach adjustable rack. A bad cost-cutting move by Nissan. 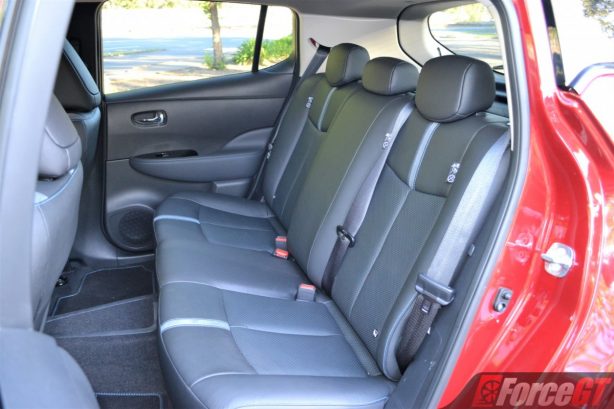 The Leaf’s cabin is as spacious as a small hatchback can get. There’s plenty of legroom for rear passengers and the Leaf’s tall passenger cell means the headroom is just vast. Pop the tailgate and you’ll find a decent boot with 405 litres of capacity, although some of the space is taken up by the Bose amplifier and charge cables. You can leave the cables in your garage if you know you won’t need to use a charge point during your trip but the audio hardware is fixed firmly in the boot. Older owners will also have to beware of the boot’s high loading lip.

Surprisingly, being a high-spec grade it only has single zone climate control, though it does net heating for the front and outboard rear seats. 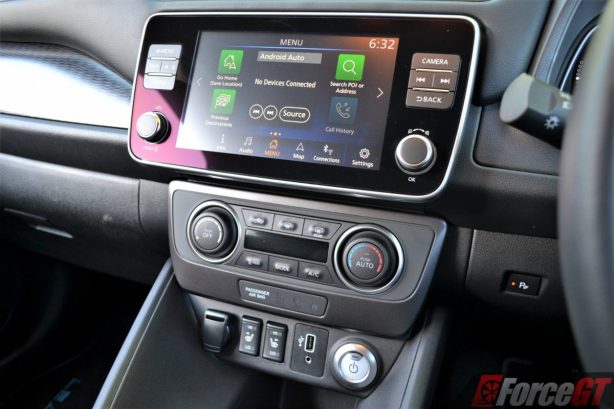 Pop the bonnet and instead of an engine you will find the electric drive motor. Drawing energy from the 40kWh lithium-ion battery stored under the floor, the powertrain serves up 110kW of power and a tout 320Nm of torque to the front wheels.

The motor is the same as before but it gets a new inverter which explains the 30kW increase in power and 40Nm rise in torque over its predecessor. That’s a big jump, one that allows the new Leaf to sprint from 0 to 100km/h in a very respectable 7.9 seconds. Just beware that constant hard acceleration will not only deplete the battery quicker but also make it hot. 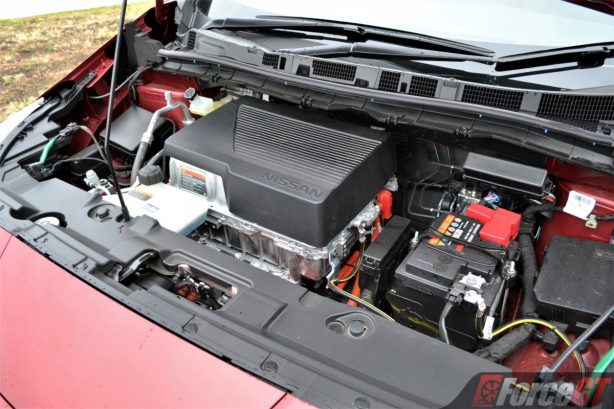 One of the biggest gripes facing electric cars today is charging time and the Leaf faces the same problem. Charging using a conventional home wall socket, a flat battery takes up to 24 hours to get to full charge. For real world usage however, most owners will never deplete their battery level to less than 10 percent and charge beyond 90 percent. This is in fact, the recommended battery life prolonging charging pattern and will take around 15 hours to charge.

For quicker charging, owners can opt to install a 7.2kWh for around $2000 which will drop the charge time for a nearly depleted battery to around 7.5 hours. Charging at home based on the current average energy prices, Nissan claims it will cost around $700 a year at peak times, or just $300 at non-peak. Expect a much lower cost if you have solar panels.

Take it to one of those shopping mall fast chargers (such as Chargefox) a full charge takes only about an hour. 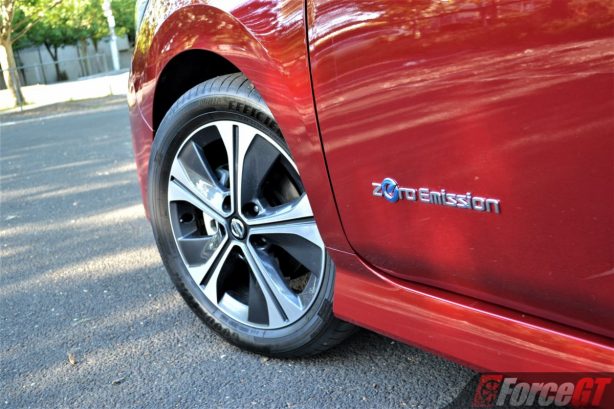 Now the most important question is what is the range? With a full charge, the Leaf is claimed to be good for 270km based on the WLTP combined drive cycle, which is more than enough for the return trip to work plus the school runs. In the real world you will see closer to 250km with the air-con and radio on but that’s still a good range for a city car.

Being an EV, the Leaf is quiet and relaxing. The most you will hear is slight wind and road noise. With no transmission other than a reduction gear, the drive is remarkably smooth and serene. The 320Nm of instant torque from the electric motor is plentiful for a compact hatchback and you’d expect it to shove you in the back the moment you press on the accelerator, like some electric cars (Tesla especially). But no, the power delivery builds up nicely and linearly so there’s no worry of a whiplash.

Once on the move, the power and acceleration is always there when you need it, even at three digit speeds. Overtaking is swift and easy, highway merging is effortless and uphills aren’t an issue. 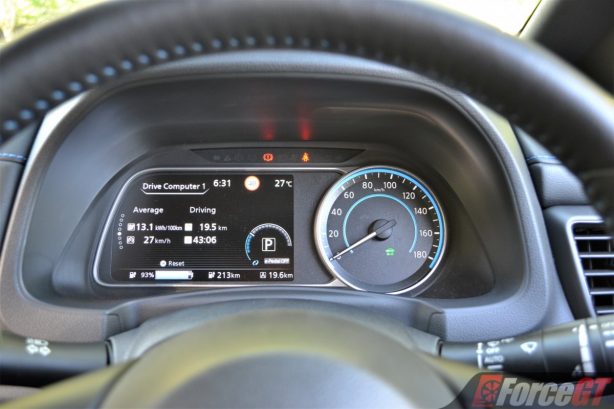 Because the Leaf is able to so precisely control its torque and maintain traction, it feels calm even in the bends. Given it’s a relatively lofty hatch, there’s no escaping that body roll but the everything pulls together nicely and neatly around corners. The steering is sharp and precise, too, if not too light and almost completely void of feedback.

But who takes a Leaf up a twisty back road? This thing is most at home in the city, where its plush suspension compliantly rounds up bad road surfaces and its electric drive quietly hauling occupants around. 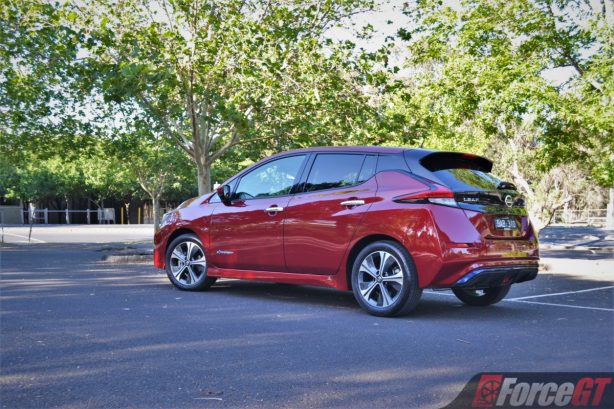 One weird (or fun) way of driving the Leaf is using the fancily named e-Pedal. It’s essentially a feature that when activated, winds up regenerative braking. Take your foot off the throttle and the car harvests the energy from coasting to replenish the battery, slowing the car as if the brake pedal is pressed. It takes a bit of getting used to, but you can literally drive the car with one pedal – the throttle.

The Nissan Leaf comes with a factory five-year unlimited kilometre warranty and an eight-year or 160,000km warranty on the battery.

Nissan’s formula for the second-generation Leaf remains the same, and that is to create a full electric city car that is simple, practical and affordable. It worked for the first-gen Leaf, so there’s no need to mess with success. With the new model, Nissan has instead focused on fine tuning and the result is a more stylish Leaf that is better to drive, more spacious and with a greater range.

The caveat is whether it’s worth paying more for the Leaf over a regular, similarly sized petrol alternative and rely on a charging infrastructure that isn’t quite yet mature.