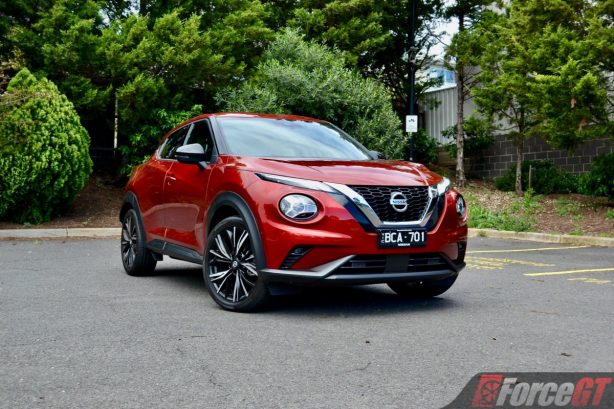 The first generation Nissan Juke didn’t quite resonate with small crossover buyers, despite being one of the first to launch into the segment. Its quirky design was a like it or hate it affair, and with an uninspiring CVT auto it wasn’t the best to drive either.

That was 10 years ago, where the compact SUV class was still at its infancy with only a handful of players. Fast forward to 2020 though, the landscape has completely changed. Today, nearly every major manufacturer has a representative in the segment, and Nissan has better upped their game to stay ahead.

That’s exactly what they have done with the all-new second-generation Nissan Juke. Top to bottom, it’s a vast improvement over the previous model with a fresh new look, revamped drivetrains and new found dynamics.

Australian pricing before on-road costs for the 2020 Nissan Juke starts at $27,990 for the entry level ST grade, working its way up to $36,490 for the range-topping Ti. This places the Juke head on with key rivals such as the Mazda CX-3, Hyundai Kona and Volkswagen T-Cross. 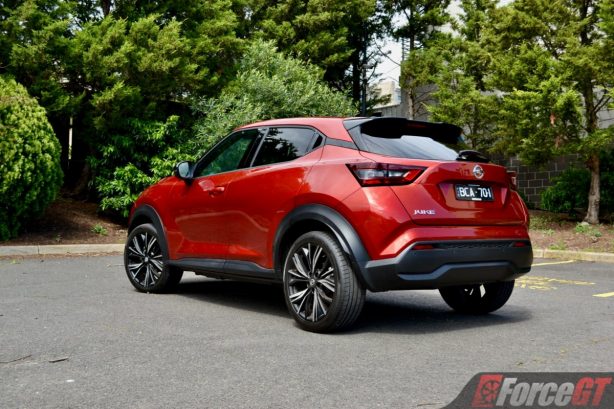 In a segment aimed at younger buyers, style plays a big part in the decision making process. Amongst the Juke’s many new appeals is the way it looks. Gone is the oddball design of the old and in its place a much more attractive styling.

Granted, it still looks quirky, but this time around the design flows and the elements blend together well. The front is instantly recognisable as a Juke thanks to those round headlights and separated daytime running lights, with the short overhang in the rear only adding to that Juke identity. The hidden rear door handle is another nod to the original.

But that’s about all there is for similarities with the old model. The new Juke has much stronger lines and way better proportions, with the tapered floating roof and flared wheel arches setting off a truly athletic stance. 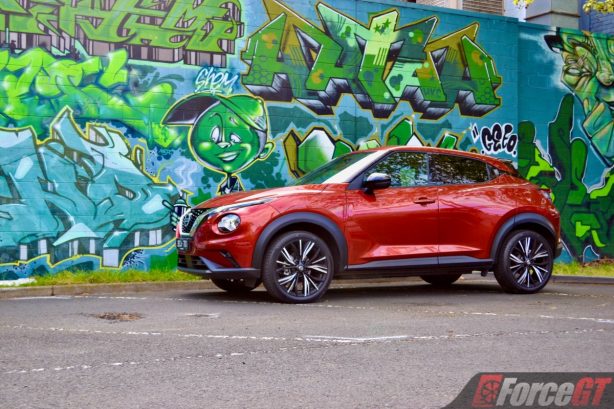 Our tester is the range-topping Ti variant which rolls on huge 19-inch wheels with low profile tyres. Though lesser grades have smaller wheels, the big shoes say everything about the Juke’s designated habitat, which is strictly urban.

There’s more to like in the Juke’s new interior. Not only is it larger in all dimensions, it’s also funkier and more upmarket. The round air vents are playful, the infotainment screen is huge, and the lavish use of suede trim (Alcantara with ambient lighting in the Ti model) throughout give a sense of richness and quality that we don’t often see in this segment. The illuminated Juke logo on the front door kick plates further adds a premium touch (Ti model only). 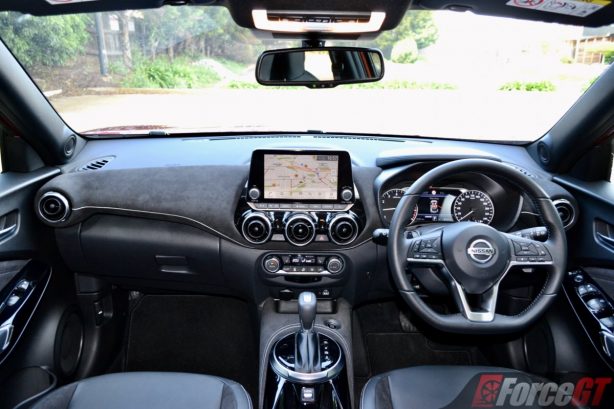 There’s substance to its style, too, as evident by the well laid out dashboard and good ergonomics. There’s also plenty of adjustments for the driver’s seat. Speaking of seating, Nissan makes some of the best seats in the business and this art is not forgotten even in a car as small as the Juke. The front pews offer plenty of support and contour nicely to the average-sized body, while the rear bench maintains comfortable cushioning across the three seats.

Heading to town with a bunch of mates? No worries. Passenger space is decent not just up the front but also in the rear. For a pint size SUV, there’s quite a lot of legroom on offer, though those longer in the legs may find headroom lacking. 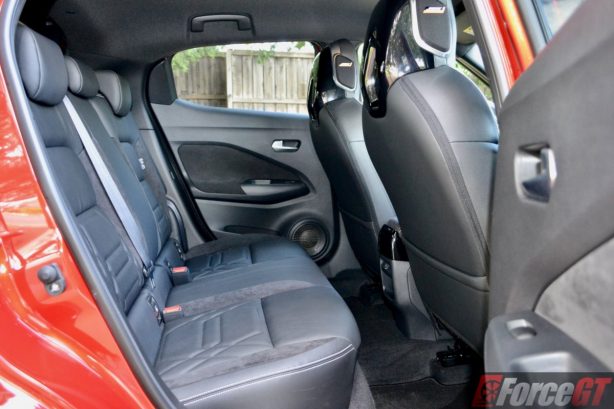 Storage compartments around the cabin are deep and usable, too, with large cup and bottle holders, thick door pockets and square glove box. The centre storage is a bit small though.

Further back, the boot offers a sizable 422 litres of capacity, expandable to 1305 litres with the rear seats tumbled. The space is larger than some mid-size hatchbacks or SUVs. And don’t think the tradeoff is the use of some sort of tyre repair kit as you do get a space saver spare tyre.

In terms of technology and connectivity, all variants get Apple CarPlay / Android Auto as standard through the 8-inch central touch screen display, with satellite navigation and DAB+ digital radio fitted from ST+ grade onwards. Audiophiles should definitely check out the top-spec Ti model with its punchy 8-speaker Bose premium audio. It includes speakers integrated into the driver and passenger headrests which prove to improve soundscape and surround sound. 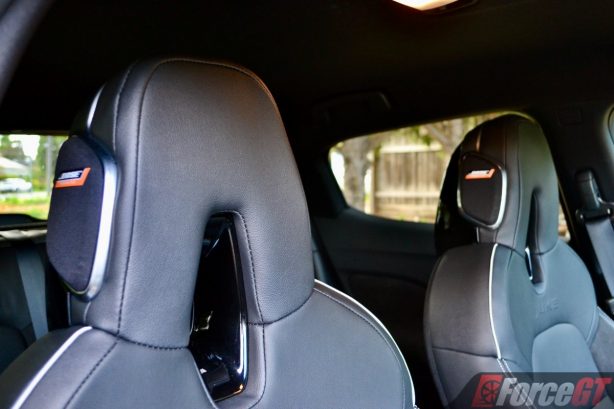 Powering the entire Juke range is a 1.0-litre turbocharged 3-cylinder engine co-developed by Nissan and Renault (as part of the Nissan-Renault alliance). Developing 84kW at 5250rpm, the boosted 3-pot may not look powerful on paper, but it’s backed by a decent 180Nm of torque that comes in at a relatively early 2400Nm.

There’s not much of a lag, and at full throttle it does gather pace quite quickly. But even when you’re just making it work half as hard, there’s good midrange torque to get you through most of what the daily grind whips up. 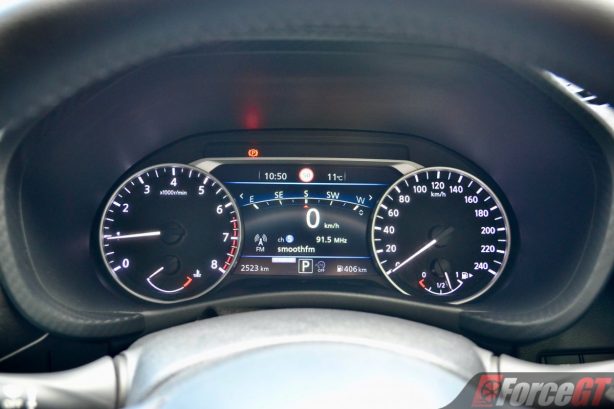 A triple isn’t usually the most refined and the Juke suffers the same trait. Naturally unbalanced, it just isn’t as smooth as a four-cylinder. The idle start-stop is best left off as it’s just not that discrete.

The 7-speed dual clutch automatic transmission shifts intelligently and snappily, but needs more polishing to iron out the jerkiness in stop and go urban traffic. The transition from drive to reverse and vice versa also has a long pause which can cause the car to roll in free gear.

Luckily, on cruise the Juke pulls along nicely with not much drama.

Riding on the same platform that underpins the Renault Clio and Captur, the Juke feels rigid and alert. Turn-in is sharp, response is good and body control is excellent. There’s plenty of grip too even though it drives just the front wheels. This small Nissan crossover is no doubt one of the better handling cars in class. 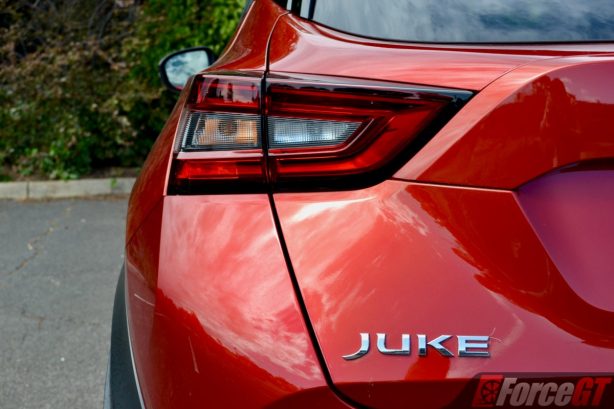 Despite the sporty dynamics, the Juke still manages to maintain comfort. Admittedly, the ride is firm but it never crashes badly on bumps and potholes. Our Ti rides on 19s but it still feels fairly forgiving.

Road noise is generally kept at bay but on rougher tarmac the thin tyres on our Ti can get vocal. Thicker rubber on lesser models should fare better.

The 3-cylinder turbo is amazingly economical on the freeway, zipping around 4.5L/100km on test. It isn’t too shabby around town, too, hovering at around 8.0L/100km. At the end of our week long test, the Juke returned a very respectable 7.1L/100km. Driven more sedately (which we didn’t) the Juke should be able get closer to its rated figure of 5.8L/100km. It does require RON95 premium unleaded fuel though.

The Juke’s service interval is longer than many rivals, only requiring a visit to the dealer every 20,000km or 12 months, whichever comes first.

In an increasingly saturated small crossover segment, the new Nissan Juke stands out with not just its cool looks but also a genuinely versatile cabin. Backed by adequate performance, neat handling and generous equipment, there’s quite a lot to like.

If the drivetrain’s rougher edges are smoothened out it’d be easily rubbing shoulders with the front runners.

Previous VW teams up with Walkinshaw for ‘ultimate’ Amarok W580
Next Spied: Toyota Yaris GRMN unleashed at the Nurburgring