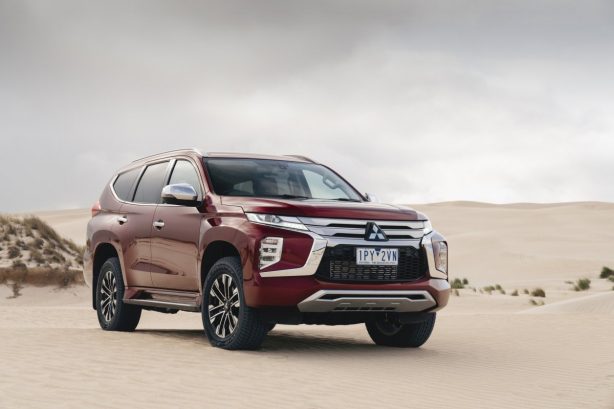 The current Mitsubishi Pajero Sport was launched in 2015 as a more comfortable and stylish SUV alternative to the Triton workhorse ute, while retaining its full suite of all-terrain capability.

Its lineage dates back to 1996 with the Mitsubishi Challenger. Like the Pajero Sport, it too, came with all the heavy-duty accoutrements that the Pajero badge is famous for.

2018 saw the addition of crucial safety equipment such as Forward Collision Mitigation (FCM) across the range, along with the addition of a five-seat version to the mid-spec GLS variant and updated interior trim.

Earlier this year, the Pajero Sport got its first major update to keep it fresh for another few years, including a fancy new digital instruments and the availability of a powered tailgate. 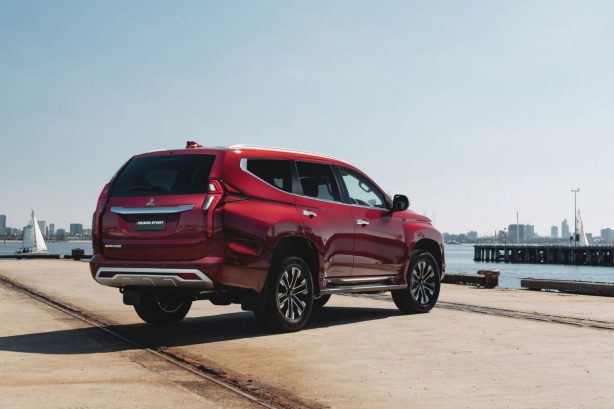 With just one engine and transmission on offer, the 2020 Mitsubishi Pajero Sport comes in three trim levels, kicking off with the GLX priced from $46,990 plus on-road costs.

Its entry-level status means you sacrifice on some of the features and premium finishes of the more expensive variants, as well as the 3rd-row of seats.

However, buyers would be pleased to know it’s not all poverty pack here. Things like an 8.0-inch touchscreen with Android Auto and Apple CarPlay (with basic 4-speakers) are standard across the range, along with Bluetooth connectivity and DAB+ digital radio.

On the outside, the facelifted Pajero Sport sees a further evolution of the brand’s Dynamic Shield front fascia that now makes the front look wider. The bonnet is set higher to give the front fascia a deeper look, while the chromed parts are bolder for a more refined appearance.

The SUV’s headlights are now full LEDs with the daytime running lights housed in the headlamp units.

Further down, the front bumper is home to the active cornering lamp, turn signal and front fog lamp, the latter – according to Mitsubishi – is positioned with consideration given to water damage when driving on flooded roads.

While not immediately apparent, the side step is now mounted higher for improved ground clearance during off-road driving.

Around the back, while the controversial vertical lighting has been retained, it is an all LED unit to lower power consumption and for longer life.

Rounding out the makeover are a fresh set of six twin-spoke, two-tone diamond-cut 18-inch alloy wheels that is said to give the Pajero Sport’s lower body a more “muscular” look. 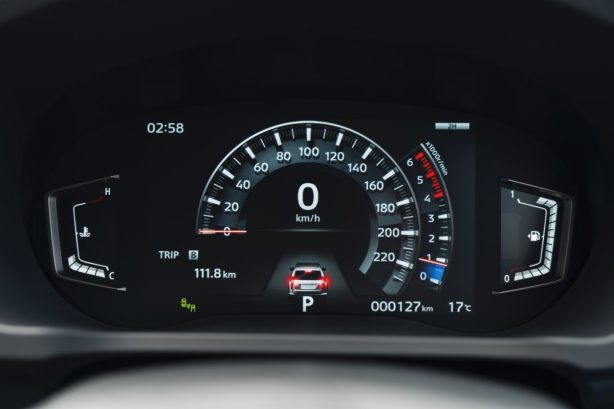 Inside, the Mitsubishi has made improvements to the interior comfort and utility, and it’s especially obvious in our range-topping Exceed.

All models now get a new 8.0-inch touchscreen but only the Exceed’s comes with embedded sat-nav, while the rest rely on Apple CarPlay/Android Auto for route guidance.

This is complemented by a new 8.0-inch colour LCD digital instrument cluster in the Exceed, which is customisable with three types of easy-to-read pre-set displays. Its graphics are up-to-the-minute and crisp and adds a dash of sophistication to the Pajero Sports’ otherwise relatively utilitarian interior. 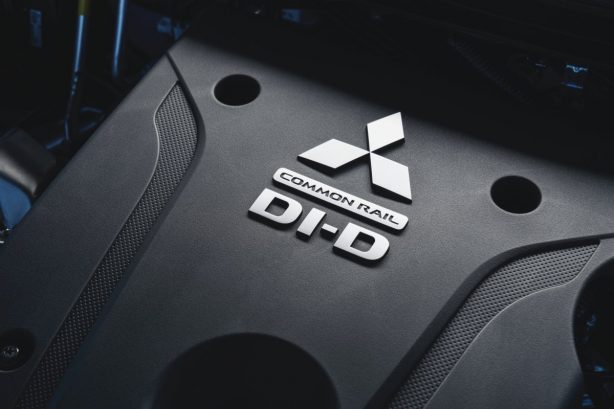 It’s an effortless engine, delivering its maximum torque at 2,500rpm to move the Pajero Sport’s two-tonne mass with surprising ease.

The eight-speed auto shifts with urgency and those who use their vehicle for towing will be pleased to know the Pajero Sport is capable of towing up to 3,100kg (braked).

Interestingly, and perhaps a remnant of Mitsubishi’s sporting past, the Pajero Sport is equipped with a pair of proper and perfectly positioned steering wheel paddles for those wanting a little more control over the transmission.

Combined fuel consumption is rated at 9.8L/100km which is pretty close to our on-test average of 10.0L/100km 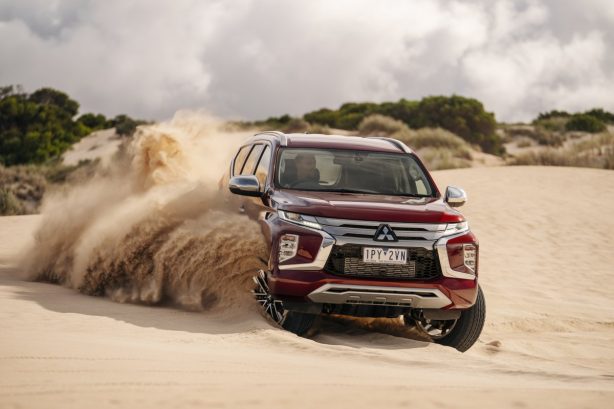 Due to the COVID-19 restrictions, the Pajero Sport Exceed spent most of its time on the tarmac during our weeklong test performing suburban shopping duties and the occasional trip to the hardware store.

However, we can attest to the Pajero Sport’s off road credentials as demonstrated in our previous test, which you can read here.

While it’s more truck-like to drive compared to car-based SUVs such as the Hyundai Santa Fe, with heavier steering and a more cumbersome character at anything close to the posted speed limit, it’s not all bad news.

In fact, the Pajero Sport is surprisingly at home in the urban jungle, with good all round visibility and large rear view mirrors that provide a good view of everything around the vehicle.

It may also feel heavy around corners, but its steering is light enough for ease of maneuvering around tight city streets and car parks, and the 360-degree camera in our Exceed makes parking a cinch.

If you’re looking for a more dynamic and fun drive, we recommend looking elsewhere as the Pajero Sport’s key strength is its off-road ability. 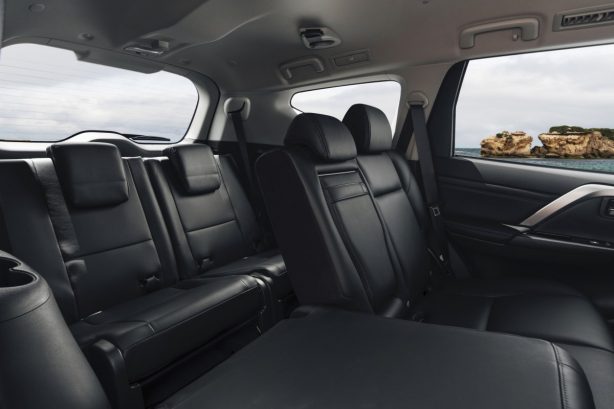 The Pajero Sport is roomy and relatively comfortable to ride in. Yes, it isn’t the quietest but it’s by no means noisy. The diesel engine can make its presence felt if you are in a hurry but general refinement is relatively good for a ute-based vehicle.

There’s plenty of room front and back for all passengers and a cavernous 673 litre boot for a weekend away for five. However, when the 3rd-row of seats are called into play, boot size reduces to a squeezy 131 litres. On the contrary, when all seats are folded, it expands to a massive 1,488 litres.

Its adaptive cruise control is also one of the better ones at being able to brake on down hill and maintain set speed without the risk of creeping over like some rivals such as the Toyota Kluger.

However, there is no lane departure warning although we think that might not be such a bad thing as they sometimes they are more of an annoyance than help; especially those with overzealous steering assist that steers you into traffic instead of away.

Its 8-speakers stereo is surprisingly punchy but the infotainment system is positively dated and the graphics on the Tom Tom sat-nav aren’t the best. The map also defaults to overview mode every time and requires a jab of the little arrow on the screen to get local view.

There are two USB points in the cabin along with a 150W outlet.

It’s also worth noting the Pajero Sport’s off-road prowess means it comes with a 218mm ground clearance, which makes entry and exit a bit of a climb for the vertically challenged and small children. Thank goodness for those side steps and grab handles, then.

Mitsubishi was one of the first to offer 5-years warranty on all its vehicles which has only now been matched by others. All new Mitsubishis also come with capped price servicing for the first three years, with the Pajero Sport costing $299 for each of its annual visit to the dealer.

The 2020 Mitsubishi Pajero Sport stands apart from its car-based rivals in combining family-hauling features with genuine off-road abilities. It feels equally at home in the urban jungle as it is in the bush.

Our Exceed isn’t cheap at $57,190 but you also get lots of kit for the money, including 7 seats and a powered tailgate.